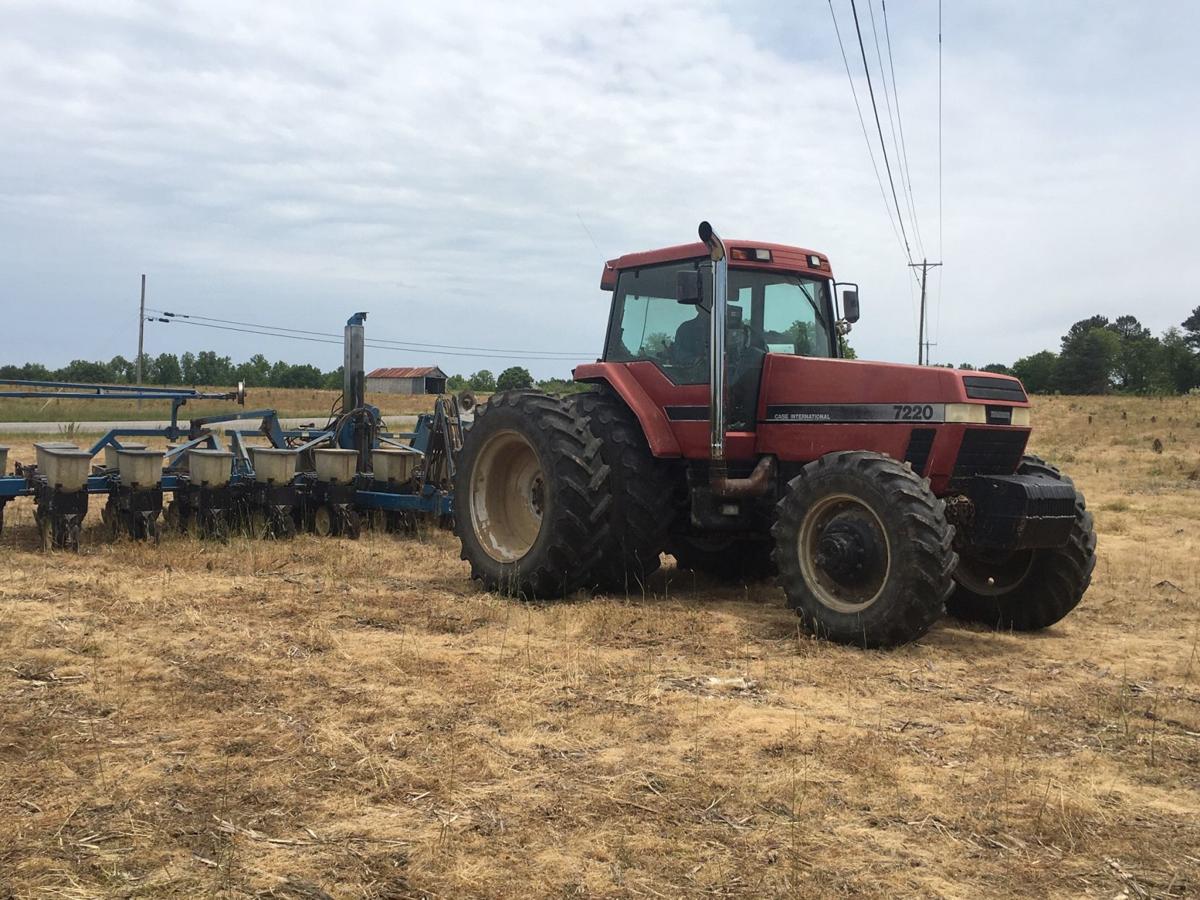 Mark Jones starts out with his first pass of soybean planting at Lawson's. He just installed a new GPS system in the tractor that tracks where he has planted the no-till crop. "I like to have never learned how to get the settings just right," Jones said of the new system. "I had to go to YouTube to figure it out." 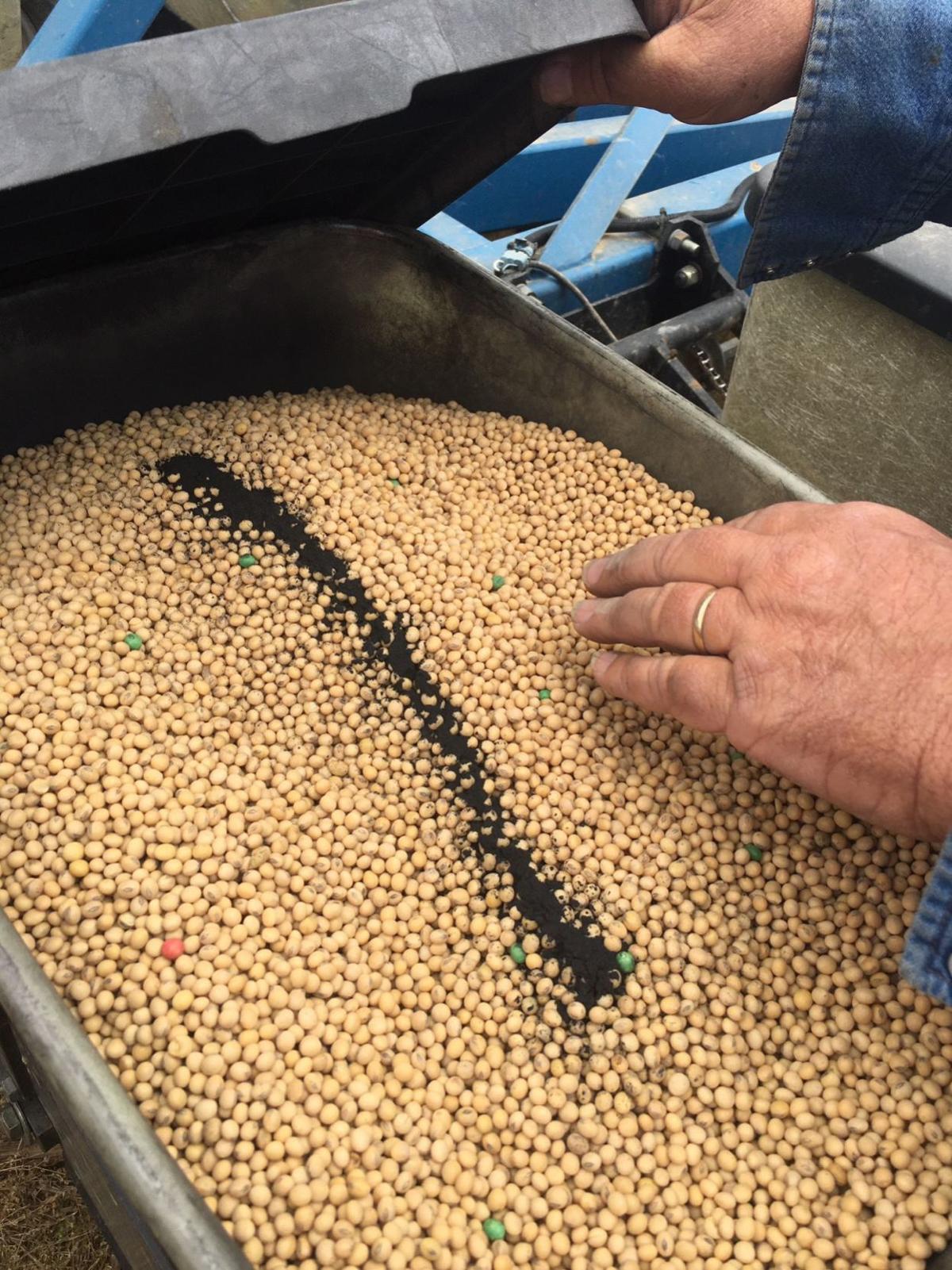 This is the full hopper of bean seed, waiting to be planted. 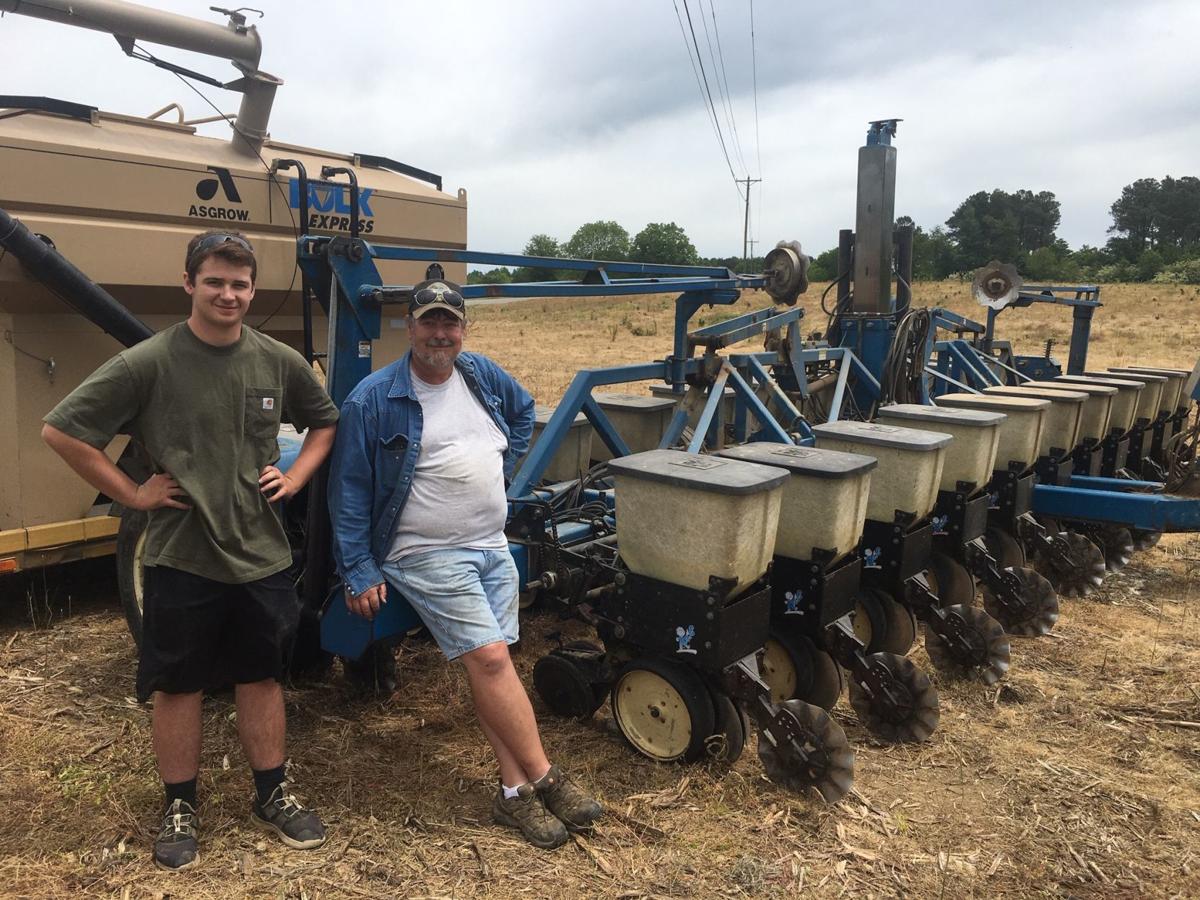 Son and father farmers Will and Mark Jones of Geraldine were busy planting a soybean crop at Richard Lawson's place at Pleasant Grove this week.

Mark Jones starts out with his first pass of soybean planting at Lawson's. He just installed a new GPS system in the tractor that tracks where he has planted the no-till crop. "I like to have never learned how to get the settings just right," Jones said of the new system. "I had to go to YouTube to figure it out."

This is the full hopper of bean seed, waiting to be planted.

Son and father farmers Will and Mark Jones of Geraldine were busy planting a soybean crop at Richard Lawson's place at Pleasant Grove this week.

It’s soybean planting season in Marshall County and Mark Jones was at Richard Lawson’s place near Pleasant Grove this week getting his crop in the ground.

The first order of business was taking care of a troublesome hopper on the planter. The hole in the hopper wasn’t lining up with the hole the beans were supposed to come down and go in the ground. Jones used a wrench, a power impact wrench and other tools.

“Get me the hammer, Will,” he then said to his son. The hammer is the tool of last resort for farmers just as it is for others.

One result of coronavirus shutting down the schools had been that Jones has had more help this spring. Will is is in the 9th grade at Geraldine High School. When school let out early due to virus, Will started helping his pop farm on a daily basis.

“I can tell you one thing,” Jones said. “COVID-19 has not shut us down. We’ve been going wide open for about a month, 7 days a week sometimes.”

If he could get a day off, he said he’d enjoy going fishing.

"We have been off a day or two and we have fished a little," Jones said.

Farming is Jones' sideline. His main business is trucking. It has been bad slow too. He mainly trucks equipment for poultry plants.

"The companies are not doing a lot of upgrades and the crews that install the equipment aren't wanting to go in the plants because of the situation," Jones said. "But it's starting to pick up a little."

We followed Jones and the corn crop he made on Lawson’s place last year. It was some more crop, averaging 176 bushels an acre. The standard farming practice is to rotate crops, so the field that held corn last year will hold beans this year.

Jones, who farms several pieces of ground in Marshall and DeKalb, planted 300 acres of corn earlier this year. He’s in the process of planting 300 or so acres of beans. After he harvests 300 acres of wheat, he will come back in the wheat fields and plant more late beans.

He uses no-till planting. The main prep is “burning down” the field with weed killer before planting the beans. Jones has a sprayer with a 90-foot boom that makes short work of the spraying.

“A 90-foot boom is just about perfect in this country,” Jones said. The hilliness of the topography prohibits use of a 120-foot boom. Jones knows a farmer who tried one.

“If you get on a hill, you could have one arm hitting a powerline and another hitting the ground,” he said. “You’ve got to be really careful when you unfold the wings on that sprayer.”

Jones knows a farmer who accidentally hit a powerline with an arm of a sprayer. It didn’t kill the man.

“It fried all of the electrical systems in the tractor,” Jones said. “They said it blew the tires off. The tractor was totaled.”

The wheat crop Jones has in other places is looking good. But it’s to the stage it really doesn’t need any more rain on it. Jones will begin picking wheat in June.

He said there’s enough moisture in the ground that the beans he was planting on Lawson’s place won’t require a rain to come up.

“I wouldn’t mind a shower on it, if it was a warm shower,” he said. “I don’t want any more of these cold rains.”

The drop in the price of oil is helping farmers. Jones bought off-road diesel at $1.39 a gallon.

“That’s the cheapest I’ve bought it since before Hurricane Katrina,” he said. Katrina was in 2005, some 15 years ago.

Jones said he’d always been told the price of nitrogen was tied to oil, but he hasn’t noticed a drop in price on that input this year.

The beans being planted on Lawson’s place will likely be harvested sometime in September. Jones will come back sometime during the growing season and spray for both insects and weeds.

If you’re a numbers person, Jones was seeding Lawson’s field at a rate of 140,000 seeds to the acre.

Like lots of other folks, Jones plants a home garden, not just his big crops. He planted it fairly early and it’s not doing good, he said. The cold, wet weather has hindered it.

He’s ready for good gardening weather just like everybody else.