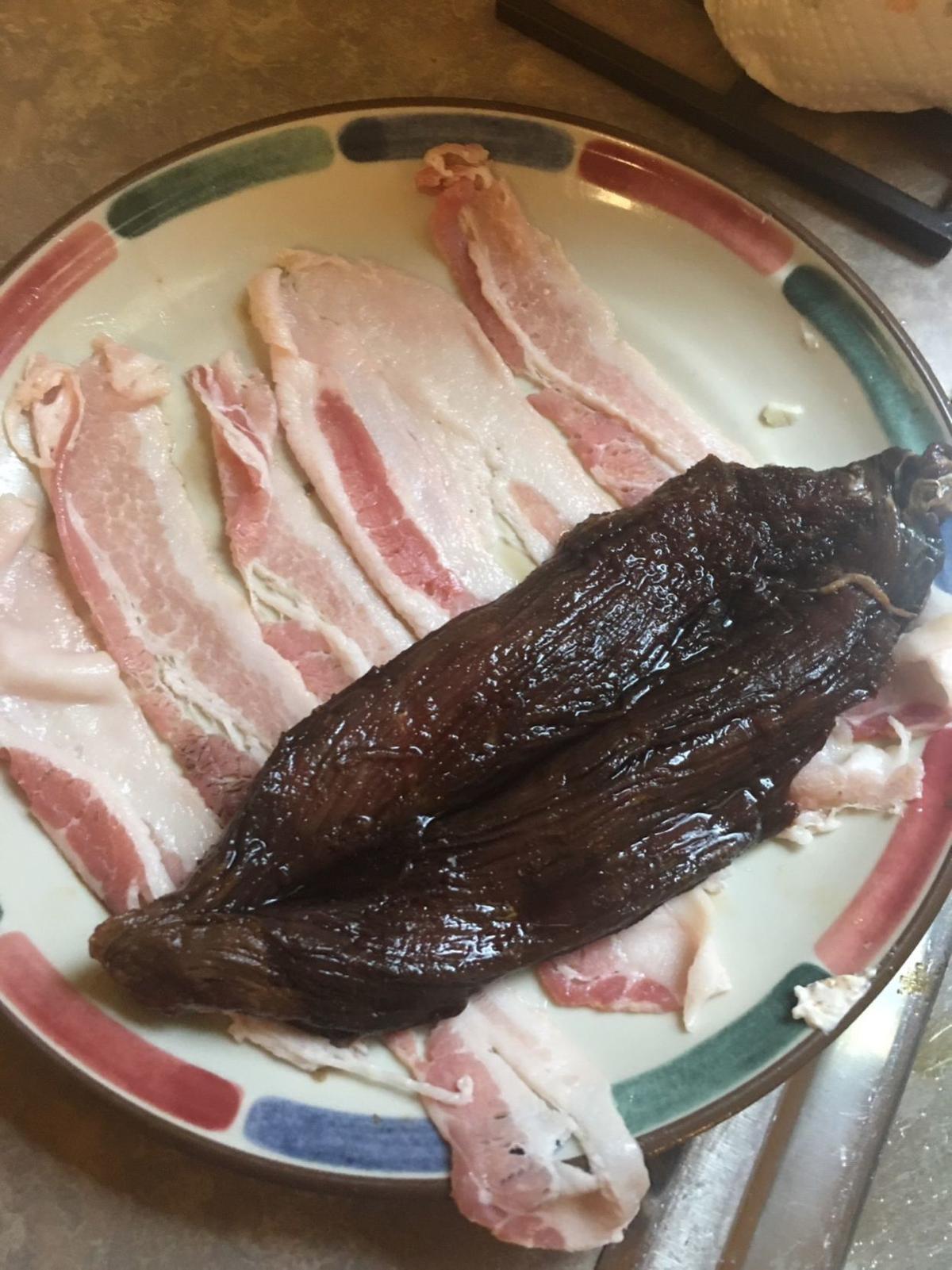 The first steps in prepared stuffed backstrap are to make a pocket for the stuffing, marinate the cut of meat, then place it on a bed of bacon. 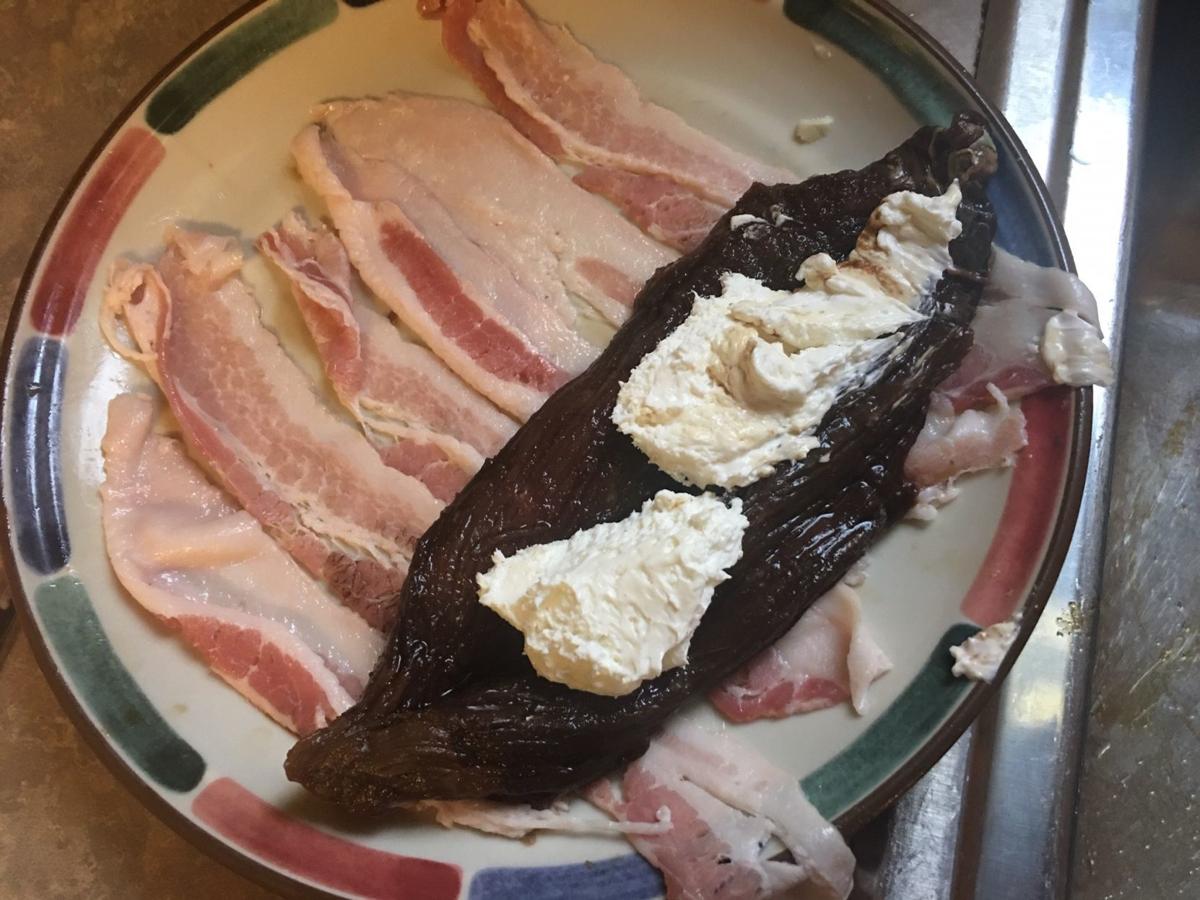 Cream cheese goes into the pocket. 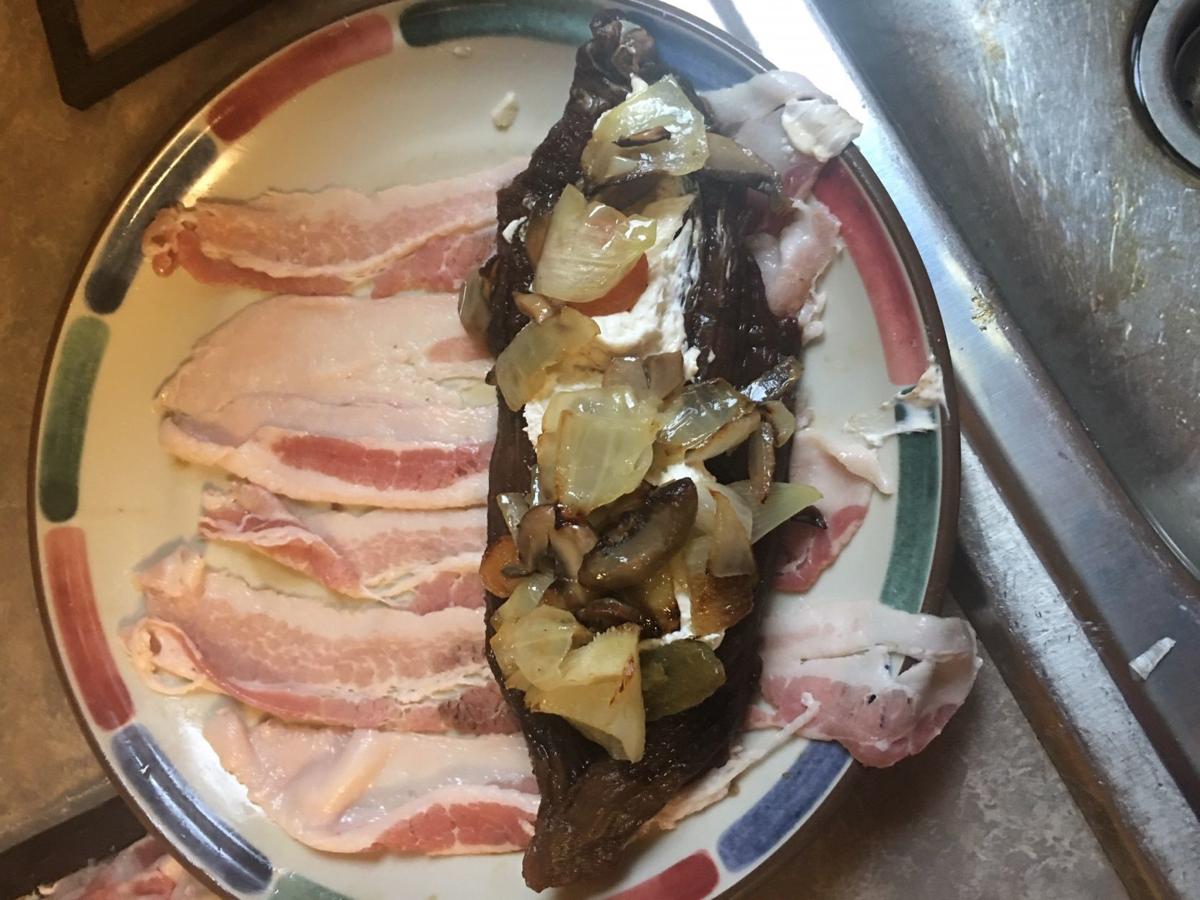 Sauteed onions, mushrooms and jalepenos go on top of the cream cheese before carefully rolling the backstrap in the bacon and placing it in a baking dish. 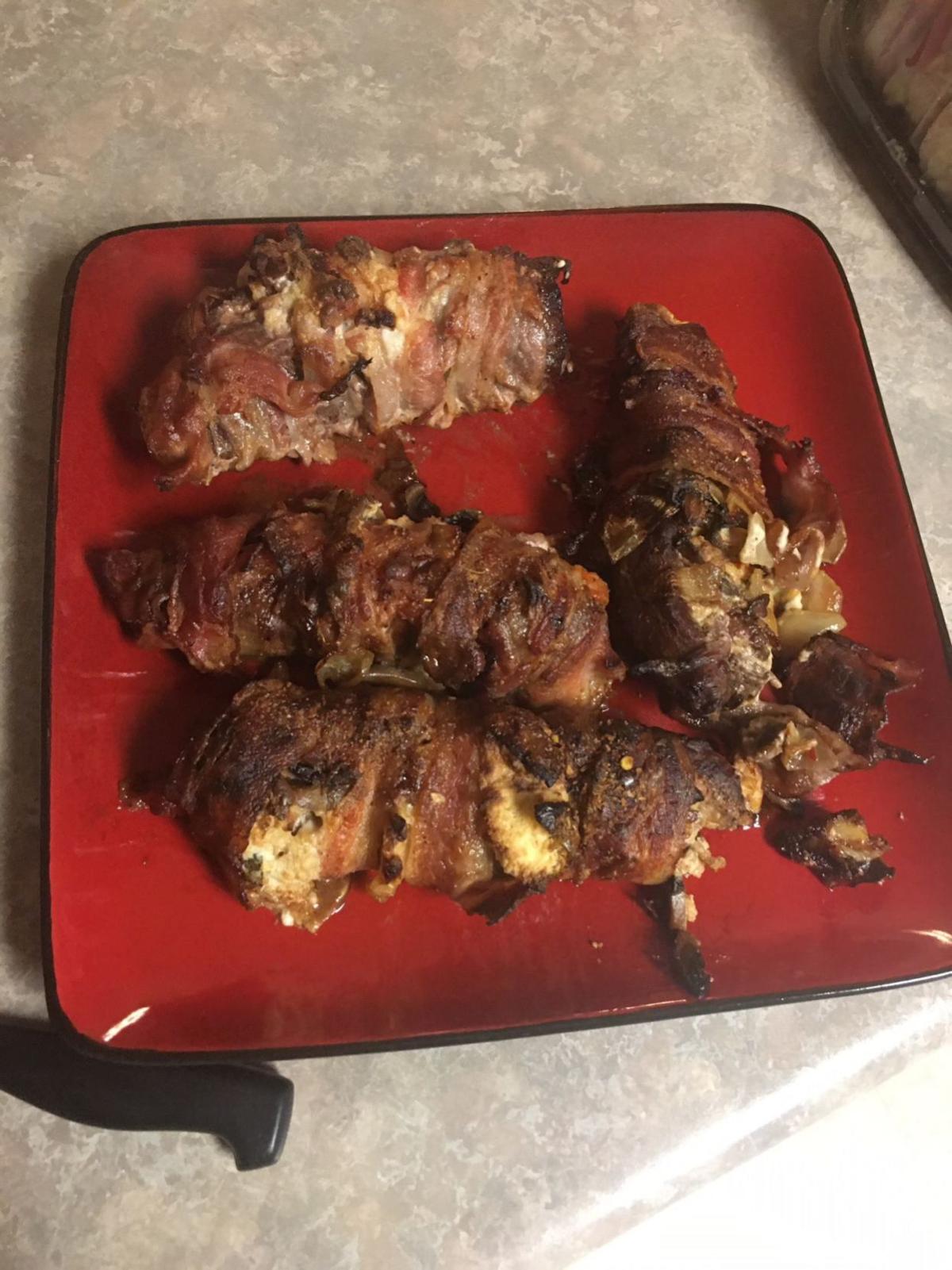 The finished dish of stuffed venison backstrap. You let it rest for a few minutes before slicing into one-inch steaks. 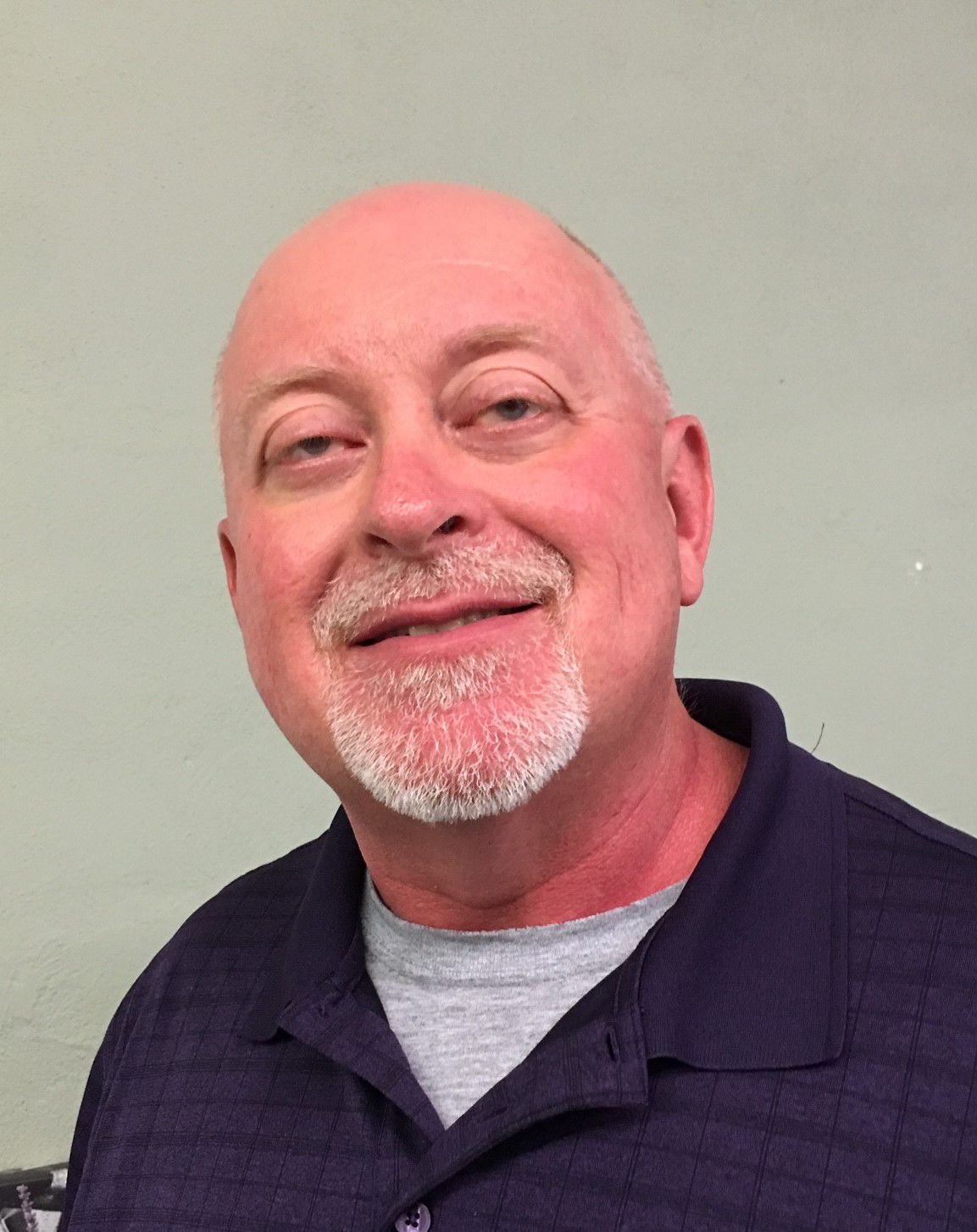 The first steps in prepared stuffed backstrap are to make a pocket for the stuffing, marinate the cut of meat, then place it on a bed of bacon.

Cream cheese goes into the pocket.

Sauteed onions, mushrooms and jalepenos go on top of the cream cheese before carefully rolling the backstrap in the bacon and placing it in a baking dish.

The finished dish of stuffed venison backstrap. You let it rest for a few minutes before slicing into one-inch steaks.

You got lucky and got a deer. Now what do you do with the thing?

That's a question lots of outdoorspeople may ask themselves. I've even asked it myself a few times. How can you turn that animal into the tastiest dish possible?

I just discovered my new "favorite deer recipe." But it's not a secret. Lots of people have been doing this for years apparently.

I got lucky and got a deer early in the season. Much of the hindquarters went into making jerky. I enjoy it and so does my son Kyle. It's labor intensive, but it's fun and tasty, so I make it.

But I'd been reading online about a recipe called "Stuffed Venison Backstrap." People who'd tried it raved. Than my pal Andy Beasley made it and told me how good it was.

My wife Mary's family, the Beardens, get together for Christmas every year and I often make a venison dish for the gathering. Past dishes have included Paula Deen's venison medallions with dill dipping sauce and venison bulgogi or Korean BBQ.

The backstrap is the long cut of meat that runs alongside each side of a deer's backbone. It's considered one of the choicest cuts of meat on the deer. While rummaging in the freezer, I also found a pair of inner tenderloins my brother had given me. They're a choice cut too so I stuffed them too.

Stuffed backstrap is really simple and beautiful. I thawed my meat, then cut my "pocket" for the stuffing. You don't want to cut through the meat, just slice deep enough to make a pocket for the stuffing to go into.

After making the pocket, I marinated my meat in Dale's for an hour or so.

I sauteed onions, mushrooms and jalapenos as I got ready to stuff my backstrap.

Raw bacon was laid out on a plate and my backstrap went atop the bacon. Cream cheese was loaded into the pocket, followed by the mixture of onions, mushrooms and jalapenos. The backstrap was then carefully rolled up in the bacon, placed in a tin-foiled lined pan and baked at 375 degrees for 30 minutes. Many game chefs use a smoker or a grill. My grill is a little rough and I don't own a smoker, so the oven it had to be.

After taking it out of the oven, you let it rest, then slice it in inch-thick steaks.

I suspected it would be good, but it turned out even better than I expected. I think everyone else enjoyed it too because little was left. My daughter Anna polished off the leftovers the next day while I was at work (I haven't forgiven her).

I'd also grilled venison steaks, "poppers" or steak bites with cream cheese and jalepenos in the center, and boudin, a Cajun-style venison sausage given to me by friend Mike Bearden.

More of the stuffed backstrap was eaten than any of the other dishes.

I've just got one problem now. Most of my venison is gone and I've been playing cat and mouse with a couple deer. They're there when I'm not and I'm there when they're not. I really need to catch up to one of them.

I almost caught up with one on a late afternoon after work last week but I hesitated, looking just a little too long, and it bounced into the woods. It was smallish anyway.

Andy Beasley said it best when I shared with him how much I enjoyed the backstrap and how I now need some more venison.

"You get a good recipe like that, it will make you want to kill another deer," he said.

Making sure your venison tastes good later in the kitchen starts with taking care of it in the field. For years and years, I did like everyone else and field dressed or gutted the deer and dragged the whole thing out. My back won't tolerate much dragging anymore and I've always thought field dressing was one of the nastiest things ever.

I now bone out my meat in the field. Again, Andy Beasley was my inspiration as he was the first I ever watched do it.

I've acquired a military Alice pack in case I need to pack one out. I drove the truck right up to my deer this year, boned it out and tossed the meat straight into a cooler.

Boning out a deer where it falls isn't that difficult. You split the hide along the backbone, remove the meat from one side of the deer, flip it, then remove the meet from the opposite side. It kind of made me feel primitive to dress one like that. I got in touch with my inner caveman.

I took another page from my friend Andy's playbook and "wet aged" the venison afterwards. It stayed on ice in the cooler for about a week. I would pour off any water daily and add fresh ice. Then after a week, I "worked it up" into cuts to use in the kitchen later.

There's some debate in the deer hunting community about wet aging vs. dry aging. But this venison was some of the tastiest, most tender that I've ever had and I'll be wet aging my next deer too.