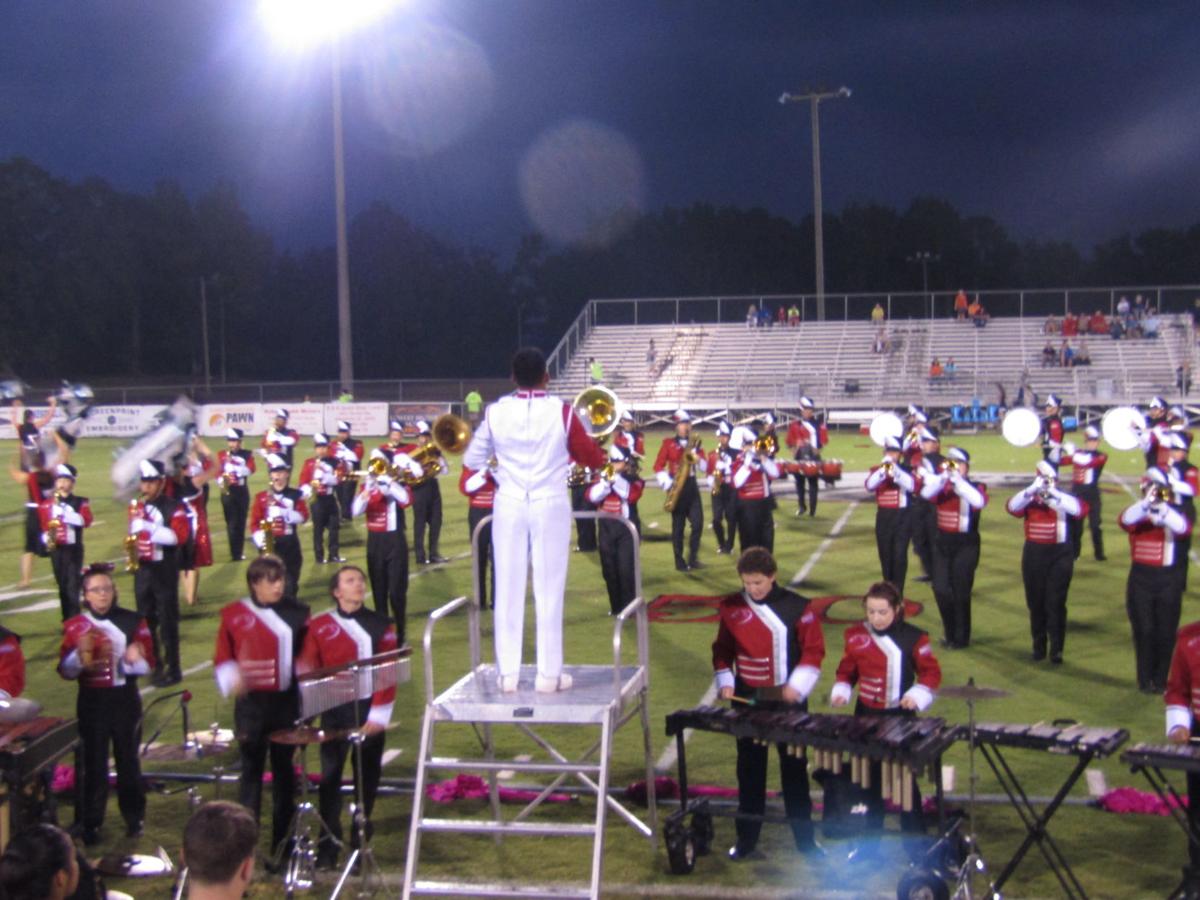 The Douglas Band showcased their new uniforms during their homecoming game. 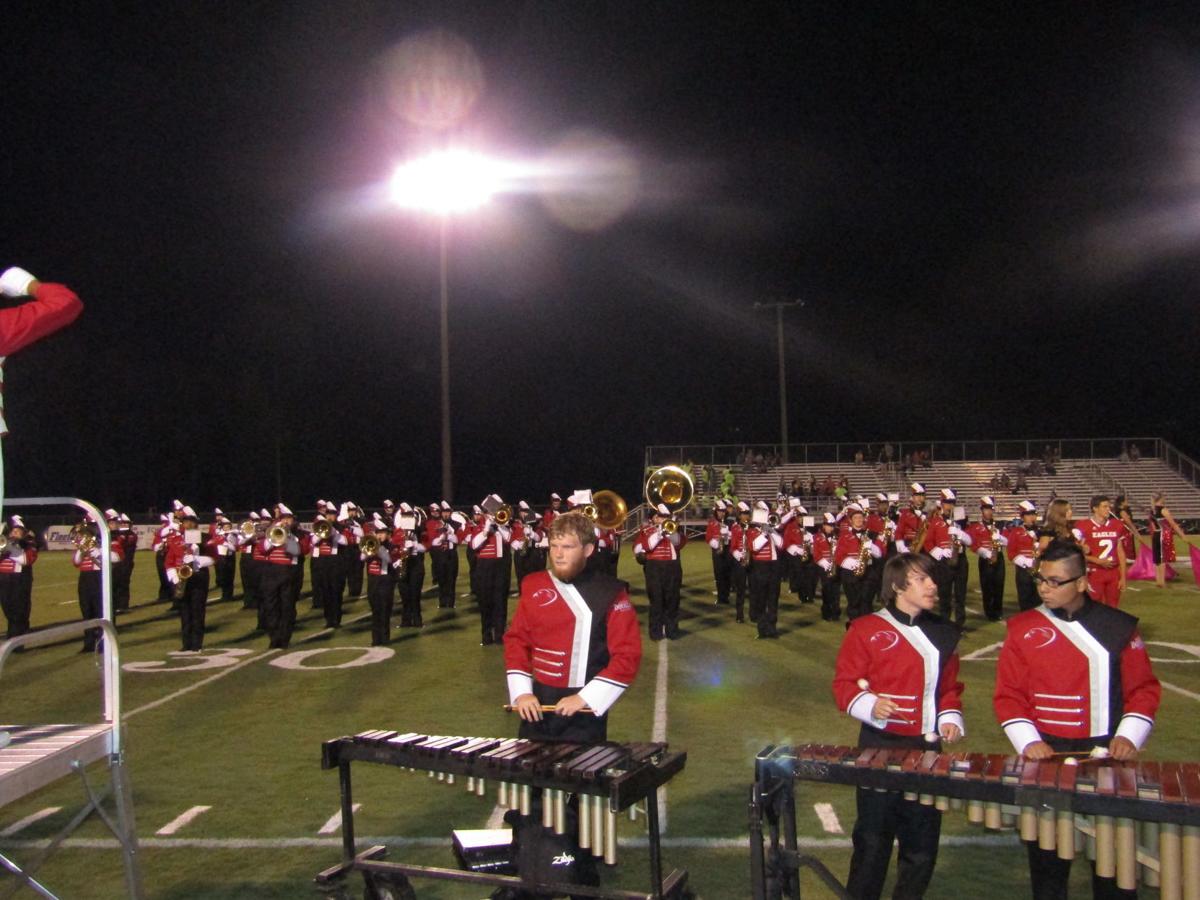 The Douglas Band was happy to take the field after a long weather delay.

The Douglas Band showcased their new uniforms during their homecoming game.

The Douglas Band was happy to take the field after a long weather delay.

On Friday, Sept. 27, Douglas High School was celebrating its Homecoming.  The long Friday started off at 7:35 a.m. for the band (when I say band, that is to include instrument carriers, auxiliary, runners and every member) at the band room to get their instruments and music ready to make the long trek across campus and the crosswalk-bridge to the football field.

It was an 8 a.m. call-time on the football field for Homecoming court practice. The morning was pretty warm but nice nonetheless. After the band and the Homecoming court participants (including teachers and staff) were all wrapped up, it was time to trek it back across the field, crosswalk-bridge, and campus back to the band room to reorganize for the next activity.

It was a 10:00 call-time for a school pep-walk.  The band, football team, cheerleaders, coaches, and our faithful band director walked (the band played their music) the entirety of the campus from Sloman Primary School (K-2), Douglas Elementary School (3-5), Douglas Middle School (6-8) and then through Douglas High School (9-12) to "PEP” up the school for the Homecoming game against Brindlee Mountain.  After the pep-walk, our dear Pride of Douglas Band returned to the band room to rest their instruments till it was time for the Homecoming parade.  The tired, sweaty, band members left the band room to go to class.

They spent 4th and 5th periods in their respective classrooms and ate lunch. After 5th period, it was time to return to the band room to once again reorganize and line-up for the parade. The temperature according to The Weather Channel was 91, with a heat index of 93.

However, on the asphalt of dear ol' Douglas, I can attest that it was much hotter.  At 2:15, the band, with their banner were leading the parade that started behind the campus at the Sloman Primary School driveway on Bethlehem road.  They marched and played beautifully from there down Highway 75, and turned up the road to the high school to return to the band room.

Finally, the long Friday school day was over, and it was time to go home.  The band had a new call-time for 5:15 p.m. to get ready for the Homecoming game.  Our amazing band returned to the school to dress in their brand-new marching uniforms that were made possible by a generous donation from band parent Joyce Appleby and fundraising.  The band had been waiting with bated breath to finally dress in their beautiful new uniforms, shakos, and 14-inch white plume, and the auxiliary in their new flowing uniforms for four games.  The band was ready to march, once again across campus and the crosswalk-bridge to Arthur Jarvis Stadium to perform a pre-game show for the fans at 6:40 p.m. If only it had been that smoothly executed.

You see, for some reason, the sky decided to water our very dry, parched dirt in Douglas, Alabama.  The sky opened up and rained, thundered and lightninged so hard that the dry ground could not absorb it fast enough.  The band, cheerleaders and the football teams retreated to the field houses to wait it out.  However, the Brindlee Mountain band and cheerleaders weren’t so lucky.  These musicians and cheerleaders were confined to their buses, not knowing when they would be released to return to the field.  The Pride of Douglas Marching Band went on at 7-ish to play their pregame show and National Anthem but immediately retreated to the visitor field house to wait out the lightning.

The kickoff time was moved several times due to rain and lightning delays, keeping players, band members, cheerleaders, coaches, teachers, students, staff and fans safe from being barbecued on the bleachers and field.  The rain and lightning finally moved away, and our Douglas band marched onto the field for Homecoming court.  The Homecoming representatives came down the field with their escorts and Amelia Higdon was crowned 2019 Homecoming Queen.

Ultimately deciding that the game and the show must go on, the Brindlee Mountain kids were finally released from their buses. Their band came out in their shorts and band shirts, with their instruments ready to breathe and play for their team and their school.  What an amazing band Brindlee Mountain has, full of patience and spirit for their team, fans, student body, and their parents.  They played with full gusto their fight song, stand tunes, and cheered on their team.

At half-time, when the football teams went back into the fieldhouses, and the bands would normally march their half-time shows, something different happened.  With the field being wet and muddy, the amazing Brindlee Mountain band played their show music from their place in the stands.  They did an amazing job and sounded great.  Not to outdo the Lions, our Douglas Eagles played two of their show songs and both bands were released to eat and congregate with a little bit of freedom. The football teams returned to play, and the bands did as well.  Many songs were played, and cheers cheered for the remainder of the game that ended well into the late night.

After the game, the teams shook hands, prayed together, and our Douglas Eagles lined up for the Alma Mater.  Our band played the Alma Mater and the fight song after, just like any normal game, but this next part is what this whole story is all about.

As the Brindlee Mountain band came down from their spots in the visitors section and lined up to go to their buses, our Douglas Eagle band did the most moving thing.  They cheered on that Brindlee Mountain band till they loaded their buses.  You see, that is the spirit of sportsmanship or musicianship or the spirit of a school.  A disastrous, stormy, sweaty Friday night that lasted for hours and hours ended in a perfect cheer. A cheer from musicians that know what it is like to sit on that hot, sweaty bus not knowing their fate.

Friday night lights are not just about a football game or the football teams that are playing it. It's not just about the beautiful cheerleaders yelling and cheering on those teams.  It is also about a band that has worked hard all summer to give you an excellent show, with precision marching, and complicatedly memorized music.  It is about the love of the season, the game, and show.

What our Pride of Douglas Marching Band did for that tired Brindlee Mountain Marching Band was heart touching.  After a very long, hot, wet day that started at 7:35 in the morning these kids knew the importance of cheering on someone else. The leadership of our band director, Jesse Tiner has rubbed off on every member of our band.  I am very proud to say that my son spends hours and hours with Mr. Tiner and his band family.  He is learning things that he could not learn anywhere else.  The Pride of Douglas Marching Band is a family that is growing not only in numbers but in human quality.

So, on Friday night when you are cheering on your football team, remember the band.  Stop and watch them at half-time and show them, your classmates, that you support and appreciate all of their hard work.  Let them know that it does not go unnoticed. Thank you, Douglas band, for making me #ProudToBeADouglasEagle.