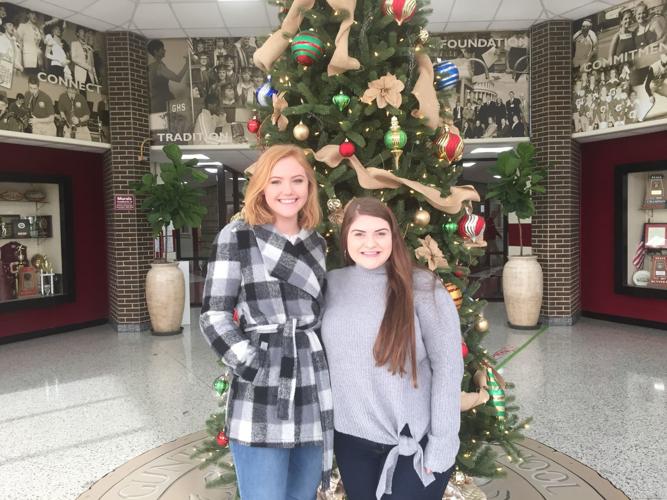 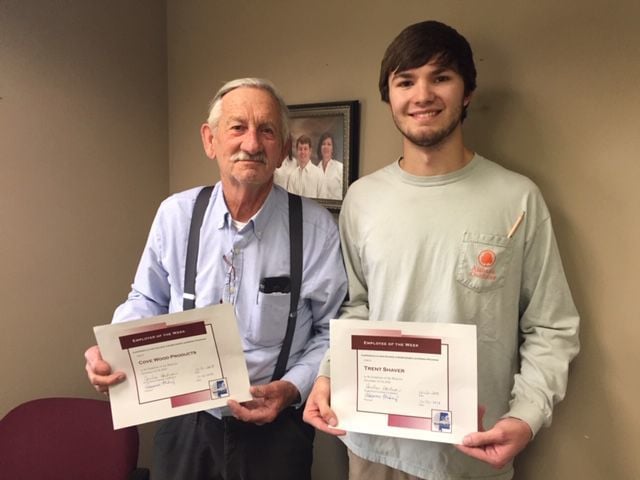 Trent Shaver is pictured with Jimmy Page, his supervisor and owner of Cove Wood Products.

Trent Shaver is pictured with Jimmy Page, his supervisor and owner of Cove Wood Products.

By Maggie Beth Ragsdale and Will Marsh

Will Marsh, a junior at GHS, has predicted which teams will win this week in the NCAA Football games. He predicted that Florida will defeat Michigan. South Carolina will lose to Virginia. Arkansas State will win against Nevada. Notre Dame will be victorious against Clemson. Stanford will be defeated by Pittsburgh. Cincinnati will suffer a loss to Virginia Tech. Michigan State will triumph Oregon. Alabama will attain a win against Oklahoma.

Seniors who are in the spotlight this week are Hannah Lindblad and Alyssa Townson.

Activities she has participated in during high school are FBLA, Anchor Club, HOSA, Journalism, Co-Op, NHS, SNHS and ODK. She is also the current the HOSA President and the current NHS Secretary.

Her favorite school memory was her senior pep rally because it was “so sweet to see everyone come together.” Hannah plans to become a nurse practitioner after graduation and her life’s biggest dream is to be happy and positively inspire the lives of others.

Words of wisdom she has for underclassmen are, “Do more than what’s asked of you. Leave here with purpose.” Hannah describes herself as “outgoing,” and her proudest moment was becoming an aunt to her nephew Atchley.

The @name she’s selected for an administrator is for Mrs. Hornbuckle: @djbornhuckle. Something that few people know about Hannah is that she cannot ride a bike, and the most creative excuse she’s used to get out of homework was that one of her family members was sick.

Even though she’s afraid of heights, she wants to skydive before she dies. Her hidden talent is tongue popping.

Alyssa Townson’s parents are Gary and Kelly Townson, and her siblings are Brad Townson, 31, and Colby Townson, 23.

Alyssa doesn’t have a favorite teacher and has loved every one she has had over the past four years.

Her favorite memory was at a HOSA competition in her junior year. She and Hannah Lindblad stayed up the whole night studying and laughing.

She plans to go to UAB, get a BSN, and then go back to become a Women’s Health Nurse Practitioner.

Her life’s biggest dream is to be happy in everything she does, and her words of wisdom to underclassmen are, “What you do now matters. Work hard to reach your goals.” Alyssa describes herself as charismatic, and her @name for an administrator is Braz@emotionlessmuscle.

She describes senioritis as “not having the will to move from my bed in the morning.” She would like to hike to Machu Picchu before she dies, and something that few people know about her is that she used to be a ballerina.

Our Guntersville basketball teams played Albertville on Tuesday and Brewer on Thursday.

The varsity boys won against Albertville and the girls played their hearts out but came up short.

Guntersville hosts Southside this Saturday, December 15, so come out and support GHS basketball.

Our GHS Indoor Track team has started to practice, so be on the lookout for those students training both inside and outside of the school- rain or shine!

Employee of the Week

The Work-Based Learning (WBL) program at Guntersville High School announces that Trent Shaver has been selected as the "Employee of the Week."

Trent works for Cove Wood Products (TruForm) in Grant. He is pictured with the owner, and his supervisor, Jimmy Page.

The WBL program expresses appreciation to Cove Wood Products for being a supporter of the program. This business has been selected as the "Employer of the Week."