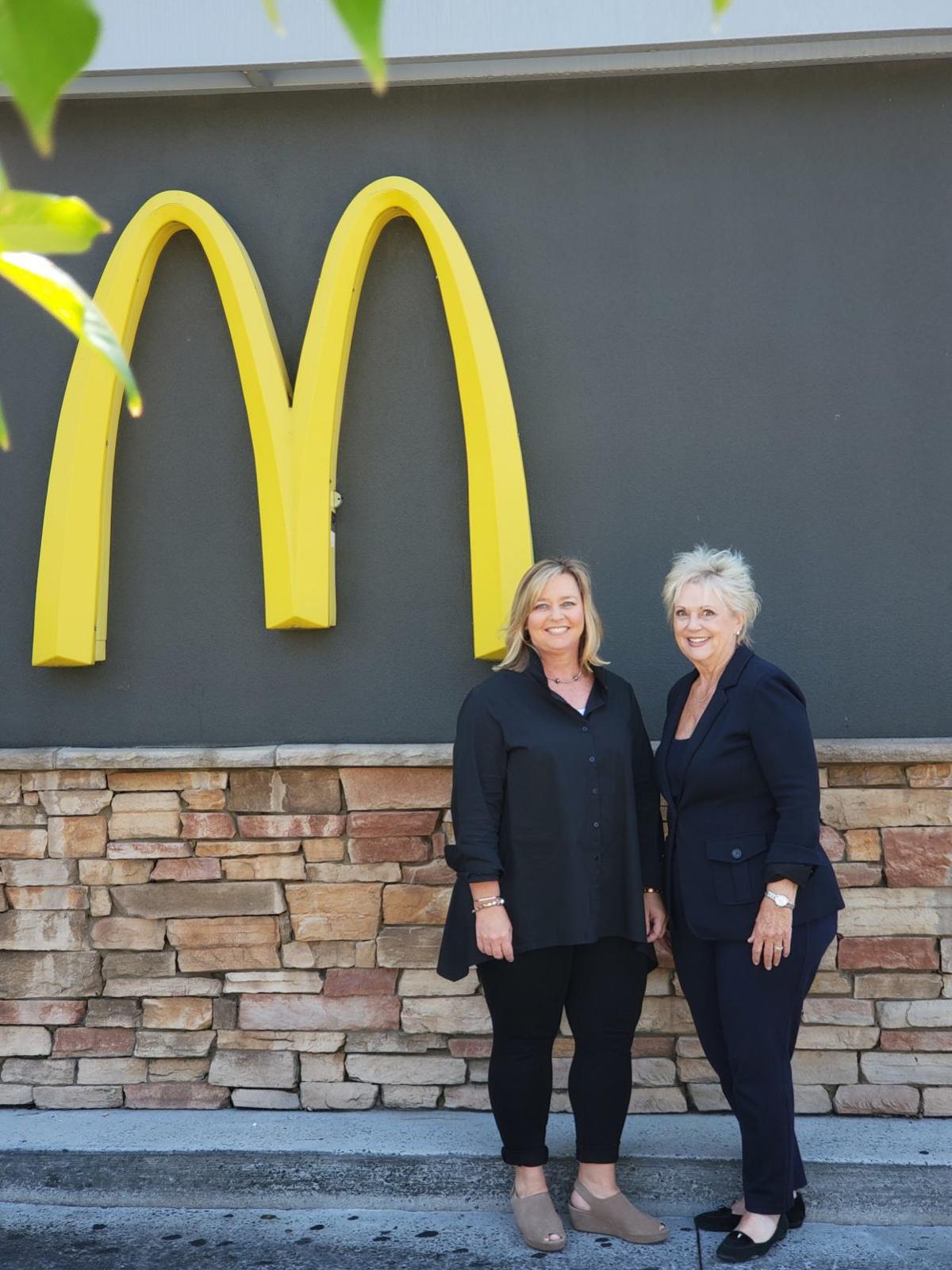 Christie Bruce (left) and Charlotte Dutton are the mother/daughter owner operators of McDonald's in Guntersville, Alberville, Boaz and Scottsboro. 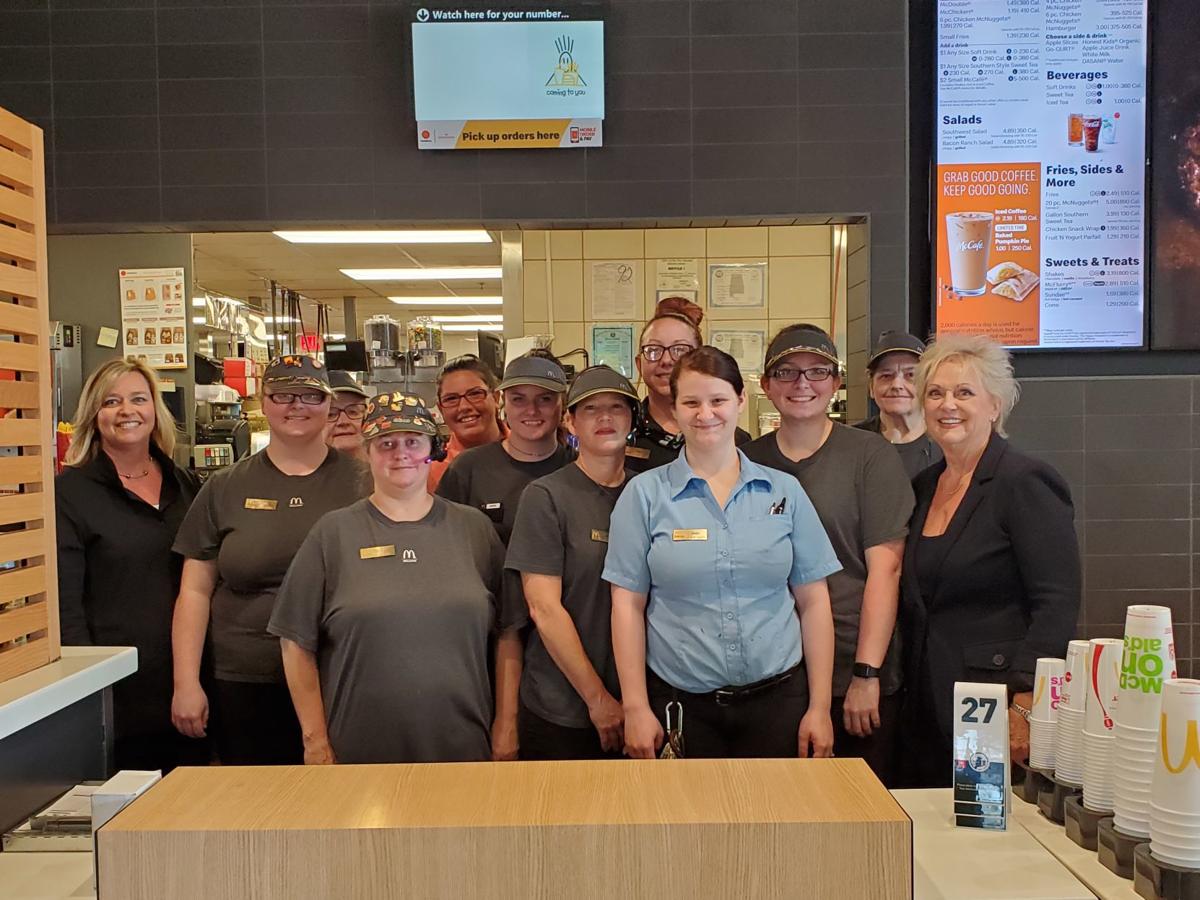 Christie Bruce (left) and Charlotte Dutton are the mother/daughter owner operators of McDonald's in Guntersville, Alberville, Boaz and Scottsboro.

Charlotte Dutton and Christie Bruce have "ketchup running in their blood" and each one says “I’m lovin’ it!”

These women are a mother/daughter team who are owner/operators of the McDonald’s franchises in Guntersville, Albertville, Boaz and Scottsboro, along with the family patriarch Ron Dutton.

The McDonald's in Guntersville has been in business for 40 years. The business was opened in April 1979. Dutton said the McDonald’s Corporation offered them sites that they turned down.  After visiting Guntersville and talking with Home Bank president Jim Kimsey, the family thought it would be a great location to open a business and raise a family.

Dutton started with the McDonald's Corporation in the Atlanta Region in 1972 in operations administration and in 1974 went into the Human Resources Department. She and her husband, Ronnie, were transferred to Augusta, Georgia, in 1977, where both worked for the corporation.

Dutton said she was introduced to the McDonald’s Corporation by a high school friend, Becky Sharp. Dutton was looking for something to do. Sharp worked for the corporation and said the office was moving to a new building. Sharp asked her to come and answer the phones while the employees moved.

“That’s how it all started and it became something that I fell in love with,” she said.

The first location they opened was Guntersville, then Albertville and Boaz. They bought Scottsboro from a retiring operator.

In the ‘70s, few women were in the operations part of the corporation. After moving to Augusta in late 1977, Dutton said she decided to train in one of the restaurants in their neighborhood. She was looking for something more than what she was doing. Ronnie was the operations director of the Augusta region at that time and once she found out she enjoyed running a restaurant, they decided to pursue it.

Dutton served as the co-op treasurer and was on numerous committees for the corporation. In 1989, Fred Turner, President of McDonald’s Corporation, challenged a few women operators to help plan how to bring more women into the McDonald’s system.  An organization called Women’s Operators Network (WON) was started and she became very involved.

For the women in the program, the idea was to get them approved to become operators. You cannot just decide to become a McDonald’s operator and go buy a restaurant. A lot of training is involved. Her daughter, Christie Bruce, went through this process called the Second-Generation Training Program.

Dutton said at that time there were more men operators. Once the organization started researching performance of the restaurants, they found women operators to be very capable.

For a female looking into becoming a successful business owner, Dutton said you need to make sure you are fully committed and that it's what you want. The service industry is very hard and difficult, and you have got to love it.

One of the advantages to owning your own business, Dutton feels, is she was always able to attend her daughter's school activities.

Bruce has a degree in dietetics with a minor in management from the University of Alabama. As a registered dietitian, her strength is in food safety. It's a strong point to her work with McDonald's.

“Our success is truly based on the support of the communities we service and our restaurant teams," Dutton said. "Without their support, we would never have had the success in all four of our communities.”

They have approximately 225 employees with four long term general managers.  Jeff Dyar at Boaz has almost 31 years, Gena Luther at Scottsboro has 26 years, Steve Kilgore at Albertville has 18 years and Tim Finley in Guntersville has almost 10 years. These four managers started as part-time crew and/or teenagers and moved to the positions they now hold. Their office assistant, Kim Hollingsworth, has been with the company for 34 years.

As an operator, Dutton has been involved in the community. Currently, she serves on the BancorpSouth board of directors, the City Cemetery Board, is active with the Chamber of Commerce and she co-teaches with Margaret Livingston a Sunday school class of 4th and5 th grade boys at First Baptist Church in Guntersville. She has been active with the Red Cross, the Rec Board and others.

While Bruce was in college, she completed an internship with dietitian Janet Helm in Chicago at McDonald’s Corporation.  At the time of her internship, McDonald’s was looking at healthier options on their menu.  Helm and Bruce did a lot of taste testing and photoshoots for advertising. It was long days making sure everything was just right.

After graduation, Bruce worked for the Marshall County Health Department in the Women, Infant, and Children (WIC) nutrition program. She was the WIC coordinator for three years.   In 1996 she decided to return to McDonald’s.

Bruce started working with Gena at the Guntersville location. Within 18 months, she had gone through the second-generation process and been approved. She said while she was going through the program, she had many corporate people coming in at different times, checking her work.

She said the requirements were like going to school. Bruce would work at the restaurant during the day, but she also had a lot of book work she had to compete at night. She had classes to attend in Nashville every few months and the last class was a week and a half at Hamburger University in Chicago.

After graduating from Hamburger University, she became a general manager at the Albertville McDonald’s to manage and learn the operations in a different location.  She was soon approved by Ted Lyons, the Nashville regional manager.  Bruce said her current day-to-day job is working with the general managers in training, food safety and the day-to-day operations.

Dutton said part of their success is also contributed to their daily presence in the restaurants.

"We are not absentee owners and are very active in every part of the business," she said.

Dutton recommends that anyone interested in getting into the restaurant business find a good mentor.

Bruce and her husband, Brad, have three children, Caroline, Paul and John. All three children started working at McDonald’s while in high school.  She said it is great to have them come home after work and tell her stories about their experiences at McDonald’s. They are learning the business and working with the public. She believes working has a positive impact.

The training program at McDonald’s is one of the best programs in the industry, Bruce said. She knows that whatever paths her sons choose, that program will help them be better people. Her daughter is finishing up her last year at Samford University as a pharmacy student. Paul is a junior and John is a sophomore at Guntersville High School.

Having three children, she has been extremely busy in her personal life. Bruce is the past treasurer of the GHS Athletic Booster Club, is currently on the Marshall Women’s Guild, an ambassador of the Chamber of Commerce and a volunteer at the Wildcat Pantry.

“Running a profitable restaurant with gold standards for customers and employees along with supporting the local community” is what these women do as part of their business.