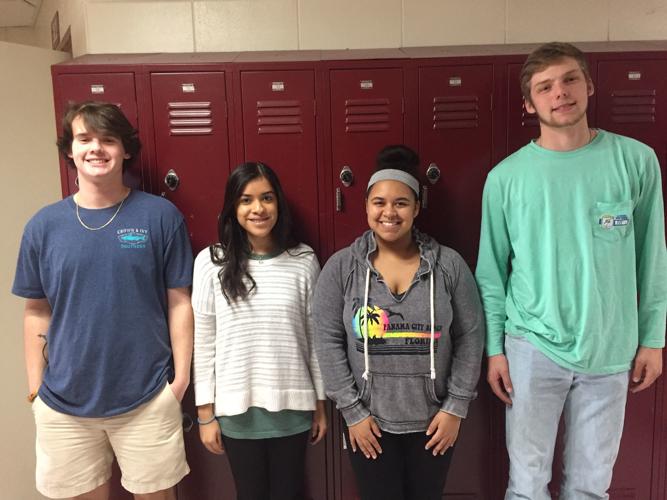 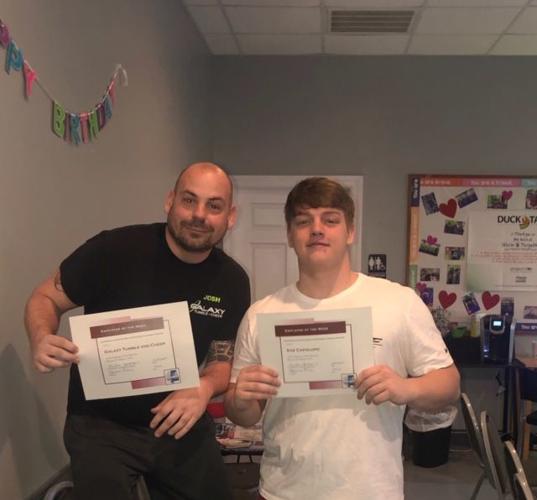 Kye Capolupo (right) is pictured with his supervisor, Josh Medlin, and they are Guntersville High's employee and employer of the week.

Kye Capolupo (right) is pictured with his supervisor, Josh Medlin, and they are Guntersville High's employee and employer of the week.

The seniors who are in the spotlight this week are Reid Mann, Citlalli Valentin-Saavedra, Jaycee Wills and Rylee Shell.

Reid’s mother is Tammy Mann, and he’s involved in football, archery, fishing and hunting. His favorite teacher was Mrs. Jennifer Rhoden because she was “an amazing teacher, and he learned a lot from her.”

After he graduates high school, Reid plans to attend Wallace State for 2 years and become a welder. His life’s biggest dream is to “be successful,” and his words of wisdom to underclassmen are “have fun while you can.”

Reid’s greatest life accomplishment is to be a certified welder, and he describes himself as “optimistic.” His @name for Coach Latta is @JimmyP.

On the subject of senioritis, Reid says, “It’s rough; you just think about graduating and not wanting to do anything but graduate.”

Reid also wants to go skydiving before he dies.

Her favorite teacher was Mrs. Rhoden because “she cared for every one of her students.” Citlalli’s favorite school memory was the day they won Best in Class Dance Line in 2016, and she plans to attend college after graduation.

Her life’s biggest dream is to “be successful,” and her words of wisdom to underclassmen are “don’t give up too early.”

Her biggest life accomplishment has been winning Best in Class Dance Line. Citlalli describes herself as “dedicated,” and something few people know about her is that she doesn’t have a middle name.

The most creative excuses she’s given for getting out of homework are “I forgot to do it” and “I left it at home.”

When asked to describe senioritis, she said, “You see the finish line, and you are a few steps away.”

Citlalli wants to go skydiving before she dies, and she has a dog that she loves named Charming.

Jaycee is involved in work-based learning, and her favorite teachers at GHS are Mrs. Brown and Mrs. Hornbuckle because they have “been her backbones through the years, and they have always been there for her and kept their faith in her.” Her other favorite teacher is Mrs. McCoy because “she’s crazy and goofy and keeps it real 24/7.”

Jaycee’s favorite school memory was when she sneezed in the cafeteria and everyone in the room said “Bless you,” and then her friend texted her later, saying, “That was you, wasn’t it?”

Jaycee plans to go to college in Texas after graduation, but she doesn’t know what she wants to study yet, as she just “goes with the flow.”

Jaycee’s biggest life dream is to be well-known through her writing, and she also wants to give everyone in the world a hug and meet Kehlani. Her words of wisdom to underclassmen are “Focus on yourself this year, and take it seriously! Also, take days off if you need them. It’s stressful, and it’s okay!”

Her biggest life accomplishment has been finding herself and being comfortable with who she is, and she describes herself as “exquisite.” Her @name for Mrs. McCoy is @crazy_english_lady, and something that few people know about her is that she can wiggle her ears.

She doesn’t have an excuse for getting out of homework because she “just doesn’t do it,” and she describes senioritis as “Waking up in the morning and immediately saying ‘Nope, not today’ to yourself.” Jaycee would also like to skydive before she dies.

His favorite teacher is Mr. Smith because “he has taught me so much stuff,” and his favorite school memory was when he got out of school and got to go fish for a fishing tournament. He plans to own his own business after graduation, and his life’s biggest dream is “being a professional fisherman.”

His words of wisdom to underclassmen are “Pay attention in class,” and his biggest life accomplishment has been completing his Tech School credentials.

Rylee describes himself as “quiet,” and his @name for Coach Tuggle is @Tugs. Something not many people know about him is that he struggles in math, and his most creative excuse for getting out of homework is that he left it at home.

Rylee describes senioritis as “it hits you that it’s your last year of high school, and you don’t wanna do nothing,” and he would like to go skydiving before he dies.

Employee of the Week

The Work-Based Learning (WBL) program at Guntersville High School announces that Kye Capolupo has been selected as the "Employee of the Week."

If you haven’t had the opportunity before today, come out to GHS tonight (Saturday)to see the play Seussical and support our students. It has two shows today, 2 p.m. and 7 p.m. at the GHS Auditorium. Admission is $5.