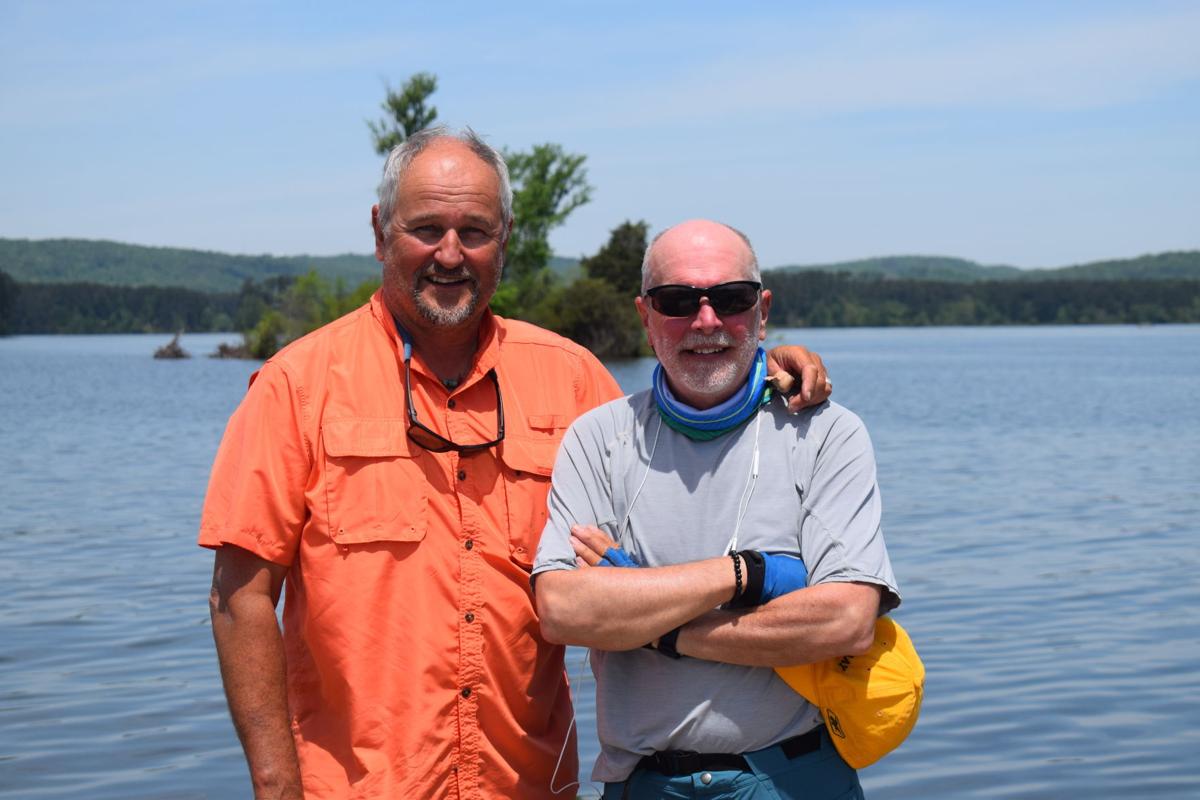 Jon (left) and Jeff Wunrow are in the middle of kayaking the entire Tennessee River. The cousins made a stop in Guntersville last week. 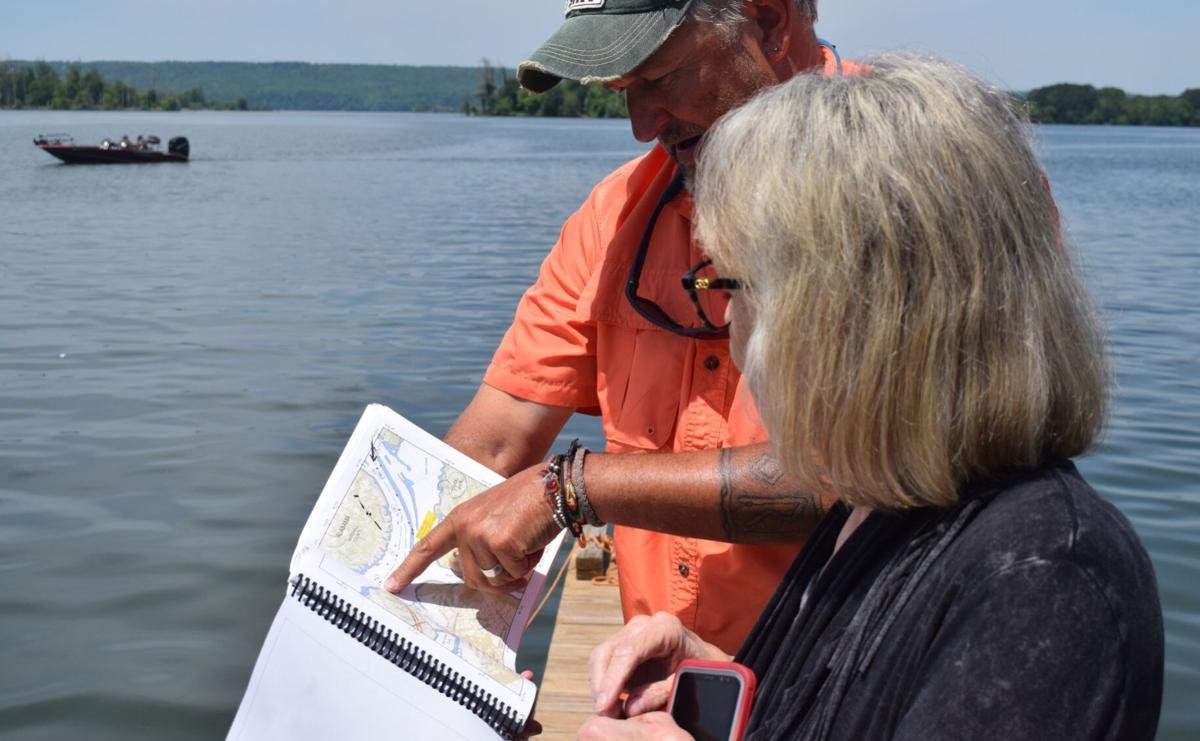 Milla Sachs of the mayor's office met the two kayakers Monday morning before they left Guntersville. Jon showed Sachs a Corps of Engineers map they're using to navigate the river. 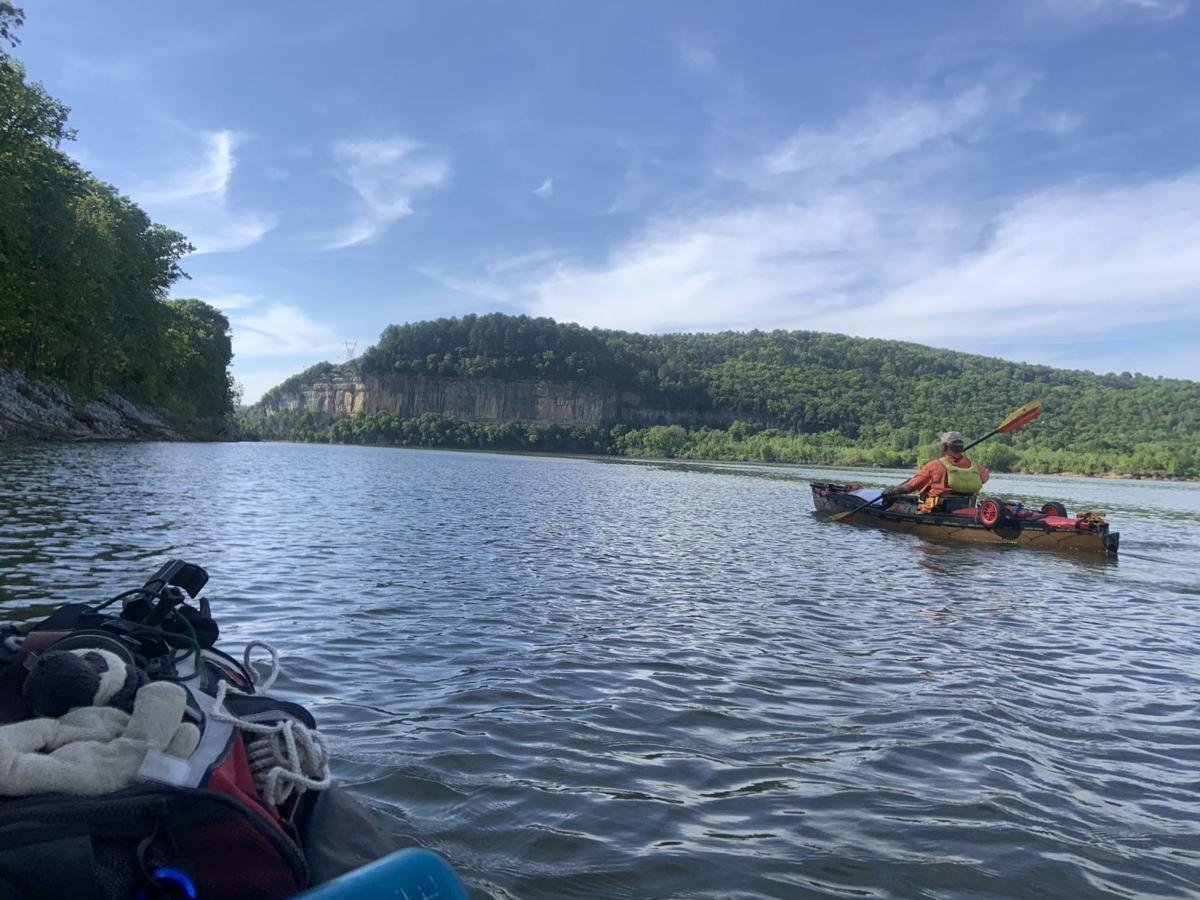 Jeff snapped this picture of Jon approaching Painted Bluff just north of the Guntersville Dam. Jeff posts pictures and information about their trip to his blog.

Jon (left) and Jeff Wunrow are in the middle of kayaking the entire Tennessee River. The cousins made a stop in Guntersville last week.

Milla Sachs of the mayor's office met the two kayakers Monday morning before they left Guntersville. Jon showed Sachs a Corps of Engineers map they're using to navigate the river.

Jeff snapped this picture of Jon approaching Painted Bluff just north of the Guntersville Dam. Jeff posts pictures and information about their trip to his blog.

Two of America’s most navigated rivers have brought a pair of family members together after a 30-year stretch of separation.

Jeff and Jon Wunrow are in the middle of kayaking the Tennessee River and made a stop in Guntersville at the beginning of the week.

The Wunrows are first cousins who grew up together in Wisconsin. Close to their teen years, they became separated when each other’s families moved away. After years of not seeing one another, the two reunited last year for a trip on the mighty Mississippi.

“My wife came to me one day last year and said, ‘Your cousin Jeff is about to kayak the entire Mississippi River,’” Jon said. “I’m a big outdoorsman and thought that sounded like a blast. Jeff and I had seen each other once in the last 30 years leading up to that. I decided I would reach out and see if I could join him.”

Describing Jon as an adventurer is probably an understatement. He is an avid mountain climber, so much so that he has climbed the highest peaks in every country in the Western Hemisphere.

“I grew up in the scouts and always loved being outdoors,” Jon said. “I write grants for a living so I can pretty much work on the road from wherever I am. I’ve never really kayaked before until I got hooked up with Jeff again. I have absolutely enjoyed these trips. The Mississippi was fun and so far, the Tennessee has been great.”

The cousins are very close in age. Jon is 60-years-old and Jeff is right behind at 59. Jeff currently lives in Nashville and is proud to say he’s retired from the workforce.

“After we did the Mississippi River trip last year, I immediately retired,” he laughed. “I knew there was no way I could go back to work after that. It was truly an amazing experience that changed my life. The Mississippi River trip was about 92 days. The Tennessee is much shorter at just 35 days. Jon and I try and get 25 miles of paddling in per day to stay on schedule, but weather can always derail that.”

Weather did throw a kink in Jon and Jeff’s schedule just last week. On Friday, they made it to the Scottsboro portion of Guntersville Lake Their cell phone apps were alerting them of heavy rains and winds in the near future. Without knowing exactly where they were, they pulled over and called a friend for some assistance.

“We’ve gotten to be friends with Brad Collett, who is over the Tennessee River Line,” Jeff said. “So, we called him last Friday and asked if there was anyone he knew in the Guntersville area who could help us out. He gave me Milla Sachs' number so I called her up.”

“They called me and of course I was happy to help them, but they were in Scottsboro and not Guntersville,” she said. “I called over to the Scottsboro Chamber of Commerce and spoke with Sarah Stall, who works there. She said she was more than happy to help. So, she and her husband Daniel went to their rescue.”

The Stalls met Jon and Jeff at a boat ramp near Scottsboro, loaded their kayaks up on the truck and took them to some nearby cabins at Jackson County Park.

“They let us stay in one of those cabins for the night at no charge, which was just more than generous,” Jeff said. “As it turns out, the rain didn’t move in until early Saturday morning. We could’ve probably gotten several more miles in on Friday but we don’t risk it when it comes to weather. You’re not exactly in the most stable of boats when paddling a kayak.”

Sachs met the two kayakers on Monday with some lunch at Lake Shore Tackle across Highway 431 from the boat ramp near Marshall County Park No. 1.

“One of the things I enjoy the most about these trips are meeting great people like the Stalls and Milla,” Jon said. “You really find out that there are a lot of great people in the world. They were all a huge help to us when we came through Guntersville.”

Jon and Jeff began the trip in Knoxville, Tenn., on April 11 and will end in Paducah, Kentucky. They’re keeping Collett at the Tennessee River Line updated on their trip as they go.

The cousins will camp most nights for the rest of the trip. Jon said they stay in hotels about once a week to get some laundry done but for the most part, every night is spent in a tent. They’re already looking forward to kayaking the Cumberland River next year.

“The Tennessee River is a great one to kayak for people with a lot of experience or none,” Jon said. “There’s so many places to stop and it’s set up pretty well for kayak trips. Plus, we got to make a stop in Guntersville. I’m definitely going to plan a weekend trip back here sometime soon.”

Jeff added, “Guntersville and Scottsboro were great stops for us. We met some great people and have memories of a great place. The rest of the trip should be a lot of fun for us.”

Jeff set up a blog site where day to day information about the cousins’ trip can be seen. Visit www.jwunrow.blogs.com to follow along.