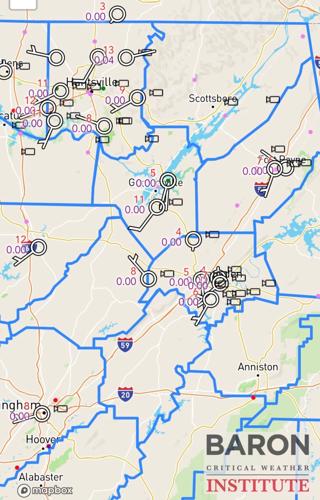 Each of the key-looking icons on the Baron Critical Weather Institute app is a weather station. You click on the station and it gives you full weather details of that station. 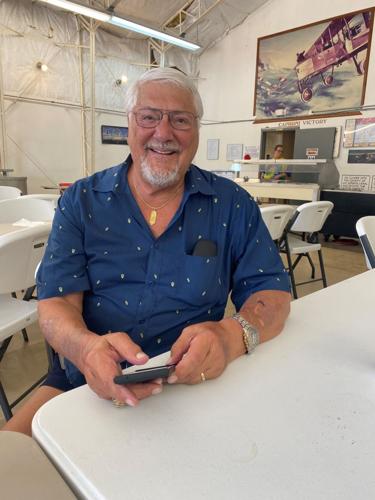 Each of the key-looking icons on the Baron Critical Weather Institute app is a weather station. You click on the station and it gives you full weather details of that station.

At age 78, weather guru Bob Baron is slowing down a bit, but only slightly so.

The beloved former TV meteorologist stepped down this year as CEO of his wildly successful weather radar company, Baron Services, but remains as chairman of the board.

“It was time for the next generation of management,” he said. The person succeeding him has been with him for a number of years, so Bob felt very good about the transition.

Baron has turned his attention to a new project, one that is free and has great potential to help save lives during times of severe weather.

He is working to put at least one weather instrument package and camera in every county in Alabama. It’s called the Baron Critical Weather Institute. There’s a website and an app, all free for anyone to use.

When you open the site, anywhere there’s a weather instrument, there’s an icon on a map. Tap the icon and information that pops up includes temperature, relative humidity, barometric pressure, wind speed and direction and recent precipitation.

“We are enlisting partners like the Marshall County Gas District to make this happen,” Bob said.

“There’s a good chance it will be my last project,” Bob said, with a smile.

Phyllis has her doubts.

“The wheels are always turning,” she said of Bob’s mind. “He wouldn’t be Bob if they weren’t.”

Bob was a beloved weathercaster for Channel 31 and 48 in Huntsville in the 1980s and 1990s. He had a connection to Guntersville even then.

The word “wetter” was a play on “weather.” Bob had struck a deal for a boat from Sunrise Marine (where Erwin Marine is today) and he would occasionally do TV weather segments from the boat, giving the marina a plug in the process.

Baron Services got its genesis in 1989, the year the killer tornado hit Huntsville’s Airport Road.

“I knew we had to do a better job tracking storms,” Bob said. “We had to take our digital radar and be able to zoom in on storms.”

He formed his company in 1990 but the first product did not hit the field until 1992.

“We sold 6 of our digital storm tracking products in 1993,” Bob said. “That was half the market. There were 12 stations in the country that had digital radar.”

The idea was always just to provide the software to allow meteorologists to zoom in on storms. But by default, Baron Services had to get into the business of actually providing the radars as well.

In all, Bob spent 20 years on the air forecasting the weather. But that was not entirely smooth sailing, either.

“Channel 48 did not like that I had started my own company,” Bob said.

So his contract with that station was not renewed at the end of 1993.

“I went to M.D. Smith at Channel 31,” Bob said. “I told him about the company. I also told him I had a non-compete agreement so I couldn’t be on the air every day doing the weather. M.D. said, ‘I’ll buy your product and I’ll buy you, too.’”

Bob could do “guest appearances” under the agreement so he did a number of them for Channel 31 until the non-compete was no longer in effect.

So just how big has Baron Services gotten?

There was a multi-million dollar contract to upgrade radars and operating systems for the National Weather Service.

“There are 171 National Weather Service stations, so they all have the little B on them now,” Bob said.

“The project was done on time and on budget,” Phyllis added proudly.

In the TV weather radar market, Baron handles the work for well over 90 percent of the U.S. stations.

For the Critical Weather Institute, Bob says it will be a success if they can have at least a single instrument package in each county.

Working on the project are basically Bob and Phyllis, a volunteer from Baron Services and Boeing retiree Norm Tew.

But don’t be surprised if the project doesn’t get a lot bigger than that. The Alabama DOT has signed on to be a partner (John Cooper of Guntersville is the director).

“The great thing about that is they have all these cameras that monitor road conditions,” Bob said. “They can just point them towards the sky during bad weather.”

Alabama Power, which covers the lower two-thirds of Alabama, is also a partner and will be deploying some packages soon.

The folks in DeKalb County liked the system so much that they got their free package from the Institute, then ordered seven more. The instrument packages run only $2,500 each.

“What we are doing is building a weather network for the entire state,” Bob said. “Some other states have them, but Alabama does not.”

The information is not just free for the general public to use. TV forecasters and EMA storm trackers can use it as well.

Bruce Weddendorf of Straight to Ale is interested in locating one at the new City Harbor. He said the top of the silos might be a great place to put a camera.

“It’s a fantastic promotional tool for our partners, because the location comes up any time that site is used,” Bob said.

He said he would love for it to become a “high density” network with a number of weather stations throughout the state.

Bob and Phyllis hold dual citizenship, maintaining residences in both Huntsville and Guntersville.