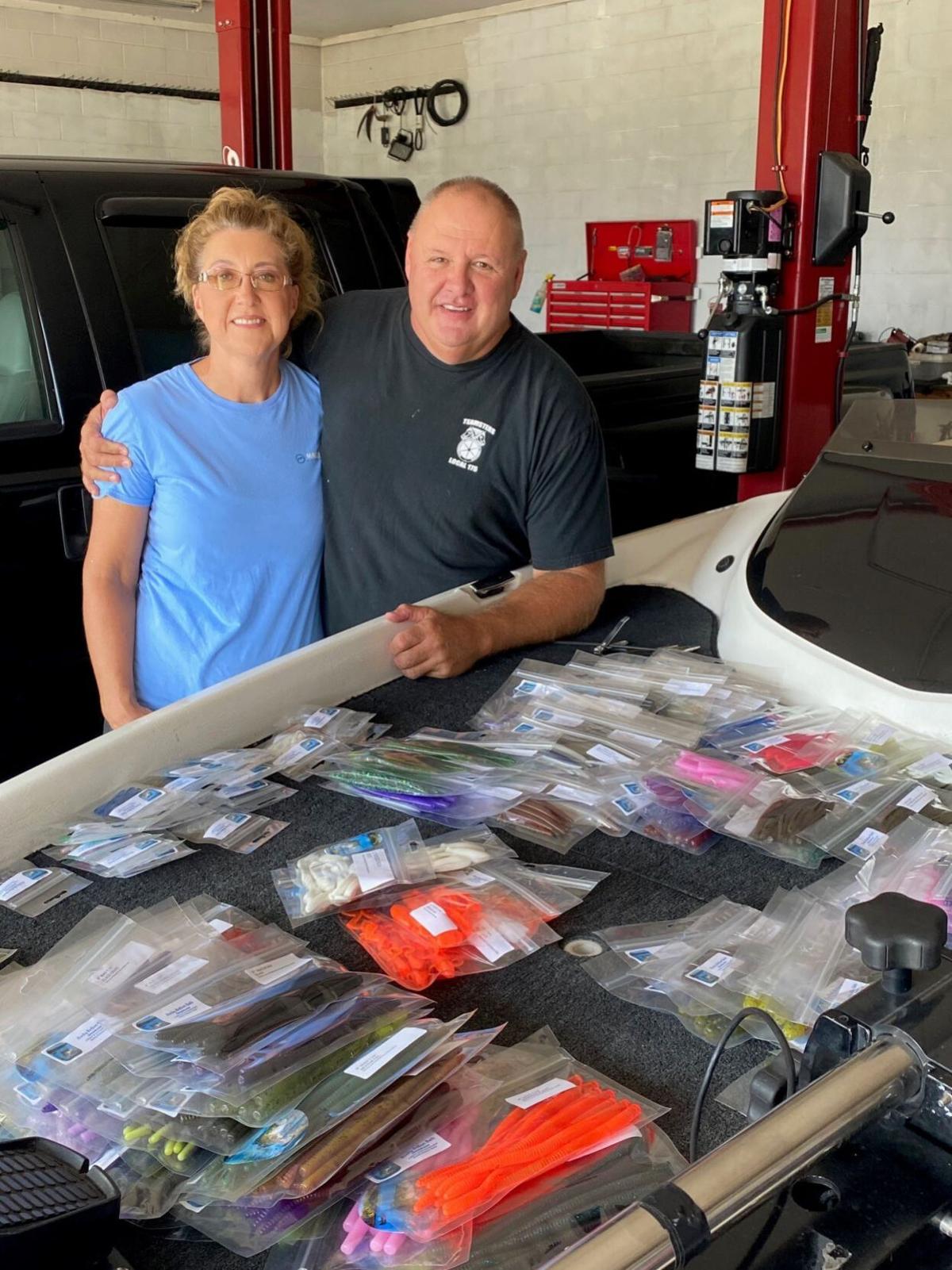 Sharon and Gus White are running a bait business, Rocky Bottom Baits, out of a shop at their home. It has taken off beyond their wildest expectations, at least partly because the supply line of fishing tackle from China has dried up. 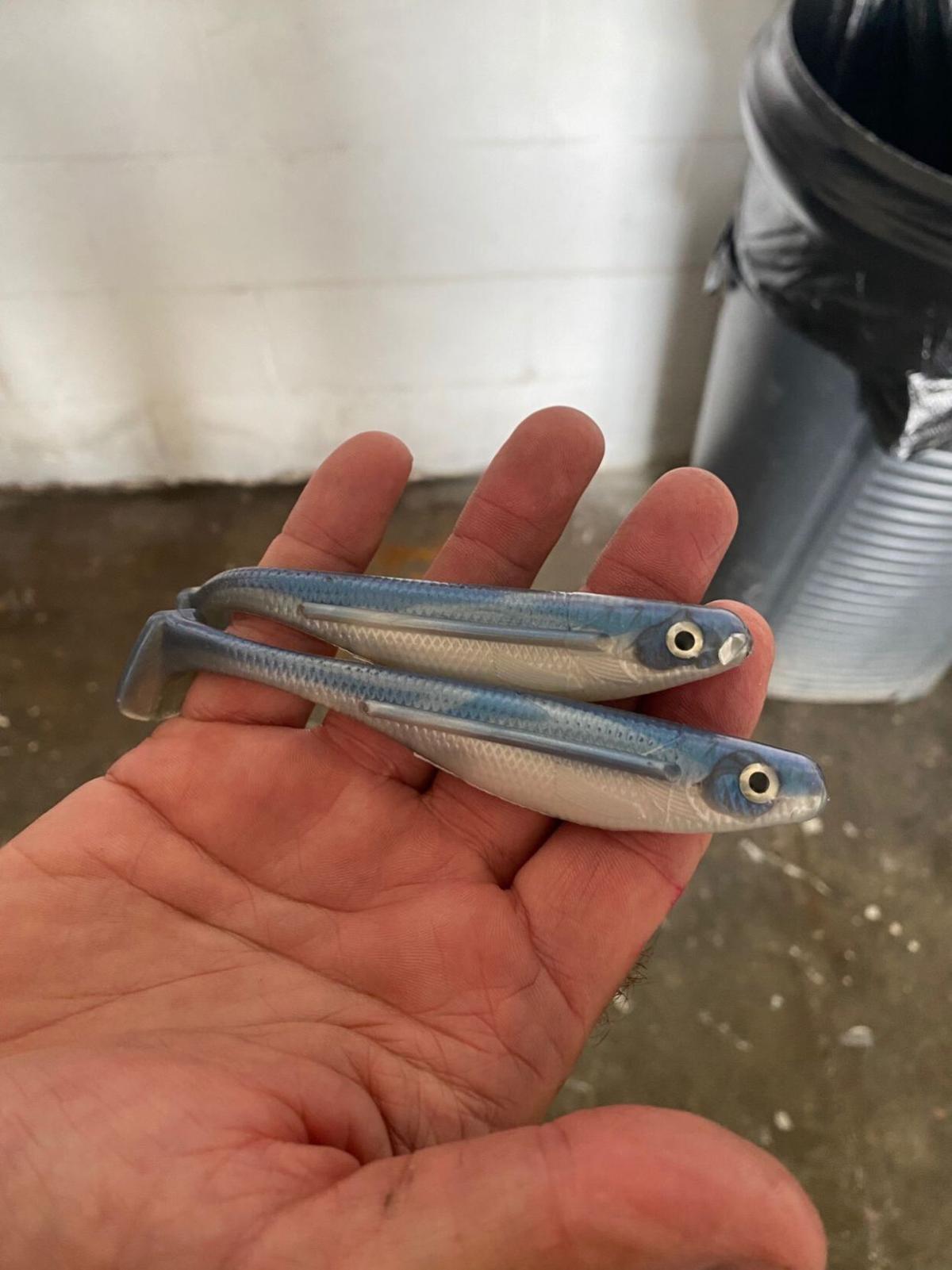 Gus holds a couple of his big swimbaits. They're popular baits on Guntersville Lake. 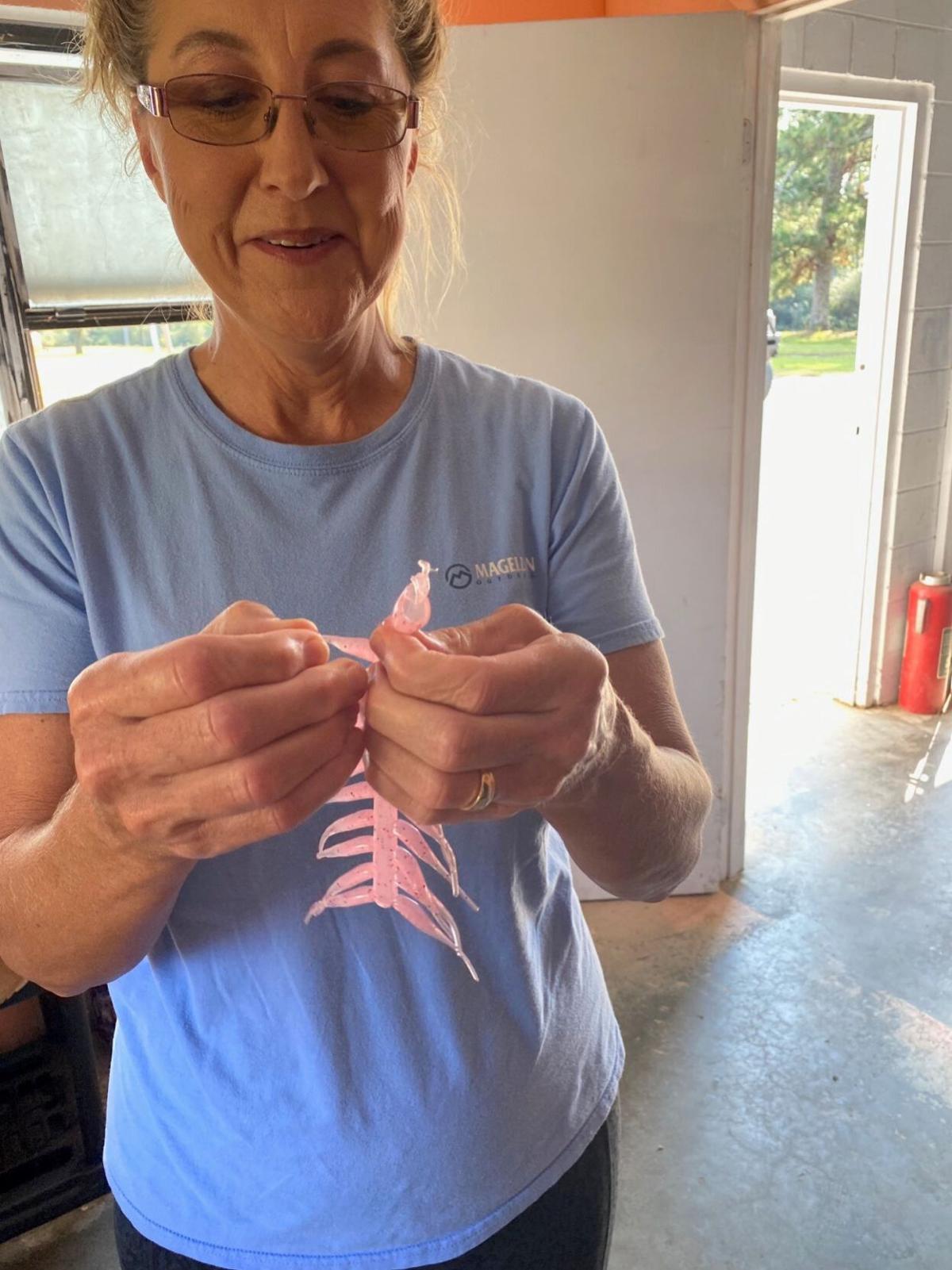 There's just something satisfying about snapping crappie jigs off the center piece of plastic after they're molded, Sharon said.

Sharon and Gus White are running a bait business, Rocky Bottom Baits, out of a shop at their home. It has taken off beyond their wildest expectations, at least partly because the supply line of fishing tackle from China has dried up.

Gus holds a couple of his big swimbaits. They're popular baits on Guntersville Lake.

There's just something satisfying about snapping crappie jigs off the center piece of plastic after they're molded, Sharon said.

It started as a whim really, just something to do to along with the hobby of fishing. But in just a few short months, a garage bait business has already grown far beyond anything owners Gus and Sharon White could have imagined.

The Whites like to bass fish. They moved from West Virginia to Horton a few years back just because they’d traveled here fishing on vacation every year for years. Gus always said he was going to move here when he retired and he was one of those lucky few retirees who makes good on what he says.

Last March, he was watching a YouTube video of someone pouring their own plastic baits. He thought he would enjoy doing that, so he bought some molds and some plastic and got started.

He gave a few baits to his friends. They liked them and suggested he start making a few to sell. So he did.

About that time, the coronavirus pandemic hit. The flow of fishing tackle from China to the United States slowed to a trickle and the Whites started selling a whole lot of their plastic baits.

Their business, Rocky Bottom Baits, was born. They’ve got 25 different molds and make everything from big swimbaits and creature baits to miniscule crappie jigs.

Even though there are only 2 of them, it’s not unlike a factory.

Sharon handles quality control (it’s easy to have a few bad baits in a batch), packaging, marketing and shipping. Most of their sales take place through social media. If you send them a message, you may think you’re talking to Gus, but it’s more than likely Sharon answering your message. She is after all the marketing person.

The Whites say they know they’ll never give plastic bait giants Yum or Zoom a run for their money, but the business is just the size they want and they’re having fun.

They like to fish 3 or 4 days a week and the bait business supports that habit.

“When we started, we thought we could make enough to cover our expenses,” Gus said.

The largest order they’d ever filled for a single customer, $1,000 worth of baits, was spread on the deck of their bass boat the day we visited.

Bait shops have begged them to make and sell baits through them. But the Whites are afraid it might become too much like a real job if they were to do that.

The raw plastic arrives in big buckets and barrels. Gus adds the dye and any metal flake and heats the plastic to 350 degrees in a dedicated microwave oven just for that purpose. He has manual injectors he uses to then put the plastic into the molds. The process goes quite quickly.

Crappie jigs come out with rows of jigs along a center piece of plastic. Sharon enjoys snapping them off for packaging. There’s just something satisfying about that process, she said.

There are no “trade secrets” in this shop. If someone wanting to get started in bait making wants to avoid some pitfalls, Gus is happy to help with tips, recipes and the like.

The business is still small enough to have a human touch. If you call, someone will likely answer the phone. They also enjoy having fellow anglers visit the shop.

When they ship products to customers, they always try to give them a little something extra.

“Shipping costs a lot,” Sharon said. The "little something extra" helps make it worth it.

They’ve sent product to all 50 states. They have overseas customers as far away as Brazil wanting baits, but overseas shipping is just cost prohibitive.

Everything they ship goes through the U.S. Postal Service. It’s a bit ironic because Gus spent his lifetime working for UPS.

He retired from UPS after 40 years and 7 months with the company. Sharon had a nearly equally long tenure with the West Virginia State Highway Division.

“We first came to Guntersville to fish in 1995,” Gus said. He wanted to visit after watching an episode of the Bassmasters on TV.

It’s 500 miles from Charleston, West Virginia, to Guntersville, a drive they would make as many as 3 times a year once they got hooked.

Three years ago, they made the permanent move. They wanted acreage (they’d lived in town previously) and a large shop. Susie Conerly sold them their place, which had the requisite shop.

In addition to his love of fishing, Gus has a longtime “need for speed” and has an alcohol-blown dragster that will do 250 miles per hour and he races regularly. They also have a Harley-Davidson motorcycle.

“We just use it to drive from one Dairy Queen to another,” Gus said.

His bass boat, an Allison, just might be the fastest fishing boat on Guntersville Lake. He pegged it out at 101.2 miles per hour once.

“An Allison is just a racing boat with a livewell and a front deck,” Gus said. It has a 260-horsepower racing outboard.

“I was not on board when he ran 101 mph,” Sharon pointed out. She has a 70 mph speed limit when she’s in the boat with him. And it is a hard limit.

“She watches the speed and she starts hitting me if I get over that,” Gus said.

If you’d like to get into bait making just to save a few bucks on your own tackle, Gus’s advice is don’t do it. It’s much easier to buy your baits  a bag at a time for $5.

“Some of these molds cost $250,” he said. You’d have to make an awful lot of baits to ever make it break even.

Even though he has only been in the bait business a short time, he has already noticed the seasonal patterns that are popular with local anglers. Big lizards and beavers were hot sellers in the spring. Big worms for ledge fishing were in demand starting in May and June. Flukes for schooling fish are hot right now.

Gus can make just about any color bait you’ve ever heard of. An old color you don’t hear mentioned much anymore, motor oil, is among his most popular.

Customers can order custom colors. Gus gets orders for some wild ones.

“I might think, ‘That is going to look like crap,’” he said. But the customer is always right and he dutifully makes them, never sharing his own opinion.

He likes the natural colors himself, watermelon with red flake, green pumpkin with orange flake, things of that nature. He makes some baits, particularly worms, with the tail tipped in a different color than the rest of the bait.

It helps, he says. Guntersville bass are among the most educated in the world.

“A little something different can help some days,” Gus said.

The Whites are no slouches when it comes to fishing. His personal best is 9-3. Hers is 7-4. Like everyone, they dream of catching a bass that breaks 10 pounds.

It is special when they catch one on their own baits. And they encourage customers to send them photos of nice bass caught on a Rocky Bottom Bait.

There’s no special meaning to the name. There are a lot of folks out there who make baits or have a bait shop.

“We just went to Google and started looking at names,” Gus said.

No one else had Rocky Bottom Baits.

“I didn’t like it at first,” Sharon said. But the name has grown on her now.