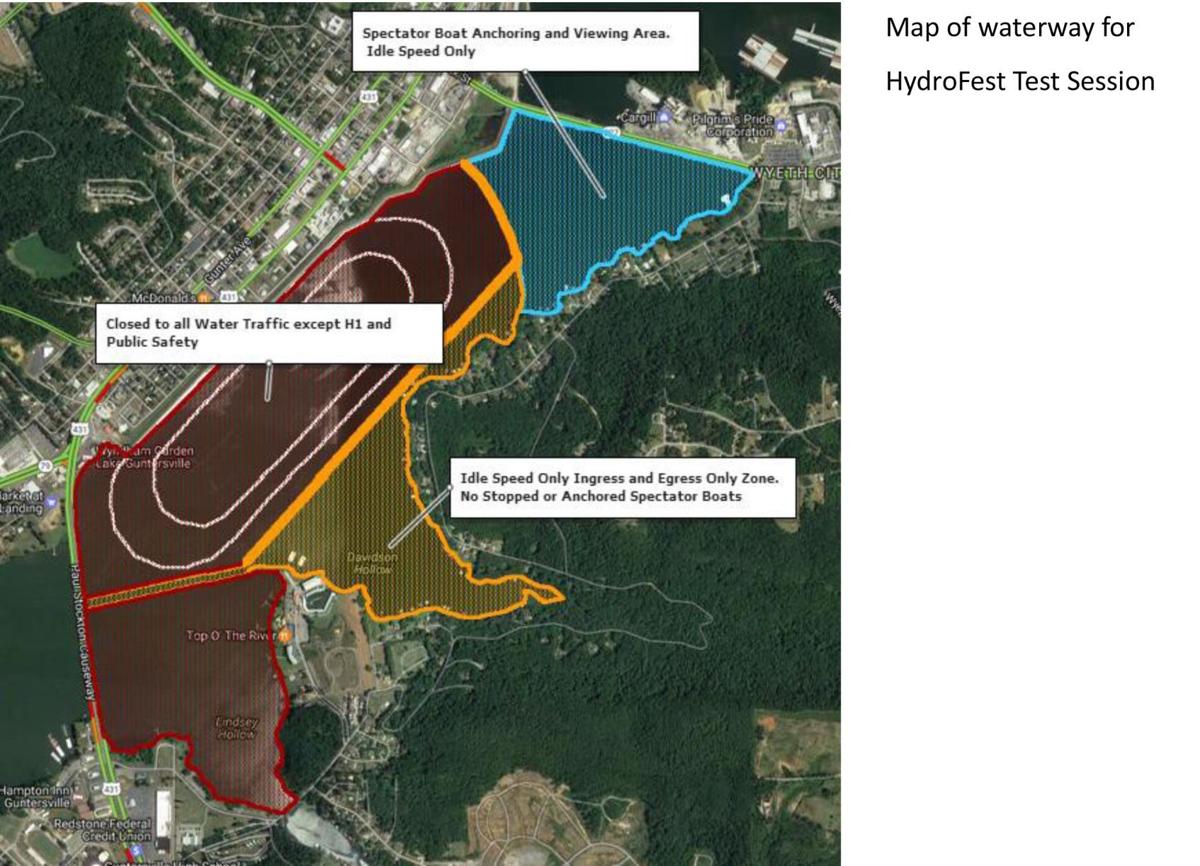 This map from the Marshall County Convention & Visitors Bureau shows the boat race course for Saturday's test, along with the area where spectator boats can moor. 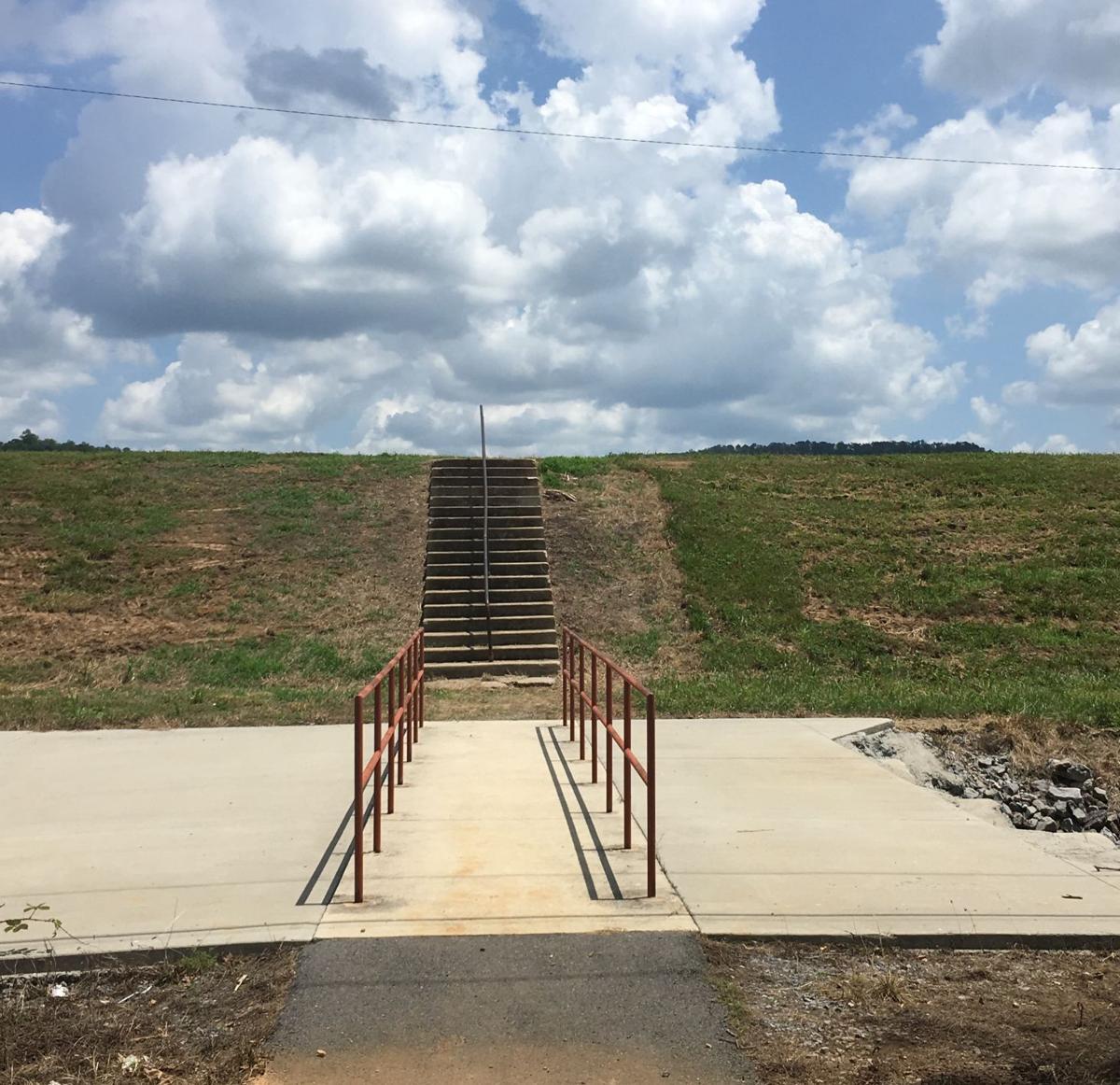 This walkway and steps lead to the levee, where viewing will be best for Saturday's boat race test.

This map from the Marshall County Convention & Visitors Bureau shows the boat race course for Saturday's test, along with the area where spectator boats can moor.

This walkway and steps lead to the levee, where viewing will be best for Saturday's boat race test.

Larue Kohl is the chairman of the Hydrofest boat races and said fans will see some exciting boats when a couple of them come to Guntersville to test Saturday.

Katy Norton, president of the Marshall County Convention & Visitors Bureau, said the boats will hit speeds of 200 miles per hour. Two teams are coming, Miss Home Street, the defending H1 Unlimited champ, and Wiggins Racing, the local team based out of Rainbow City.

“These boats don’t buzz around the course,” said City Councilman Dink Myers, who is co-chairman of the boat races. “They’ve got jet engines and they roar. When they fire them up, something is going to be rattling. We bass fish on this lake, we bow fish on this lake and come Saturday, we’re going to run race boats on this lake.”

Mrs. Norton said there had been some confusion about these being actual boat races. This is a test of the course and the boats. The actual races will be in June of next year.

Instead of racing side-by-side, the boats will run one at a time as a way for the teams to check out their equipment.

A vintage racing boat, the wooden Gale 5, will also be coming.

“It will be interesting to see the Gale 5, which is the type of boat that raced here in the 1950s, compared to today’s boat,” Mrs. Norton said.

The boats are expected to run rain or shine, although lightning or strong winds could hinder the test. Spring Creek between the Highway 227 causeway the Paul Stockton Causeway will be closed to recreational boating. So will the boat ramps at Bucky Howe Park and the Wyndham Hotel.

Spectators' boats will be allowed along the Highway 227 causeway, but they will be tightly controlled. Spectators can also watch from the levee. A walkway and stairs behind Fire Station 1 on Blount Avenue access the levee.

No alcohol, umbrellas or tents will be allowed, but spectators can bring chairs and coolers.

Spring Creek will be closed to boat traffic starting at 8:00 a.m. The marker buoys for the test will be set between 8:00 and 9:00, and testing will start after that. The tests won’t be continuous, and there will be some downtime during the day. The teams will take a lunch break from 12:00-1:00.

Traffic barrels will be set up along the causeways to keep motorists from pulling over to watch the races there, police chief Jim Peterson said.

Both he and fire chief Brian Waldrop said they don’t expect any public-safety problems due to the boat races.

“For the public-safety personnel, this is a scrimmage for next year’s game when the actual boat races come to town,” Chief Peterson said. “We have as many agencies involved in the boat races as we had involved in the recovery from the tornadoes. They just won’t be fully staffed with personnel for the test.”

Mrs. Norton did note that the area along Railroad Avenue near the levee is a construction zone right now. The Guntersville Water and Sewer Board is having a new sewer line put in there.

She asked the people attending the test not block the drives of homes or businesses in the area.