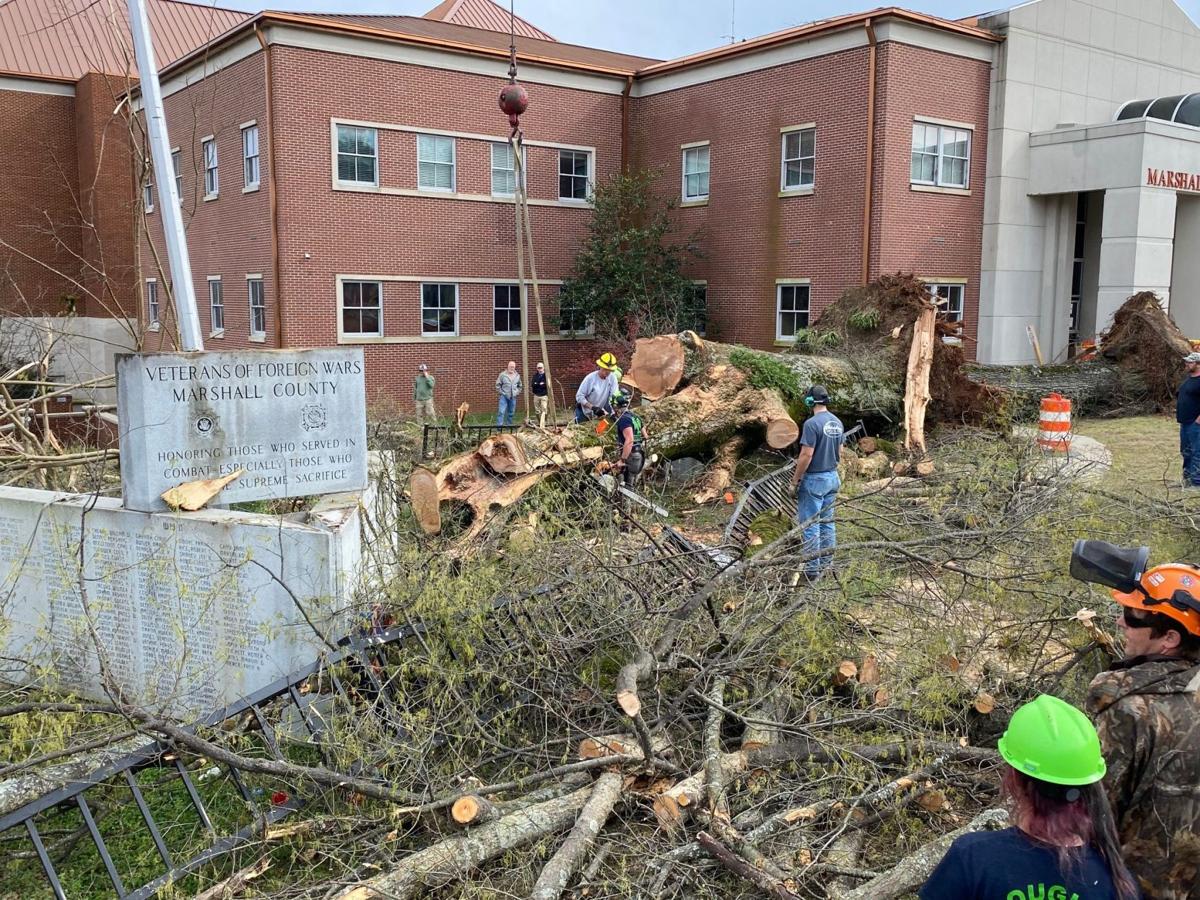 Douglas Tree Service works to clean up the remains of two massive oaks that fell on the Courthouse lawn during a storm Sunday. The veterans memorial appears to have come through the crash intact. 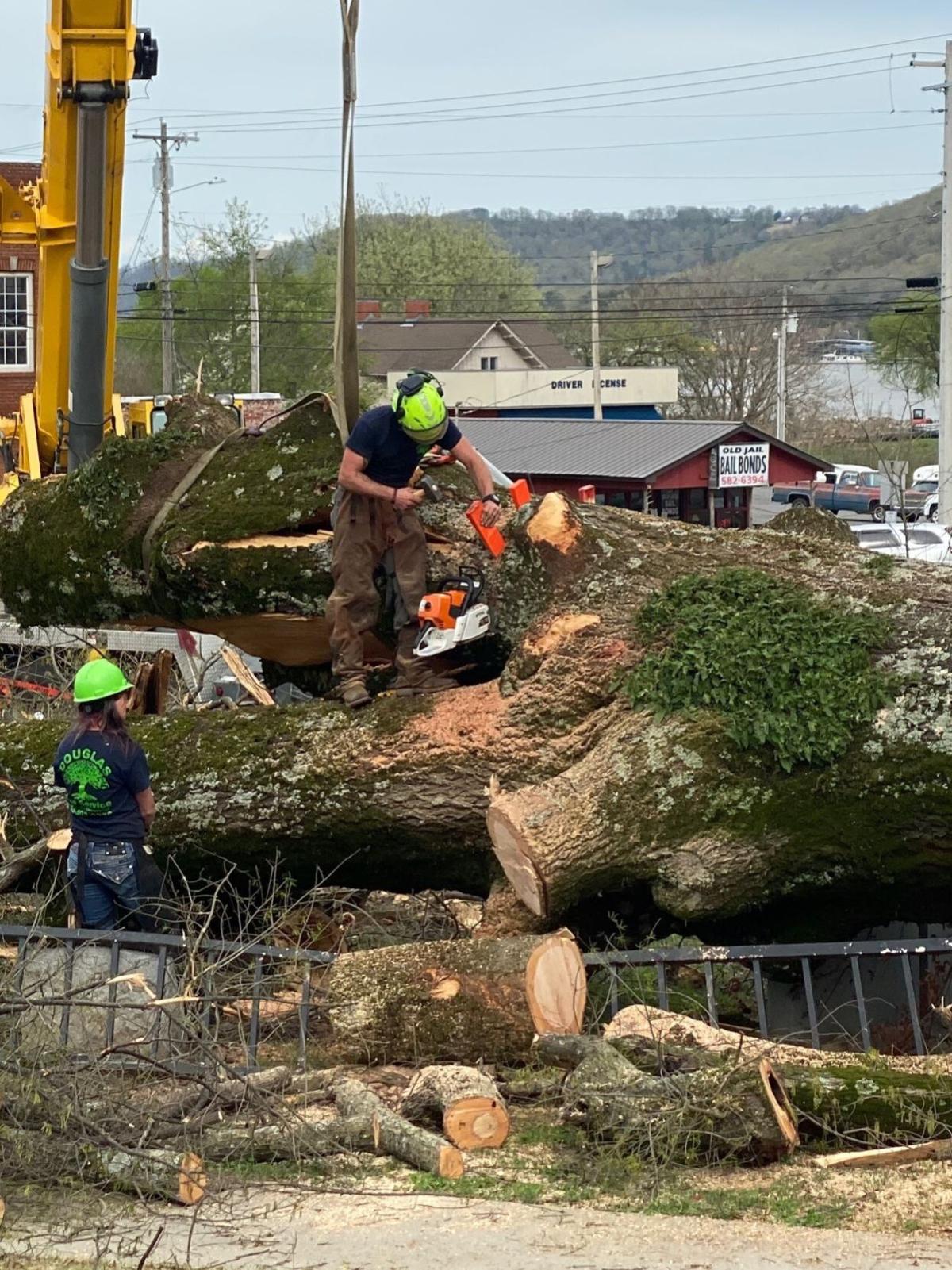 A Douglas Tree Service worker tries to free a stuck saw. You really get an idea of the size of the tree with the person on top of it.

Douglas Tree Service works to clean up the remains of two massive oaks that fell on the Courthouse lawn during a storm Sunday. The veterans memorial appears to have come through the crash intact.

A Douglas Tree Service worker tries to free a stuck saw. You really get an idea of the size of the tree with the person on top of it.

When the giant oaks blew down in front of the Courthouse Sunday, one of the first questions people asked was “How old do you think they were?”

Guntersville historian Macey Taylor, who spends a good bit of time at the Marshall County Archives, had the answer.

This story about the origin of the trees ran in The Advertiser-Gleam’s June 12, 1953, edition. There were 5 oaks at that time, out of 20 that were planted originally. Here’s the story:

There are only five oak trees in the court yard now, but in the beginning, there were 30.

It seems the yard was shaded with short-lived trees in 1919. One day in February, Sheriff Brouv Hyde asked Probate Judge Gordon Gilbreath what he thought about setting out some live oaks.

The judge was willing so they asked Steve Helton what he would set out 20 young oaks for. Mr. Helton said it ought to be worth $10 to do that much work so Mr. Hyde gave him $5 and the judge $5.

Mr. Helton dug great holes several feet deep and placed a large lime rock at the bottom of each. He explained that kept the moisture on the roots. Anyway, the trees flourished.

But between small boys swinging on them and a herd of goats that had a feast one night, they died one by one until now there are only 5 left to shade this and coming generations.

Taylor found another old Gleam story from 1963 when the “annex” was being built for the Courthouse. The initial story said none of the oaks would be lost. However, a subsequent story said one tree was cut down to make room for the addition.

Another tree was lost apparently because too much dirt was piled around it. A story in the Gleam in 1995 said it happened 22 years earlier, putting it in 1973. That recap ran in July of 1995:

would die, it did

22 years ago some dirt was hauled to the Courthouse lawn to make it more level.

“They are getting they dirt too deep around that tree,” Mrs. Ross said, pointing to the tree at the south end of 4 big oaks that stood right in front of the Courthouse. “They need to build a well around it to keep the dirt away or it will die.”

Mrs. Carter said that was right.

Nobody built a well around the tree. Maybe the ladies’ advice didn’t get to the right people.

For a while, the tree didn’t show any bad effects from the dirt. But a couple years ago, it didn’t put out leaves in the spring when the others did. It was feared that the tree was dead, but a few weeks later, it did leaf out, and seemed to get along fairly well. The county had a tree surgeon do some work on all 4 trees, and had them cut back, partly because the limbs were getting into the side of the building.

Now it looks like the tree at the south end of the row really is dead.

Here it is July and the only leaves on it are dead ones from last year.

The trees are about 65 years old. Doug Canfield says they were set out when Gordon Gilbreath was probate judge. He was elected in 1916.

“He had Steve Helton plant them,” Mr. Canfield said. “They were just small saplings then. They are all willow oaks except the one just south of the middle walk. That one is a water oak. You can tell the difference by the leaves. Steve got them from the Hooper Bottoms. That part of town is under the lake now, behind the feed mills. Steve buried a flat rock under each tree. He said it would hold mosture.”

Is that a good idea.

“Must be. Most of the trees are still alive.”

So that was 2 of the 5 surviving trees that were lost.

Taylor also found what happened to the third.

In May of 2017, another of the old oaks had to be cut, according to her research.

“Douglas Tree Service removed the tree at no cost to the county,” Taylor said. “Estimates ran at about $2,500. It took from 8:15-10:45 to cut it down. The summer drought was blamed for its demise. The tree rings showed it to be approximately 100 years old. Chairman Hutcheson had expressed safety concerns about the tree.”

Douglas Tree Service was back at the Courthouse Sunday afternoon along with Whitaker Towing and its crane service removing the wreckage of the last of the Courthouse’s old oak trees.