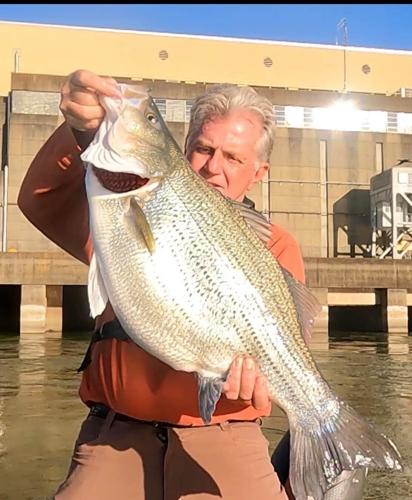 Did Rocky Drake catch a Guntersville Dam hybrid striped bass that could have been a new state record? We will never know because he didn't have his scales, didn't weigh it and returned it to the river. 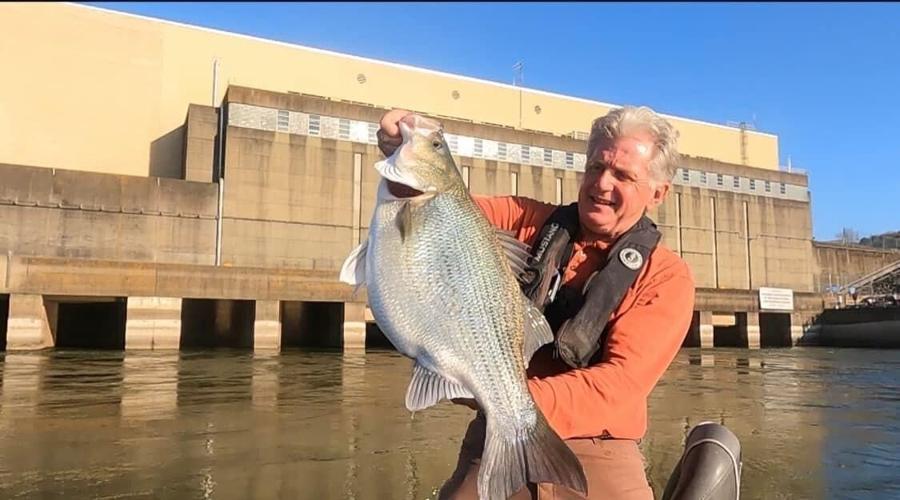 Rocky Drake is shown with the enormous hybrid striped bass he caught at Guntersville Dam.

Did Rocky Drake catch a Guntersville Dam hybrid striped bass that could have been a new state record? We will never know because he didn't have his scales, didn't weigh it and returned it to the river.

Rocky Drake is shown with the enormous hybrid striped bass he caught at Guntersville Dam.

Rocky Drake is one of north Alabama’s most well-known outdoorsmen. For years and years, he was a taxidermist and he had a very particular set of skills when it came to finding and shooting extra-large whitetail bucks with a bow and arrow. He had his own TV show for more than 10 years.

Rocky just got a little more famous. He caught – and released without weighing – a hybrid striped bass that could’ve either pushed or broken the state record of 25 pounds 15 ounces. It was all captured on video as Rock has his own YouTube channel and he also happened to be fishing with superstar YoutTube angler Richard Gene, the Fishing Machine.

“Richard and I met fishing off the bank down at the dam and we just hit it off,” Rocky said. They ended up fishing some together. Rocky missed having his TV show and Richard told him he ought to start a YouTube channel.

“A TV show and a YouTube channel are totally different,” Rocky said. “You don’t have to have sponsors. I can do all my own editing. I’m a one-man show.”

It has been a pretty good spring for fishing below the dam, particularly live bait fishing. Rocky usually fishes during the week, but on the spur of the moment, he went down to the dam on a recent Saturday.

“I caught a bunch of bait,” Rocky said. “And I though conditions were right to catch some big stripers. I called Richard to see if he could get down there and he said he could.”

Rocky said he knew it was going to be a good day because, while he was waiting on Richard, he tossed out a bait and caught a 5-pound spotted bass on the 1st or 2nd cast.

“I thought, ‘Well, if the stripe ain’t there, we can catch some bass,’” Rock said.

Once they were loaded and in the boat, they motored up near the dam where Rocky thought some stripe might be.

“The current was just perfect,” Rocky said. “Fishing below the dam is all about the current. I pulled up in a spot and I spot locked on it.”

Spot Lock is a feature on high end trolling motors that will keep the boat positioned in the exact same spot automatically. Rocky experimented a little with how much lead he needed to get his bait where he wanted it.

“Richard caught the first big one,” Rocky said. “It was a big saltwater and it either broke off or came off. Then in just a little while, he caught a 15-pound hybrid. I thought, ‘We’re fixing to catch them.’”

Rocky said he thought he’d caught enough bait to last until dark, but he hadn’t counted on the white bass. If the stripe and hybrids are running, the white bass likely are too. They’re all in there below the dam because of the shad that are running.

“I call the white bass minnow-eaters because they will eat a lot of your bait,” Rocky said.

They men caught another saltwater and another hybrid.

Then Rocky got a bite.

“It was just a tap and I thought it was another minnow-eater,” Rocky said. “I set the hook and it about jerked the rod out of my hand.”

Richard Gene has fished so much and so long, he’s about as knowledgeable as they get when it comes to fish behavior. He’d shared with Rocky how saltwaters and hybrids act differently when hooked.

“The saltwaters run downriver,” Rocky said. “You have to drift with them or they’ll pull all your line off and break you off. But Richard said hybrids often run towards the dam.”

When this fish first took off, Rocky thought it was a saltwater. But then it ran to the dam.

“Richard said, ‘That ain’t no saltwater. That’s a hybrid and it’s going to be a monster,’” Rocky said.

He fought it for about 15 minutes and figured he had it hooked pretty good.

“If a fish is going to get off, it’s usually within the first 5 minutes,” Rocky said. He kept the boat on Spot Lock, mainly for one reason.

“If you drift off your place and someone else has seen you catching fish, they will slide in there,” Rocky said.

Rocky said he was focused on fighting the fish and didn’t really think much about the size. Richard saw it and told him it was a big one.

“He got the net and I walked it back towards him,” Rocky said.

It was then that Rocky got a little nervous. They had a hard time getting it in the net and it took a little while.

When they pulled it out of the water, Richard Gene told Rocky he’d never seen a hybrid like that one.

They admired it, took pictures of it and put it back in the water. Normally, Rocky would’ve had scales in the boat. But he’d gone pond fishing the day before and he left his scales with his pond stuff.

“I’ve had a lot of people ribbing me, ‘Hey, old boy, you need some scales,’” Rocky said.

But even if he’d had scales, weighed it and it had been a potential record, he would not have changed his course of action. He said he would not have killed the fish to take it to certified scales for official measurement.

The state record for hybrid striped bass is 25 pounds 15 ounces caught on the Sipsey Fork in 1996 by E.H. Hodges.

“What’s ironic is I used to do taxidermy and I mounted a state record or world record once upon a time,” Rocky said.

The footage of Rocky’s big fish is on his YouTube channel in an episode titled “Monster Hybrid Stripe!!! (Did I Release A Potential State Record Fish?!)

Rocky said he just enjoys fishing. He enjoys it so much in fact that he no longer bowhunts.

“With bowhunting, I’d be sitting in the stand thinking of all these other things I needed to be doing,” he said. “With fishing, I’m just sitting there thinking about catching fish.”

His set-up for fishing live bait below the dam is 30-pound Power Pro braid with a 12-pound mono leader approximately 7-8 feet long. He uses a No. 2 hook if he’s fishing for bass, a 2-0 when he’s after big stripers.

He puts split shot on his line until he can barely feel his bait ticking the bottom. If you put too much weight on the rig, frequent hang-ups are inevitable.

If you’re not an avid angler, it might be difficult to tell the difference between a true saltwater stripe and a hybrid. There’s a real easy way to tell at a glance. The stripes on a saltwater are solid and unbroken. The stripes on a hybrid are broken, usually mainly near the belly.

Stripers get bigger than hybrids, which are a cross between a white bass and a striper. The white bass, while similar in appearance to the striper and hybrid, are native to the river and max out at a much smaller size than the hybrid and the striper.

Rocky says there’s just something about being on the water, chasing fish. He regularly fishes 4 Tennessee River impoundments – Guntersville, Wheeler, Pickwick and Wilson.

“I’ve been a live-bait fisherman for 30 years I guess,” he said. “I just feel very fortunate to get to do what I do.”