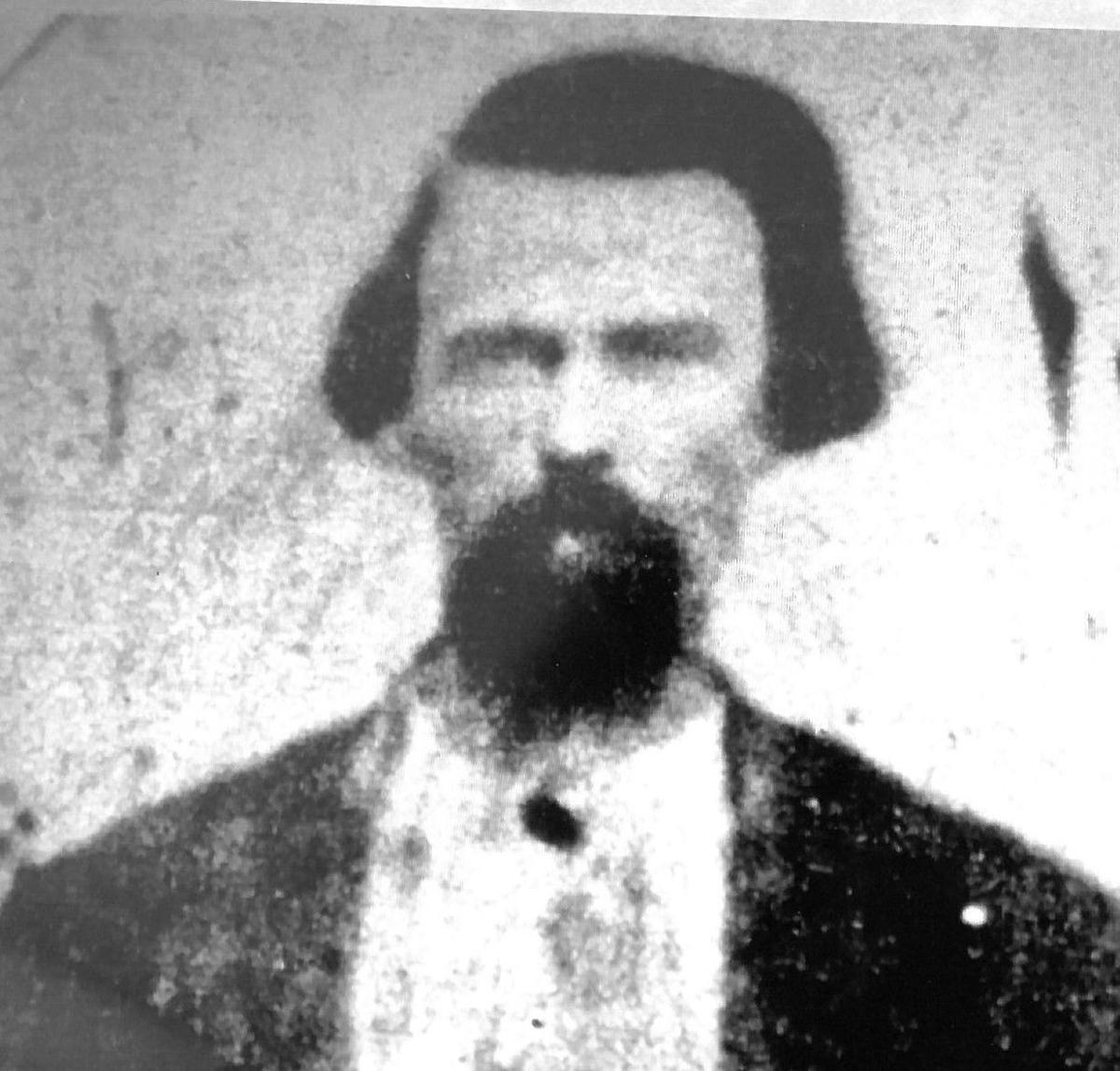 This grainy old photo gives you an idea of what Capt. Thomas Eubanks looked like. 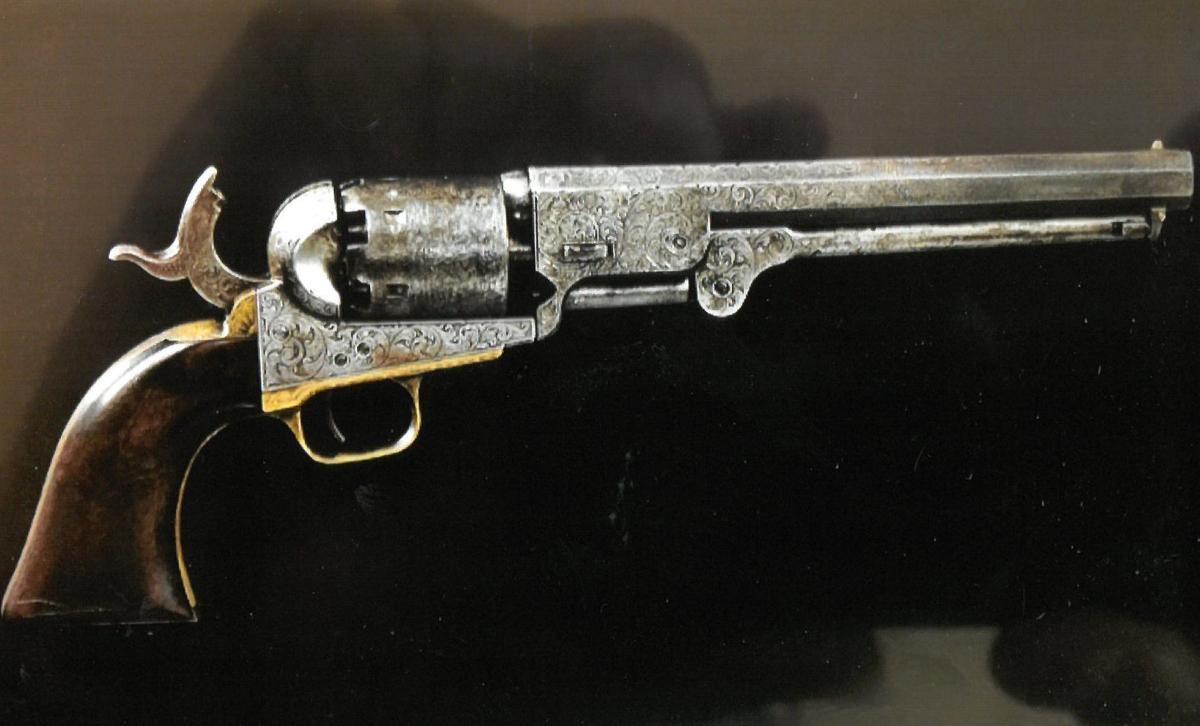 Capt. Thomas Eubanks' 1851 Colt Navy revolver, given to him by his men after Gettysburg, was expected to bring in $12,000 at auction. It brought a whopping $47,500. You can see that the revolver was obviously used from the wear on the barrel.

This grainy old photo gives you an idea of what Capt. Thomas Eubanks looked like.

Capt. Thomas Eubanks' 1851 Colt Navy revolver, given to him by his men after Gettysburg, was expected to bring in $12,000 at auction. It brought a whopping $47,500. You can see that the revolver was obviously used from the wear on the barrel.

(This is Part 2 of the story of James Sheffield and Thomas Eubanks of Guntersville going off to war together during the Civil War. At the conclusion of Part 1, Sheffield had been badly injured and Eubanks killed in the Chickamauga campaign. Sheffield had served as "the lone escort" to bring Eubanks' body home for proper burial. This is the rest of their story.)

During the war, James Sheffield came home on furlough several times and on one of these occasions, he visited Major A.C. Beard's family at Beard's Bluff for the purpose of doing some fishing, of which Sheffield was fond. The fishing party came upon a patrol of "home guards" and the meeting eventually turned to an argument over politics. There was no report on how successful was the fishing.

After Sheffield resigned his command and brought Eubanks' body home as the lone escort, he joined the home guards as it was the only line of defense locally against Federal patrols near the river and gunboats on the river. Several after action reports in the Official Record stated Federal patrols made a point to look for Sheffield when they were in the Guntersville/Warrenton area.

Many homes and structures in Browns Valley and the Guntersville area were burned by Federal patrols, including Sheffield's home near Warrenton. The war ended in April 865 and by the time troops got home, it was too lat for many to plant the year's crop. In a land already picked clean from foraging troops on both sides, food was in short supply. It was a difficult time for the citizens of the area. A pick-your-poison situation existed; exposure or starvation.

In the 1990s, I attended a Bright family reunion which was held in Guntersville each year. I, like most attendees, am a descendant of James Sheffield. At one of these meetings, members of the Eubanks family attended.

In 1876 (the year of the U.S. Centennial and the Battle of the Little Bighorn) , Mattie Bennett Eubanks married Patton Barnard of Oleander, Marshall County, Alabama. Barnard, who was 18 years Mattie's senior, had served in the 48th Alabama as 1st lieutenant and probably knew Eubanks and Sheffield well. Since he was an officer of the 48th, he likely contributed to purchasing the 1851 Colt Navy Revolver for Eubanks after the Battle of Gettysburg.

The April 2014 issue of Civil War Times Magazine offered Captain Eubanks' 1851 Colt Navy Revolver, that he had received for gallantry at the Battle of Gettysburg, for sale at auction by Historic Arms & Militaria. My repeated calls to Historic Arms & Militaria to find out who offered the gun for sale and what the value of the final bid was were not returned. The ad had revealed the estimated value of the gun would be $8,000 to $12,000.

On May 2, 2020, my sister Jane helped me connect with a friend of hers on Facebook, Rob Bennett. Rob is a Delta Airlines pilot who lives in California. he said when he has a layover in Atlanta, he often drives over to Guntersville to do historical inquiry on his ancestors from this area. Rob already had a connection the story, as his great grandmother was Margaret Bennett, Mattie Bennett Eubanks' stepmother.

In the 1990s, I worked for my brother-in-law, who had developed the Official Record of the War of the Rebellion on CD-ROM with a search engine feature. In connection to the job of selling the Official Record on CD, I traveled to many Civil War trade shows in many parts of the U.S. From that experience, I learned that a Civil War artifact, especially a weapon, would be more valuable if a story or history could be connected to the artifact. Because of that, I concluded that bidders on Eubanks' Colt Navy Revolver must have really liked his story!

After the war, Sheffield continued in politics with unsuccessful runs for Congress in 1874 and Governor of Alabama in 1882. He was elected to the Alabama State Senate in 1886.

He also had some episodes and issues with violence. On February 13, 1875, Sheffield was stabbed by Ed Richardson, a young man of 18 or 19 on the mountain above Warrenton. The wound proved not to be serious. The information was in a column in the Gadsden Times newspaper that did not give circumstances nor cause, so we are left hanging as to the reason for the incident.

In 1880, Sheffield came to odds with a man named John Bright. Bright was the brother of Sarah Ann Bright, with whom Sheffield had a long-term relationship that produced seven children. On one of Sheffield's visits to Sarah, John Bright clipped the mane and tail of Sheffield's horse.

This would probably be the modern-day equivalent of keying an expensive automobile. Sheffield was so enraged at Bright's treatment of his horse that when he caught up with Bright a few days later, he shot Bright in the leg with his shotgun. The Gadsden Times column where this account appeared said that Sheffield intended to sprinkle Bright with birdshot from the shotgun.

Bright's leg was so badly injured from the shot that it had to be amputated. There are two possible reasons for Sheffield's miscalculation. The shotgun was quite possibly a muzzleloading shotgun and it would be easy to get too much powder in the charge and the distance of the target would need to be 40 to 50 yards. Then it would still be a pretty strong sprinkle.

The State of Alabama conducts an inquiry after gunshot incidents and as part of this process, John Bright was issued a subpoena for which he did not respond. The inquiry fined Sheffield a nominal token amount and not long after, John Bright relocated to Texas.

In 1995, my sister Jane Johnson Mashburn connected with a lady in Texas, Linda Davis, doing research on her ancestors in Marshall County, Alabama. It told my sister to ask if her grandfather had an amputated leg. She responded back that, yes, he did have an amputated leg.

In 1890, Sheffield shot and killed local doctor Buck May in a dispute over May's part in the disgrace of Sheffield's daughter Andrew (this story ran in the Advertiser-Gleam on July 20, 2019). Sheffield and May had served together in the Civil War and the Census of 1880 listed Dr. May as a boarder in the Sheffield household. They had also been partners in a mercantile business in Guntersville.

Dr. May had furnished and controlled Andrew with Chloral Hydrate, a sleep medication of the day, to which she had become addicted. He forced her to attempt to burn down the house of a neighbor with whom he was feuding. She was caught in the act before any damage could be done and arrested for arson, a felony. To avoid trial for arson, her half-brother, Thomas Atkins Street, the Probate Judge of Marshall County at the time, engineered her committal to Bryce Mental Hospital in Tuscaloosa. She would spend the next 30 years, the remainder of her life, institutionalized there.

In spite of James Sheffield almost certainly signing off on her committal, Andrew had an intense pride in her father. From her letters, she wrote that "he was as near a good man as any man, even the best, and he was charitable almost to a fault."

She became noteworthy in 1993, over 100 years after her committal, by the publication of the book, "The Letters of a Victorian Madwoman." In the book, 90 of her letters are highlighted and in them she argues that she should be removed from the mental hospital and put into prison.

After Andrew was committed in July 1890, James Sheffield was tried in November for killing Dr. May and was acquitted. The records and testimony in the trial cannot be located in court records or county archives. James Sheffield died in 1892 in Montgomery, Alabama, at the age of 73 and is buried there.

Dr. Buck May is buried in the Guntersville City Cemetery.

The Guntersville Democrat (forerunner of The Advertiser-Gleam) of June 1895 said that friend of Thomas J. Eubanks wished to place a memorial tablet marking the place where he fell in the Battle of Chickamauga. The place where he fell was north of the Chickamauga Battlefield in Tennessee and possibly on private ground, making it difficult to place a marker on the site.

Dr. Pete Sparks of the Guntersville Historical Society and an authority on local history of the Warrenton area believes that members of the Eubanks family at some point remove Thomas J. Eubanks' body from the Bennett Cemetery and re-interred it at Rome, Georgia.

So it is possible that the "final journey home" for Captain Eubanks might not have been the final journey for him.

On May 20, 2020, Pete and I traveled to Rome in search of Captain Eubanks' final resting place. We checked at Myrtle Hill/Oak Hill Cemetery, Rome, Georgia, and painstakingly checked each row where Confederate soldiers are buried with no luck. The library and cemetery offices were closed because of the pandemic, so we could not secure any information from those sources.

My cousin Savina Skye, who lives in Australia, says she liked it when my stories are "to be continued." So the search for Captain Eubanks' final resting place will need "to be continued"....

I would like to thank my friends at the Marshall County Archives, who shared their insights and at times information used in this article. I was amazed at how all the facts and information began to weave together in the fabric of what I found to be an interesting narrative.

Thanks to Ty Dorman, Dr. Pete Sparks, Macey Taylor, Betty Taylor and Barbara Snow. Betty Taylor is the great-granddaughter of John Dykes Taylor, whom I quoted from his "History of the 48th Alabama."

I also must thank my sister Jane Johnson Mashburn who has patiently been my typist, editor and source of much valuable information. I joke with her that working on "my stuff" will put her master's degree in English to the supreme test.