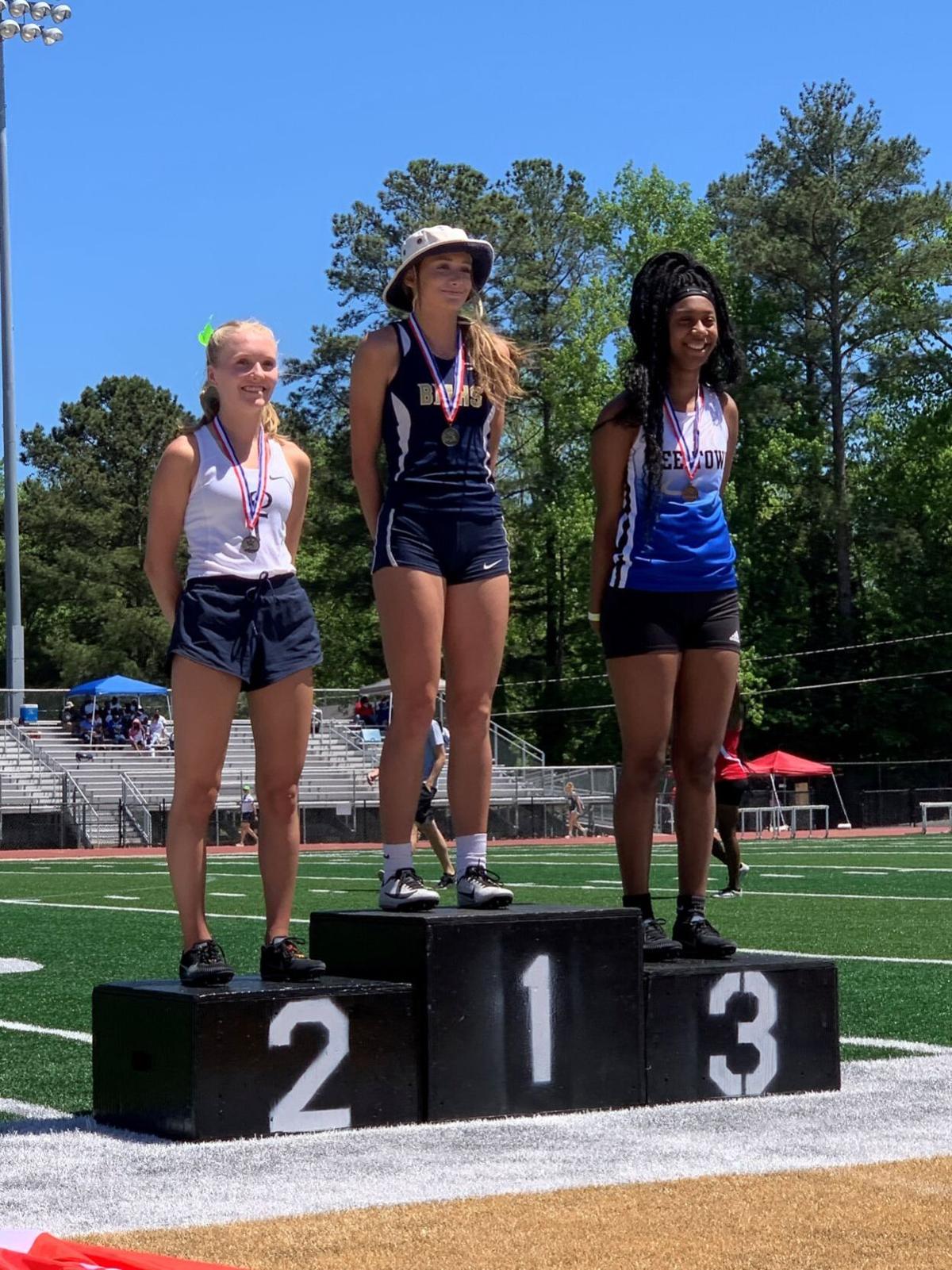 Brindlee Mountain junior Chantzley Kirkland placed 1st in the 300-meter hurdles at the state track meet last week. That's her in the center of the podium. 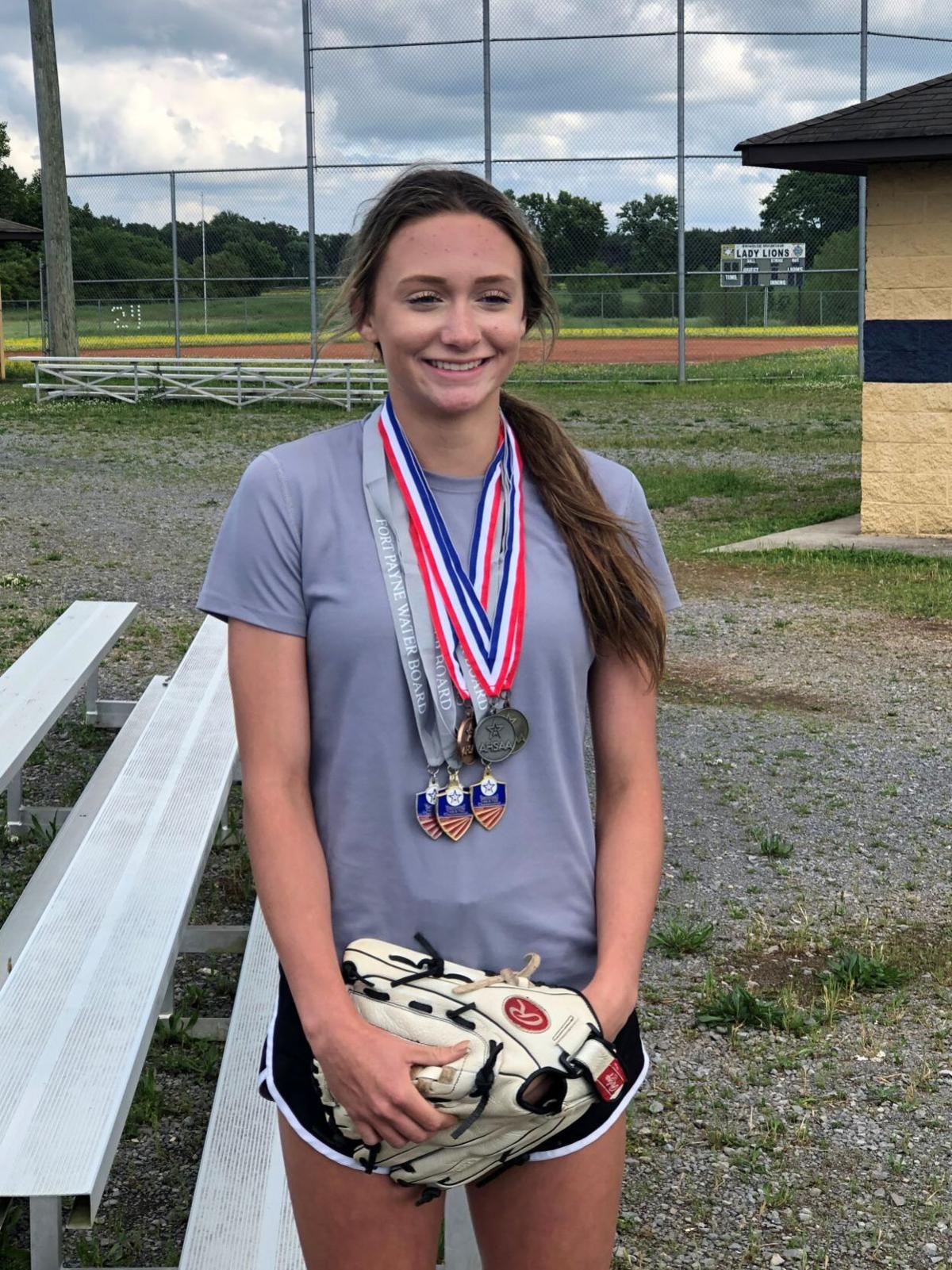 Chantzley shows off her hardware from not only the state track meet but sectionals and county as well. She's got the softball close by as the Lady Lions prepare for post season play.

Brindlee Mountain junior Chantzley Kirkland placed 1st in the 300-meter hurdles at the state track meet last week. That's her in the center of the podium.

Chantzley shows off her hardware from not only the state track meet but sectionals and county as well. She's got the softball close by as the Lady Lions prepare for post season play.

When a student athlete succeeds at multiple sports, it’s almost assumed that he or she walks around with an air of confidence.

It would be easy for an athlete like Brindlee Mountain standout Chantzley Kirkland to radiate confidence but that’s far from the truth. As a junior at BMHS, Kirkland plays volleyball, basketball, softball, soccer, cross country, AAU basketball and runs track. Without much training at all, Kirkland had a day at the state track meet last week that most athletes can only dream of having.

She placed 1st in the 300-meter hurdles, 2nd in high jump and 3rd place in long jump. She excels at all the other sports she plays and does so despite nerves and a shy attitude.

“If it’s a big event like the state track meet or a playoff game in softball, I get sick to my stomach before it starts every time,” she laughed. “I guess I just get really nervous and want to come out with a win. Personally, I want to win every time I step on the field or court and I want to represent my school well also.”

Kirkland moved to Brindlee Mountain in the 4th grade from J.B. Pennington. Her mother, Beverly, said Chantzley has been on a field or court for nearly her entire life.

“She started at really young age and hasn’t slowed down,” Beverly laughed. “She’s always been drawn to running, though. No matter what sport she’s played she’s always wanted to run. I can remember playing rec league softball games years ago and before a game she would just say, ‘I’m going to run down to the foul pole and back really quick.’ I’m not surprised she’s taken to track so well.”

The state meet took place in Cullman last Saturday. In keeping with her love for playing sports, Kirkland had something else to do that same night.

“After the state meet, we went up to Nashville with my AAU basketball team to play in the Music City Showdown,” she said. “I love basketball and always have. I’d say it’s probably my favorite if I had to choose but track has really become a favorite, too.”

Brindlee track coach Evan Lemons wasn’t even sure if he would have a track team to begin the season. He said Kirkland’s natural athletic ability is unique and allows her to succeed.

"When you are handed an athlete of Chantzley’s caliber it can make you look really good as a coach,” he said. “She’s extremely lucky to have the support from family and friends as well. Having your own cheering section everywhere you go plays a big role for young athletes knowing people are in their corner rooting for them.”

Lemons continued, “I’ve spent a lot of time working with her on form and technique, but the biggest issue with Chantzley isn’t her ability. It’s what lies between her ears. I spend more time trying to get her to believe she can do it than I do coaching.  Keeping her emotions in check and making her smile or laugh before she competes is, what I believe, is my biggest role as her coach.  For someone so gifted, she is a nervous wreck before and during any competition. I truly hope that this is proof to herself that she can literally accomplish and have anything she sets her mind to. If she ever has full belief in herself, she cannot be stopped.”

Kirkland also set several Brindlee records at the state meet last week. Her long jump length of 16 feet 2 inches is now the school record, which was held by Courtney Yarbrough. She holds the school record for most points scored at a state meet with 24, she’s the only athlete, boy or girl, in Brindlee history to be named All-State in three events. The only other Brindlee athlete to be named All-State in more than one event is none other than Coach Lemons.

Kirkland will compete in a heptathlon in Hoover this coming Monday and Tuesday.

“I haven’t even told her the records she crushed besides her individual events,” Lemons said. “She’s not even aware of some of it. The best part is she’s erasing my name from the overall record book.  I’m not one to want my name to stay atop the mountain. If my name falls because I have athletes buying into my program, I’m happy.

Lemons said with a laugh, “Every coach wishes they had athletes who stuck to 1 or 2 sports so we could have them year-round, but with Chantzley, you might get her for 20 minutes. I’m not even sure the girl sleeps.”