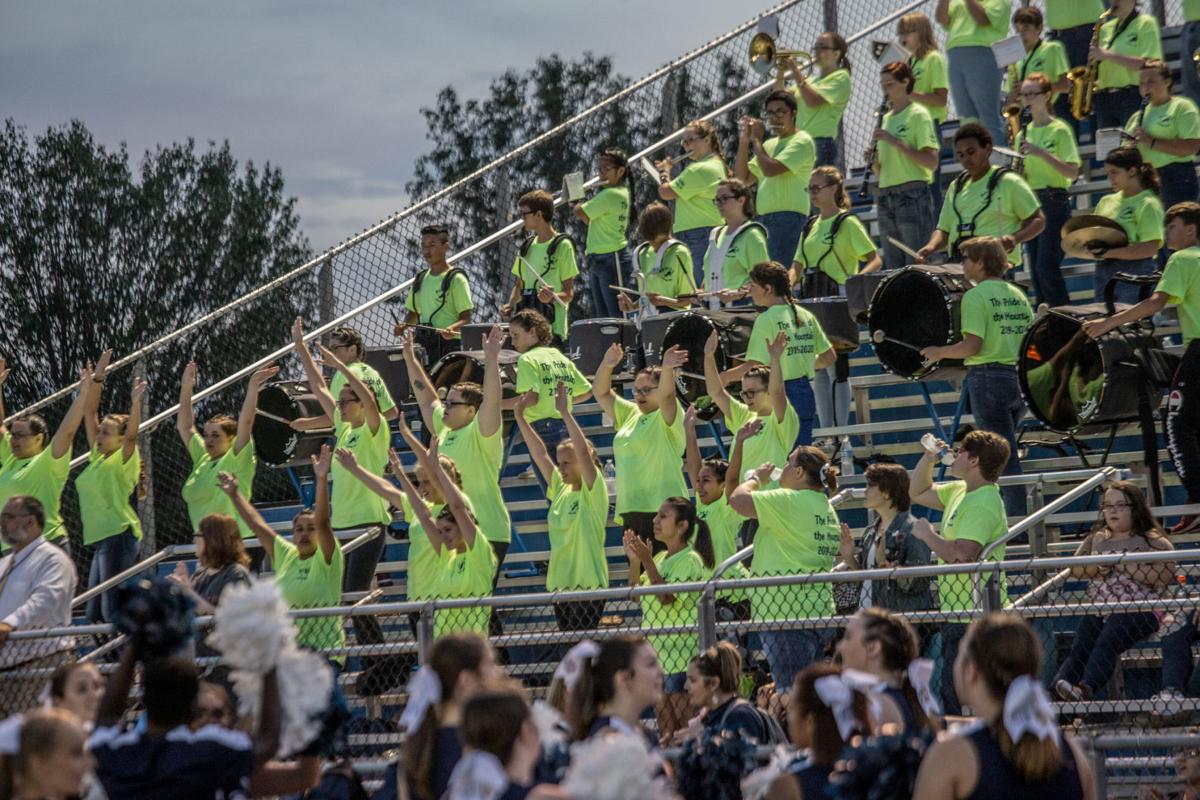 The Brindlee band performs during the Asbury game. This opener between county teams is becoming a rivalry and it was a spirited one in the first half this year. 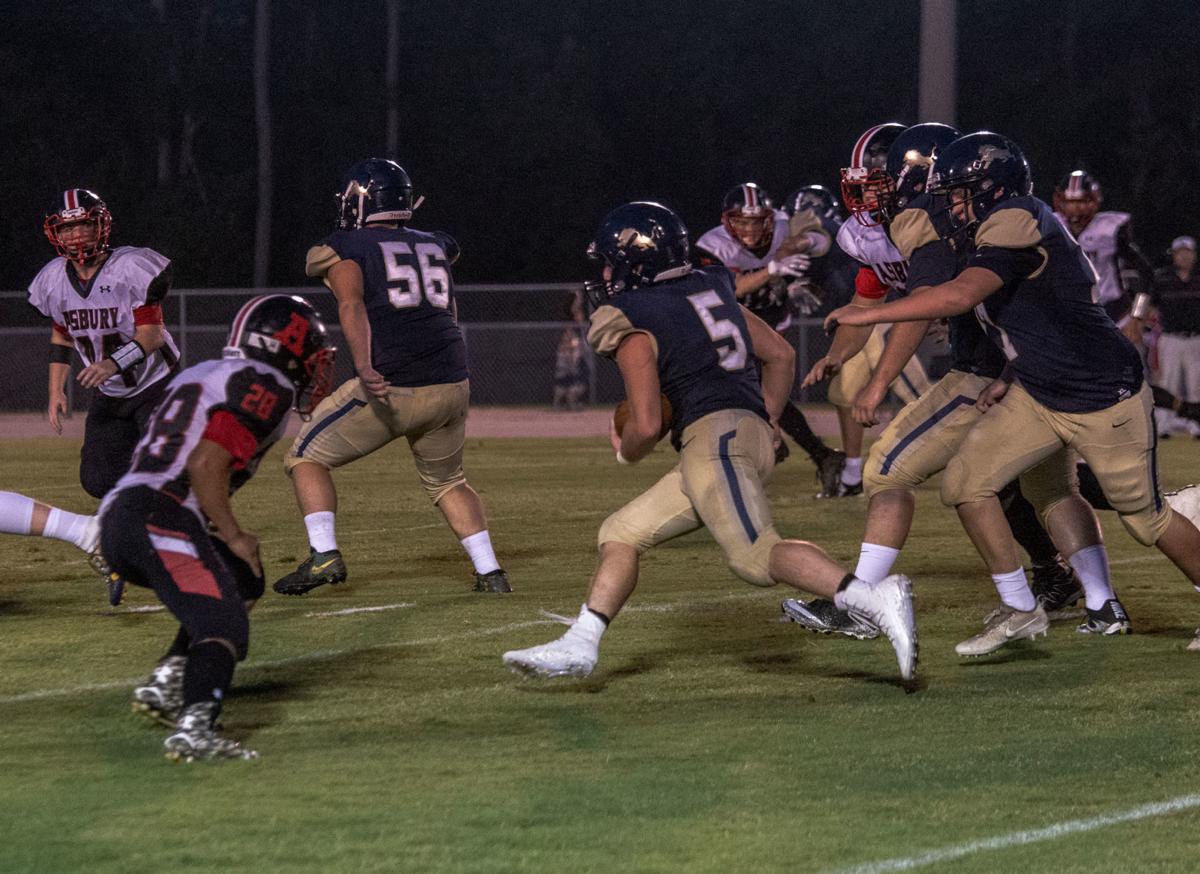 Brindlee's Zac King (5) finds a seam in the Asbury defense. 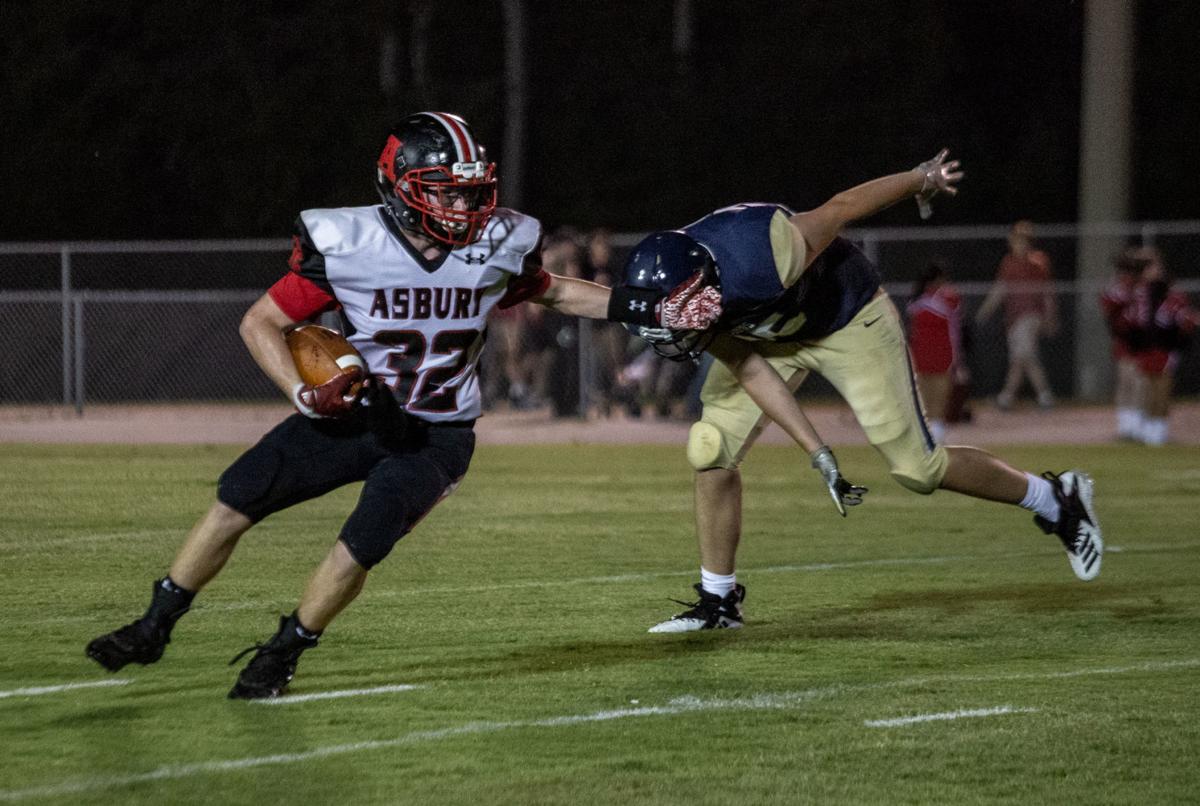 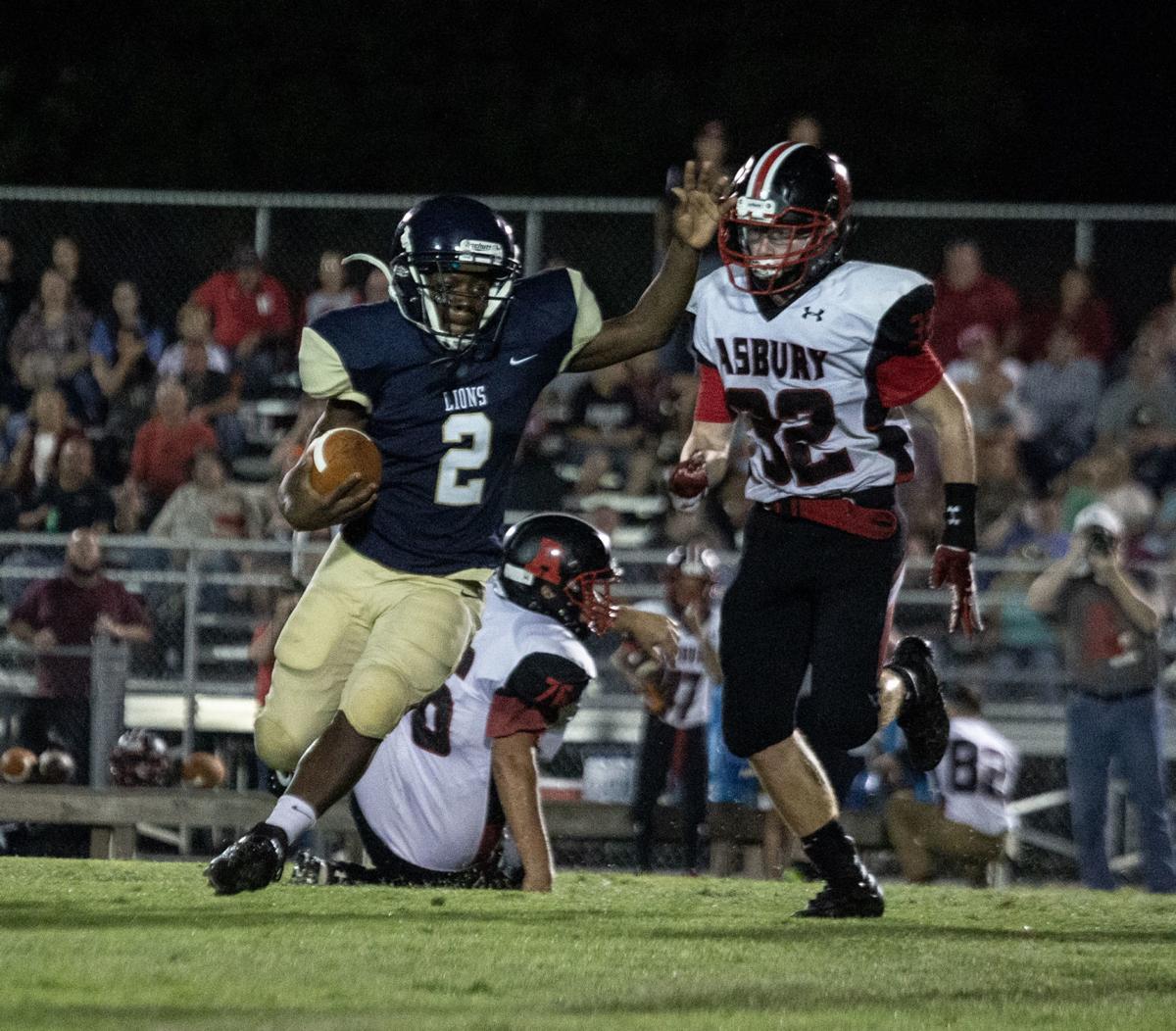 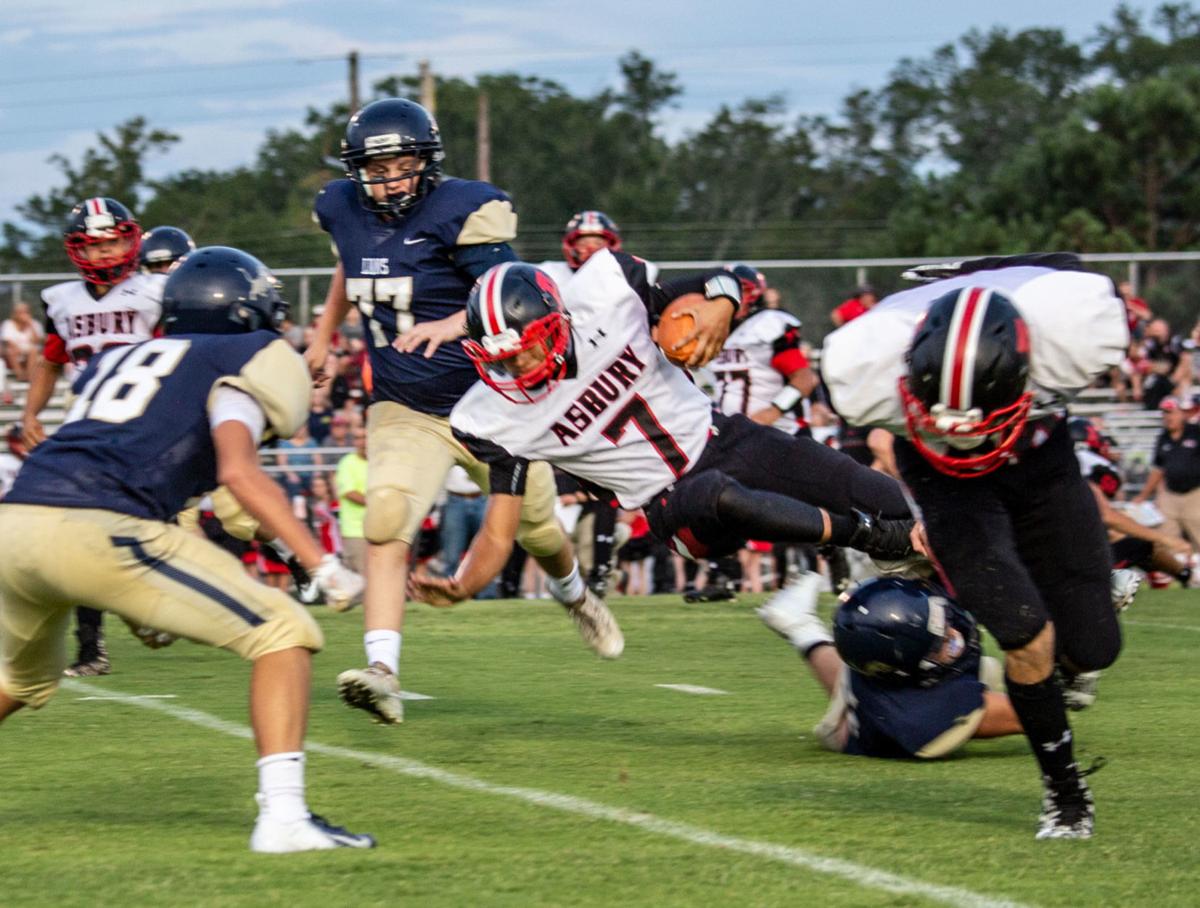 Asbury quarterback Austin Bloodworth is upended by a Brindlee defender. 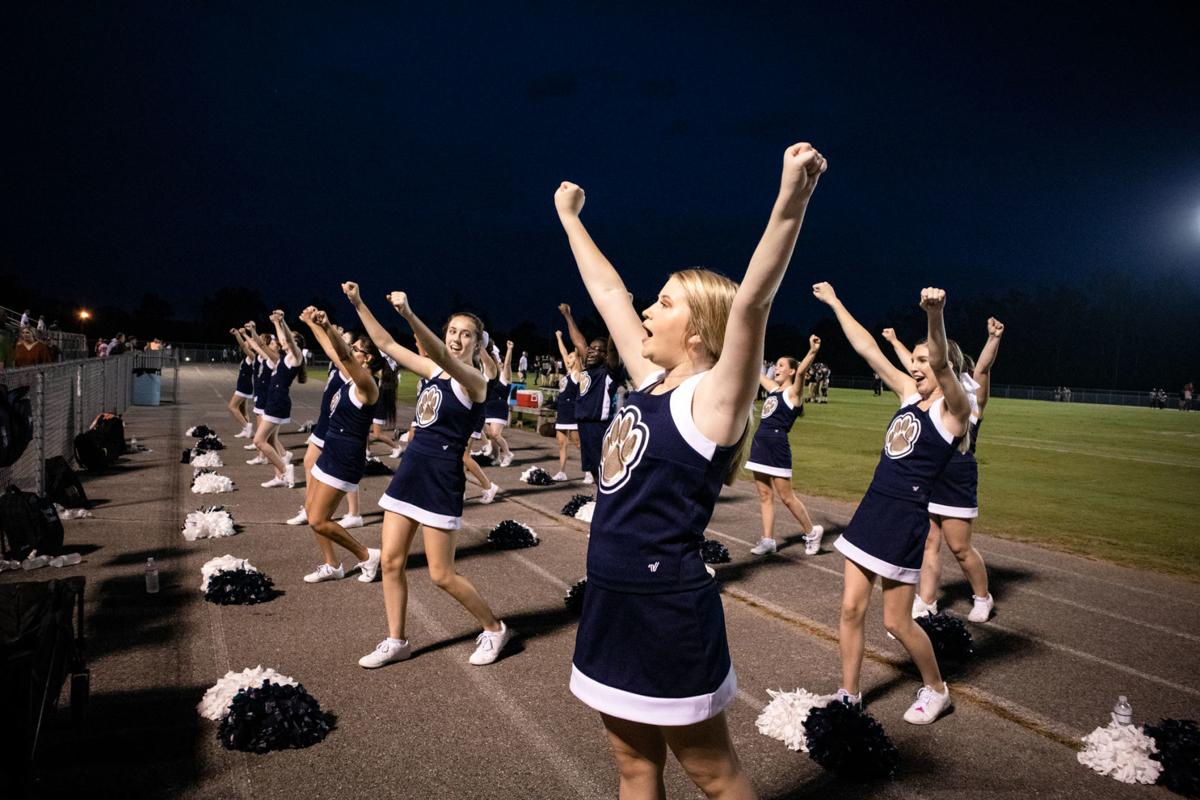 The Brindlee cheerleaders work to fire up the fans at the game.

The Brindlee band performs during the Asbury game. This opener between county teams is becoming a rivalry and it was a spirited one in the first half this year.

Brindlee's Zac King (5) finds a seam in the Asbury defense.

Asbury quarterback Austin Bloodworth is upended by a Brindlee defender.

The Brindlee cheerleaders work to fire up the fans at the game.

High School football officially kicked off in Marshall County with several regular season games, one of which was played atop Brindlee Mountain.

After a back and forth first half, the Rams eventually pulled away and won the game 35-20. The Rams put up nearly 500 yards of offense with quarterback Austin Bloodworth leading the way with 114 yards passing and 121 yards rushing. He threw for four touchdowns as well.

Asbury sophomore running back Donta Broussard also had a big night on the ground with 198 yards rushing and a touchdown.

Lions’ quarterback Will Compton led the Brindlee offense with just over 100 yards passing and two touchdowns. Both touchdowns came in the first half and were big gains.

Asbury received the opening kickoff and in just eight plays drove the ball 65 yards for the game’s first score. Bloodworth connected with Dakota Templeton on a 21-yard touchdown pass at the 9:25 mark of the first quarter. The extra point was missed and the Rams led 6-0.

Brindlee’s ensuing possession did not start out well. On the second play from scrimmage, Compton mishandled the snap and the Rams recovered at their own 46-yard line. The Rams looked to put another six points on the board and make it difficult for Brindlee to stay in the game. However, the Lions defense held strong and forced the Rams to turn the ball over on downs.

Brindlee would stall out after taking over but received a gift on the punt. Asbury’s return man did not handle the punt cleanly and as a result, Christian Adams was able to scoop the ball up and walk into the end zone for a Lions touchdown. The extra point was blocked and with 3:47 left in the first quarter, the game was tied at 6-6.

It wouldn’t be until the 10-minute mark of the second quarter until either team found the endzone again. The Rams put together a nice drive, which ended with Bloodworth connecting with sophomore fullback Skylor Justice for an eight-yard touchdown pass. Broussard would convert the two-point conversion on the ground and the Rams led 14-6.

Brindlee’s next offensive possession was cut short when Skylar Ford intercepted a Compton pass. The Rams made quick work of the mistake by scoring five plays later on a 23-yard touchdown run from Broussard. The extra point was good and the Rams led 21-6 with 4:45 left in the half. The Lions needed a big play to stay in the ball game.

The big play Brindlee needed came at the three-minute mark when Compton connected with Adams on a 50-yard touchdown pass. The Lions faked the extra point attempt and were successful in the two-point conversion.

The Lions looked to hold the Rams out of the end zone to keep the game within one score, but Asbury had other plans. With 22 second left, Bloodworth found Michael Miller on a 10-yard touchdown toss. The extra point was good and the Rams led 28-14 at the half.

Brindlee would only score one more time in the ball game when Compton hooked up with Caleb Scott on a 37-yard touchdown pass.

Coach Williams was happy with the effort of his team in the opening game.

“Obviously we’ve got a few things to work on, but overall I was happy with how the guys performed,” he said. “We had a few busted coverages on defense and then we had the mistake in the punting game. We were able to gain over 300-yards in the first half, which was very exciting for us as coaches to see.”

Asbury hosts Gaylesville this week while Brindlee travels to Southeastern.