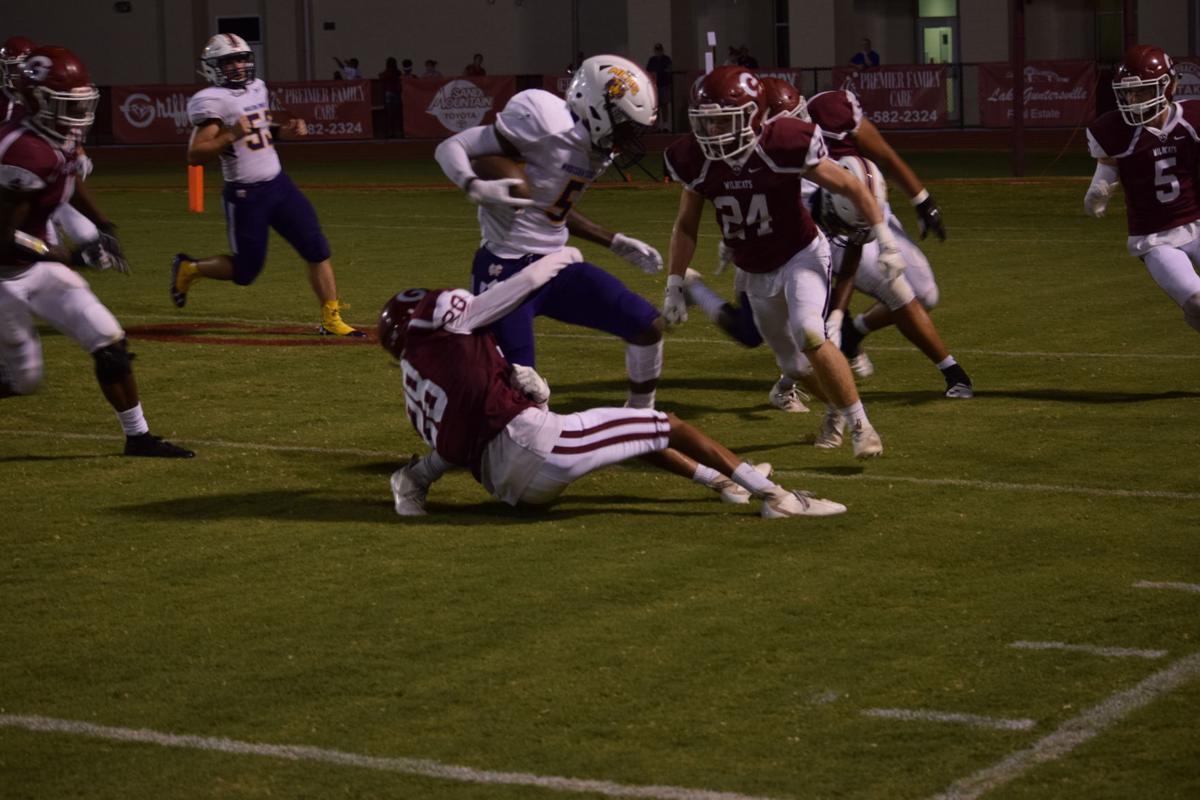 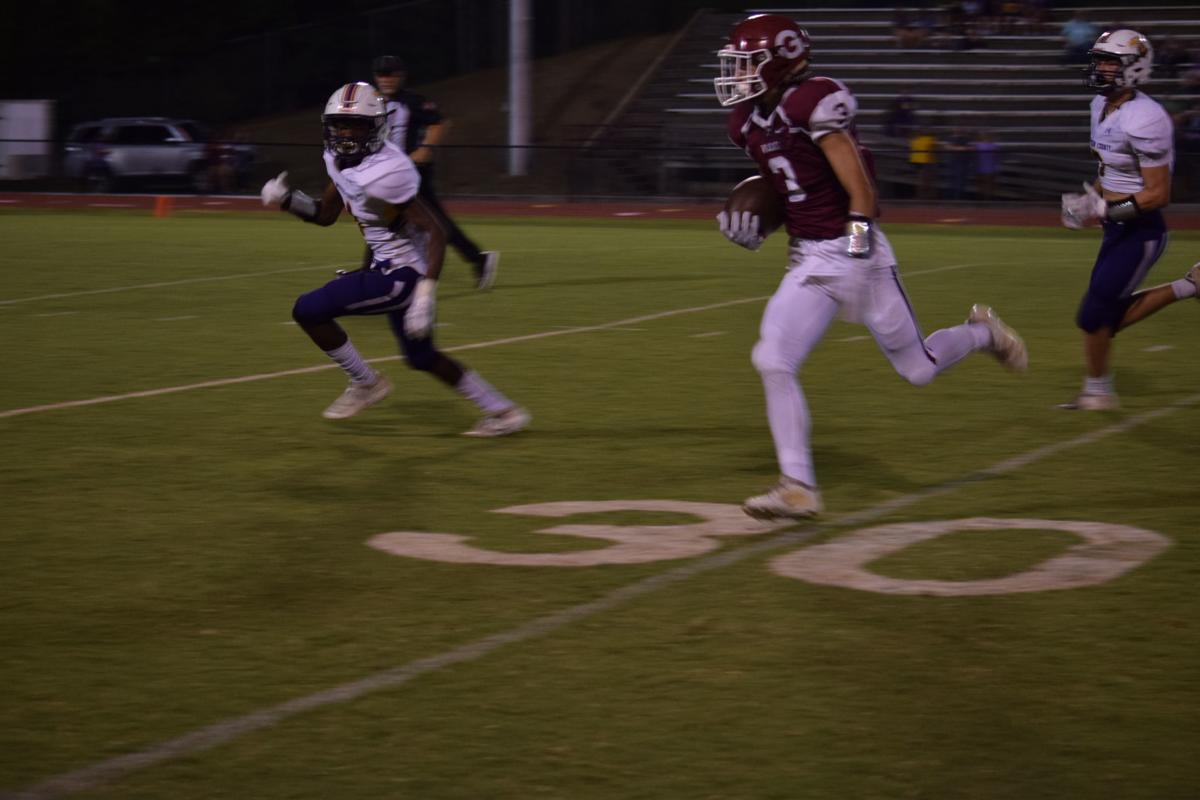 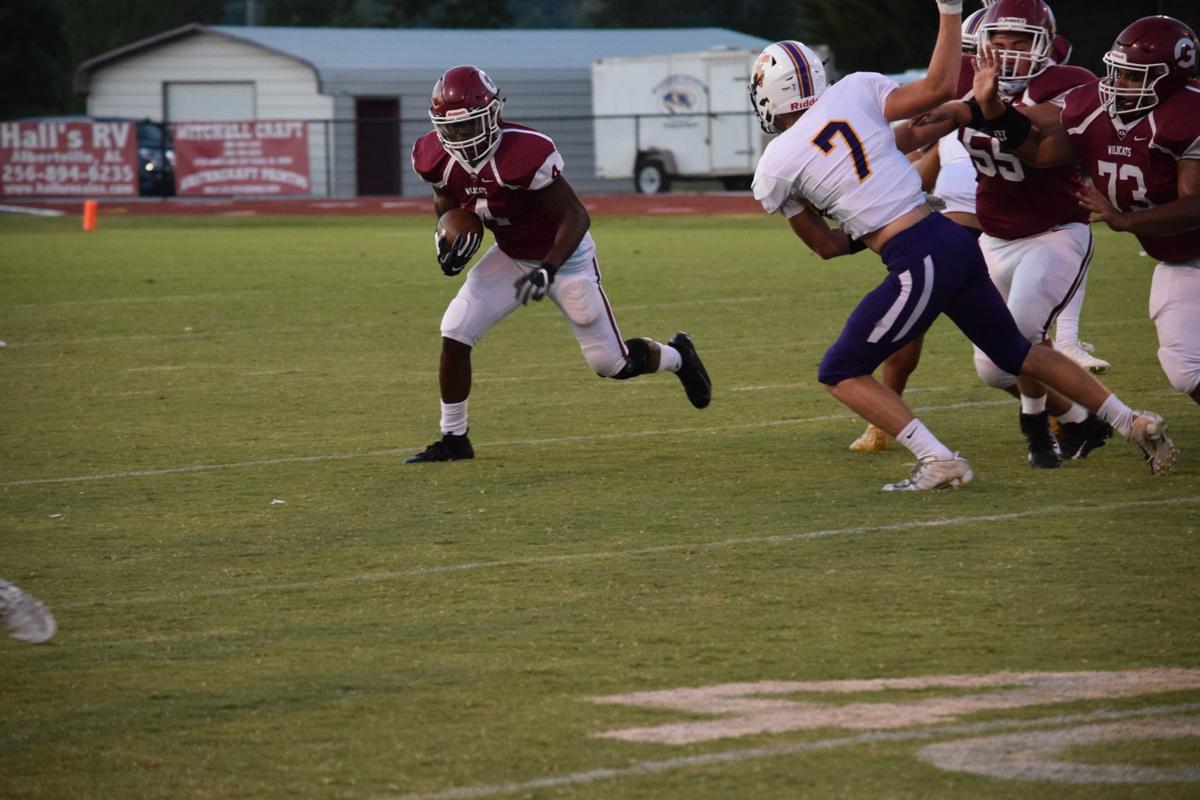 Jerrell Williamson of Guntersville (4) sprints away from a would-be Madison County tackler. 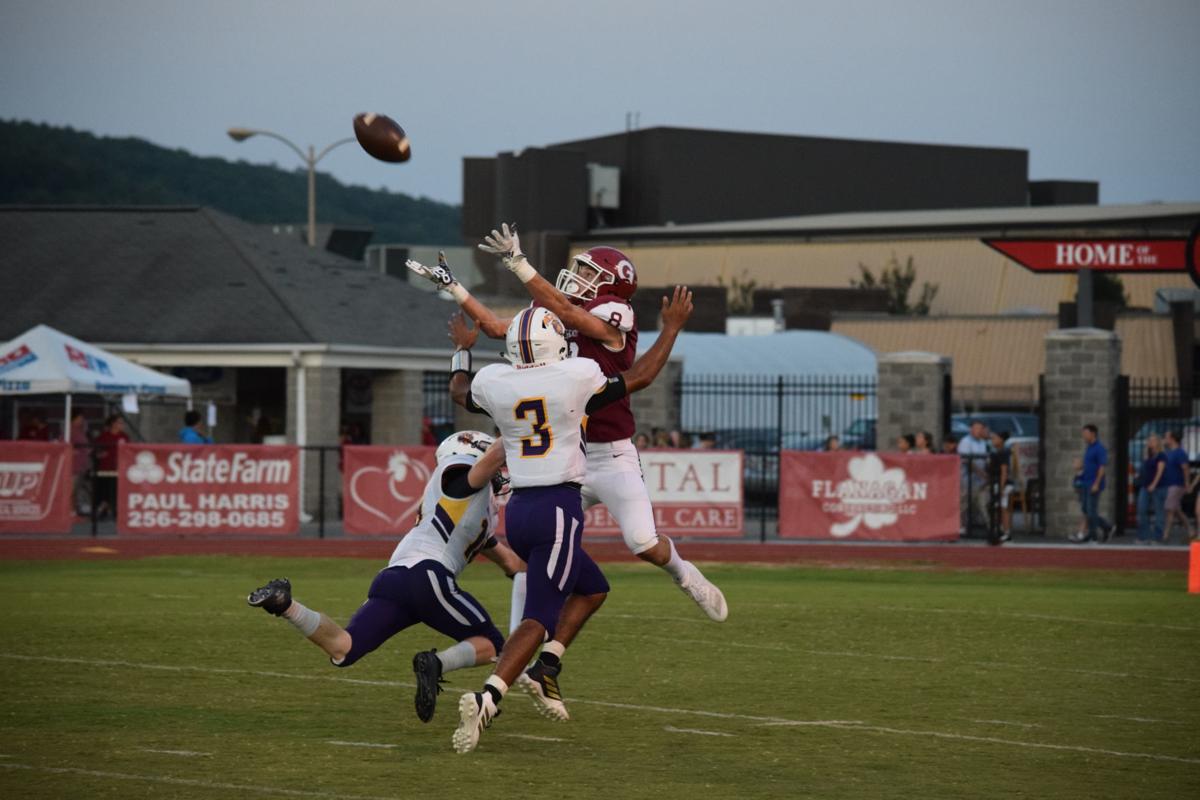 The defenders didn't turn and look for the ball and they definitely made contact with Guntersville's Jack Harris before the ball got there, but no pass interference was called on this play. Jack still got his share of receptions, hauling in 8 for 101 yards.

Jerrell Williamson of Guntersville (4) sprints away from a would-be Madison County tackler.

The defenders didn't turn and look for the ball and they definitely made contact with Guntersville's Jack Harris before the ball got there, but no pass interference was called on this play. Jack still got his share of receptions, hauling in 8 for 101 yards.

The former was true inside Chorba-Lee Stadium last Friday but the latter was not.

An offensive shoot-out broke out, but Guntersville managed to outlast the Madison County Tigers 49-42.

Madison County came into the game with a 1-1 record losing the first game to Buckhorn but knocking off Westminster 46-23.

The Wildcats were still riding an emotional high after beating Boaz 28-19 the week before with an offensive shot in the arm from transfer quarterback Zak Burnett. Burnett and the rest of the Guntersville offense looked to pick up where they left off against Madison County. Wildcats’ head coach Lance Reese knew going into the game that Madison County posed threats in every aspect.

“We’re very familiar with Madison County and know that they always have talented athletes,” he said. “They’re also very well coached every year. You’ve got to play well to have a chance to beat them.”

Guntersville picked up right where it left off following the win at Boaz. The Wildcats received the opening kickoff and drove the ball 91 yards for a touchdown. The drive was capped off with a touchdown pass from Burnett to Jack Harris for 5 yards. Pablo Rios finished the drive with a made extra point, and Guntersville jumped out to a 7-0 lead.

Madison County couldn’t manufacture any kind of offense on its first drive going three and out. Guntersville got the ball back and quickly scored on a 74 yard catch and run by Campbell Leach. Pablo was true again and the Wildcats led 14-0 with two minutes left in the 1st quarter.

The Tigers wouldn’t just lie down. They had a big play in them on the next drive – the first of many. With 30 seconds left in the first quarter, Madison County scored on a 59-yard touchdown pass and converted the extra point.

Guntersville maintained a resilient attitude the whole game. The following Madison County scoring drive was answered with a 61-yard drive from Guntersville. Logan Pate found the end zone from three yards out to put the Wildcats up 21-7.

Madison County would put together a nice drive of its own following the Guntersville score, but the Wildcat defense came through in a big way.

The Tigers were threatening in the red zone when Clay Adams grabbed an interception in the endzone. He returned the interception out to the Guntersville 13-yard line. The Wildcats would go all 87 yards and score on a three yard run from Jerrell Williamson.

Guntersville was sitting pretty with a 28-7 lead and just three minutes left until the half.

Madison County wasn’t quite done, however. The Tigers capped off an impressive drive with a touchdown just 75 seconds before the break. At the half, Guntersville led 28-14.

The second half would end up being one of the most exciting in recent memory.

The Tigers scored to open the second half, but Dewayne Hundley blocked the extra point.

The Wildcats would answer with a touchdown, then the Tigers answered with a touchdown of their own. With 5:29 left in the third quarter, the score was 35-27 in favor of Guntersville.

The Wildcats took over following the Madison County touchdown looking to extend the lead by two scores before the start of the fourth. The Tigers’ defense had other plans. Burnett made an uncharacteristic mistake when a Madison County defender intercepted a pass and returned it for 32 yards for a touchdown. The Tigers converted a two-point conversion and tied the game at 35 apiece.

The Wildcats would score again on a 70 yard drive with Pate rushing for the Wildcats’ sixth offensive touchdown of the night. The game would be sealed when Cooper Davidson intercepted a pass and returned it from 35 yards out.

Madison County would go on to score one more offensive touchdown, but it wouldn’t be enough. Guntersville won the game 49-42 and improved to 2-0 overall and 1-0 in the region.

“It was great to get our first region win at home against a very talented Madison County team,” Reese said. “We had a big night on offense passing the ball.”

Reese wasn’t exaggerating. Burnett broke the Guntersville High School record for passing yards in a game with 362 yards. The Wildcats had a total of 543 yards on offense.

“I was very happy to see Zak break the school record for passing yards,” Reese said. “We were able to get all of the receivers involved against Madison County.”

Hundley led the Wildcats in tackles and Pablo Rios was 7 of 7 on extra point attempts.

Guntersville travels to Scottsboro this Friday for another region match up.