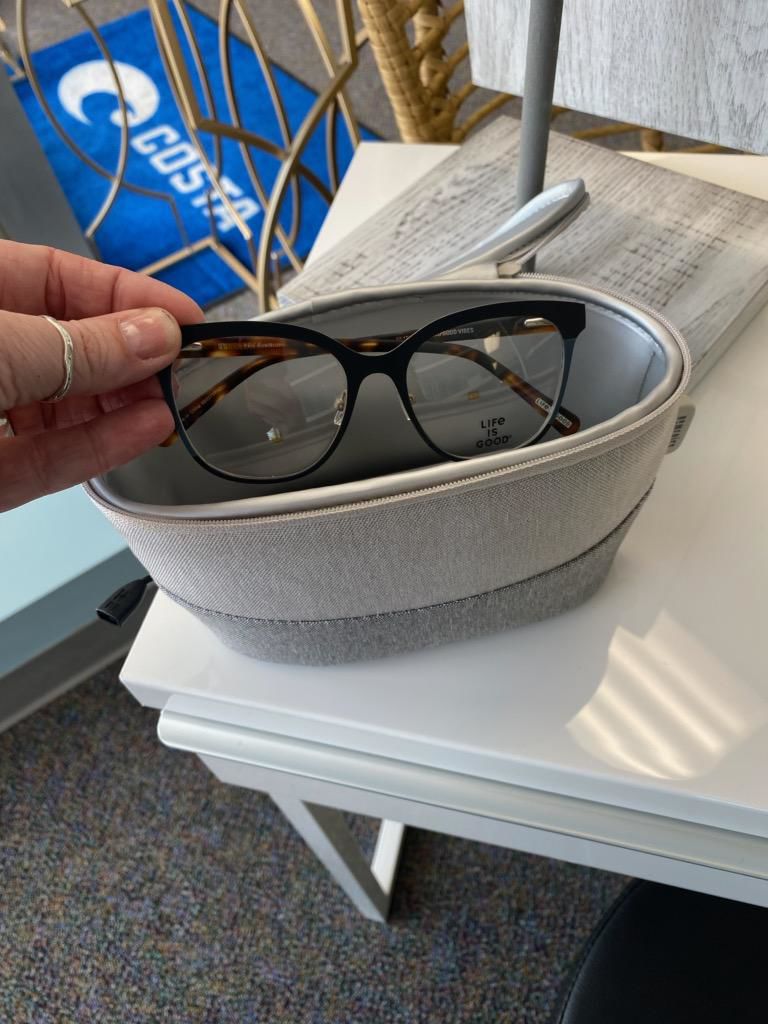 This portable sanitizing box is being used by Eyes on Guntersville and it kills up to 99.9 percent of bacteria and viruses. Each pair of frams a customer tries on will be sanitized this way. 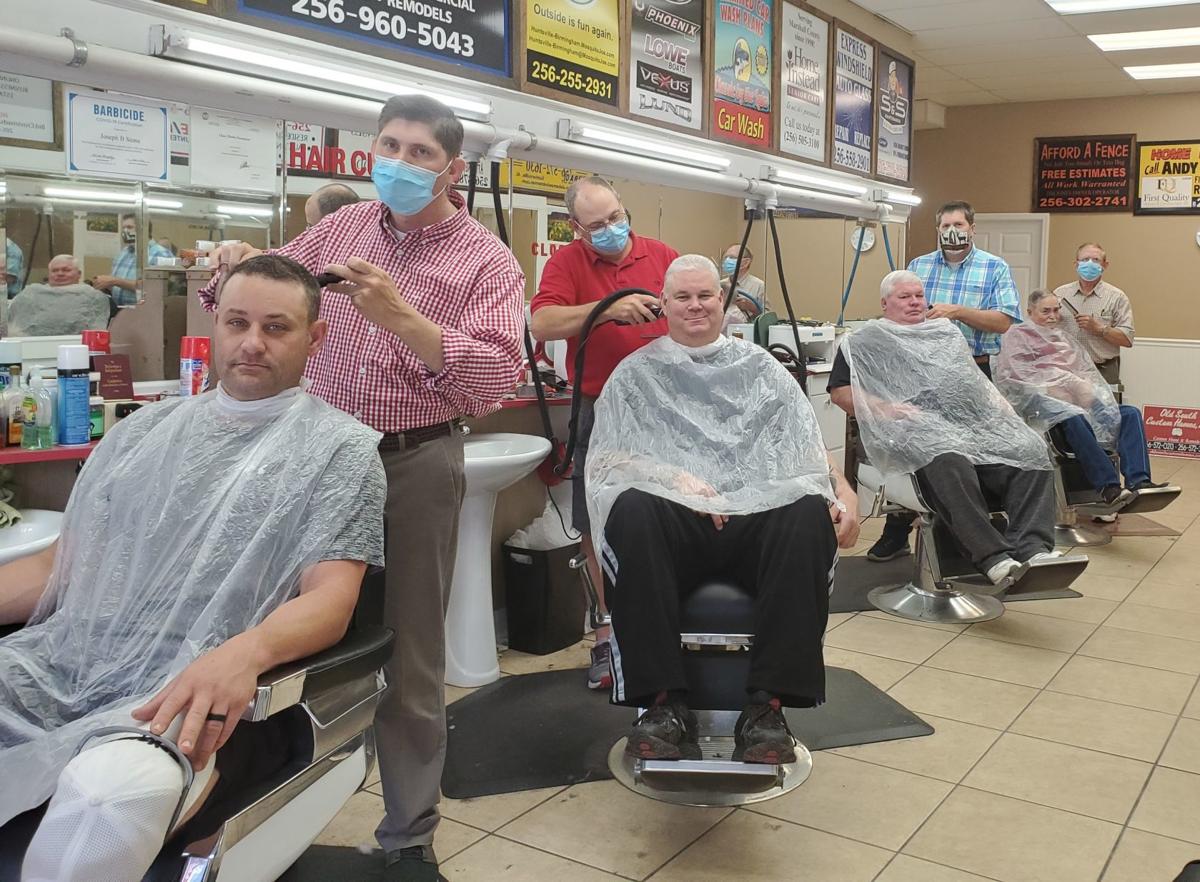 Barber shops were among those closed by the COVID-19 shutdown. So lots of men were needing haircuts when Barnes Barber Shop re-opened this week. From front to back are barber Brandon Stone and Scott Smith, barber Daren Barns and Chris Hovey, barber Aaron Stone and Donald Babb and barber Colin Barns and Bob Burlbaugh.

This portable sanitizing box is being used by Eyes on Guntersville and it kills up to 99.9 percent of bacteria and viruses. Each pair of frams a customer tries on will be sanitized this way.

Barber shops were among those closed by the COVID-19 shutdown. So lots of men were needing haircuts when Barnes Barber Shop re-opened this week. From front to back are barber Brandon Stone and Scott Smith, barber Daren Barns and Chris Hovey, barber Aaron Stone and Donald Babb and barber Colin Barns and Bob Burlbaugh.

Business is returning to downtown Guntersville following the COVID-19 shutdown that shuttered small business. For the people who work it these businesses, it was exciting to see th people on the streets again. The parking lots and city streets have been empty for several weeks with only a few cars, but that is changing.

Here's what we found in an informal survey of downtown businesses:

Our first stop was Mosley Monogram. Owners Meri Lyn Mosley said the opening has been going great. Most of the customers have been wearing masks, she said. They have been open since the shutdown, but the shop was only doing curbside service.

Mosley said she is glad to be back. During the whole shutdown, she explained that it made her really appreciate her customers and made her more thankful for each and every one of them.

Mosley's does not only have monogramming, apparel and gift items, but they also have The Mosley Real Estate Group. That business did not suffer. In fact, this business has been doing extremely well.

Right now, Mosley explained, the real estate business is still booming. The cost of local houses and attractive financing rates are making it a good time to buy.

Guntersville Outfitters was considered an essential business, so they never shut down. Owner Chris Stanley said he has had a lot of people purchasing bikes and their sales have not slowed down.

The store still has a lot of merchandise, but they do not have as many entry level bikes.

Stanley said they're considering some new programs such as a ladies cycling group and a few other bike education classes.

Because Streamline Cleaners was considered an essential business, they did not shut down either. LouAnn Patton said their business has picked up since the re-opening of other businesses. She believes that it is because a lot of people are going back to work.

She said with the shutdown, their business had been down about 50 to 60 percent, but it is picking back up.

Streamline Cleaners celebrated their 50th anniversary during the pandemic. She and her husband Scott wanted to let everyone know how much they appreciate their long-time customers

Owner Barbara Sedberry of Studio 509 sad she is glad to be back in business. She is spacing everyone out and keeping the social distancing between clients as required.

Because of the nearly two months of shutdown. Sedberry said they are very happy to be able to get back to work and glad for all of the people coming in to get their hair done.

Sedberry is grateful for all that have come in the shop and is looking forward to seeing even more.

Owner Susan Perry said they are not ready to open the store just yet for the public. She is getting guidance through seminars from the home office on how to keep the studio sanitized. Even though they have always sanitized, they are doing more because of the coronavirus.

Perry said said they are still doing curbside and mail orders. She does not know when they will be opening, but she looks forward to seeing her customers again.

Blossom Boutique is a woman's clothing store and has been in business a year.

Owner Ashley Mastin said before they opened the doors two weeks ago, they offered curbside services. During the shutdown, Mastin said Blossom Boutique launched their website.

Mastin planned on an anniversary party, but with the restrictions she was worried about the dangers of spreading coronavirus, but is grateful to be open again.

Bubba's II re-opened two weeks ago, owner Bubba Martin said. It has been extremely busy since they were able to open their doors on May 1. He is very grateful for everyone supporting their local business.

With the opening, he had a sale going on which he said was probably helping get customers back through the doors.

Unfortunately he admitted that with the shutdown, every business has suffered and probably will continue to suffer for several years to come. He said after being shut down for so long, it will be impossible for retailers to make up what they lost. He just hopes the small businesses survive.

He said they are all in survival mode right now. He does not know how all the small businesses will survive, but owners will need to keep their noses to the grindstone to find a way to gain more business.

"We will have to keep fighting the good fight," he said.

Their store is back to normal hours and will be open for Memorial Day. He said they will be around more during the summer months and during the holidays.

He wanted to wanted to wish the best for the other local shops and tell them to remain faithful as well. They are in this together and will make it. He has been worried about his neighbors throughout the pandemic.

With the close contact of the therapist at The Soak House & Soapery, they are sharing on social media their new ways of sanitizing. Spa manager Erika Phillips said they are not changing too much because they have always been clean and sanitize after each client, but they are doing more and will be stopping the self-serve tea area.

Phillips said they are taking a lot more precautions  to keep the staff and public safe. Even though they will be taking the extra precautions, they are still going to have the relaxed atmosphere.

She said The Soak House and Soapery is ready to help more people relax in these crazy times.

Eyes on Guntersville is back open, but they are doing eye exams by appointment only. Receptionist, optometric technician and optician Amy Green said they are checking the temperatures of customers when they walk in the door and they are spacing out the clients.

The office has always sanitized after clients, but they are taking it a step further. They ordered a frame cleaner. After each client looks through the frames, they will clean them in a special box with sanitizer.

The barber shop has been going nonstop since they were able to re-open the doors.

"We've been covered up, but no one is complaining," said barber Brandon Stone.

"No one is complaining much," Daren Barns laughed. "We are glad to be back, really."

They had been off work for seven weeks and one joked that they have been off in the head for years.

The barber shop looks a little different because of social distancing, but there is still room to sit down to wait on a haircut. They have several chairs outside as well if there is not enough room inside.

It is spread out and they are going by the state guidelines because they want to be able to keep working.

Each barber is wearing a face mask and the customers are wearing disposable capes. They will continue to do it this way until the restrictions are lifted.

The guys wanted to thank Judy Barnes, Colin's wife, for taking care of the phones, cleaning and doing anything and everything that needed to be done besides the haircuts. Brandon said she has been keeping them fed by going to get lunch and has just been a big help around the shop.

Daren Barns said they have had so many people that a lot of them have had to leave. It has just been that busy with a steady stream of people coming in to get their hair done.

Colin said Wednesday was a little slower. By that he means he was able to sit down once.

"For an old man, sitting down once was good. I'm enjoying being busy though," he said.

If there is anther shutdown, the men agree, a barber shop should be considered an essential business.

Brandon said he wishes he would have had his camera for a few of the clients to show their transformations. One man walked in with long hair and a long beard and after a haircut and a shave, he looked like a totally different person.