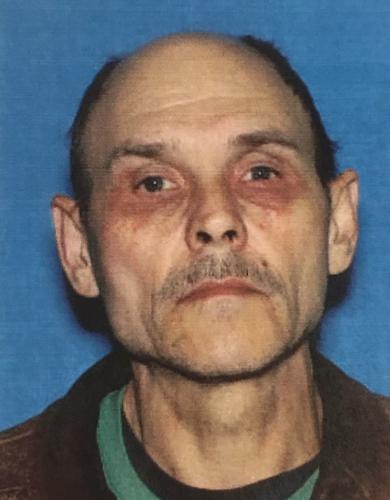 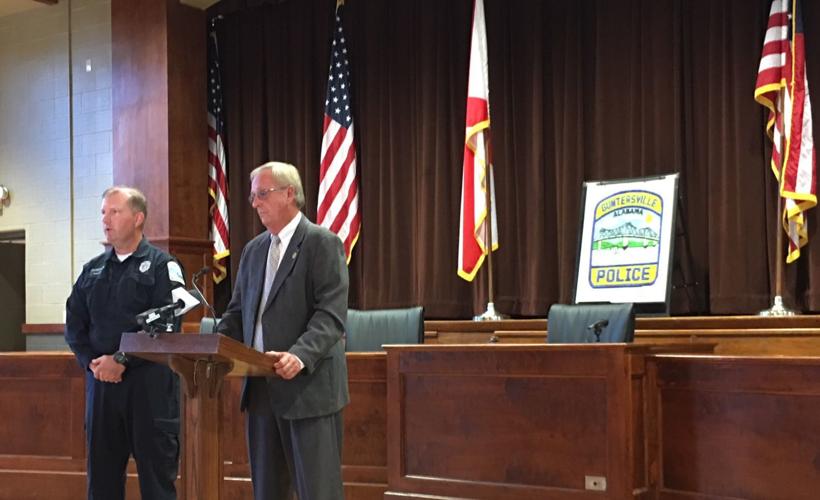 Guntersville Police Chief Jim Peterson and chief DA's investigator John Young announced Tuesday that a man had been charged in a triple homicide in a triple murder on Mulberry Street.

Guntersville Police Chief Jim Peterson and chief DA's investigator John Young announced Tuesday that a man had been charged in a triple homicide in a triple murder on Mulberry Street.

Guntersville Police announced Tuesday that a homeless man who’d spent most of his adult life in prison has been charged with four counts of capital murder related to three victims in deaths discovered July 13 on Mulberry Street in the Mill Village section of Guntersville.

Chief Jim Peterson said Spencer is originally from Franklin County but had been in the Guntersville area since about January, sleeping on park benches and occasionally in a motel room. The chief said Spencer had spent more than 20 years in prison on burglary charges. It's thought he had been in and out of the neighborhood where the murders took place.

On Friday, July 13, at 4:36 p.m., the bodies of 74-year-old Marie Kitchens Martin and her 7-year-old grandson were found in her home at 2402 Mulberry Street, behind Burger King. Family members later said they both suffered blunt force trauma and that Martin was also strangled.

The officers had been on the scene a little over an hour when a neighbor told them no one had seen Reliford, 65, in about a week. She lived across the street from Martin at 2321 Mulberry Street. Officers entered the home and found her dead too. She was known to have health problems, including cancer, and Chief Peterson at the time termed her passing an “unknown death." But autopsy results Monday indicated she too had been murdered.

Both Peterson and chief District Attorney’s investigator John Young said the police work that went into cracking the case was unlike anything they’d ever seen. Guntersville investigators and officers worked nearly around the clock and got help in their probe from officers with the Arab, Albertville and Boaz Departments.

“42 hours and 16 minutes after we arrived at the scene for the first time, Spencer was taken into custody,” Peterson said.

He said they’d developed multiple persons of interest during the course of the investigation.

“It was God’s blessing that led us to Spencer,” he said.

Peterson said he was certain “we have the right man.”

The next step will either be presenting the case to a grand jury or holding a preliminary hearing, said District Attorney Everett Johnson. He also explained the four counts for three victims:

Count 1: Capital Murder: Murder of Marie Kitchens during the course of a robbery.

Count 2: Capital Murder: Murder of Colton Lee, who was under the age of 14.

Count 3: Capital Murder: Murder of Marie Kitchens and Colton Lee, murder of two or more persons at the same time.

Count 4: Capital Murder: Murder of Martha Reliford during the course of a robbery.

Johnson said the object of the robberies was money. He said the case has been put on the docket for a preliminary hearing on Aug. 8.

Young said he’d been in police work for 35 years and had never seen anything like the effort that went into this investigation.

A fourth death was discovered about the same time as the ones on Mulberry Street and only two blocks away. James Michael Baker of Albertville was found dead in a ditch off the levee behind the Guntersville Rescue Squad. A popular walking trail runs along the levee and Peterson said it appears Baker’s death was due to natural causes.

But he did say that presented another challenge for his investigators as they were dealing with the three other deaths on Mulberry Street.

“There were so many directions this thing could have gone,” he said.

He said the three murders “are not indictive of Guntersville” and said everyone has a hard time remembering the last time Guntersville Police worked a single murder case. The deaths had put the city on edge with people wondering just what had happened and showing concern that a killer was still on the loose.

Funerals for Martin and her grandson were Thursday.