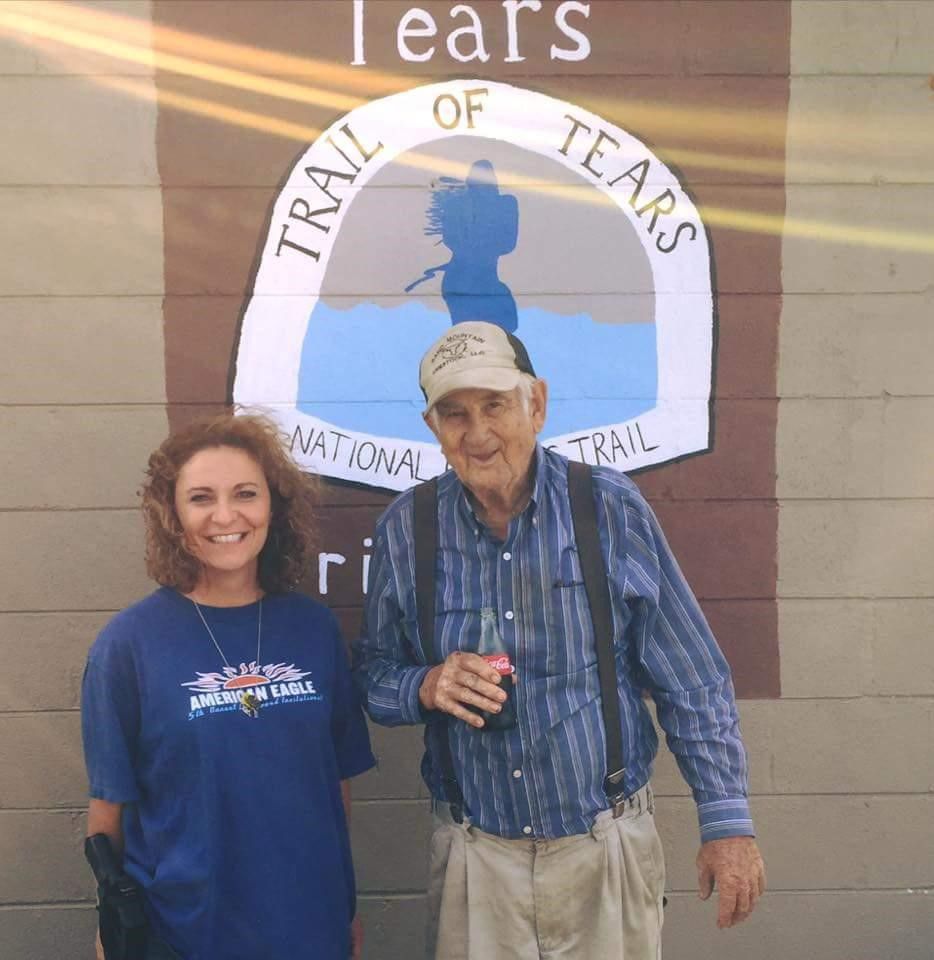 Jamie Godwin (left) is the owner of the Grove Oak store outside of Buck's Pocket State Park. She painted the Trail of Tears sign on the side of the building. She's pictured with her 93-year-old great-uncle Wynell Godwin. 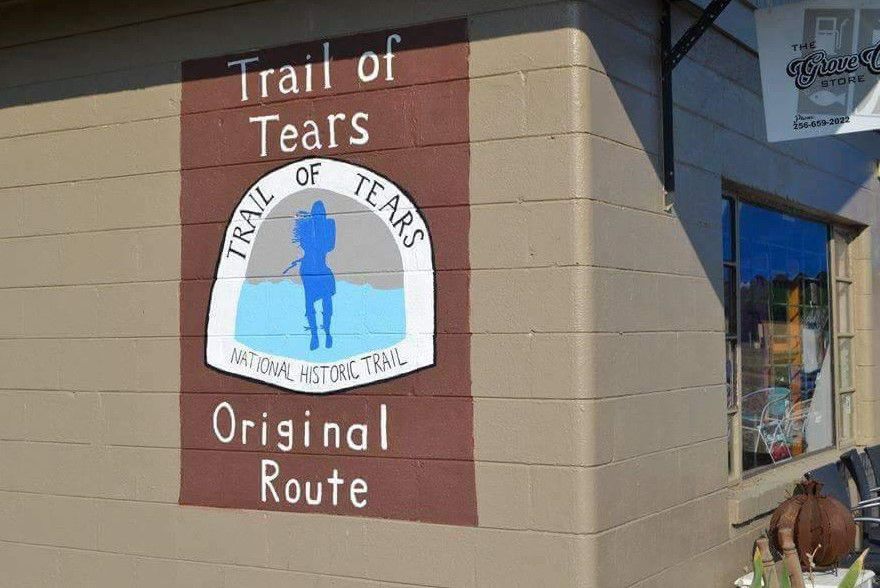 Jamie Godwin, owner and operator of the Grove Oak Store outside of Buck's Pocket, painted this mural of the Trail of Tears sign on the building after the street marker was stolen. 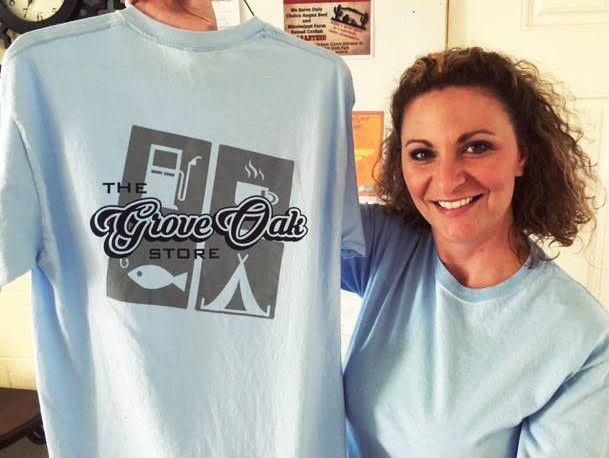 Ms. Godwin re-opened the Oak Grove store outside of Buck's Pocket in 2013. She's originally from Grove Oak and spends a good bit of time at Guntersville State Park with her 3 sons.

Jamie Godwin (left) is the owner of the Grove Oak store outside of Buck's Pocket State Park. She painted the Trail of Tears sign on the side of the building. She's pictured with her 93-year-old great-uncle Wynell Godwin.

Jamie Godwin, owner and operator of the Grove Oak Store outside of Buck's Pocket, painted this mural of the Trail of Tears sign on the building after the street marker was stolen.

Ms. Godwin re-opened the Oak Grove store outside of Buck's Pocket in 2013. She's originally from Grove Oak and spends a good bit of time at Guntersville State Park with her 3 sons.

Buck's Pocket State Park is known throughout Marshall County and even across the state as a peaceful and scenic campground.

The park is shared by 3 counties, Marshall, Jackson and DeKalb.

In November of 2015, the park campground closed and it became an "unmanned" park.

From then on, Grove Oak resident Jamie Godwin has made it her mission to see the park completely re-opened to restore flow of tourism to her community.

She moved back to her hometown in 2013 from Wetumpka with her 3 boys.

“My boys and I came up here to visit when we were living in Wetumpka,” Ms. Godwin said. “We were camping down at Buck's Pocket and needed marshmallows. So, I had to drive 15 miles to the nearest store to get some.”

A familiar location - and the inconvenience of the trip for marshmallows - inspired her to make a big life change.

“I got out of Buck's Pocket and saw the old store closed up,” Ms. Godwin. “It was at that moment I decided I wanted to come home and re-open the store.”

She went to work quickly and found out who owned the building. Soon after, Ms. Godwin was the rightful owner and new operator of the Grove Oak Store.

“My goal was to open the store to revitalize the area and give tourists an option for food and other camping needs,” she said. “We were in the process of figuring the cost of getting gas pumps put in when the April 2015 park closings announcement happened.”

Ms. Godwin said the potential closing and eventual status of the park has hurt business at the store but she’s not letting it keep her from serving the community.

Since Buck's Pocket closed, Ms. Godwin and her children visit and camp at Guntersville State Park quite a bit.

“I’m confident Buck's Pocket will one day be fully re-opened once again,” she said. “And when it does, the Grove Oak store will be here for this community and the people visiting.”

The old store needed a good bit of work done to the inside and outside when Ms. Godwin took it over.

Since buying the building, Ms. Godwin has made modifications as well as put her own touch to the store’s look and feel.

“I have Cherokee Indian heritage so naturally I wanted some Native American pieces in the store,” she said. “I built a small Native American display in the back of the store complete with an authentic head dress, arrow heads and other neat artifacts.”

“I was given a quilt anonymously while in South Dakota,” she said. “When I got home I found a note from a Cherokee Indian. I put that quilt in the display case also.”

Grove Oak and specifically Dekalb County Road 402 is part of the Trail of Tears. The trail ran from there to what is now Lake Guntersville State Park.

Historian Larry Smith of Guntersville was instrumental in getting that part of the trail recognized and designated with historic markers.

The Trail of Tears markers can be seen all through the area. Ms. Godwin said she’s noticed a problem with the signs disappearing.

“There used to be a Trail of Tears marker directly in front of the store,” Ms. Godwin said. “Then one day I noticed it had been stolen too. I understand the desire to have one of the signs. It’s a very cool design but the signs need to be up.”

When she found out it would a long time before the signs could be replaced, she decided to act.

Ms. Godwin saw the outside of the Grove Oak store as a blank canvas.

“I decided to paint the trail of tears sign on the side of the building,” she said. “Painting is a hobby a picked up not too long ago. I’m not professionally trained or anything. I just enjoy it. The mural of the sign took me a month to complete.”

Ms. Godwin also opens the store up to people in the community as a place for artistic expression.

Once a month she hosts a singer-song writer night at the store.

“I just want kids in this community to have a place to go and paint, draw or play music,” she said. “I have several paintings hung up by kids around the community. I love having people come in a play music also.”

When Ms. Godwin moved back to Grove Oak she intended to make a difference.

She couldn’t be closer to her and store and the community. Ms. Godwin and her sons are tiny house residents. Their home is located directly behind the Grove Oak Store.

“I kind of consider myself the unofficial mayor of Grove Oak,” she laughed. “I grew up here and most of my family still lives here. I want to see this community progress and until Buck's Pocket opens again, the Grove Oak Store will be here.”