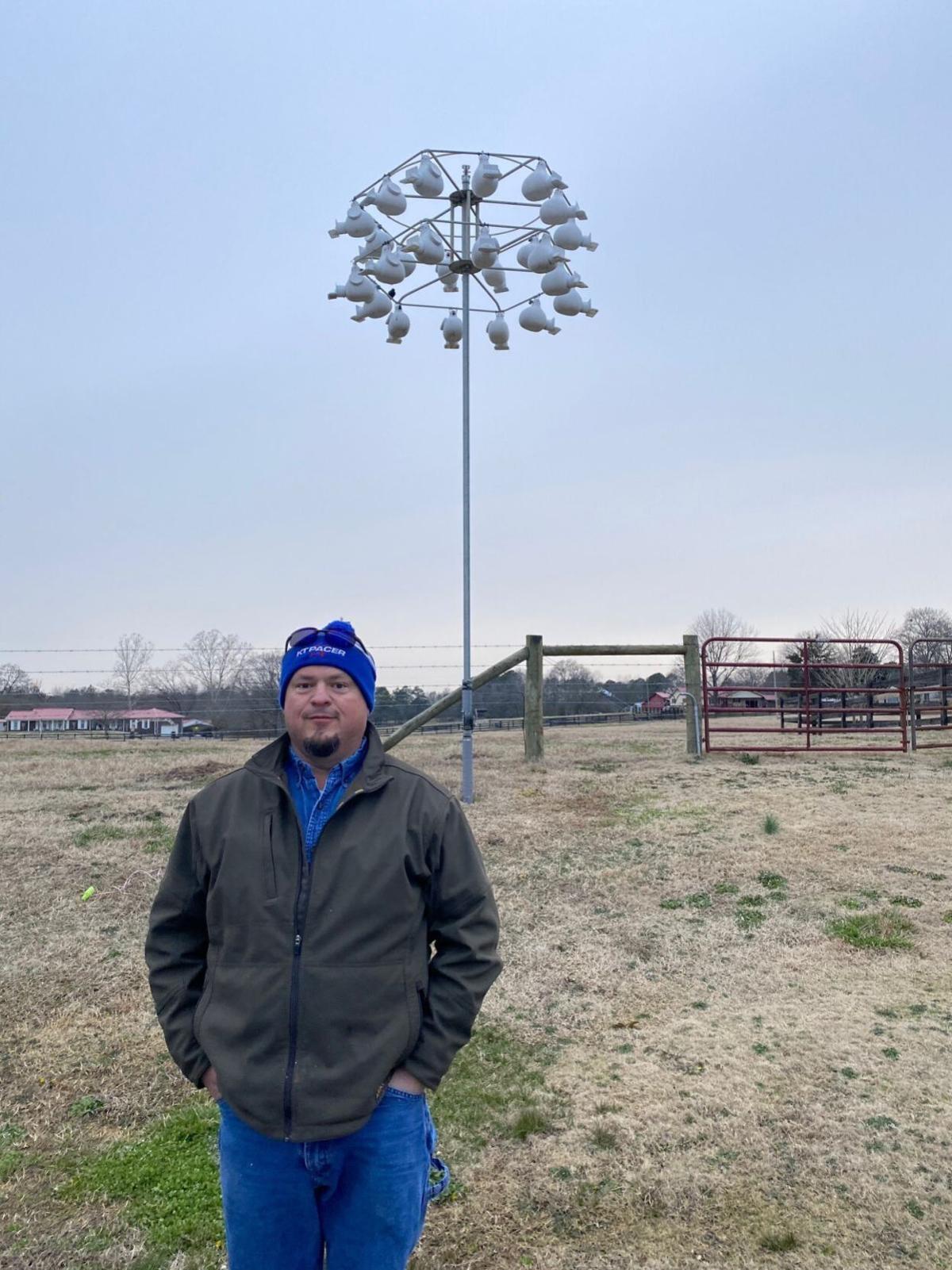 Brad Biddle loves purple martins and has multiple racks of plastic martin gourds. One early martin arrived before this week's freezing weather and he saved it from the cold weather by flipping crickets and worms to him. 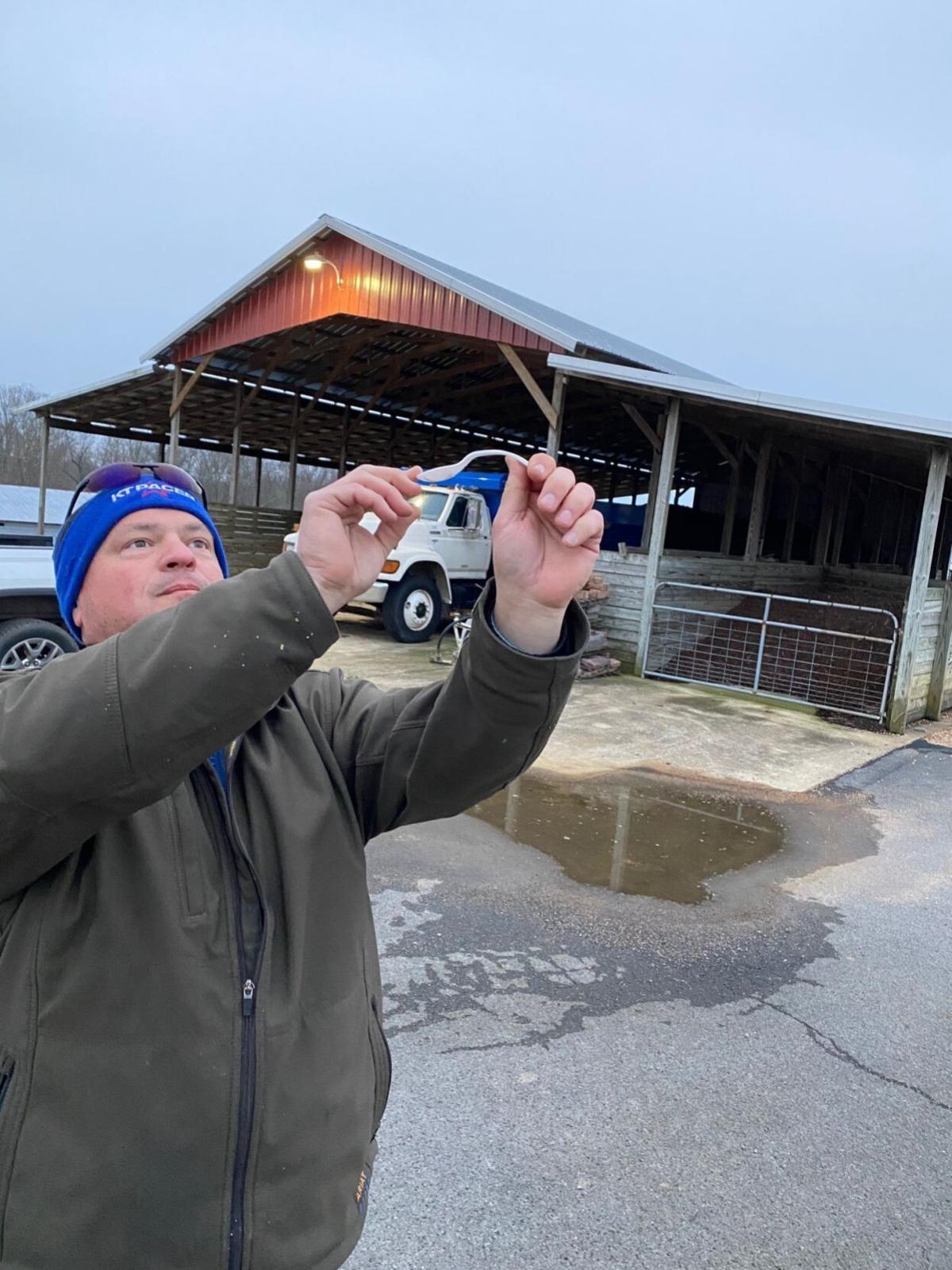 Brad demonstrates how to flip a worm to a purple martin. He whistles first, just to let the bird know he is there. Once he had his attention, he makes the flip. 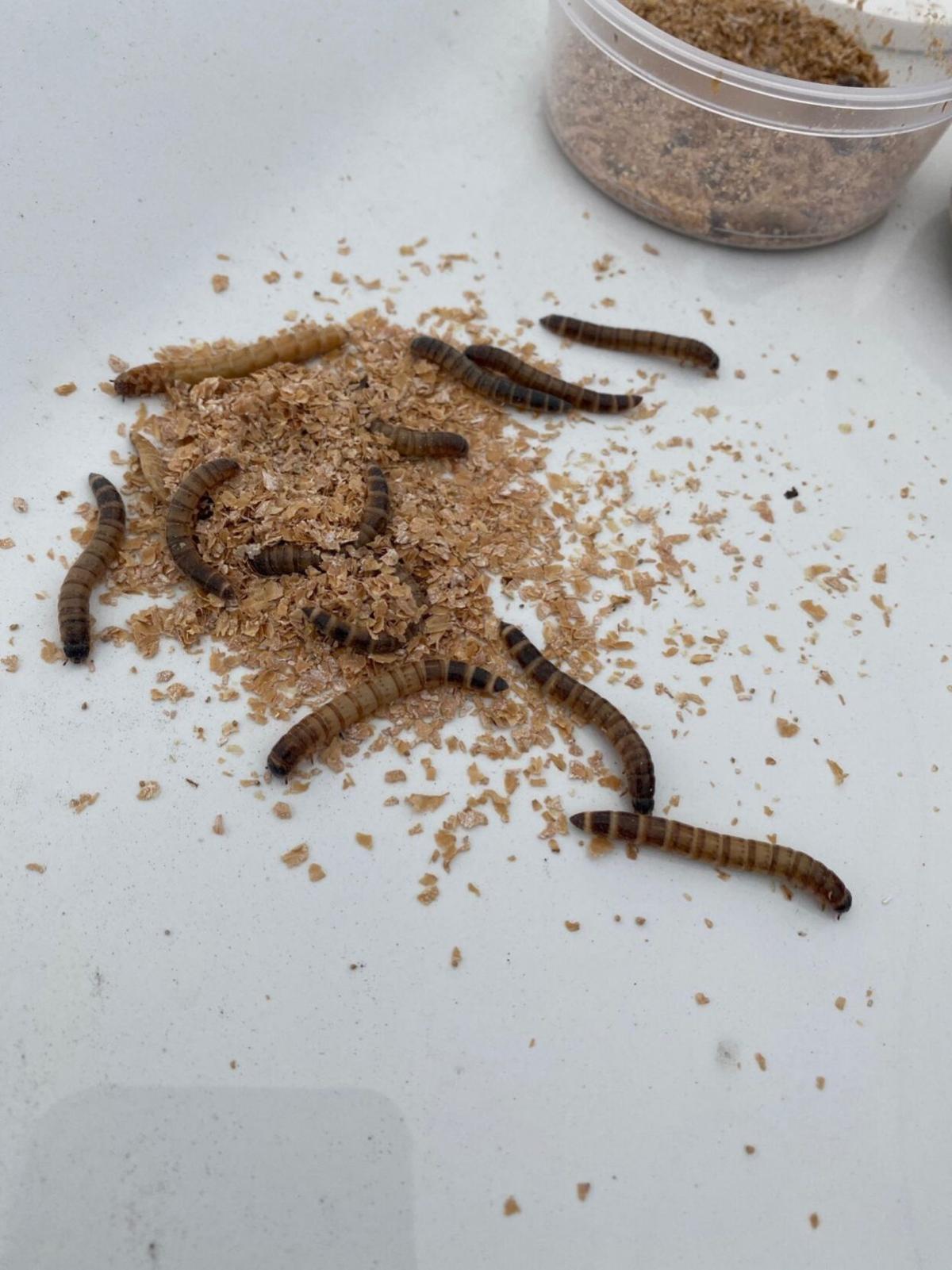 These pet store "super worms" got the little martin through a particularly perilous time during the cold snap.

Brad Biddle loves purple martins and has multiple racks of plastic martin gourds. One early martin arrived before this week's freezing weather and he saved it from the cold weather by flipping crickets and worms to him.

Brad demonstrates how to flip a worm to a purple martin. He whistles first, just to let the bird know he is there. Once he had his attention, he makes the flip.

These pet store "super worms" got the little martin through a particularly perilous time during the cold snap.

An early migrating purple martin showed up at Brad Biddle’s house just days before this week’s cold and snow hit.

Brad was worried about the little guy’s health and well-being in the cold and set about to make sure he had plenty to eat. He flipped crickets to the martin with a plastic spoon. It didn’t take long at all to train the bird to take the crickets.

Brad is happy to report this martin made it just fine through the cold weather, although there were some worrisome moments. Brad has a poultry science degree from Auburn University and worked as a poultry service man for 19 years. He knows birds.

This martin got to looking a little rough at one time during the cold.

So he went to the pet store and bought some “super worms,” kind of a derivative of a meal worm. He started flipping the worms to the martin and the little guy almost immediately turned the corner.

“These worms have more protein and more fat than a cricket,” Brad said.

The ravenous martin ate 27 of them in a row. A normal feeding was 5 or 6 crickets. It's a true sight to behold to see the martin track and snag the flipped worm.

Between the super worms and the box of 1,000 crickets he bought, Brad guesses he has around $100 invested in saving this martin.

“It’s worth every penny,” he said. “Tens of thousands of purple martins died this week in Texas and Louisiana.”

Those states were hammered by the cold even worse than Alabama.

Brad, who lives on his family’s farm in the White Oak community, first got interested in birds as a high school senior in about 1987. His parents Tommy and Neeysa Biddle had told him throughout his school career that he would be going to college. Skipping college simply was not an option.

“My mother made sure I took all the college prep classes,” Brad said. “I got to be a senior and there were no more of those classes to take and I needed a class.”

He’d grown up on a farm and knew a great deal about farming, carpentry and more, but he signed up for ag. Since he hadn’t had it before, he got assigned to freshman ag.

“Here I was a senior in this class with a bunch of freshmen,” Brad said.

“I guess the statute of limitations has run out and I can tell it now,” he said. “I told the other guys it was a piece of cake and not only could I build one, I would make an A on it.”

One student asked Brad if he’d build his birdhouse for him. Soon another did, followed by more. Ever the shrewd businessman, Brad saw an opportunity.

“I told them I’d build them a bluebird house for $5 apiece and I got to keep the house,” Brad said. “I ended up building 8 birdhouses. It was like half a day of work on a Saturday morning.”

Each of the students made an A. Brad came home and put up his new fleet of bluebird houses around the farm.

A passion for birds was born. He still has bluebird houses, but he also keeps up with tree swallows, hummingbirds and, of course, purple martins.

“I like to sit on the porch and watch the purple martins in the afternoons,” he said. “I’m not obsessive compulsive, but I am compulsive.”

And anything he jumps into, he tends to go big. He has 162 plastic purple martin gourds on his place and his parents’ place. The gourds are on special racks that can easily be lowered to the ground for cleaning and maintenance.

An electric fence-type predator guard encircles each pole holding a rack of gourds.

“A snake can get in a rack and just wipe it out,” he said. Snakes don’t get past his electric fence predator guard.

Riding through the country, Brad sees lots of purple martin gourds with no predator guards. He said that simple step can help purple martin landlords maintain their colonies.

Starlings and house sparrows can also wreak havoc on a martin colony.

Brad has an aggressive sparrow trapping program and his plastic gourds all have Starling Resistant Entry Holes or SREHs.

Brad said its critical to have good management practices if you plan to maintain a colony of purple martins.

“Sitting on the porch, listening to them sing and watching their aerobatics is my therapy,” he said.

This is the first time in 10 years he has had to feed a martin to get it through a cold spell. He expects more will soon arrive and he may be feeding more than one.

His first attempt at feeding years ago was an exercise in frustration. He had a difficult time training the birds.

Looking back, he said he was "covey shooting" instead of picking out a single bird. Back then, the got the feeding to click when he started aiming a cricket at a single bird. Once she started feeding, all the birds did.

It took 10 minutes to get this one to eat flipped crickets. If he has to continue feeding and more birds arrive, he plans to train them to eat from a platform.

“I’ve seen videos where people do that and they feed scrambled eggs, which is a whole lot cheaper and more convenient than crickets and super worms,” he said.

He would like to see a local martin conservation organization form. He said good sources of information for people wanting to learn more about purple martins are the Purple Martin Conservation Association and the Facebook page Purple Martin Landlords and Wannabes.