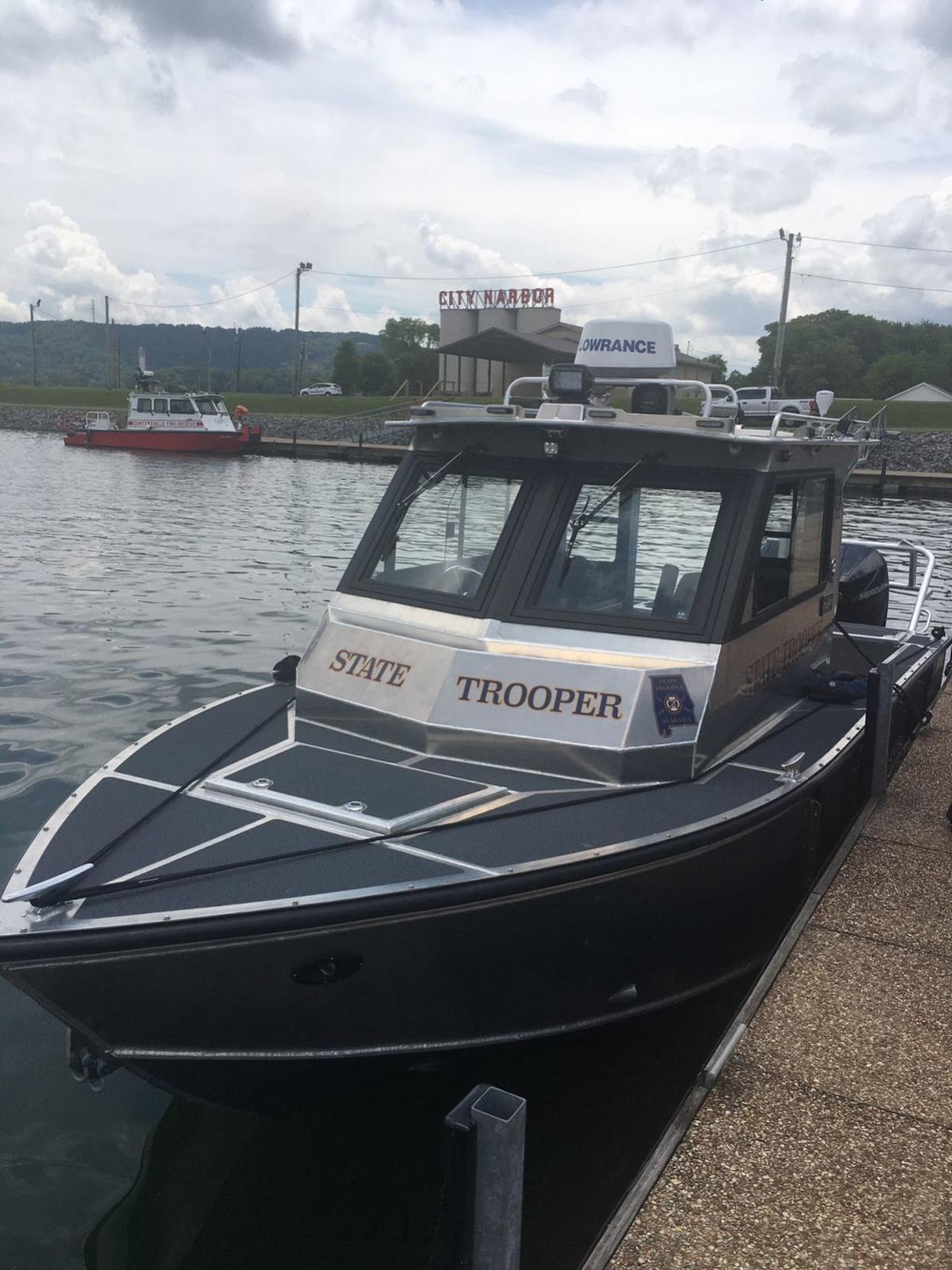 ALEA Marine Patrol paid a visit to the City Harbor this week to emphasize boating safety over the long holiday weekend. 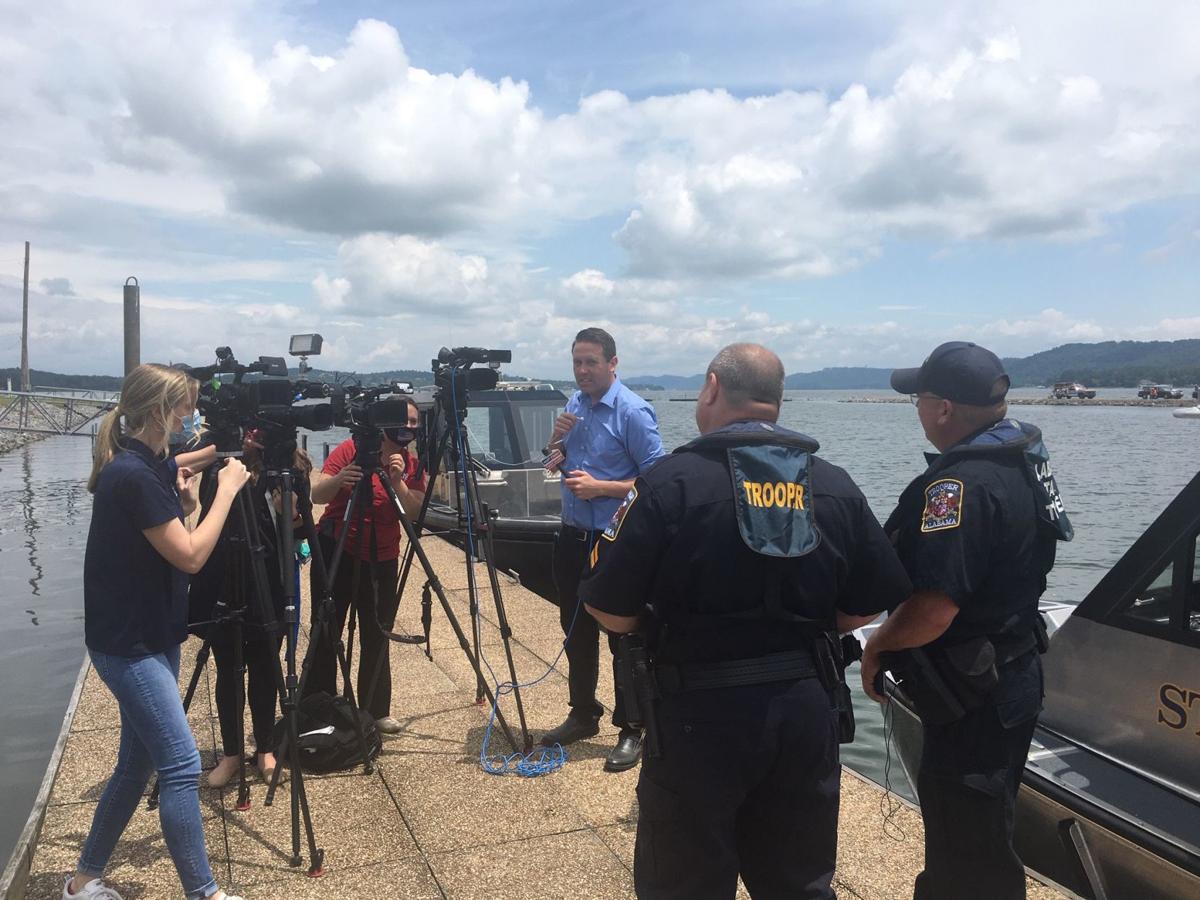 TV reporters out of Huntsville interviewed Marine Patrol troopers at the City Harbor ahead of the holiday weekend.

ALEA Marine Patrol paid a visit to the City Harbor this week to emphasize boating safety over the long holiday weekend.

TV reporters out of Huntsville interviewed Marine Patrol troopers at the City Harbor ahead of the holiday weekend.

ALEA Marine Patrol – the state troopers of the water – will be out on patrol on Guntersville Lake and elsewhere in the state over the long Memorial Day weekend, watching for a host of boating violations.

They held safety briefings for news agencies at a number of places around the state this week to get the word out to be extra cautious on waterways during the holiday. They were at the Guntersville City Harbor Wednesday.

It’s shaping up to be one of the busiest boating seasons in years, maybe ever, not just on Guntersville Lake but statewide. COVID-19 is apparently the reason.

“People have been off work or they want to go on vacation but they can’t, so they’re headed to the water,” said. Cpl. David Mobley.

In Guntersville, boat ramps have been crowded on weekdays and some have been packed out on Saturdays, with no place to park another truck and trailer.

There have already been 2 or 3 accidents on Guntersville, as well as 3 on Weiss Lake, where Cpl. Mobley is based. What’s the main reason behind the accidents?

“Not following the rules of the road,” Mobley said. “Just like a car on the highway, there are rules for how you operate a boat on the water.”

Trooper Eric Watson, who works with Mobley, said not using life jackets is also a contributor to people getting hurt in accidents.

“Seat belts save lives,” he said. “This life jacket is your seatbelt on the water.”

He said life jackets should not be in a locked compartment or stored in a bag. They need to be somewhere you can to them fast if needed.

It’s required that children under 8 wear a life jacket at all times.

“If we come along and you grab an adult-size life jacket and put it on your child, we’ve got a problem,” Trooper Watson said. “You need a life jacket for every person on your boat and it needs to be sized appropriately.”

The Marine Patrol has noticed a new trend this year – kayakers not having life jackets.

“If you’re out in a boat, a kayak or a canoe, you are required to have a life jacket,” Cpl. Mobley said.

“Only the city limits of Guntersville is wet,” he said. “The county is dry.”

For patrol purposes, he said they consider the part of the lake from The Reserve to the powerlines near the State Park as being in the city limits of Guntersville.

While impaired operators, reckless drivers and not enough life jackets are the main things Marine Patrol usually watches for, they’re looking for something new this year. Cpl. Mobley said social distancing should be observed on the water just as it is elsewhere.

“You can be cited for violating the governor’s health order if you don’t follow the recommendation of being 6 feet apart,” Cpl. Mobley said. He was unsure if anyone actually has been cited.

If it’s people in the same family in a pontoon boat, that’s fine. But he said when 15 or 20 people are congregated and it’s clear they’re not family members, such as a gathering of young people, that’s another matter. The troopers will approach such groups and ask them to observe distancing guidelines.

“When we’re out there checking you, we’re not trying to ruin your good time,” Trooper Watson said. “It’s about safety. When we go home, we want you to be able to go home too.”

The Weiss Lake troopers were leaving their interview at the City Harbor to go to Little River Canyon where a drowning had occurred the day before and a search was underway for a body.