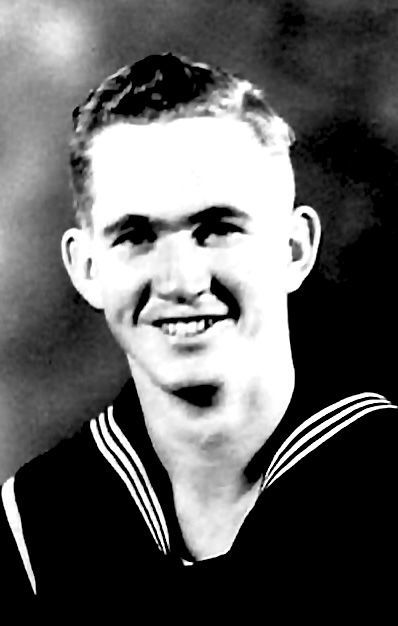 J.C. Buchanan in his Navy photo 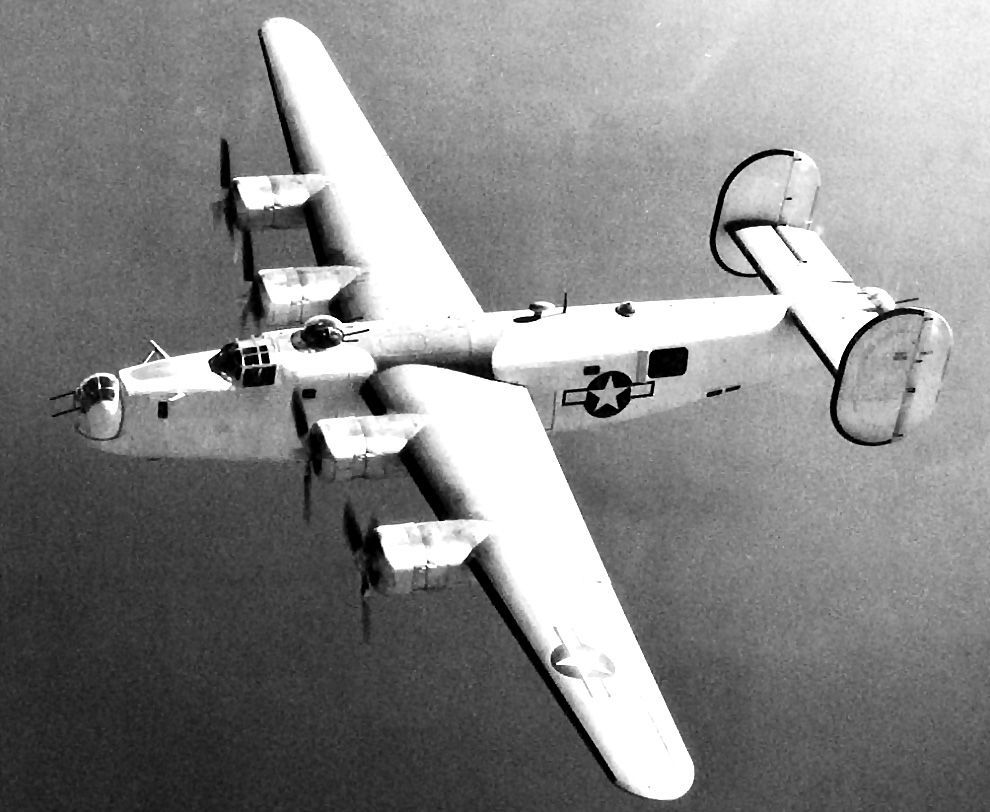 J.C. Buchanan was assigned to a PB4Y-1 heavy bomber, the Navy's version of the Army Air Corps' B-24 Liberator. 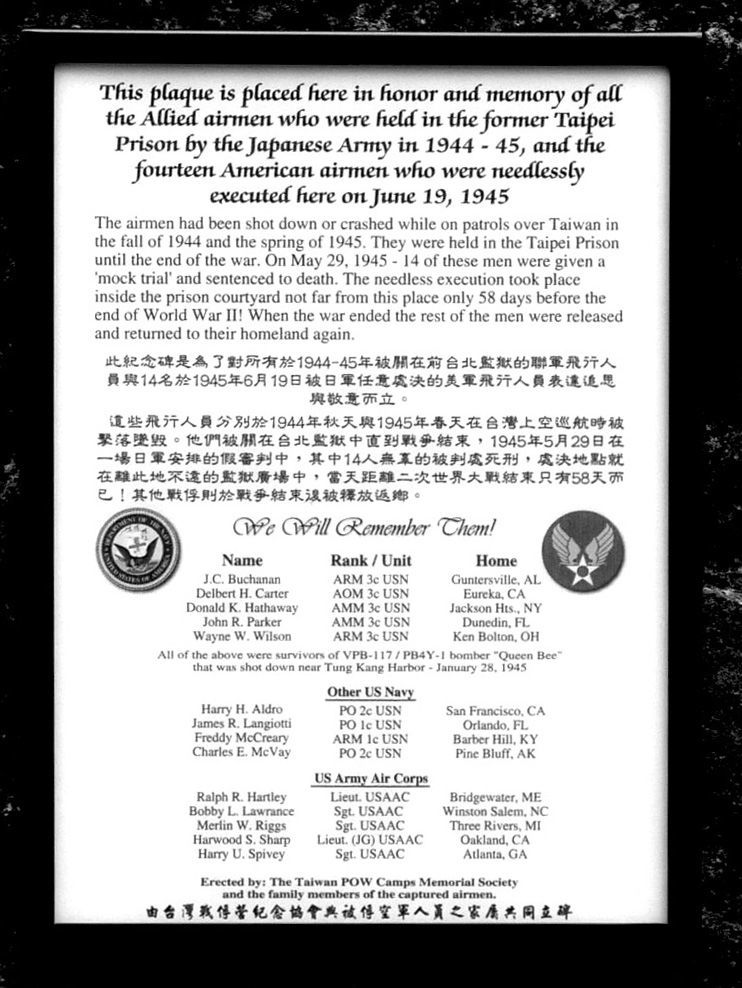 This memorial at the former Taihoku Prison lists the names of U.S. prisoners of war who were given a sham trial, then executed by the Japanese in the closing days of World War II. The name of J.C. Buchanan of Guntersville is the first one listed.

J.C. Buchanan in his Navy photo

J.C. Buchanan was assigned to a PB4Y-1 heavy bomber, the Navy's version of the Army Air Corps' B-24 Liberator.

This memorial at the former Taihoku Prison lists the names of U.S. prisoners of war who were given a sham trial, then executed by the Japanese in the closing days of World War II. The name of J.C. Buchanan of Guntersville is the first one listed.

In most, if not all, Marshall County cemeteries you will find the graves and memorials for members of the Greatest Generation who defended our nation during World War II. This year as we observe the 75th anniversary of the end of that global conflict, we look back to those final days and remember those who were lost.

The Germans surrendered to the Allies on 8 May 1945. People throughout America celebrated by erecting flags and banners, while the British engaged in massive street parties in London and other English cities. Later, on 2 September 1945 in Tokyo Bay, Japanese officials agreed to terms of unconditional surrender onboard the USS Missouri. For history’s sake, let’s go back to January 1945 and examine an event that took place in the Pacific Theatre at the beginning of the last year of the war.

J.C. Buchanan was born in and raised in Guntersville. He was the son of Oliver and Delia Buchanan, and the husband of Vivian Bowen. J.C. joined the Navy and in 1945 was an Aviation Machinist's Mate Third Class (AMM3c) assigned to a Navy bomber in the Pacific.

Buchanan’s last mission occurred on 28 January 1945 when his bomber took off from Jinamoc Seaplane Base in San Pedro Bay, Philippines. He was one of two mechanics assigned to an eleven-man crew of a PB4Y-1 Liberator patrol bomber. A PB4Y-1 was the Navy designation of the heavy bomber aircraft B-24 Liberator used by the Army Air Corps. The pilot was 28-year-old Lt. Robert E. White from Union City, Tennessee.

Their mission that day in January was to patrol along the Formosa (modern day Taiwan) and China coasts while looking for targets of opportunity. The aircraft made two bombing runs over Formosa, sinking two Japanese ships. On the second bombing run, the Liberator was taken down by anti-aircraft fire.

The bomber descended fast with nowhere for Lt. White to set it down except in the water. It was reported by a survivor that White survived the crash and was seen surfacing from beneath the water but later could not be found. The young lieutenant died in the crash along with three other crew members. The co-pilot, Ensign John Bertrang, and five crew members including Buchanan survived the crash, and were taken by the Japanese as prisoners-of-war. A few days later, one of the surviving crew members died in captivity from his injuries.

Ensign Bertrang, was sent by his captors to Tokyo for medical treatment and interrogation. The remaining crew were placed in Taihoku (modern day Taipei) Prison on Formosa with eight other captured Army and Navy fliers on Japanese-held Taiwan.

The Japanese eventually placed Buchanan and the other American POWs on trial, charged with indiscriminate bombing. This generally meant their actions destroyed non-military targets and killed civilians. They were found guilty and sentenced to death by firing squad.

On 2 June 1945, the American fliers were marched to an area inside an outer wall of the prison and executed by a firing squad. No one back home, including military authorities, knew of this war crime until after the end of the war.

Over 400 miles away north of Formosa is the Chinese city of Shanghai, just across the East China Sea from Japan. The Japanese invaded Shanghai in 1937, years before their attack on Pearl Harbor. After the war’s end in October 1945, Lt. Colonel Michael J. Charignon led an Offices of Strategic Services (OSS – predecessor to the CIA) rescue team into the city of Shanghai. Operating on information from a captured Japanese soldier, his team searched a funeral parlor and discovered a row of 14 plain wooden boxes. Small white tags with writing in English and Japanese were attached to each one. Inside the boxes, they found urns containing the ashes of each of the executed Americans and records of their execution. Charignon and his OSS team held onto the boxes pending burial instructions from headquarters.

Military authorities in Washington notified the Americans’ next-of-kin including Buchanan’s family. The ashes of Buchanan and the other American fliers eventually were returned to their families in the states. Buchanan’s family buried his remains in High Point Baptist Church cemetery near Albertville.

In July 1946, eight Japanese soldiers responsible for the execution of Buchanan and the other fliers at Taihoku Prison were tried before an American Military Commission. All were found guilty. Two were sentenced to death. Two were given life imprisonment while four others received prison terms ranging from 20 to 40 years.

After U.S. forces captured the Japanese mainland, another extraordinary discovery was made. Written Japanese orders were found in Tokyo that directed military subordinates to kill Allied prisoners-of-war at the slightest affront to their authority.

Each side in World War II took prisoners. Allied prisoners-of-war fared much better in the German and Italian camps in Europe than those interred by the Japanese in the far east. The death rate of prisoners held by European belligerents was 4 percent compared to that of 27 percent of those held by the Japanese.

What was the reason for the staggeringly high death rate for Japanese-held POWs? One possible reason was the apparent belief that it was a dishonor to surrender to an enemy. This explains why many WWII Japanese military personnel committed hari-kari, the self-disembowelment on a sword, rather than be captured. It was better to die by your own hand than admit one’s self to the shame of capture.

During this time of social distancing due to COVID-19, and since cemeteries are usually not very crowded, you can personally pay tribute to Buchanan’s memory by visiting his grave and the graves of other soldiers, sailors, airmen, and marines who paid the ultimate sacrifice for our nation.

Their sacrifices are not in vain if we remember.