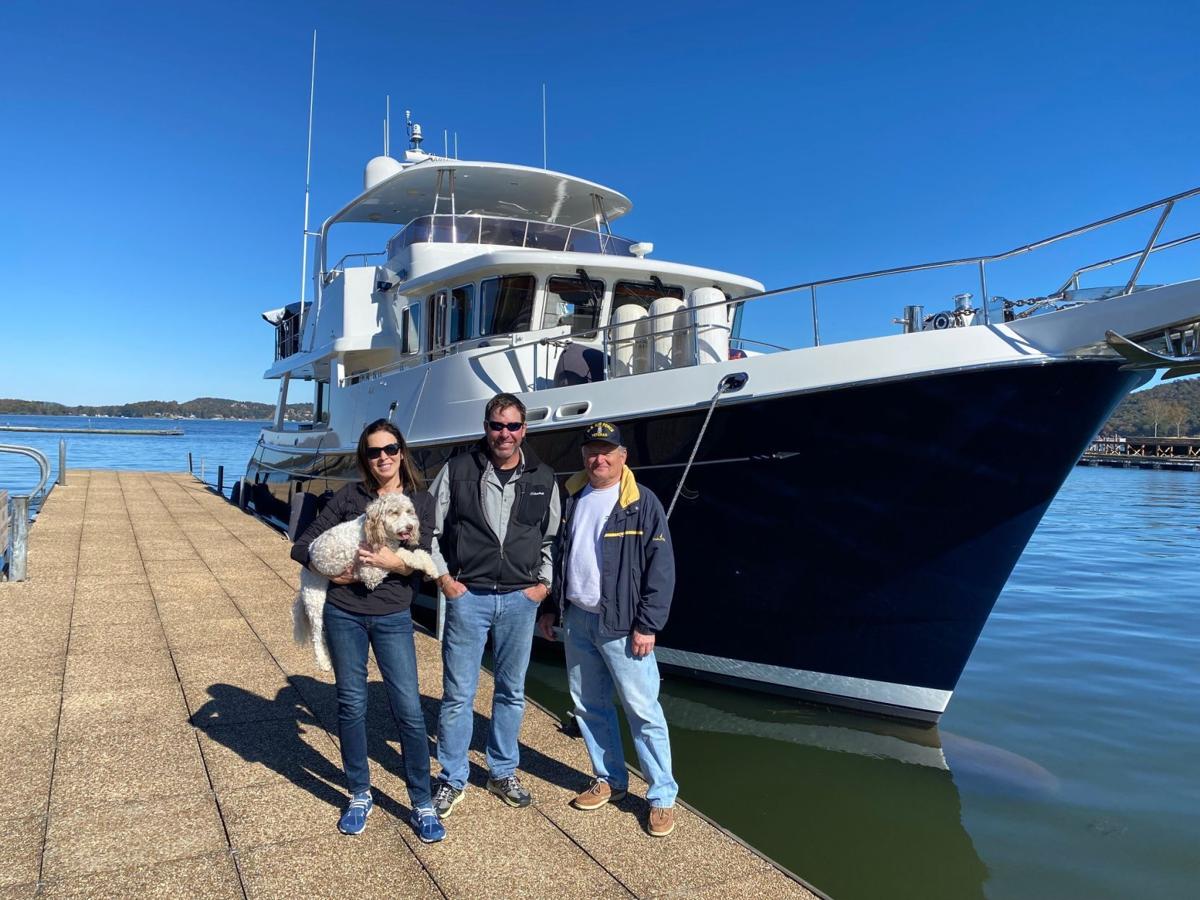 Duane Sammons (right) previously owned the 60-foot trawler pictures. When new owners Ken and Nancy Finnegan were back through Guntersville, they stopped to visit with Duane. Their pup is Roxy. 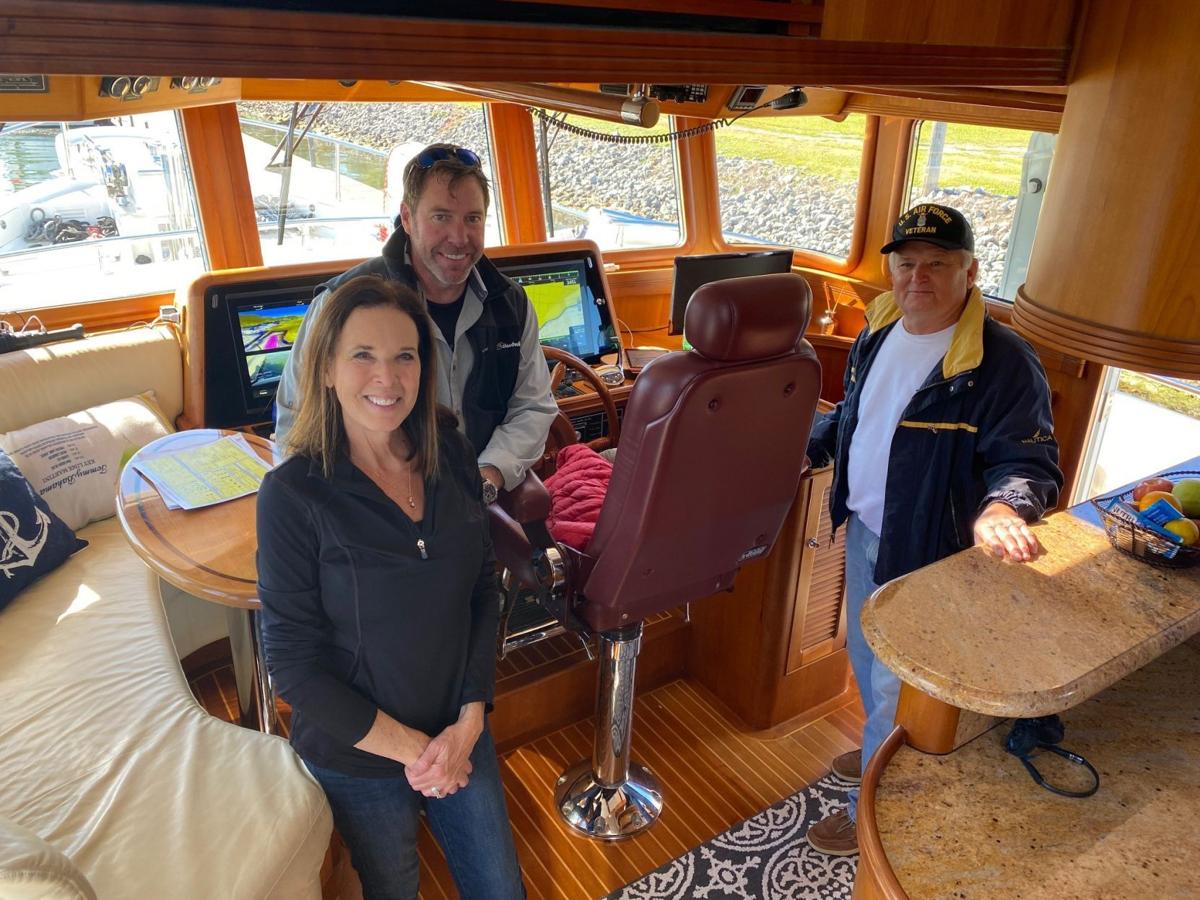 The Finnegans and Duane are shown in the boat's cockpit. 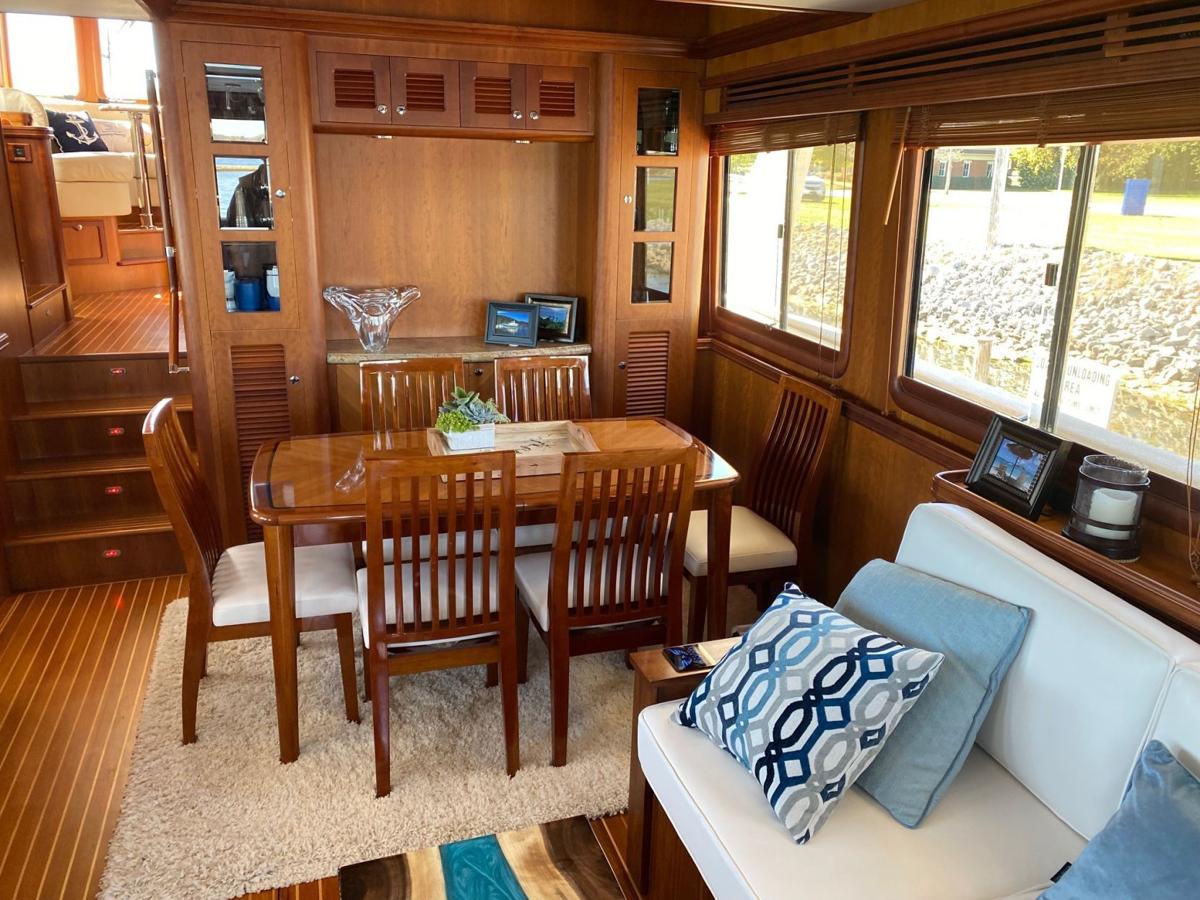 There's wood throughout the interior of the boat. This is a view of the dining area. 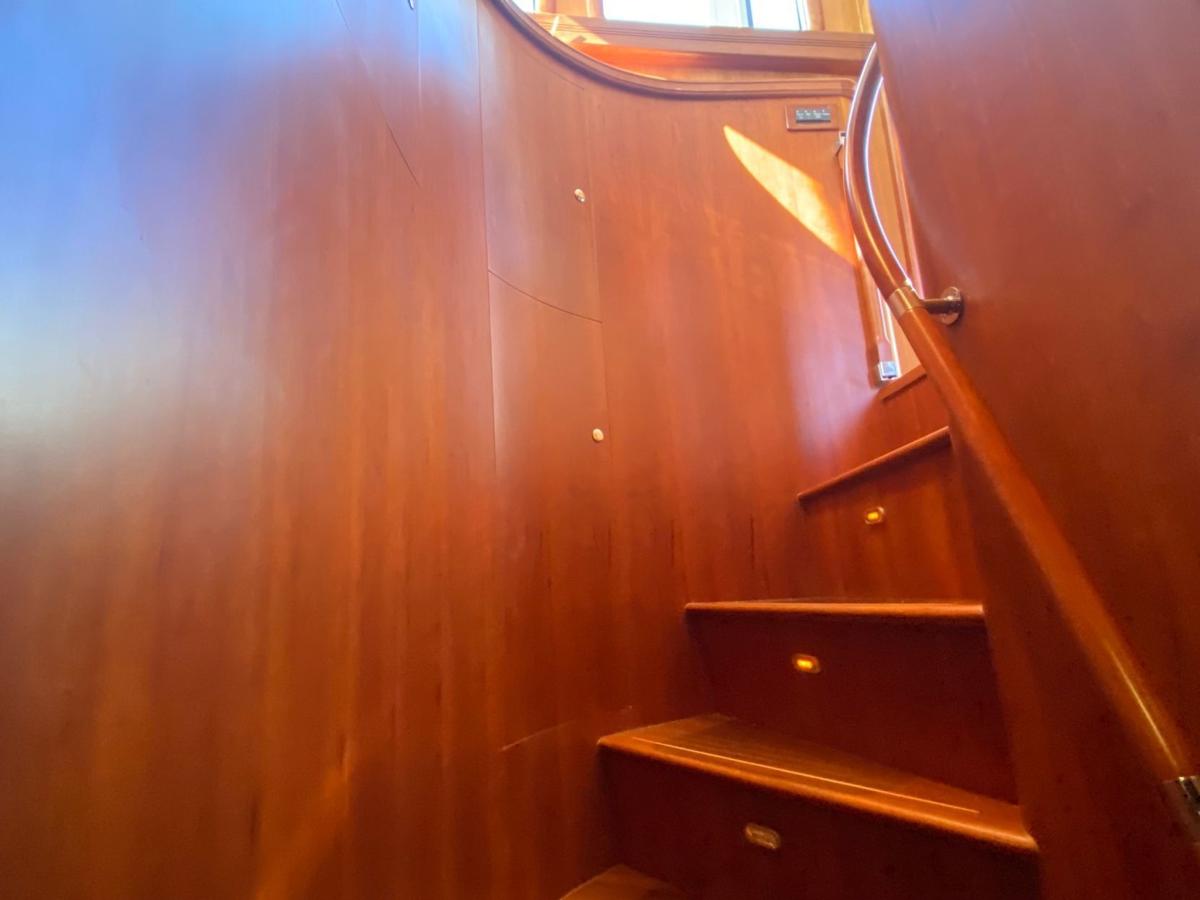 There's built-in storage along the staircase. 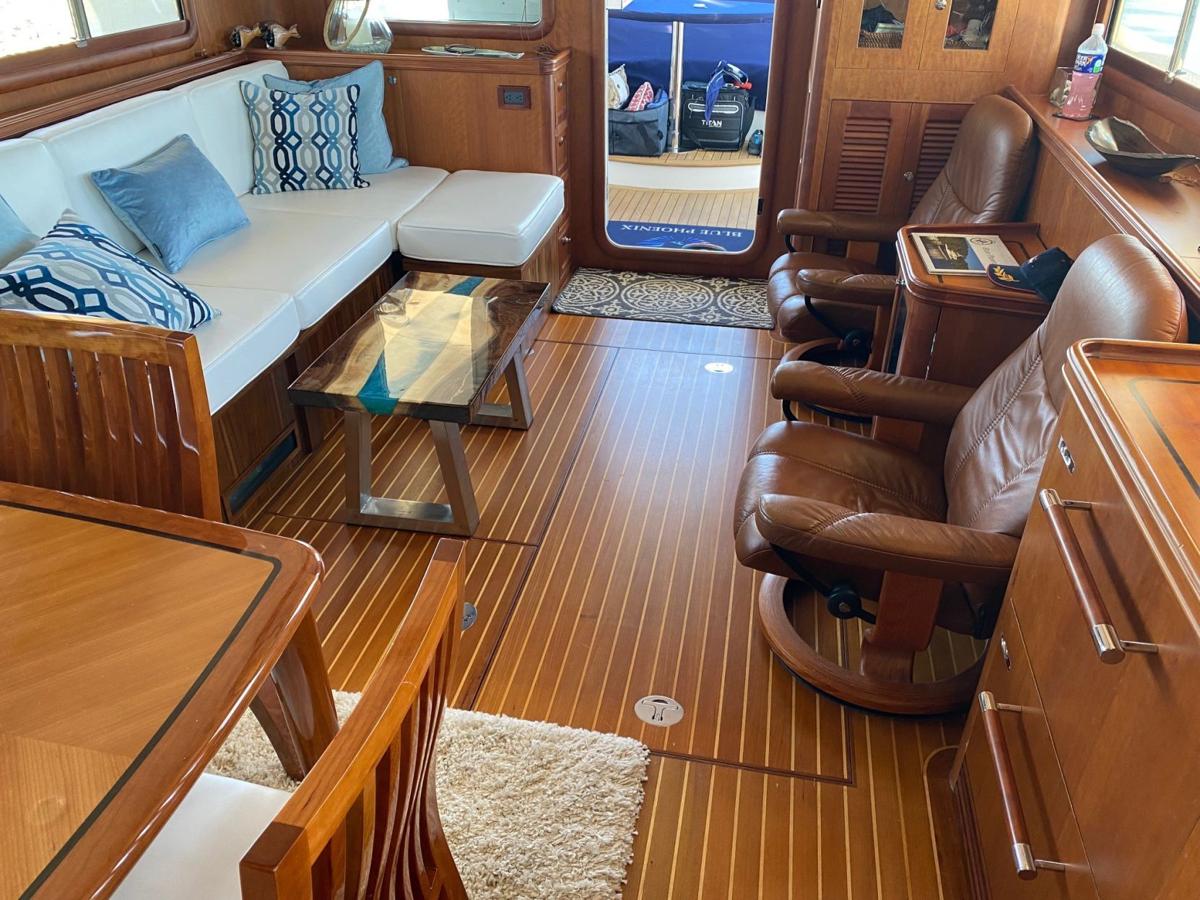 This is the living room of the vessel.

Duane Sammons (right) previously owned the 60-foot trawler pictures. When new owners Ken and Nancy Finnegan were back through Guntersville, they stopped to visit with Duane. Their pup is Roxy.

The Finnegans and Duane are shown in the boat's cockpit.

There's wood throughout the interior of the boat. This is a view of the dining area.

There's built-in storage along the staircase.

This is the living room of the vessel.

When Duane Sammons sold the Anchorage Marina in Claysville several years ago, he and Janet Phillips – the 22-year manager of the Guntersville Burger-King – had a yacht built in Asia.

Duane and Janet dreamed of sailing the world in it and they did get to do quite a bit of traveling in it, primarily up and down the Eastern seaboard.

But their dreams were cut somewhat short. Janet developed a rare brain disorder. Her illness meant they needed to stay close to the U.S.

Still, they had a grand time on the boat and later she checked items off her bucket list like visiting the Grand Canyon.

Janet passed a year ago.

For awhile, their boat called Cadence sat unused at Guntersville Marina. The inside remained pristine. A ship like this is sealed. But the outside got the dirt, mold and gunk that any boat left outdoors gets over time.

“It sat down there 3 years and I did nothing with it,” Duane said.

The thought of selling it crossed Duane’s mind.

“The first time I saw it, I said, ‘No way,’” Nancy said. As we mentioned, the exterior was dirty and that part of the boat was not appealing.

The Finnegans looked, but the timing wasn’t right for Duane.

Eventually, he decided it was time to move on from the boat. It was almost as though the Finnegans coming to own the boat was meant to be.

“He called me the night before I was supposed to go to Key West to look at a boat and said, ‘Hey, Ken, did you ever buy a boat?’” Ken said.

Soon, a deal was reached and the Finnegans became the new owners. For six weeks or so, they came to Guntersville every weekend and worked on the boat. Finally, they took it home to Knoxville. There, the exterior was repainted.

Now, the boat looks brand new inside and out.

The Finnegans were back in Guntersville last week, headed out for an 8-month cruise. They stopped at the City Harbor. There to greet them was Duane. They’re all like old friends now.

“This boat was built to cruise around the world,” Duane said. “Ken and Nancy are going to get to use it like Janet and I wanted to.”

The Finnegans are finding they are enjoyed life aboard the boat.

They will go down to the coast, south to Key West and then the Bahamas before heading north next year for New England.

They have renamed the boat “Blue Phoenix,” since it has risen again.

The boat has wood everywhere, along with built-in storage in every nook and cranny. It has the latest electronics to guide a journey.

There’s a washer and dryer, a TV and all the conveniences of home.

The ship holds 2,000 gallons of diesel fuel so she can go a long way between fill-ups. It gets about 2 miles to the gallon.

Duane was all smiles to see his old boat again. He and Ken swapped stories and Duane shared tips with him.

‘It’s not that a boat like this is that much fun to operate,” Duane said. “The party starts when you get where you’re going.”