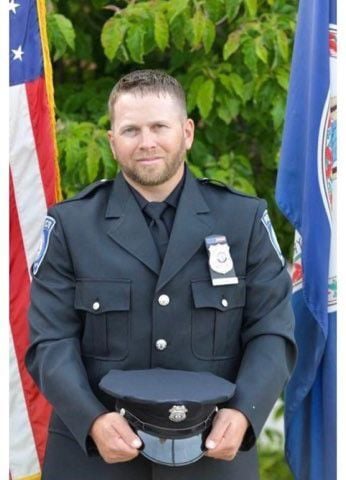 When he's not hunting, fishing or building fences, Joey serves as a police officer. 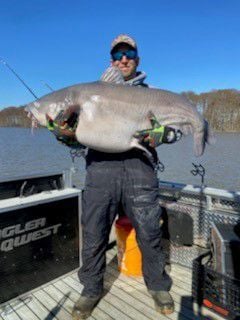 Joey Baird holds the record for the largest blue cat ever caught in North Carolina. He caught this 86-pounder just a couple weeks ago. 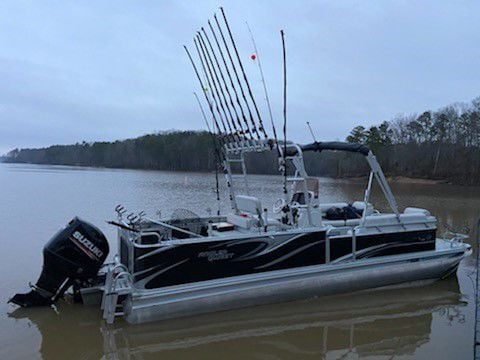 Joey Baird fishes out of this specialized pontoon boat set up just for catfishing.

When he's not hunting, fishing or building fences, Joey serves as a police officer.

Joey Baird holds the record for the largest blue cat ever caught in North Carolina. He caught this 86-pounder just a couple weeks ago.

Joey Baird fishes out of this specialized pontoon boat set up just for catfishing.

The Catmaster Classic catfishing tournament is coming to Decatur next week, but don’t be surprised if you hear of some of the tournament’s big cats being caught on Guntersville Lake or just below Guntersville Dam as well. The tournament waters are Guntersville, Wheeler and Wilson.

The tournament is expected to draw 200 boats with a top payout of $50,000 for first place.

One of those boats will have 2 record holders aboard. Joey Baird caught the state record blue catfish in North Carolina last July 5. It weighted 121 pounds and 9 ounces. His partner Dale Lowe caught a 141 pounder on the Virginia side of Kerr Lake that was just a pound off being the world record.

They’re hoping for big things in the Classic, even though the Tennessee River will be brand new water for them. Joey is coming down this weekend to begin pre-fishing. The tournament format is for 5 fish a day to be weighed.

Joey is a police officer, a volunteer firefighter and owns his own fencing company, so he’s a busy guy. He still finds time for fishing and he is about to start a second business offering sunset cruises and fishing trips.

Lake Gaston, where he caught the monster cat, is his home water. He fishes out of an Angler Qwest 824, a pontoon boat specifically rigged for fishing. It’s powered by a Suzuki 200 engine.

“It was July 5, towards the tail end of our spawn, when I caught the fish,” Joey said “The biologist said if I had caught it before the spawn, it could have been a potential world record.”

Joey was fishing cut bait in about 25 feet of water on the edge where the river channel came up on a flat. He marked the fish with his Lowrance electronics before trying for it.

“I fish just like I hunt,” said Joey, who is also an avid bowhunter. “I’m very patient.”

The big fish was the very first fish of the night.

“It didn’t take as long to get it in as you might think,” Joey said. “It took maybe 10 or 15 minutes. I believe this fish had been hooked before. It was smart. It would swing side-to-side and then it came straight at the boat.”

The big cat got wrapped in both anchor lines. Joey had to pull up the anchor lines and unwrap the fishing line with his hands. The fish came up while he was doing that.

He was fishing with a Big Cat Fever Rod, which was a bonus.

“The Catch the Fever program will pay you $10,000 if you catch a new state record on their rod,” Joey said. But the fish has to be weighed on certified scales and witnessed. It was caught on a Sunday night and it was several hours until they could get it weighed and certified.

“The amount is actually $15,000 if you are wearing some of their apparel, but I didn’t have any on that night,” Joey said.

He kept the fish alive and got it certified and claimed the $10,000 bonus.

He then donated the $10,000 winnings to his volunteer fire department.

About 2-1/2 years ago, Joey was on duty when Hurricane Michael had come through the area. A female motorist, Brenda Child, had tried to drive across a road inundated by the floodwaters on the Meherrin River. Her car was swept away.

Joey was one of the police officers who responded to the call.

“The current had her door pinned closed,” he said. “She had about 6 inches of air to breath.”

He leapt into the raging river and swam to the car. He doesn’t recommend others do that. But he knew his swimming ability and knew he could make it.

“I knew I wasn’t coming back until a boat could get to us,” he said. “But I needed to get her out of the car and onto the roof.”

The current pinned him against the car as well.

“Quite a few other firefighters and deputies arrived and I told them not to put anyone else in the water,” Joey said. “I didn’t want anyone else to be trapped.”

There was no rescue boat in the local area. The closest boat belonged to a conservation officer who was 2 counties away.

“Meanwhile, all these guys from multiple agencies were there and at this point all they could do was watch from the roadway,” Joey said. “One of the boys put his personal pontoon boat in the water.”

The would-be rescuer got to them, but the current was so swift his boat was pinned against a tree.

“He blew the motor up and he was pinned with us,” Joey said. “But it gave us the opportunity to get her out of the car and onto the platform of the boat until the conservation officer could get there.”

Joey donated his record fish winnings to the Gasburg, Virginia, Fire Department to go towards the purchase of a rescue boat.

“I wasn’t surprised when he told me what he did but it really meant a lot to know that somebody else would not be left in this situation that I was left in,” Child said.

After the harrowing incident, Joey took a year off from law enforcement to grow his business and spend more time with his family.

“You miss a lot when you are working as a firefighter or in law enforcement,” he said.

It made him realize how blessed he is.

“My wife is a nurse and we have both been able to work through the pandemic,” he said. “We’ve seen how hard times have been for some people. I almost died that day on the river and it has given me a whole new perspective on wealth and money. I’m richer than anyone around because I have my family, my wife and my kids.”

He’s back in law enforcement now and volunteering as a paramedic and firefighter. And next week, he will have the opportunity to fish for $50,000.

He will be in the area this weekend, doing a lot of riding and pinpointing areas he wants to fish. He has already done quite a bit of map study.

“I’m not going to give away too many of my secrets, but I like old creekbeds and structure close to flats,” he said. “Water temperature is a big thing for me and will decide a lot.”

He has fished 4 tournaments in his life. He finished 3rd in two large ones last year shortly after landing his state record fish.

“I want to start fishing bigger tournaments like the Classic,” he said.

He caught an 86-pounder two weeks ago. It has really been quite a year for him. He killed a large buck with his muzzleloader with his 5-year-old son with him last fall. And he got his first ever bear with a bow.

He and his brother have a YouTube channel Bait & Wait Outdoors where you can catch many of their outdoor adventures, especially deer hunting and turkey hunting.