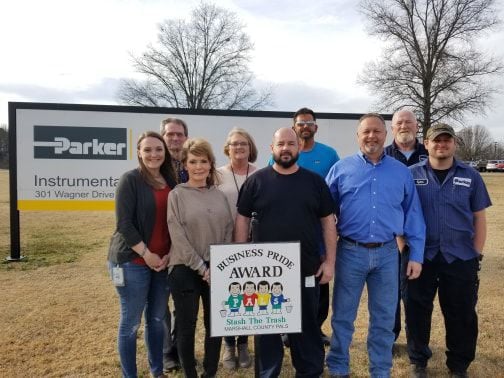 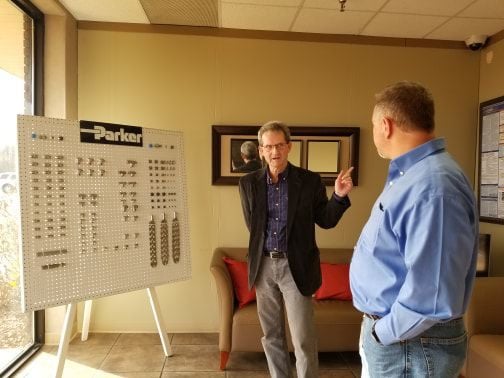 MCPALS President Micky Hunt and Parker Hannifin Operations Manager Shane Dobbins look over the connection and flow products the company makes that are on display in the lobby. The company is the global leader in motion and control technologies.

MCPALS President Micky Hunt and Parker Hannifin Operations Manager Shane Dobbins look over the connection and flow products the company makes that are on display in the lobby. The company is the global leader in motion and control technologies.

It takes a lot of pride to keep a 52-acre production company's grounds litter free but Parker Hannifin in Boaz has what it takes, according to Marshall County's People Against A Littered State. (PALS)

Marshall County PALS President Micky Hunt said this award is only given out twice a year.

“They have done a great job in keeping their place clean and we appreciate all their hard work in doing so,” he said.

Shane Dobbins, Operations Manager for Parker Hannifin, said he is proud that his company has been noticed for the work they have put in.

“We've really done a lot,” he said. “We trimmed the privet hedges, cleaned our pond.”

Dobbins said he is proud of his employees and this award is really all for them and their hard work.

“This is a reflection of our employees,” he continued. “Our employees are proud to work here. We're a family.”

Cecilia Pullen, Executive Director of MCPALS, said litter is a problem we all face but that we all can take action against.

“Alabama spent around $8 million picking up litter,” Pullen said. “That money could certainly be spent in other places. People have to have respect for themselves and for our county and not throw trash out.”

For anyone interested in becoming a member of the MCPALS, their next annual meeting will be held Jan 17 at 11:30 a.m. at Papa Dubi's in Guntersville.