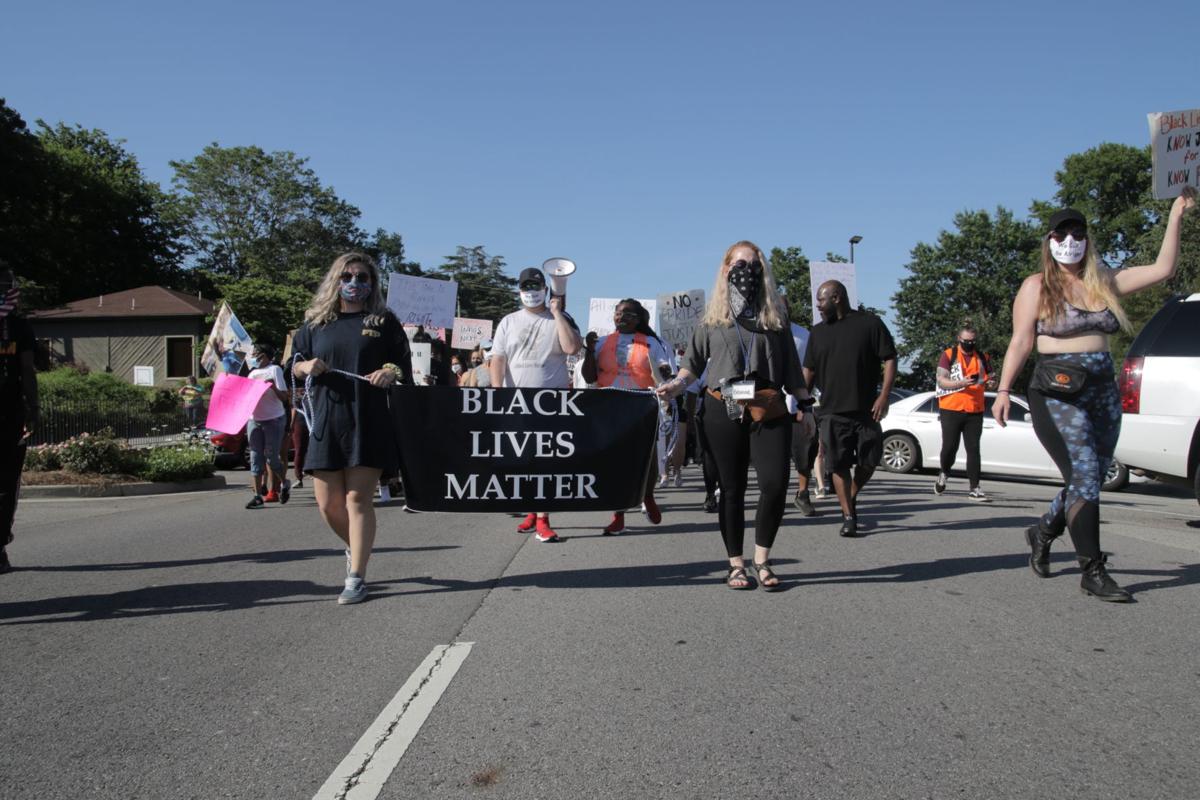 The Unity March heads down Gunter Avenue with a "Black Lives Matter" sign leading the way. 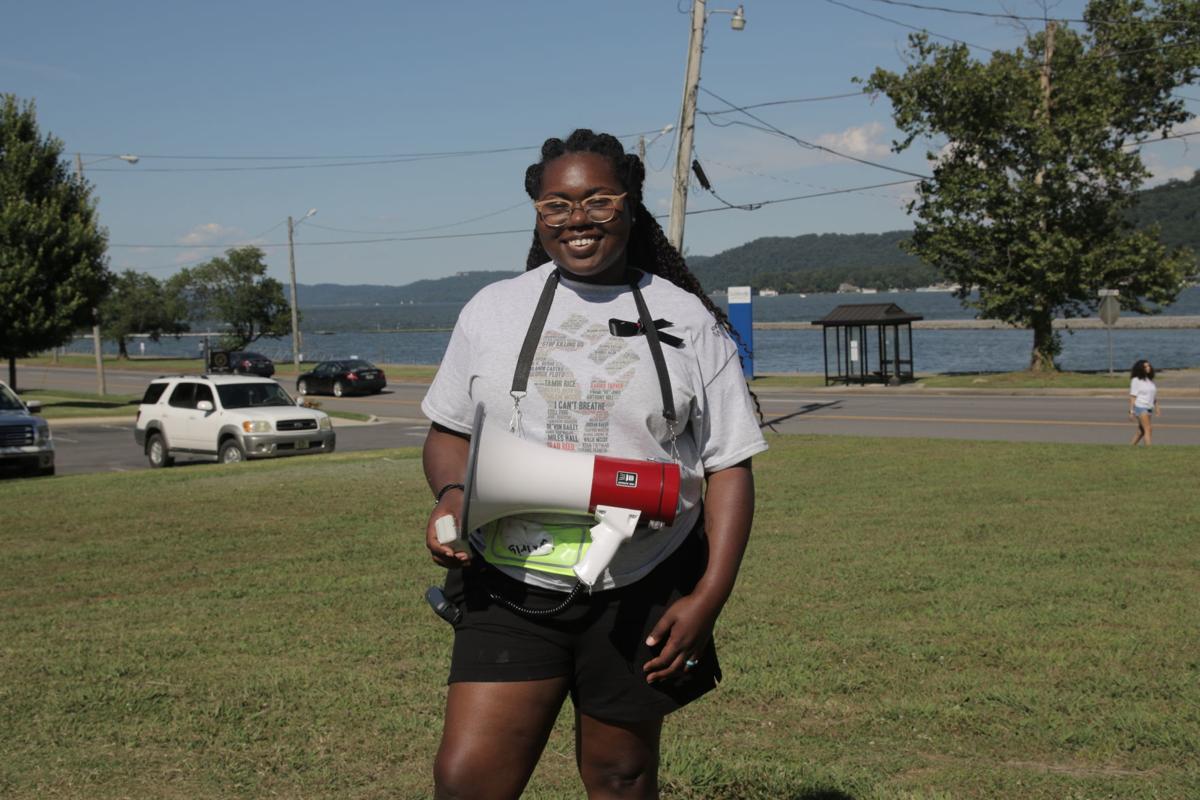 March organizer Unique Morgan Dunston led the activities. She grew up in nearby Albertville. 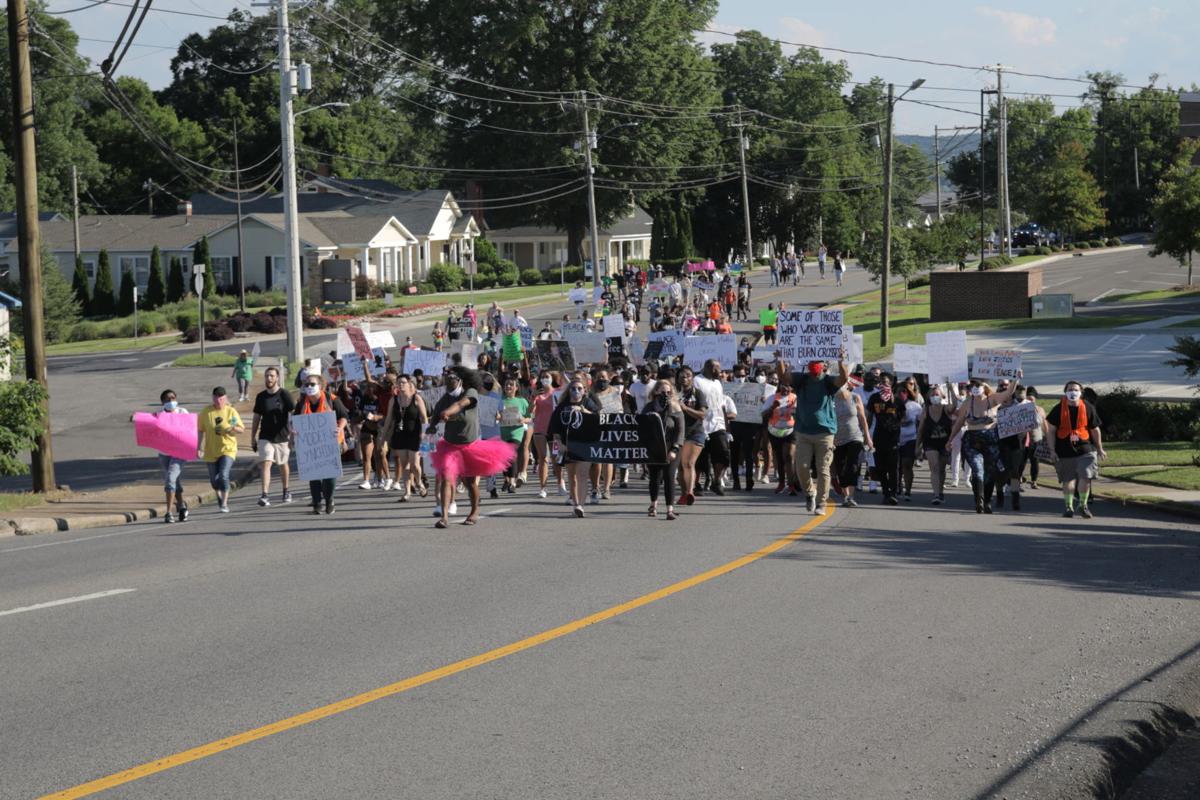 The march heads along Blount Avenue. 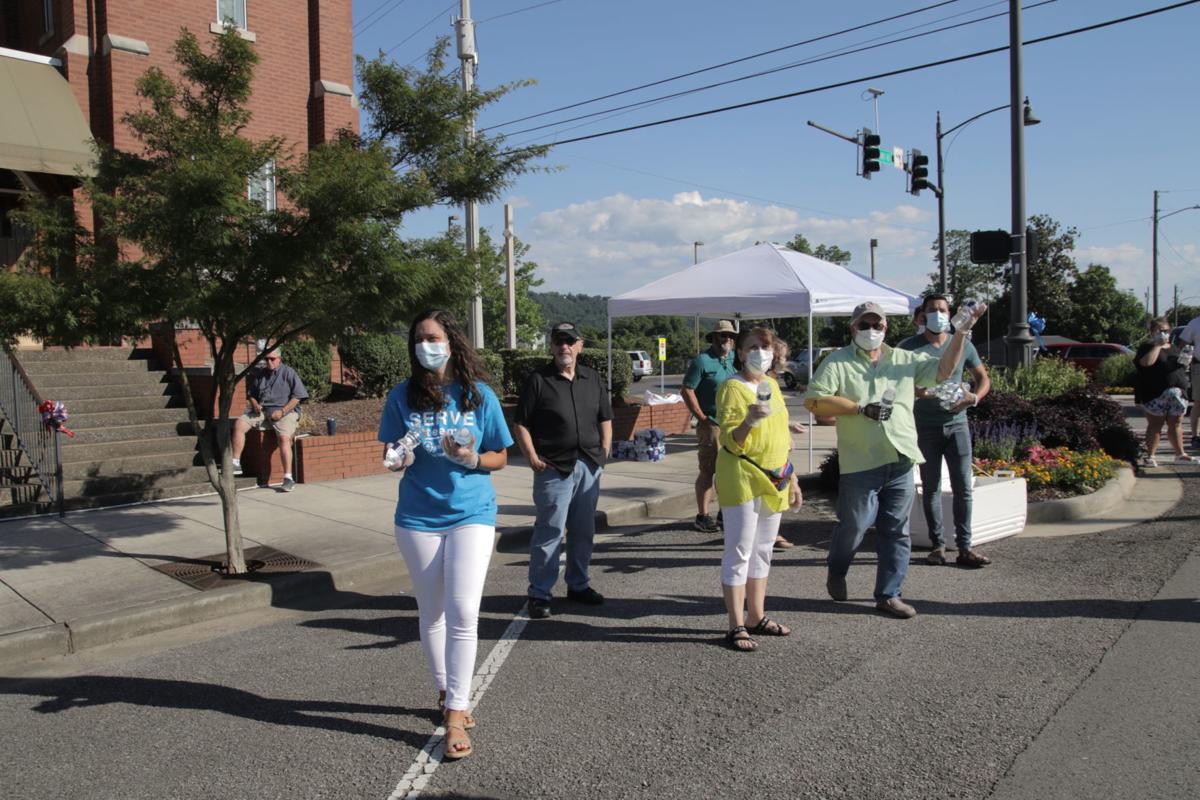 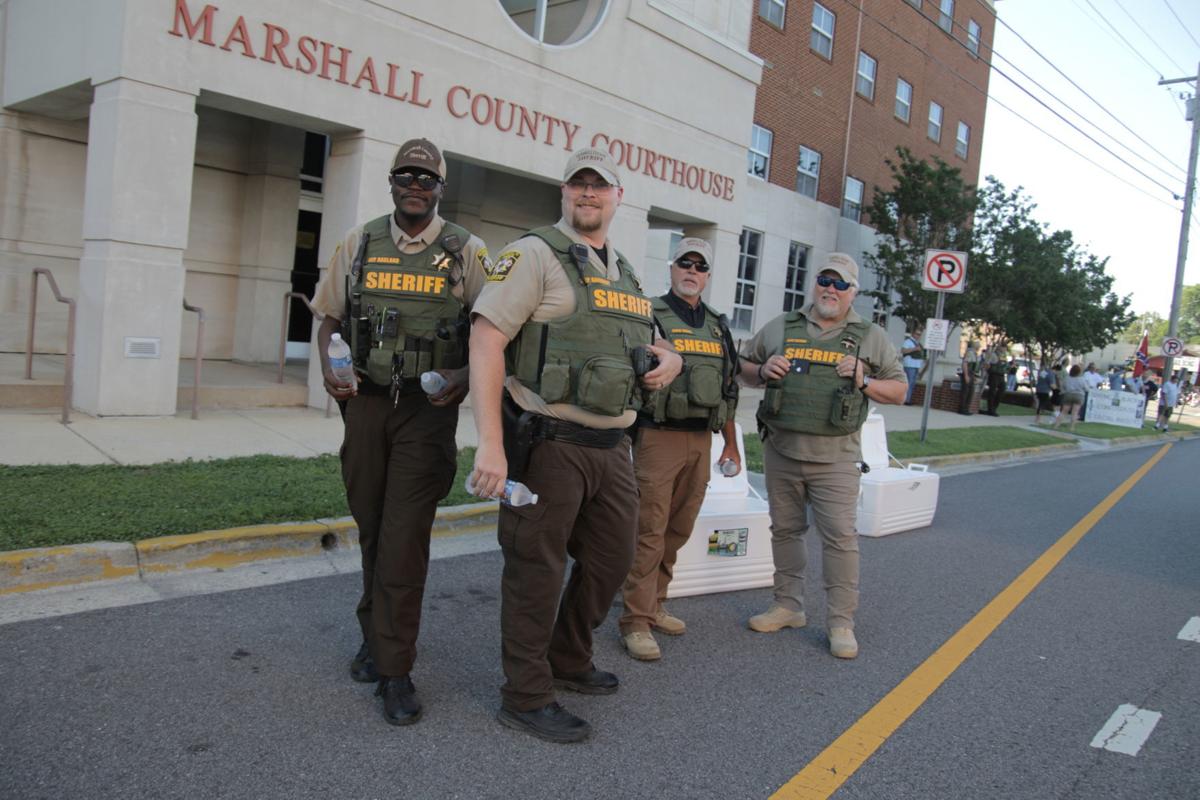 Sheriff's office personnel wait with waters for the marchers. 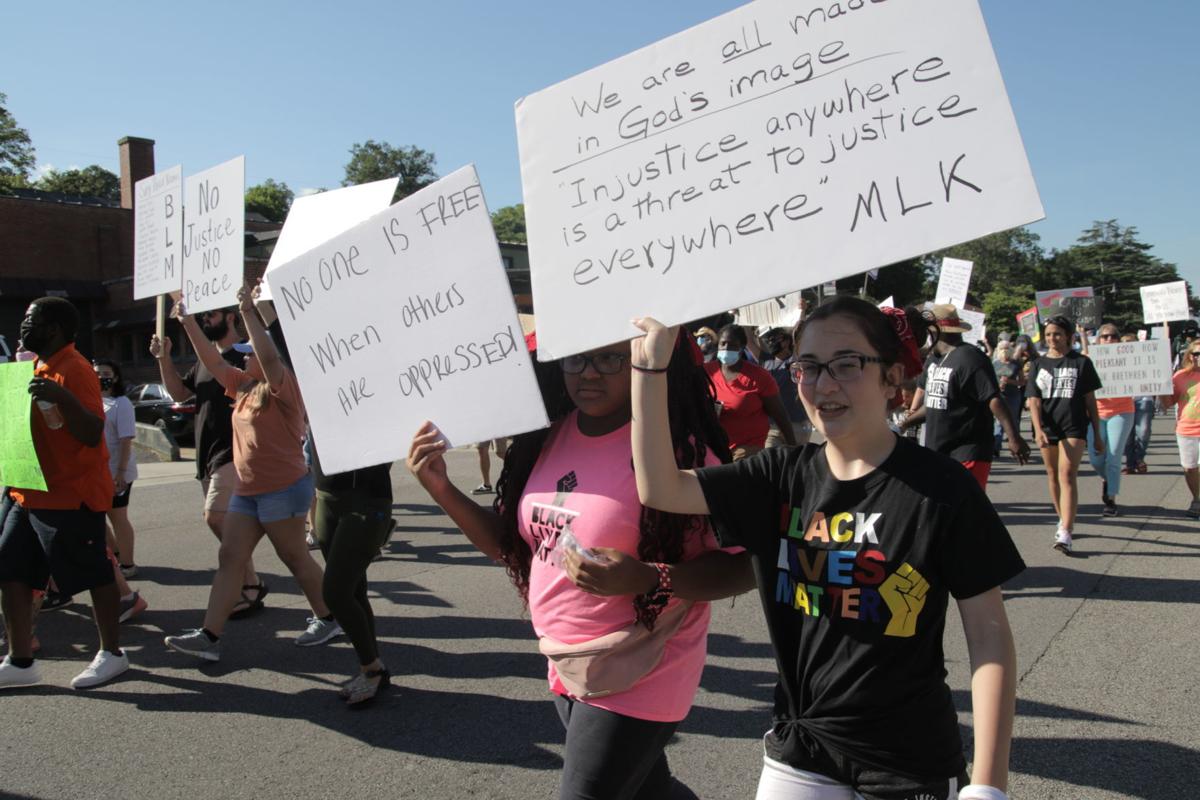 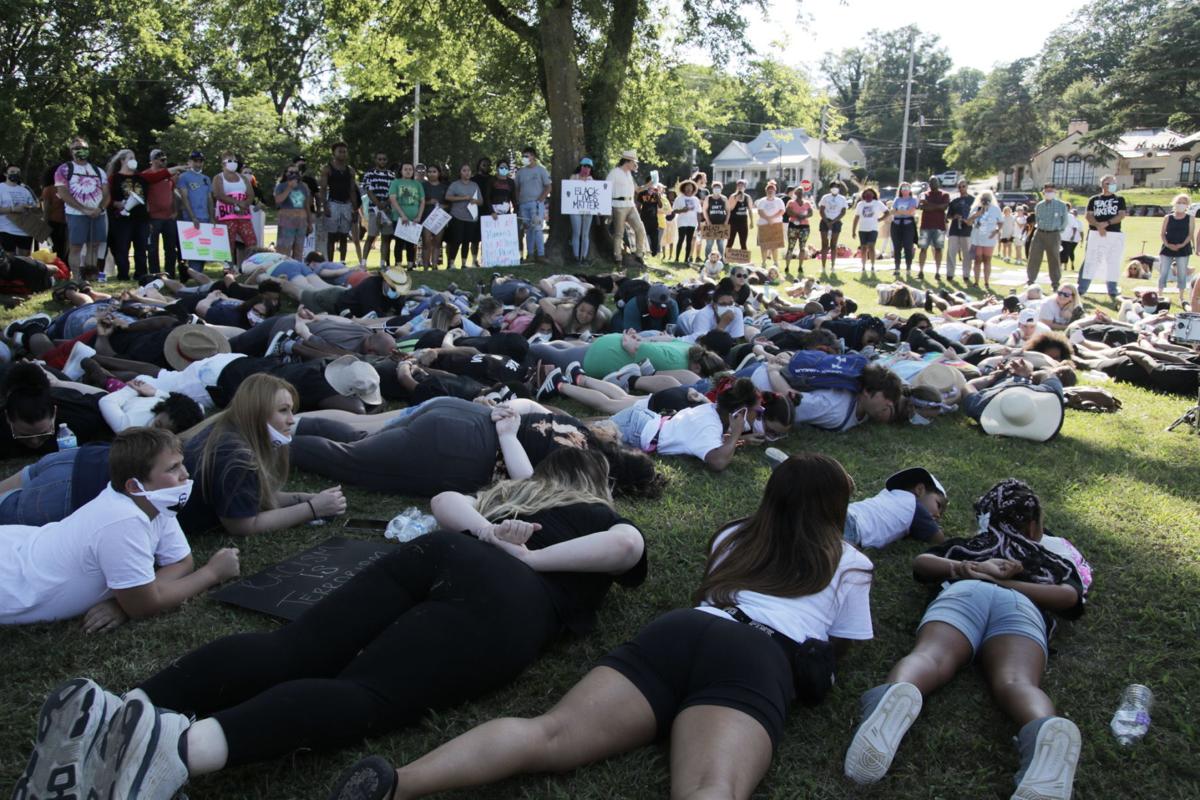 Before the march, participants lay on the ground for 8 minutes and 46 seconds as the last words of George Floyd were recounted.

The Unity March heads down Gunter Avenue with a "Black Lives Matter" sign leading the way.

March organizer Unique Morgan Dunston led the activities. She grew up in nearby Albertville.

The march heads along Blount Avenue.

Sheriff's office personnel wait with waters for the marchers.

Before the march, participants lay on the ground for 8 minutes and 46 seconds as the last words of George Floyd were recounted.

It was a humbling experience, filled with moments of pride and dark daggers of pain. I CAN’T BREATHE. 8 minutes and 46 seconds. Protesters laying prone on the grass, hands grasped behind them in the position of being painfully handcuffed. MAMA. HELP ME. The question that stabs my heart is always: Why do we inflict such pain on one another?

Oh, that I could be like Mother Teresa. That lady never worried one inch about herself. About the possibility of contracting a terrible disease. Me, I fretted all day long about whether I should “take the risk.” The reports out there make one ill with whiplash. Are masks good? Is it “OK” to march? (Remember Jennie, you will be 70 in September. And Jim is 74, and you’ve had a stent, and he’s had a bypass). It hits me. Hard. I’ve got the CHOICE to either march and take a risk, speak out for people other than myself or not march and protect my own life.

I can choose to stay home and nothing much will change in my life. This is a choice George Floyd never had. A choice Breonna Taylor never had. I’m trying to remember if I’ve ever had an instance of not being able to breathe. The closest I have been to that situation is nearly going under with a friend while swimming in the Gulf at Navarre. The terror. The wondering if this is it. The tiredness. The bewilderment. To go through that for even five minutes was an eternity. Someone – a terribly broken specimen of a human being -- was KNEELING on George’s neck. Every nerve system in the body was put under pressure by that evil knee. No wonder George was hurting everywhere. I’ve never had to plead with police to get off my neck.

This Unity March, my first time out in public for 3 months, 4 days and 6 hours, was healing and hopeful in so many ways. The opportunity to hear other’s voices express what I’ve been feeling, to have tears form at the corner of my eye, blinding me with the fog formed by the edge of my mask and my wrap around glasses. How spoiled I am. How lackadaisical I’ve treated my abundant freedoms, That, by the right of my pigmentation I don’t have to rehearse what to say when a white woman gets out of her car after the fender-bender, and, noting I am a young, Hispanic man, says to me in a clipped voice: “I assume you have no insurance.” That because of the chance of my birth, I am assured of fairer treatment from the people hired to protect and to serve. I know they were hired many years ago to protect and to serve ME. And the other members of the paler segment among us. That the cops won’t be called on me because I’m a teenager at a pool party or because I’m trying to catch sight of an elusive species of bird.

I don’t show it in action, as often as I should, but I know full well, I can’t take that right, that freedom, those choices that are “mine” until every one of us has those very same freedoms and choices.

A state highway runs through our town. Several blocks were cleared for the Guntersville march by our police, sheriff and fire departments. We marched down that street in a walk with others to honor not just those slain, but those who refuse to hurt others. Those who want change. And you know, when you end up going to these things, the immediate, IMMEDIATE sensation in the chest is that it was the right choice to make. I risk nothing, marching with us. Us, of many beautiful colors and styles, of many beauty marks and terrible scars. This is true community. I can speak my truth. The truth that so many wiser than us have always taught. That all life matters. From the trees to the dolphins, the bees, the bloody spiders. The mountains and skies are alive and matter. Every child from baby to senior adult of every color and religion. But when one of us is bullied. When some of us are made to feel less than who we are, all of us must attend to those of use in trouble. If not, what we have lost is our humanity. Our being fully human.

What's your opinion? The Advertiser-Gleam accepts letters to the editor on local issues. Email them to news@advertisergleam.com or mail to P.O. Box 190, Guntersville, AL 35976. Please include your phone number. We don't publish phone numbers, but like to have them for verification purposes. We also ask letter writers to include their address.

So glad this reader shared. It's so important to de-center ourselves as whites on this topic, and let black leadership LEAD. We stand with you!