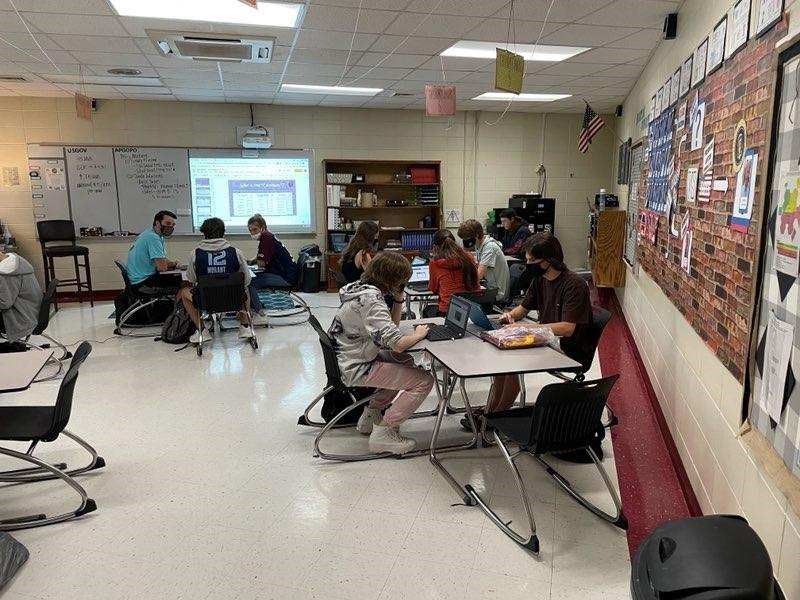 Because they are so much smaller than a normal classroom, GHS teachers have to use alternate desk arrangements to fit everyone in. 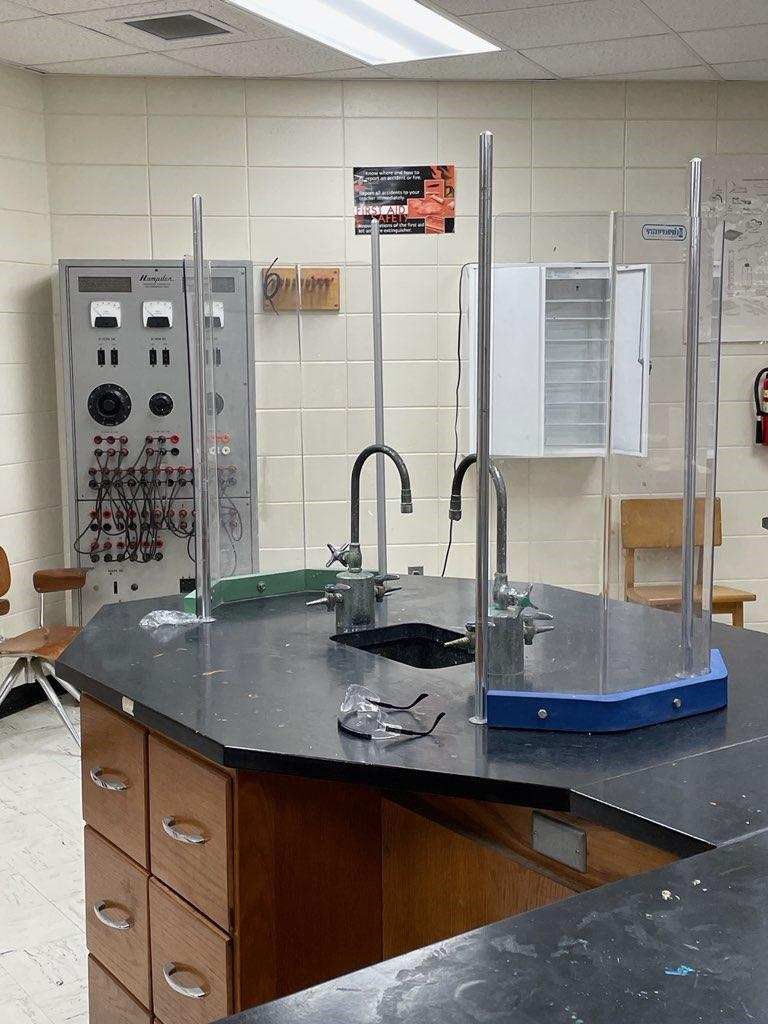 The chemistry lab at GHS is outdated. No one knows what the contraption on the wall is or what it was used for.

Because they are so much smaller than a normal classroom, GHS teachers have to use alternate desk arrangements to fit everyone in.

The chemistry lab at GHS is outdated. No one knows what the contraption on the wall is or what it was used for.

The principal at Guntersville High School, Roseanne Mabrey, is in support of the proposed property tax increase, which residents will be able to vote on in a special election Tuesday, May 11, to fund construction of a new high school.

She says she is not the only that, that the referendum has the support of the majority of teachers, staff, administration and even current students who are eligible to vote in the Guntersville City School System.

The problems associated with the existing high school are numerous, but there are two critical areas of concern that need the most attention: Safety and space.

“School safety is our number one priority,” Mabrey said. “When we’re looking at the space in our hallways and the amount of children we have… when we practice fire and weather drills, we need to get out as quickly as possible. Modern school hallways are much wider than ours are and, of course, we’re in this circular pattern… it’s just interesting when you’re trying to get the entire student body out at one given time.”

Modern schools are also built with storm shelters or safe rooms and they are more handicapped accessible than a building that was constructed in the 1970s. They also have limited points of entry into the building.

“A modern school wouldn’t have as many exterior doors as we have,” Mabrey explained.

Another potential safety issue is the lack of windows in the school. An unusual design feature in any decade, power outages at the high school are downright scary and possibly dangerous.

White not only teaches AP calculus, physics and engineering, she is also a graduate of Guntersville High School. Her oldest child will graduate from her alma mater in 2025. With nearly 30 years between their classes, she hopes it won’t be from the same building she graduated from in 1997.

“This school was old when I was here,” White said. “I think it would be really special for my daughter to be a part of moving into the 21st century where our classrooms can be set up to be more conducive to using different work spaces.”

A lack of space is a main issue for GHS. Physically speaking, the school has long since maxxed out on capacity, halting growth and taking up what little storage the building provided.

“There is not one extra classroom in this building to put another teacher in,” Principal Mabrey said. “There is no room to grow. We’ve converted every book room and storage room we have into classrooms."

And it’s the programs that will ultimately suffer if there is no room to grow. Elective classes now focus on more career oriented pathways and include programs such as STEM, Information Technology, Engineering and Health Science. These programs continue to grow whether there is space or not.

While the average modern classroom is at least 900 square feet, classrooms at GHS are only 600 square feet, tops. Many rooms are triangular in shape and cut off crucial corners, which could offer more space. The odd design might have been cutting edge when it was built, but it doesn’t function properly in today’s world of interactive teaching methods.

Nevertheless, the teachers have gotten creative with different types of seating, using tables instead of desks in some cases. One classroom uses no desks at all, only chairs, to create more space.

Aside from safety and space concerns, the high school has many maintenance issues that need to be addressed, including a leaky ceiling and exterior doors that don’t seal correctly.

“If there’s not a new school, there is going to have to be a lot of money to maintain this structure,” Mabrey said. “And that is going to be very expensive. So, do we want to keep pouring money into something as out of date as this school is?”

The original high school was built without a kitchen, under the assumption that food would be brought in instead of cooked there. When that plan fell through, several classrooms were taken over to construct a modest kitchen.

Further down the list of concerns is how the currently outdated school looks as a representation of the city of Guntersville.

“Aesthetically speaking, the schools are usually that first impression you have of a city, especially when ours is such a focal point,” Mabrey said. “I know I pay attention when I go into other towns. When you see out-of-date facilities, it makes you question what the community values and what they’re willing to invest in. So, are you going to invest in the education of the children? It’s important. Just because it’s well-maintained, doesn’t mean it’s the best we can do.”

Mabrey stresses that there is no Plan B if the property tax does not pass. And updating or adding on to the current building is out of the question, as the cost could prove to be higher than building a new school altogether.

“We will keep doing the very best with what we have, but without the tax, there will be no growth in the career pathways that we can offer,” she said. “We will not be able to expand anything and we’re already limited with what we have.”

The school system does receive half of the 1 cent sales tax increase that was passed in 2019 (the city receives the other half). Simply put, though, it is not enough to fund the construction of a new building.

“The bond is going to address all the issues,” Mabrey explained. “The high school is the first thing, but there are so many other improvements needed in our school system. This will be a forever funding source to keep our schools up to date. That’s one of the reasons I think it is so important; it’s that source to get everything taken care of, which school systems need to keep their facilities up to date."

A government teacher at GHS, Sherry Brown, took the upcoming special election as an opportunity to teach her students about policy. She held a debate in her class about the property tax proposal after they studied the exact wording of the referendum.

“We looked at what the money would be applied for and how much it was going to cost taxpayers, along with long term effects,” she said. “They’re seniors and they know they’re not going to reap the benefits of a new school, but they looked at it as a great long term goal for Guntersville; so that if they moved back here in the future, their children will have a newer school and not have to go to the same school their parents did.”

While not all of her students argued for the tax increase to be passed, and Brown herself can see both sides of the issue, they asked all the right questions and raised interesting points.

“One of my students pointed out the increased prices of building materials,” she said. “Their argument during the debate was that building materials will just continue to get higher, but the need for a new school is not going to go away. So, it may cost $43 million now, but if we don’t get it passed, we’re still going to need a school. We’re still going to have to find a way to pay for it and down the road, it’s probably going to cost even more. I thought that was a really good point.”

The proposed ad valorem tax referendum increase of 7.5 mills would generate approximately $1.29 million per year for the school system. The special election will take place on Tuesday, May 11,  between the hours of 7:00 a.m. and 7:00 p.m.