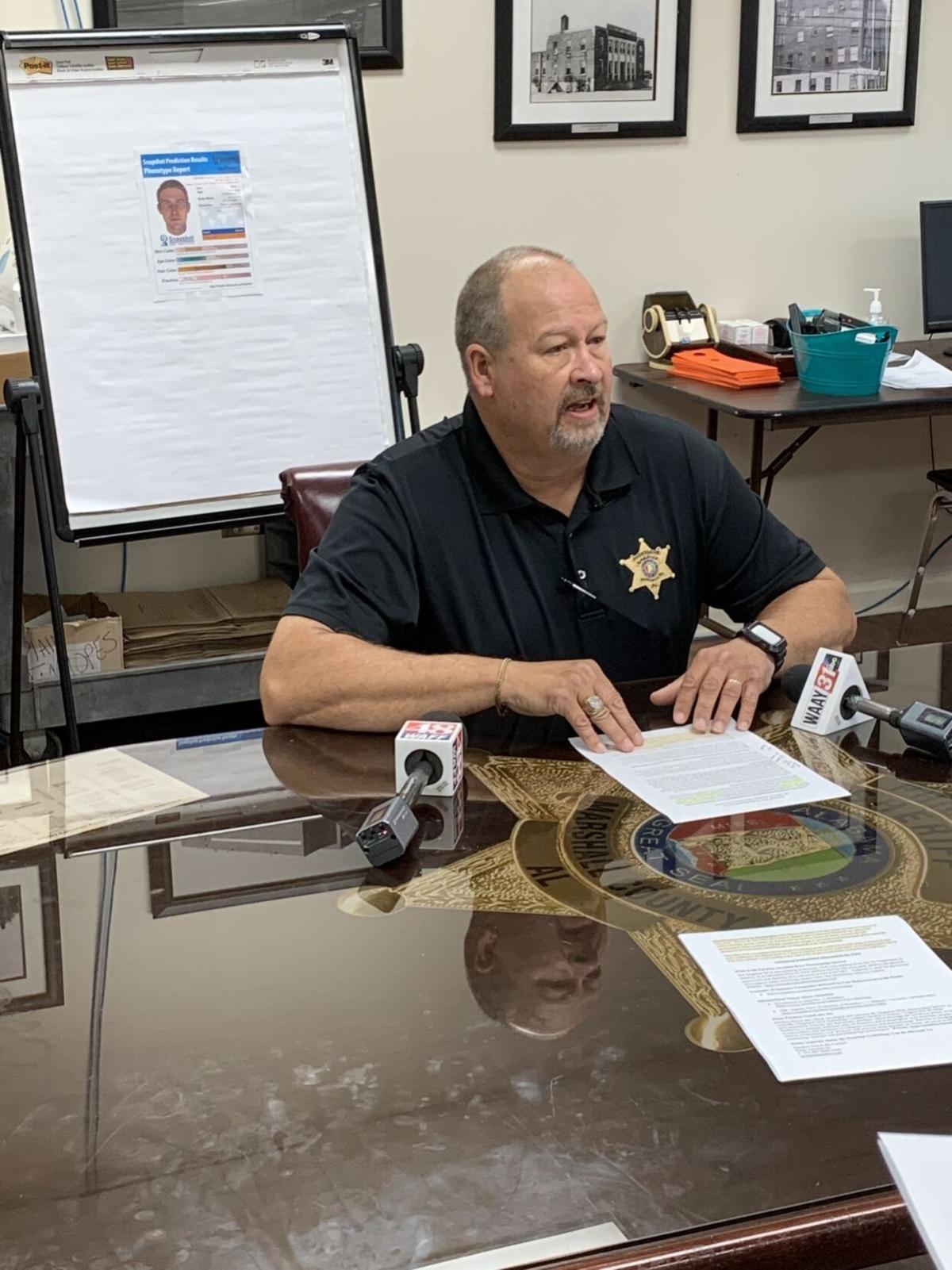 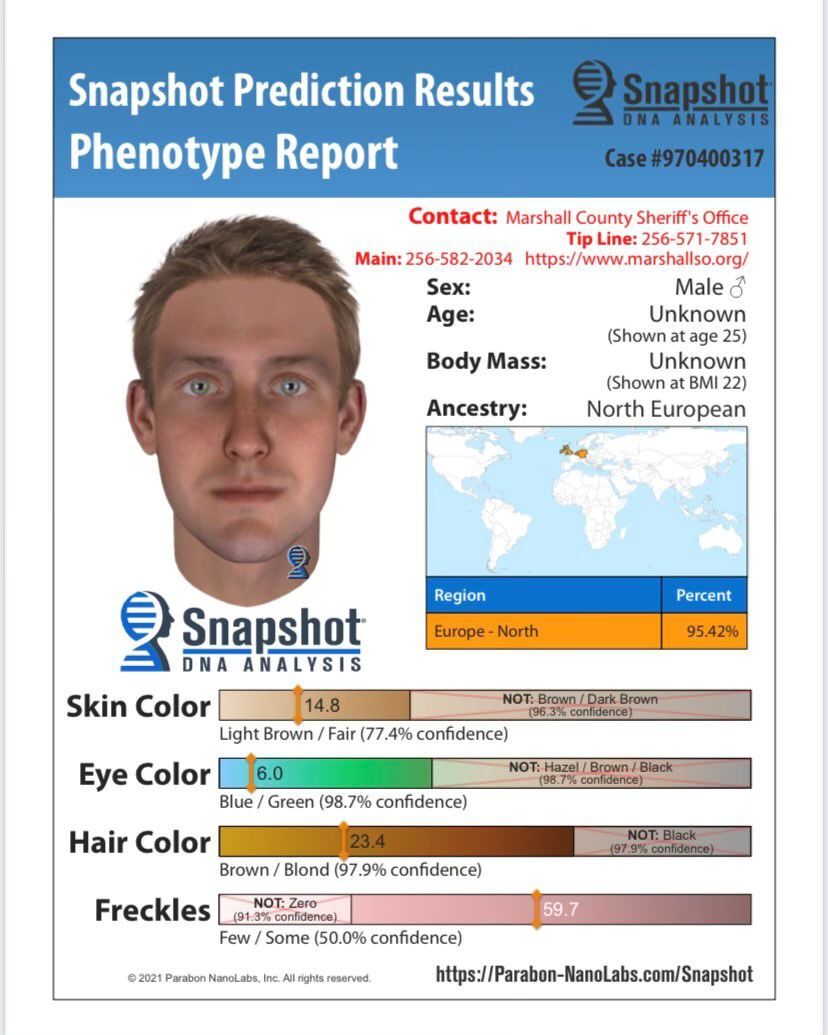 A DNA lab generated this possible image of a crime victim who was found in Marshall County in the 1990s. His identity has never been found because his head, hands and feet had been removed and his heart had been cut out.

A DNA lab generated this possible image of a crime victim who was found in Marshall County in the 1990s. His identity has never been found because his head, hands and feet had been removed and his heart had been cut out.

Keith Wilson, the chief investigator in the Sheriff's Office, hopes some new information could help close the one of the office’s oldest cold cases.

Partnering with Parabon NanoLabs, the Sheriff’s Office has received a facial rendering of a victim found 21 years ago in a creekbed near Arab. The headless victim was discovered by a young man playing hooky from school, Wilson said.

“I’ve worked on this case my whole career with the Sheriff’s Office,” he said. “Using DNA and genealogy, this service can tell you the shape and size of the face, hair and eye color and skin color.

“Based on what they found, we are seeking help from the public to identify the victim,” Wilson continued.

Wilson said the service cannot predict aging, damage from smoking or drug use, or scarring that may have occurred on the body.

Snapshot DNA phenotyping technology, built with funding from the U.S. Department of Defense, is an advanced forensic DNA analysis service that accurately predicts the physical appearance of an unknown person from DNA, according to Parabon NanoLabs.

The body was discovered in Cotaco Creek, on Eagle Rock Road , north of Arab on April 15, 1997, Wilson said.

“Someone went to a lot of trouble to conceal the identity and cause of death of this person,” he said. “The body was missing its head, hands and feet, and the heart had been removed.

“In all these years, we have followed leads and tips but it has all gone to dead ends,” Wilson said.

After a year working with Parabon NanoLabs, officials believe the victim had light brown or fair skin color, blue or green eyes, and brown/blonde hair.

“This is the first case where we have been able to use this service,” Wilson said. “You have to have a pretty specific kind of case for this to work.

“If we ever have another case of this type, we will definitely use this service again. It will be our first call.”

“For an agency of our size, this is really affordable,” Sims said. “They only billed us when the work was done.”

The service has uncovered distant cousins of the victim in South Alabama, Texas and Virginia, but believe they did not know the victim. Additional relatives may be found as DNA tests continue searching a variety of databases, such as 123 and Me and Ancestry.com.

“We want justice for the victim,” Wilson said. “We hope to find his identity and be able to piece together what happened to him in the end.

“This is the only cold case we have where we do not have an ID on the victim.”

The body was found by a child who skipped school for the day and had been playing in the creek. He came across the torso and told family members what he found. The family, in turn, called police.

Officials believe the victim was placed at the creek and not killed there. The victim sustained “sharp force trauma” leading to his death, Wilson said.

The area is considered a rural area near the Marshall/Morgan county line. Wilson said the area is prone to flooding and the torso was found in an advanced state of decomposition.

In a press release from 2019, Wilson said three days prior to the discovery of the body, witnesses described seeing an “early 1990s model, maroon, Chevrolet truck with tinted windows in the area.” Wilson also said the truck was driven by a white male and was seen leaving the area near the location the body was found.

Officials believe the person who committed the crime had “a good understanding of anatomy.” He said there were “surgical type wounds” in the victim’s chest that could’ve been to “most likely” hide a gunshot and/or where bullets were removed.

Wilson said in 2019 they do not believe the victim was from the area. However, he said “somebody local may have placed the body there. It’s not just a place you just find. It’s a remote area.”

Continuing the investigation hasn’t been easy.

“Working this case has been a challenge,” Wilson said. “Your day-to-day calls keep coming … burglaries, assaults, things of that sort.

“But we find time and we find services like this that can help us.

“We are asking the public to look at his face and see if they know him. We feel like he’s a missing person that no one has reported as missing.”

Sims said when he took office, he spoke with his team to find out what could be done with cold cases.

“When they brought me this option, I said absolutely,” Sims said. “All leads and interviews we have done up to this point have gone nowhere. We don’t know who is telling the truth. If we can identify the victim, we can solve this case.”