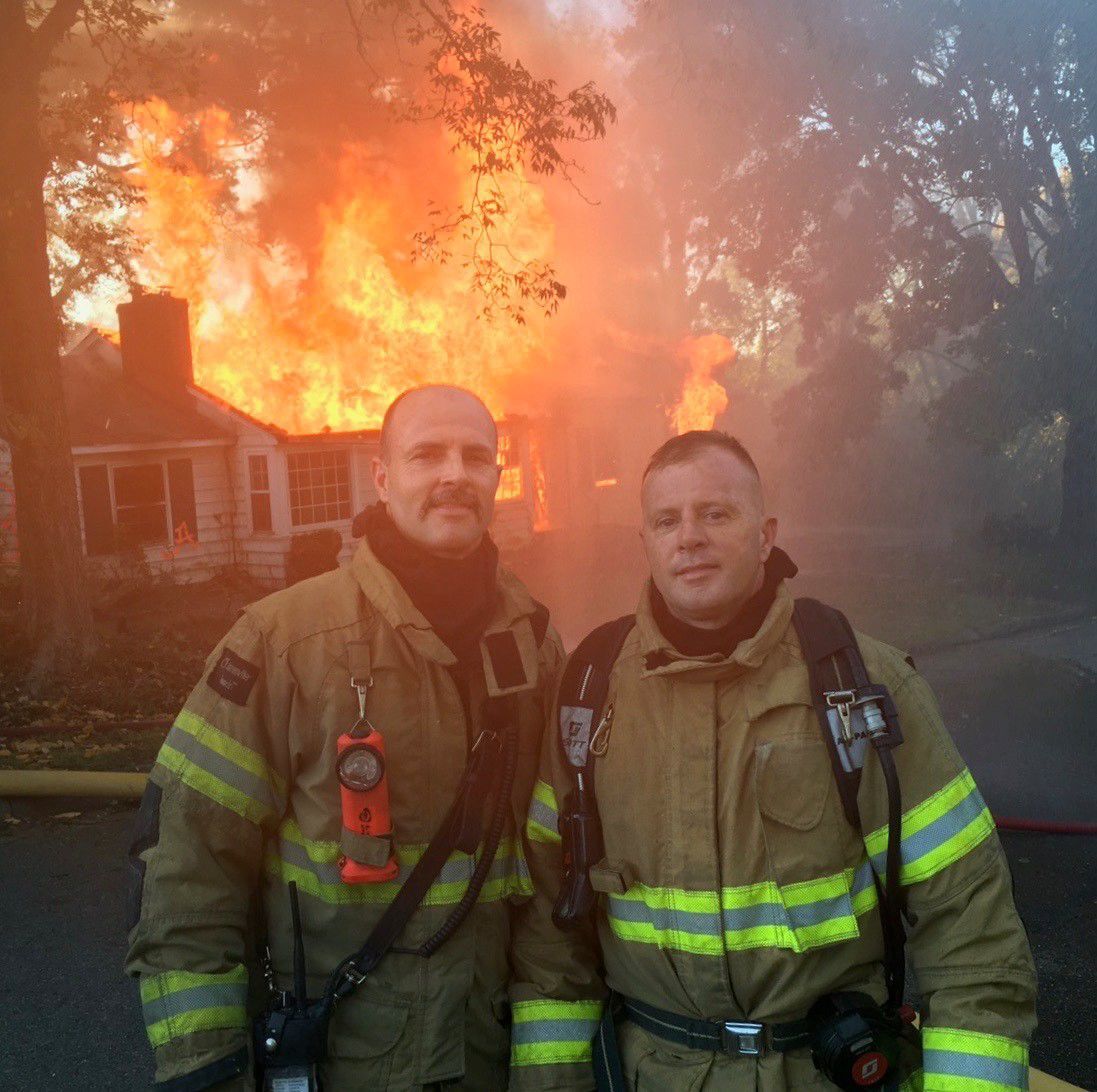 Brian and Greg Dorsett of the Guntersville Fire Department are shown at at training fire shortly before Brian's retirement. 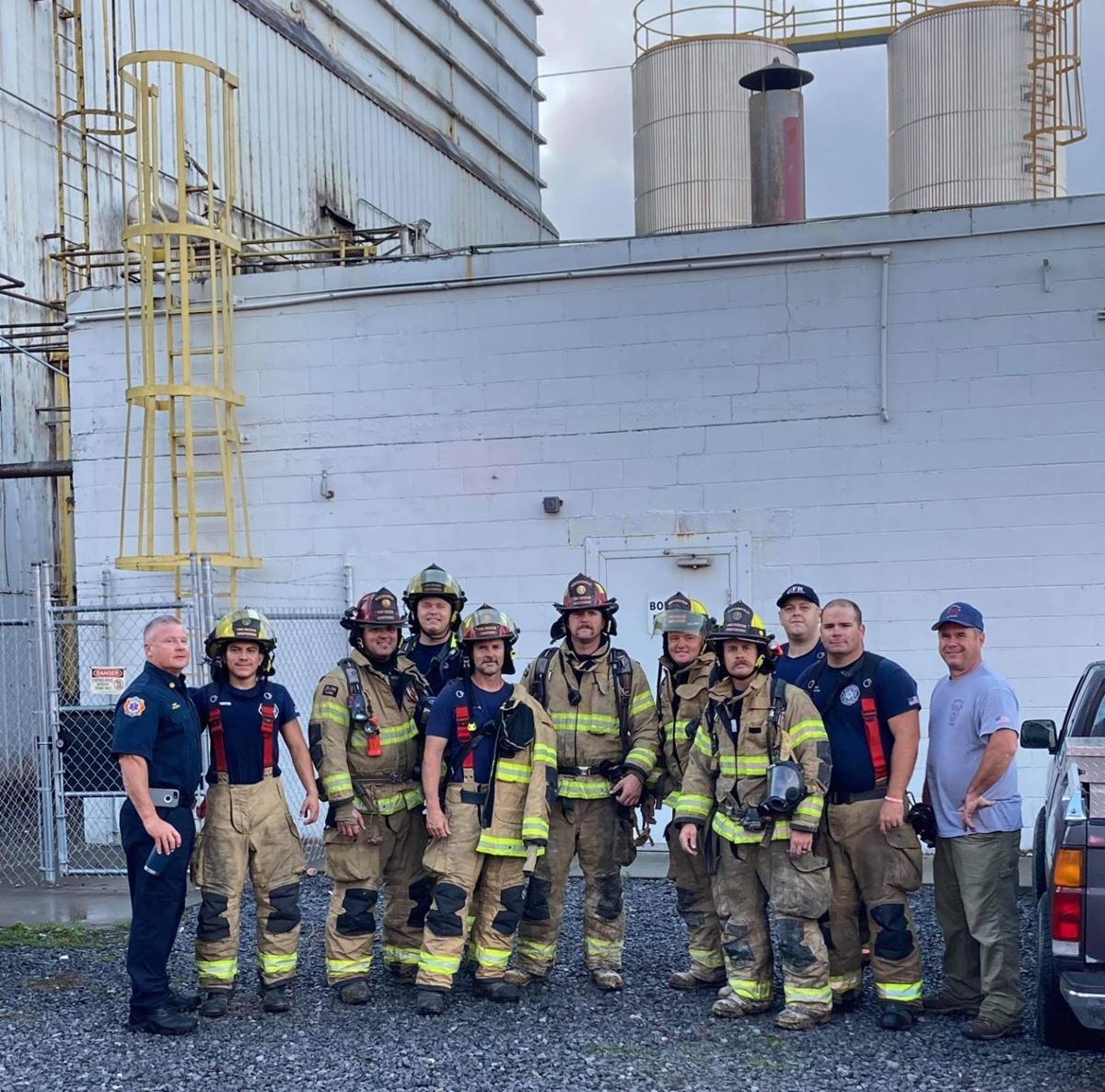 This was the crew on the last feed mill fire Brian Dorsett fought.

Brian and Greg Dorsett of the Guntersville Fire Department are shown at at training fire shortly before Brian's retirement.

This was the crew on the last feed mill fire Brian Dorsett fought.

Capt. Brian Dorsett has retired after 27 years with the Guntersville Fire Department.

He said he’ll miss the guys, but he just felt like it was time for him to do some things he wants to do. He has already taken up crappie fishing and he’s really enjoying it.

Brian got his start with the fire service volunteering with Nixon Chapel Fire Department. Wesley Mann, another Nixon Chapel volunteer who went on to become a longtime Guntersville firefighter, asked if he would volunteer.

“I took the 160-hour certification class for volunteers and it grew from there,” Brian said of his desire to become a full-time firefighter. He still pitches in when Nixon Chapel has something big.

He spent his entire professional firefighting career with Guntersville and retired at age 51.

“My wife Andrea works in the probate office,” he said. “She has health insurance, so that made it possible for me to retire,” he said.

He started as a firefighter and ended up a captain, the rank he’s held the last 6 years. His brother Greg Dorsett is also a captain and is a few years away from being retirement eligible.

He has a few things he wants to “knock off” the bucket list. He hopes to do some long-distance hiking and canoeing at some point, He’s interested in the Pinhoti Trail that runs from Sylacauga to Cave Springs, Georgia.

“Even if you’re not on duty, you’re listening for a tone,” Brian said. “It’s like the Christmas day fire many years ago at the bowling alley. My brother and I got up from our momma’s table eating Christmas dinner to go fight that fire.”

He said some of the guys got to talking about calls shortly before he retired, particularly challenging extrications of patients from vehicles.

“I’ve run a lot of calls and I couldn’t remember some of the ones they talked about,” he said. “They start to run together.”

“I remember being on a call where a kid had fallen off a bluff,” Brian said. “I was green as a gourd. I said right then that would never happen again. I kind of took it upon myself to train up real good on rope rescue and to make sure our other guns were trained up. Rope rescue is just like any other aspect of the fire service. It can be super dangerous if you’re not well-trained. Murphy of Murphy’s Law will find you.”

With Brian leading the way, the Guntersville Fire Department became a resource that lots of surrounding departments called upon.

There were lots of big notable fires Brian worked over the years. They included the bowling alley fire, the First Baptist Church fire, the Val-Monte restaurant fire, several dock fires and just about all the feed mill fires. Feed mill fires are particularly dangerous because the dust is so volatile and explosions can happen. They’re a bad scenario for firefighters.

“I was around long enough that I worked the Reid’s Restaurant fire,” Brian said.

While he plans to enjoy his newfound free time, he said he’s going to miss the people he worked with.

“I enjoyed a great career,” he said. “I worked with a bunch of good guys. Chief Brian Waldrop and deputy chief Brian Walls are the two best bosses you could ever have. I hated to leave but I was ready to spend nights in my own bed. It takes a toll on you over the years.”

He said the guys he worked with are like family too.

“I’ll keep on praying for my guys,” he said.