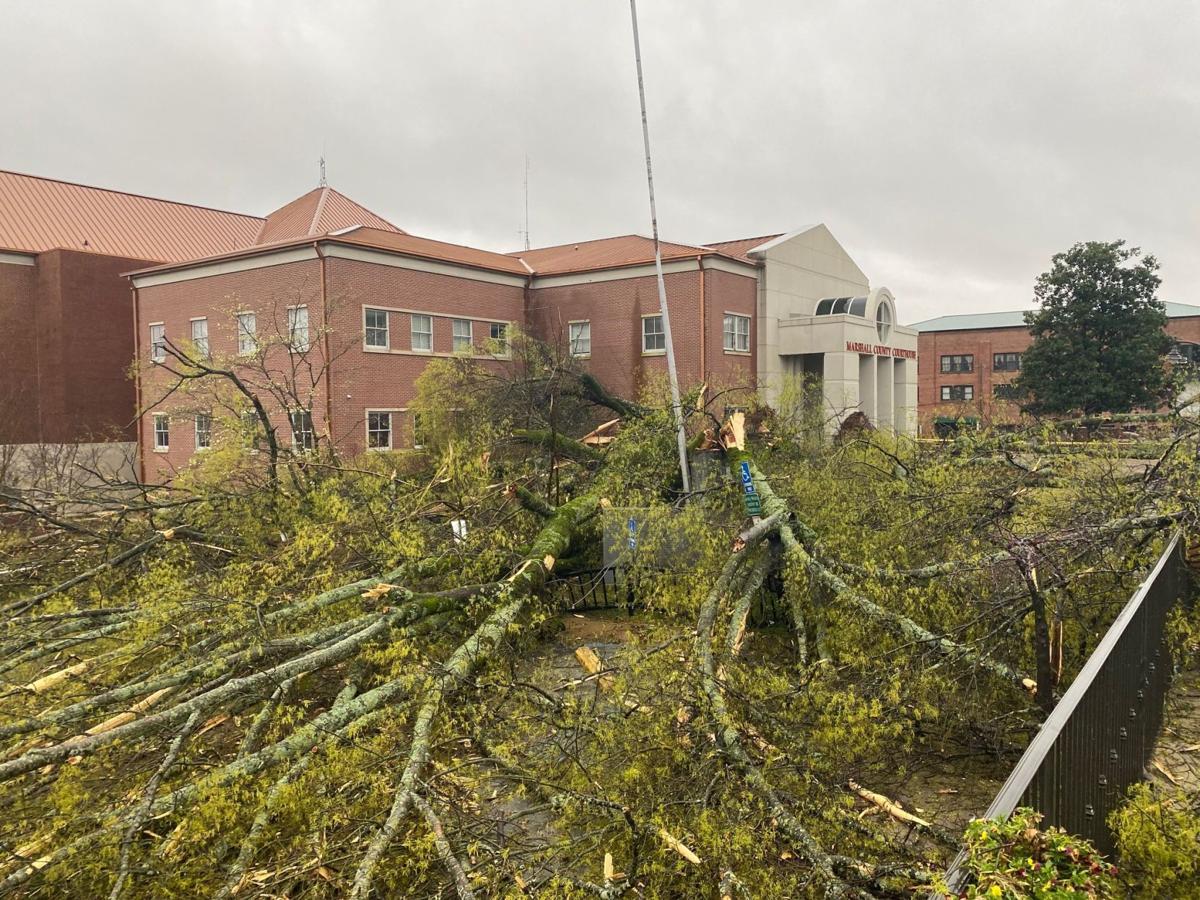 This was the scene Sunday morning when two century-old oaks toppled over at the Guntersville Courthouse during a strong storm. 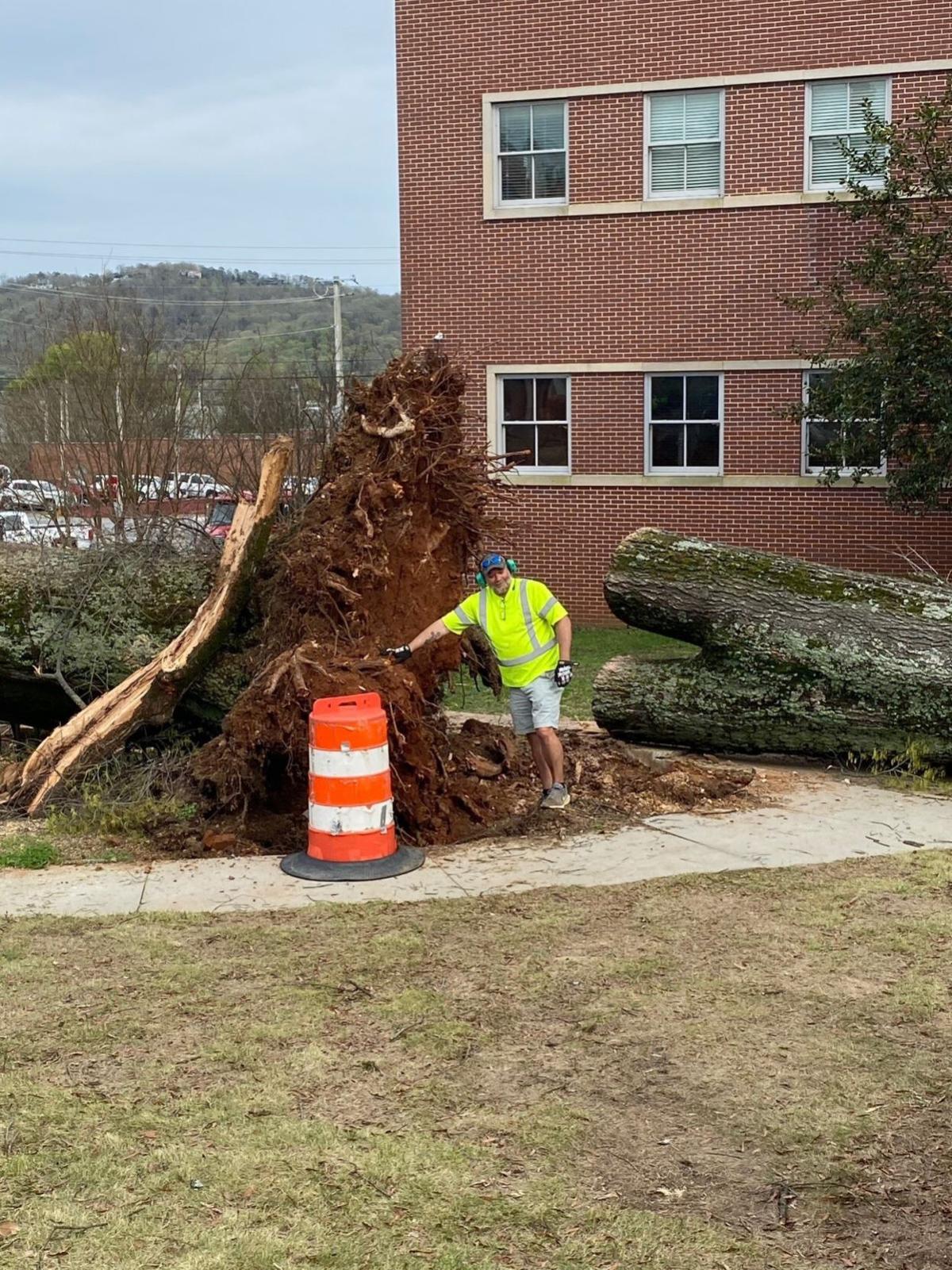 Commissioner Lee Sims stands by the giant root ball of the largest oak, giving a real idea of its size. But the roots were very shallow, practically on top of the ground.

This was the scene Sunday morning when two century-old oaks toppled over at the Guntersville Courthouse during a strong storm.

Commissioner Lee Sims stands by the giant root ball of the largest oak, giving a real idea of its size. But the roots were very shallow, practically on top of the ground.

What is it about Palm Sunday and severe weather in Alabama? There have been tons of bad storms on that particular day over the years.

Shortly before daylight, a strong storm roared through Guntersville. It downed trees all over town and caused 2,500 or so Guntersville Electric customers to be without power. It put a lot of trees on the ground in the lakeside community of Signal Point.

But the most visible and dramatic damage – and the one everyone was talking about – were a pair of century-old oaks on the Courthouse lawn that were blown over. The trees were simply massive.

“If they had to blow down, they blew down in the very best place possible,” County Commission chairman James Hutcheson said.

The trees missed the building and came down on top of the Veterans Memorial corner instead. The fence around the memorial was crushed, but it was thought that much of the statuary in the memorial remained intact. Clean-up efforts were ongoing into Monday.

The storm struck around 6 a.m. Sheriff’s deputies were among the first on the scene. Following soon after were Revenue Commissioner Michael Johnson and citizen Dewayne Wray. Wray works for Marshall Industrial, a private firm, and jumped right in and went to work as though he were a county employee.

The elected officials – even Revenue Commissioner Johnson – donned work gloves and went to work running saws and picking up limbs right alongside their crews in a massive clean-up effort.

“We tried to get a tree service out right away, but they were busy this morning,” Chairman Hutcheson said. By the afternoon, Douglas Tree Service was present as was Whitaker Towing with its cranes. The Douglas crew sawed up the massive trunks with giant chain saws and Whitaker used the crane to lift them.

According to Guntersville historian Macey Taylor, the oak trees were planted 102 years ago. There were 20 originally. They dwindled to 5. Three more were lost in the last 50 years and these were the last 2 remaining. The history of the trees is detailed inside this paper.

EMA director Anita McBurnett felt the storm that hit the Guntersville peninsula was straight line winds rather than a tornado.

“It was a tree here, a tree there,” she said. “There’s not enough evidence to support it being a tornado.”

A damage assessment was yet to be done at Signal Point, which appeared to have been hit harder than downtown, according to city officials.

District 3 Commissioner Lee Sims didn’t get the word early that all the district shops had converged on the Courthouse to help with the storm recovery. But he came in as soon as he did.

“I’m the second shift,” he quipped.

He also observed that while the giant oaks had massive rootballs, the roots weren’t particularly deep and that might have made it easier for them to topple.

“I was really surprises that those trees didn’t have more of a root system than they had,” Chairman Hutcheson said. “When I heard they’d fallen, I expected the sidewalks and everything to be torn up. Those trees were just sitting on top of the ground really.”

The Courthouse was able to open on time as usual on Monday morning, although the side parking lot was closed for the equipment cleaning up the large trees.

“The monuments came through it in good shape,” Chairman Hutcheson said. “We will get a nice new fence around it and we will make it look better than it did before.”

He also saw the bricks from the old well on top of the ground.

“We will check that old well out and make sure it is safe before we do anything,” the chairman said.

He plans to consult with City of Guntersville horticulturist Wendy Walker about a landscaping plan for the Courthouse lawn.

“It was a good effort to get this cleaned up,” Chairman Hutcheson said. “We even had some citizens helping us. I hated to lose those trees but I am glad it turned out as well as it did.”