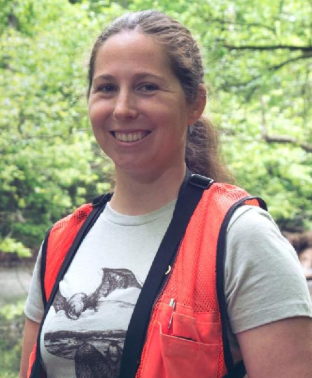 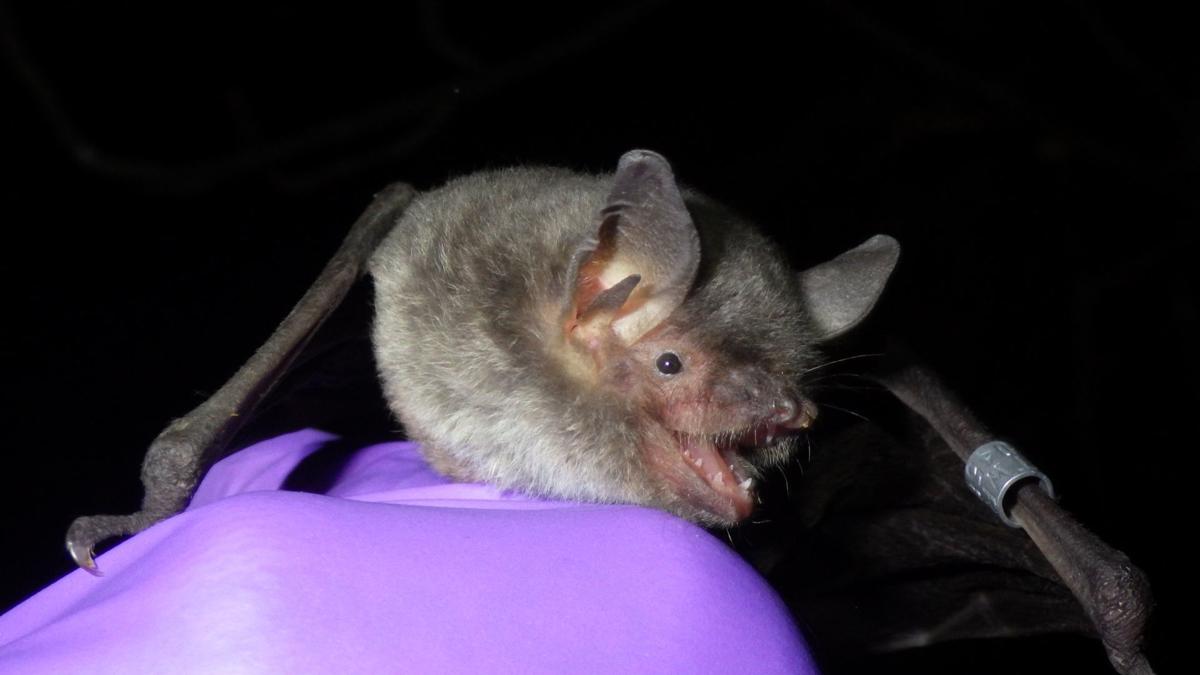 This picture is of a gray bat. Hundreds if not thousands of the bats emerge nightly in the summer at the Hambrick Cave. 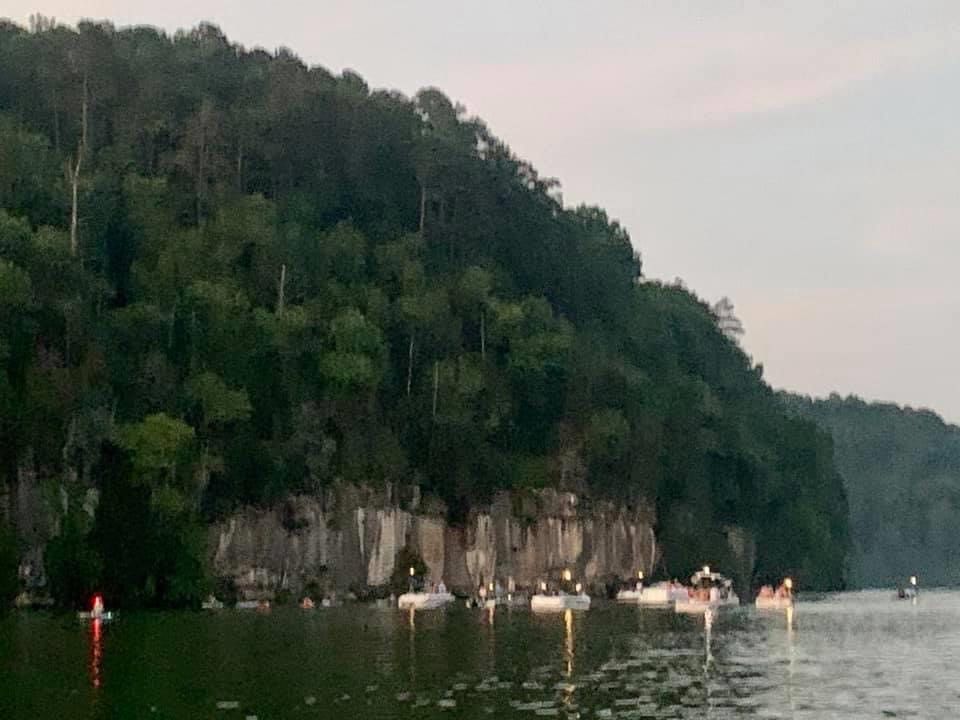 Boats by the dozen gather nightly at Hambrick Cave on Guntersville Lake to watch the gray bats emerge at dusk. It's a rite of passage of summer to make the trek to the cave if you're a boater.

This picture is of a gray bat. Hundreds if not thousands of the bats emerge nightly in the summer at the Hambrick Cave.

Boats by the dozen gather nightly at Hambrick Cave on Guntersville Lake to watch the gray bats emerge at dusk. It's a rite of passage of summer to make the trek to the cave if you're a boater.

Liz Hamrick, a TVA biologist, was over at Hambrick Cave counting bats recently, but reporters were not allowed to go with her because of the restrictions due to COVID-19.

Bat populations in the region have been monitored since 1976. There has been an estimation of 10,000 to 322,000 bats in the Tennessee Valley area.

TVA and the Alabama Department of Conservation and Natural Resources have been working together to monitor this cave since the 1990s. The population at this location typically ranges from 20,000 to 30,000, but the high point has been 60,000. This year Hamrick said they counted 62,998 bats emerging from Hambrick Cave.

Researchers are learning more about these federally endangered gray bats all the time and are coming to realize how frequently bats move between caves, selecting different caves between season and year.  Recent efforts have tried to track the bats using radio transmitters and airplanes.  Hambrick Cave is consistently used as a "maternity cave" by gray bats in summer, though the number of bats using it each year fluctuates.  The mothers have their pups in the caves and leave each night to find food.

Hamrick finds it amazing how the mothers are able to find their pup among the thousands that are in the cave.

She explained that the Hambrick Cave is protected. There is a gate across the mouth of the cave that  has been there for decades. The reason is to protect the bats.

This cave is only used in the summer time by this species. Hamrick said the reason for this is because bats need a cooler environment in winter for torpor (hibernation). Winter hibernacula are not as hot and the environment is more stable for the bats.

White-Nose Syndrome is a novel virus that was brought to the United States from Europe and while it is still an issue for the cave dwelling bats across the nation, the gray bat still seems to be doing well.

White-Nose Syndrome is an emergent disease of hibernating bats and is named for the white fungus that infects skin of the muzzle, ears and wings of the hibernating bats.

The gray bats are known to carry the fungus, but they do not show signs of succumbing to the disease.

“The gray bat is our shinning star of hope,” Hamrick said.

Gray bats live in the southeast part of America and are tiny. These bats are typically less than 10 inches in size and weigh between 9 to 12 grams. Hamrick describes them as a petite bat compared to those that most people think of from the tropics.

The gray bat tends to live in large colonies, but they like caves. The temperature is right along with the humidity. In the summer months they tend to break up into smaller groups, but the winter months they group up again.

Fern Cave in Jackson County is the largest explored bat cave in the Tennessee River Valley area. They have counted over 2 million bats in that cave in winter.  Most of these gray bats disperse to other caves during summer months but then come back in winter.

Hamrick explained that their count is done the old fashion way, but there is an added new way. In the 1900s, the count was visual. You had to sit at the entrance and literally count the bats as they emerged. All surveyors counted for one minute and then they rested for a minute. Counts were averaged across surveyors, then added up, and then multiplied by two (to account for the resting minute). They counted the bats until it was too dark or all of the bats were out of the cave.  She said it starts out as a slow count such as 1, 2, 3 but then quickly jump to counting by 10, 20, 30 and sometimes it would be a lot higher by the 100s.  She said the count may not be perfect, but it shows population trends.

More recently they are doing the count along with using infrared cameras to compare to their visual count. The amazing thing with the visual counts is that the numbers are fairly close to what the infrared camera results have been.

Gray bats are an endangered species. TVA has a mandate to make sure they are not harming any endangered species or their habitats, but they also have to promote conservation for the species. While gray bats roost only in caves, other species of bats roost in trees.  Hamrick said because TVA has to cut down some trees for powerlines, there is a frequent need to review project areas to make sure they are not disturbing something endangered.

There are hundreds if not thousands of caves that TVA keeps an eye on. Hamrick said the goal for TVA is to minimize impacts and promote recovery of imperiled species and rare habitats like caves. They want to help the bat populations recover and grow in numbers.

Hambricks Cave is monitored every year along with at least five other caves in Guntersville alone that are routinely used by endangered bats populations in the summer and winter months. There are hundreds of caves in the northern Alabama area and TVA’s focus is typically the summer and winters.

So, what makes the bat so special for us?

Well, bats manage pests. Hamrick said it is good to have them for agricultural purposes. They like to eat beetles, small insects such as mosquitoes and they save millions in pesticides for farmers.

Hamrick encourages you to put up a bat box near your garden. There are lots of tutorials on how to build a bat house. It is important to help these little gray bats to thrive. If you are looking for more information on bats you can visit batcon.org.

If you are interested in watching the bats fly out of Hambrick Cave, you can take a boat to the location, which is not too far above Guntersville Dam. They come out at dusk and their highest numbers are in June and July. There are still a few bats most evenings in August. You will need to stay away from the gate and be quiet. You are asked to not have your lights on over there because it impacts the bats as they emerge.

Bats tend to travel miles during the night. Hamrick said gray bats have been recorded traveling up to 10 miles to a destination to forage and 10 miles back to their home in the same night.

There is rumor that COVID-19 was started because of someone eating a bat in Asia. While there are viruses in bats, recent science shows that there was an intermediate host for this virus meaning people did not get COVID-19 from eating a bat. Hamrick said the bats in our area do not have COVID-19.