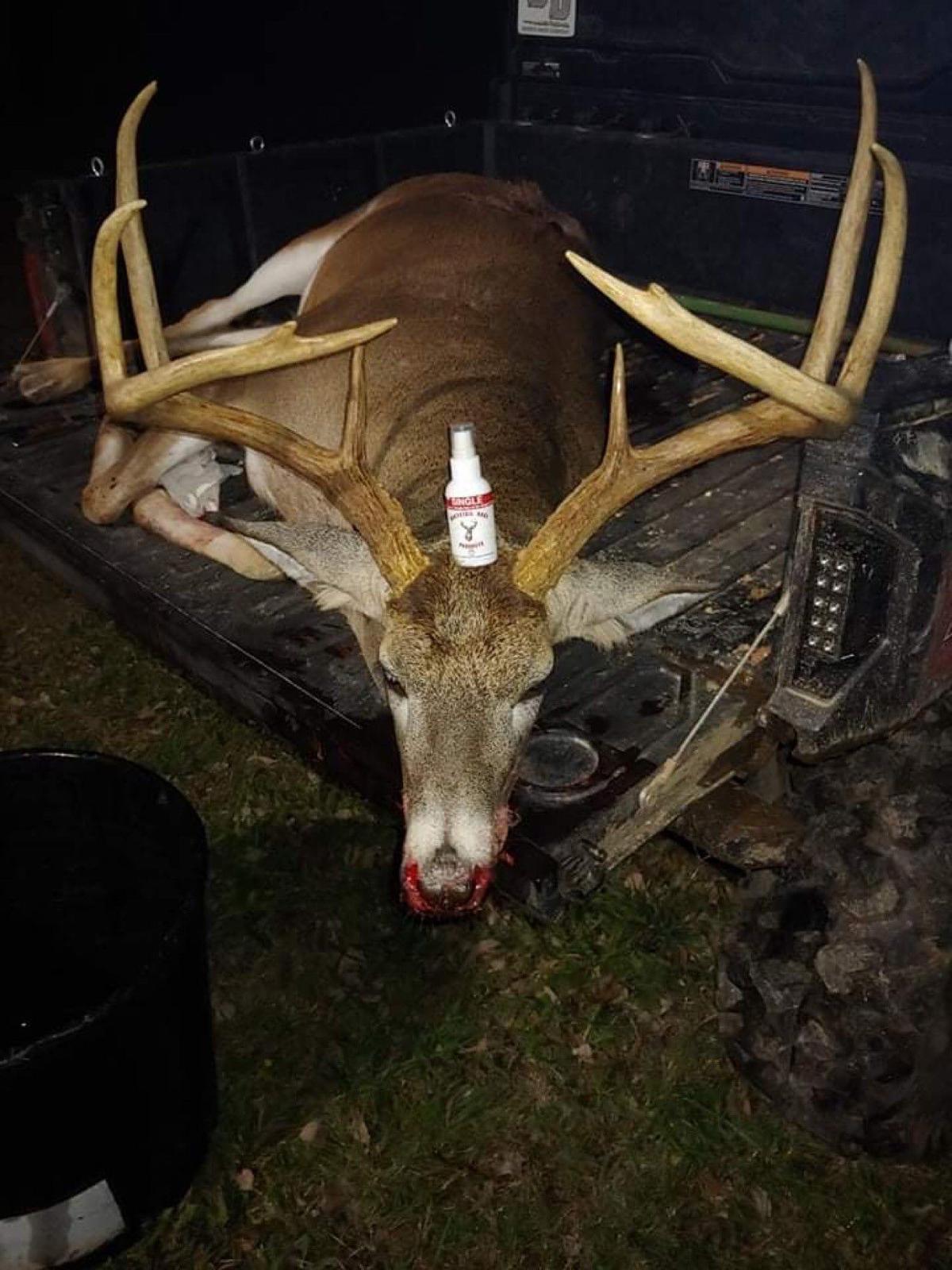 Wade Morrison killed this buck near Grant using his own brand of bottled doe urine. It's the biggest, widest buck Wade has ever taken. He had not shot a buck in 5 or 6 years. 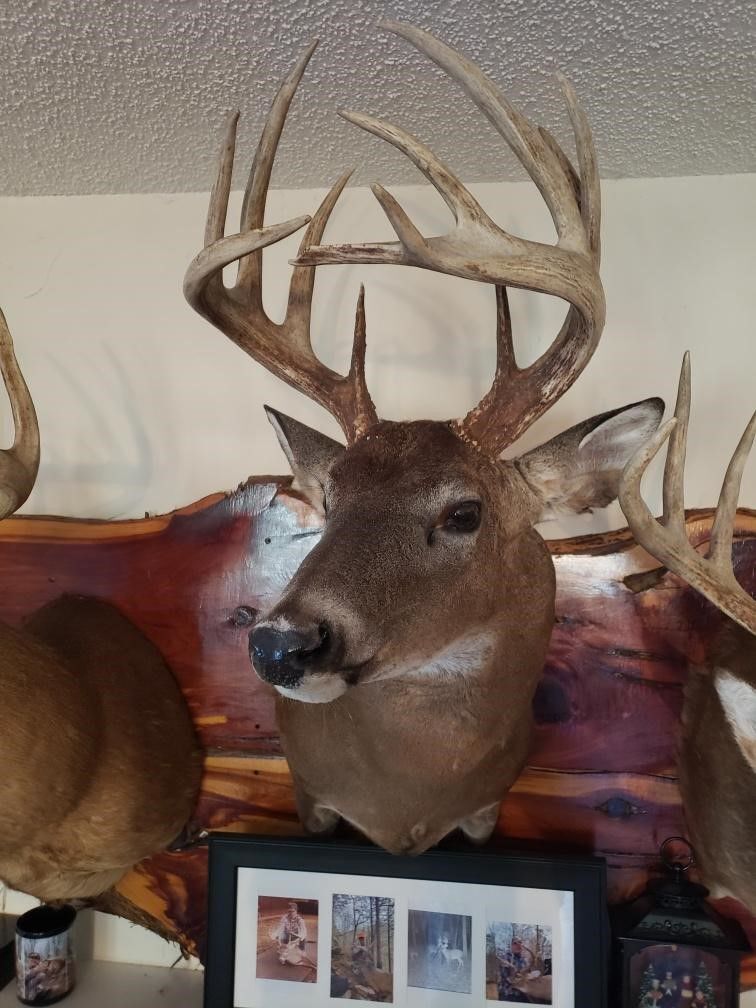 Kalvin Click took this buck last season, in early February rather than January. It scored 159.

Wade Morrison killed this buck near Grant using his own brand of bottled doe urine. It's the biggest, widest buck Wade has ever taken. He had not shot a buck in 5 or 6 years.

Kalvin Click took this buck last season, in early February rather than January. It scored 159.

Lots of deer hunters feel the closer you get a buck to home, the more special it is.

And if you get it using “your” technique, that makes it even better.

The buck Wade Morrison of Grant took last week is certainly one he will never forget.

That’s a career deer for just about anyone in these parts and it’s the biggest one Wade has ever taken. He got it on his own place. And since 2006, Wade has owned a deer scent company, selling bottles of deer urine to hunters as a deer  attractant. The business is called Whitetail Rage and Wade had some of his scent out when he took the buck.

He had a history with this buck too.

“I missed him last year,” he said. He knows it’s the same deer not just because of the wide rack but because of the distinct white hooves and white ring around the animal’s nose.

Wade shared how the miss came about.

“I looked at him too long,” he said. And he ended up getting a bit of the shakes when the moment of truth arrived. His set-up last year was on rolling pasture land and the buck got behind a terrace row.

“The deer was 60 yards away and all I could see was his rack,” Wade said. He's got one of those cell phone game cameras and it was sending him photos of the buck while all this was happening.

Wade finally got a shot when the buck was 180 yards away, but couldn’t connect.

Wade was set up a little different this year and he’d sprayed his doe pee on some nearby privet hedges. There were does in the field and with the scent of a doe in heat out and the rut getting kicking in Marshall County, the buck practically ran across the field, Wade said.

“You know how you see hunters whistle or grunt to stop a moving buck?” Wade said. “I was afraid to. I was afraid it would spook the does and if they took off, I’d never get a shot at the buck.”

Instead, he chose to shoot the buck on the move with his .308 rifle and connected. Another shot anchored the buck.

“It drops off pretty steep just off the field,” Wade said. “It’s not like Painted Bluff, but it’s steep. I didn’t want him getting off that bluff.”

The buck never left the field.

“I got married,” he said, “and my wife Leslie hunts and she has been keeping us in meat.”

The buck weighed 171 pounds field dressed, putting it well over 200 pounds on the hoof. Bob Davis – who cattle farms with Wade and is a fellow Grant firefighter with him – helped him load the big buck.

Wade got in the scent business in 2006 and now sells his Whitetail Rage product at 10 to 12 retailers around north Alabama. Local distributors include Carnes Ace Hardware in Grant, Keller’s Shell in Hebron and Feed Supply in Guntersville.

He gets the urine from a friend who has deer and there are 3 different products in the line, a doe “blend” with urine from several does, a single doe in estrous scent and a buck in rut scent.

Kalvin Click, a known Grant buck killer, was one of the early adapters of the scent.

“Wade gave me my first bottle of pee and told me to just try it,” Kalvin said. Kalvin was skeptical. He'd tried commercial scents without much luck. He said the problem with some deer pee attractants is they turn to ammonia before they get in a hunter's hands.

Urine is a tool just like a deer call or anything else. While Wade likes to spray the product on bushes or broomsedge, Kalvin makes mock scrapes on known deer trails with the scent.

He said he killed a buck with it on a trail on Anderson Ridge the second day he used it and he’s been using it ever since. He hunts both at the Gunter Mountain Hunting Club in Jackson County, a club made up of Grant men, and around Grant.

He killed his best buck that scored 159 using his scent and scrape technique last year.

Like other doe pee distributors, Wade’s operation almost got shut down a few years ago. When CWD (chronic wasting disease) first started being detected in deer herds in the Southeast, there was talk of not allowing the product.

But the Archery Trade Association (ATA) stepped in with a program that certified deer urine sources as being disease free.

A few years ago, Wade said, the ATA decided it was not going to be in that line of work any longer. But a new organization, the Responsible Hunting Scent Assn., stepped in to do the same certification work.

Wade, a water plant operator for North Marshall Utilities, works a 7 day on, 7 day off schedule, giving him time to service his vendors. He said he has just enjoyed the side business.

And now he has his own giant buck taken with his own product to boot.

The rut or whitetail breeding season is on in Marshall County from now until the end of the month. Story after story of big bucks on their feet looking for does are making their way back to us. If you can, get out and have fun. It's the best time of the year to take a nice buck.