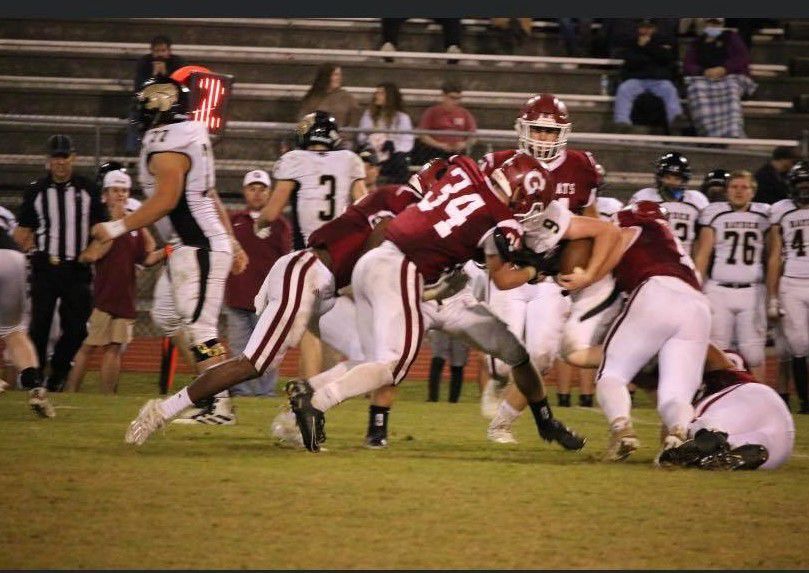 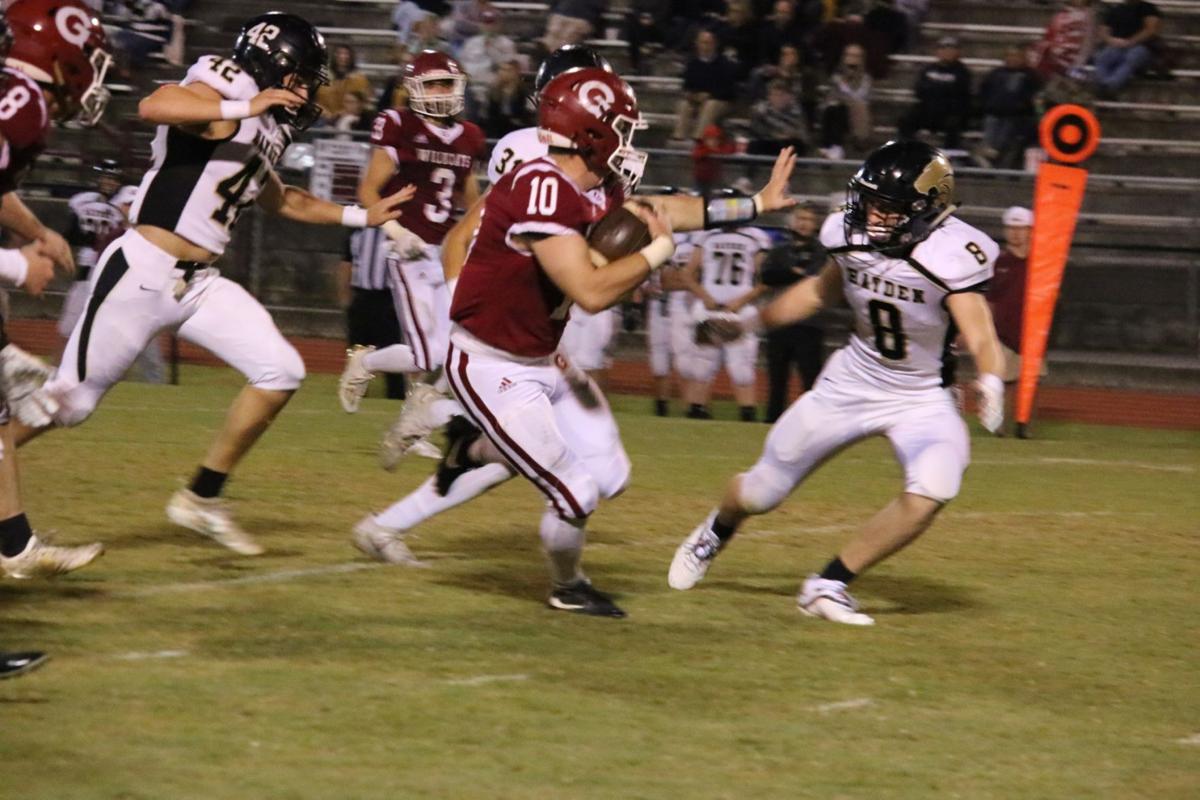 Logan Pate stiff arms a Hayden defender on his way to the endzone. 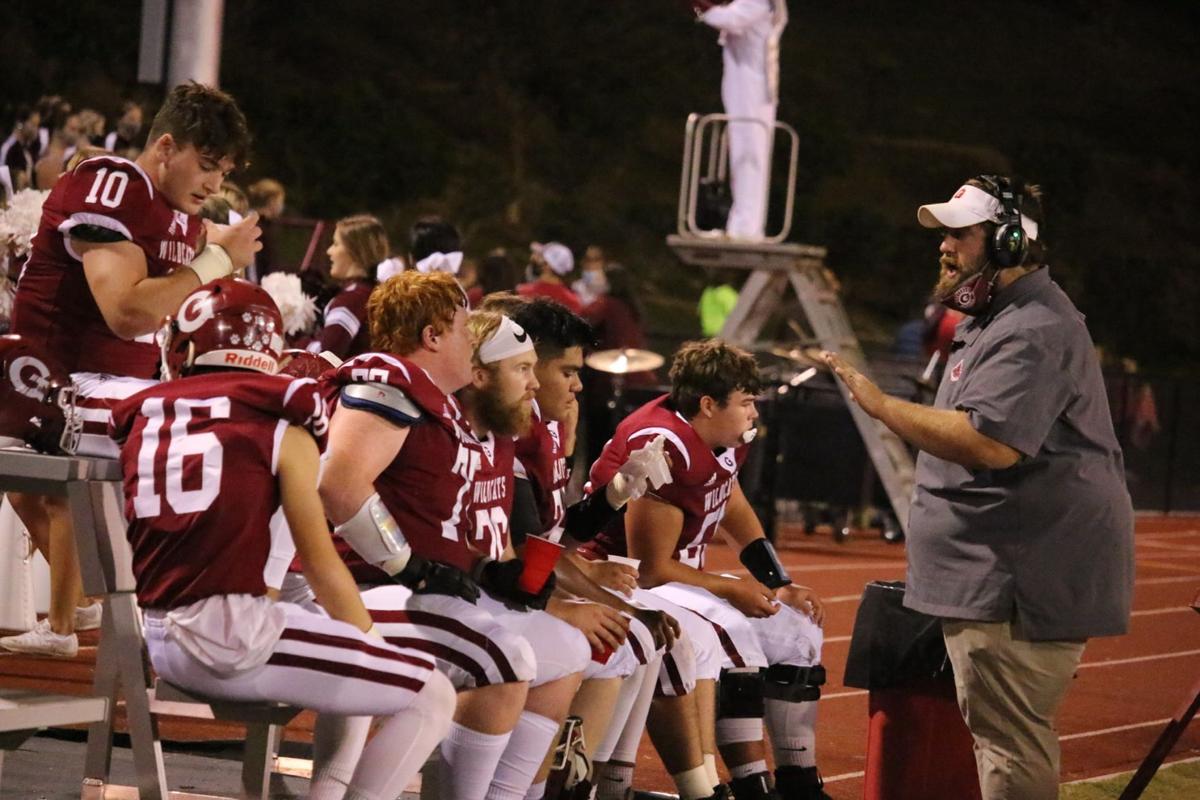 Guntersville coach Dustin Schofield talks with the offensive line during the Hayden game.

Logan Pate stiff arms a Hayden defender on his way to the endzone.

Guntersville coach Dustin Schofield talks with the offensive line during the Hayden game.

The AHSAA Class 5A football playoffs kicked off last week and after dominating Hayden 62-3, the Guntersville Wildcats moved on to the second round.

Guntersville entered the game with a 9-0 record as the No. 1 seed in Region 7. Hayden came into the first round with a 6-4 record and No. 4 seed from Region 6. The Wildcats from Blount County ran the Wing-T offense, which can be difficult to contain. Guntersville had little issue with it and didn’t meet much resistance from the Hayden defense.

Guntersville had five offensive possessions in the first half and scored on all of them. Quarterback Cole McCarty threw for 160 yards, completing 14 of 17 passes with three touchdowns in the game. Logan Pate had another strong night on the ground with 168 yards rushing and three touchdowns. McCarty also rushed for one touchdown and CJ Gomera also had a rushing touchdown.

Following the Hayden game, Pate increased his rushing yardage to 1,555 and 23 touchdowns. As a team up until last night's game against Pleasant Grove, Guntersville had rushed for 2,398 yards. Gomera was second in rushing with 298 yards and McCarty was 3rd at 275 yards on the ground.

The Wildcats were once again dominate on defense as they forced two turnovers. Davidson picked off a Hayden pass late in the first quarter and returned it for a 61-yard touchdown. Williamson also had a fumble recovery and 10 tackles.

Up to the Pleasant Grove game, Williamson had 85 tackles and one interception, which was returned for a touchdown. Ben Biddle was second in tackles with 58, Miller Kutner had 44, Mackenley Hampton 35 and Jordan Griffin 34.5. Davidson and Fussell lead the team in interceptions with five apiece.

“Playing your first-round playoff game at home is always a good thing,” Guntersville head coach Lace Reese said after the Hayden game. “Playing another week of high school football is a great thing. I thought we played really well defensively. Hayden’s offense is tough to defend and I thought we handled it well. We struggled a little to get the passing game going early but Logan ran the ball well.”

Guntersville’s all-time playoff record improved to 19-30 with the win over Hayden. The Wildcats turned their attention to one of the top teams in the state last night – the Pleasant Grove Spartans.

Reese spoke about the challenge Pleasant Grove presented after the Hayden game.

“We are excited to be playing at home in the second round of the playoffs,” he said. “Pleasant Grove is the most talented team we have faced this season. They have great speed at all of the skill positions and good size on the offensive and defensive lines. They went to the finals last year and they return many of their top players from that team. We are going to keep the focus on us this week. We will continue to do the things that have brought us success this year. You cannot have turnovers or mistakes in the kicking game against a dangerous team like Pleasant Grove. On defense we have to tackle well and eliminate giving up the big plays."