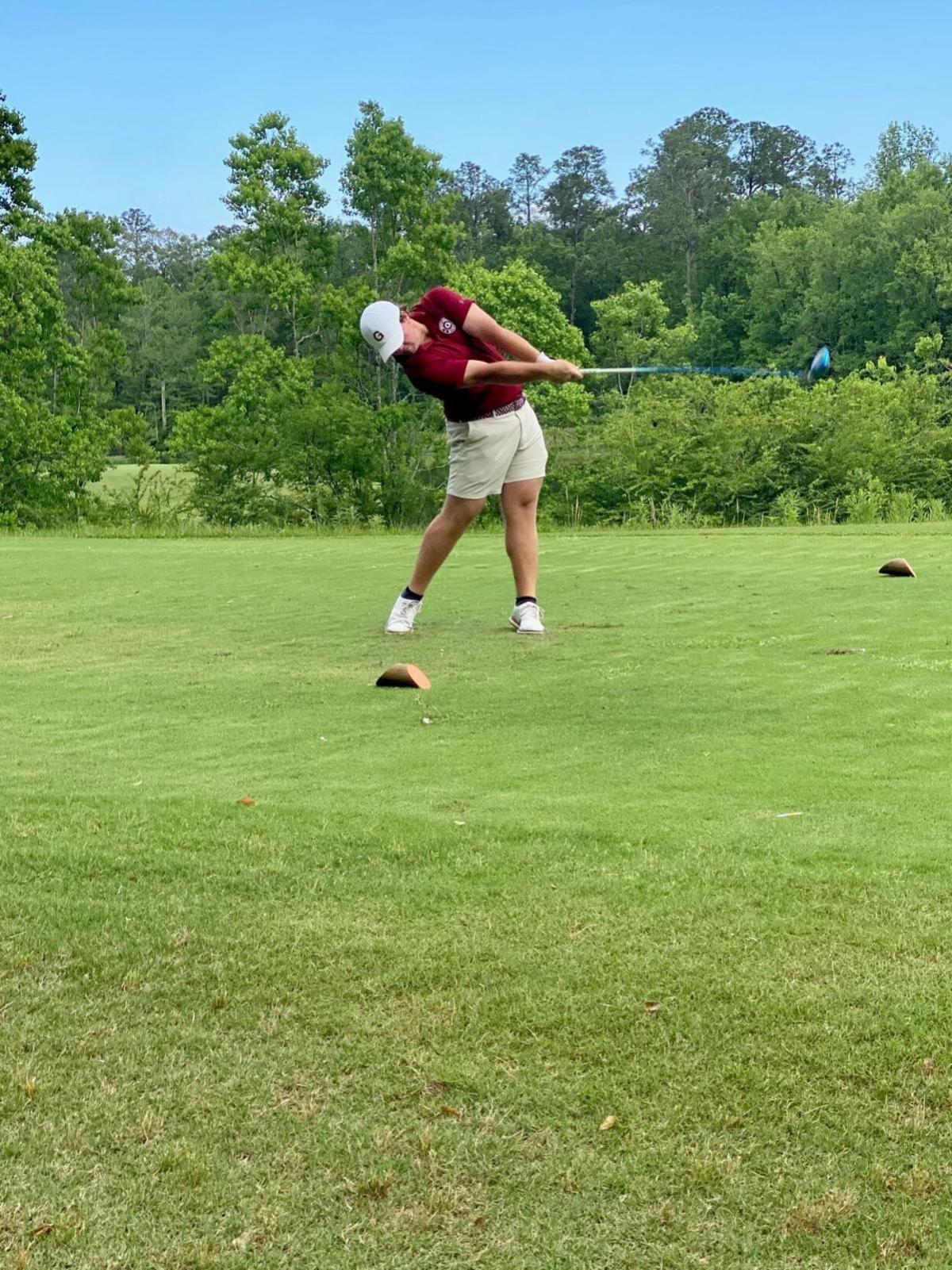 Paul Bruce shot a 68 in the state tournament at Magnolia Grove Golf Club in Mobile on Monday. He and the Wildcats brought home the 2021 Class 5A state championship. 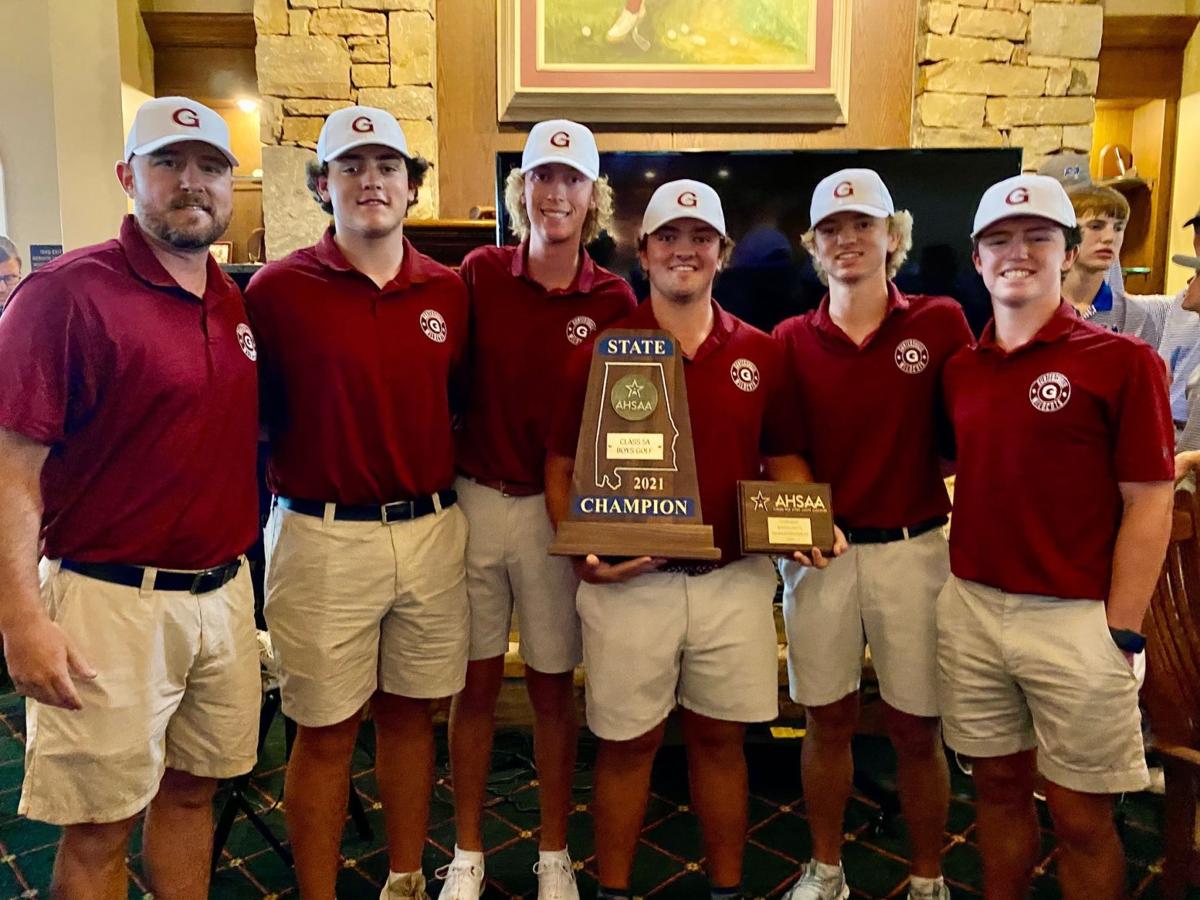 The Guntersville High golf team won the 5A state championship Tuesday in Mobile. It had been a goal for the UAB-bound team captain Paul Bruce, center.

Paul Bruce shot a 68 in the state tournament at Magnolia Grove Golf Club in Mobile on Monday. He and the Wildcats brought home the 2021 Class 5A state championship.

The Guntersville High golf team won the 5A state championship Tuesday in Mobile. It had been a goal for the UAB-bound team captain Paul Bruce, center.

The Guntersville varsity boys golf team has done nothing but fill up the trophy case throughout the 2021 season.

On Tuesday, the Wildcats won the 2021 Class 5A state championship after defeating UMS-Wright 294-303 in Mobile at Magnolia Grove Golf Club.

Guntersville traveled to Mobile this past Monday and Tuesday to compete against UMS-Wright, Boaz and Rehobeth. Rainy weather shortened the tournament from 36 holes to 18 holes. The teams never made it onto the course Tuesday due to rain and Guntersville was named champion with a nine-stroke lead.

“Conditions weren’t great by any means when we got down to Mobile,” Landers said. “By state rules, all you need to get in is nine holes to declare a champion. At times we didn’t know if that would happen. Getting delayed like that on both days and still performing well really speaks to the mental toughness of this team.”

The state championship squad consists of Paul Bruce, John Bruce, Reagan Lefeve, Jac Conway and Brett Barwick. Paul Bruce shot a 68 through 18 holes and John Bruce shot a 70. The two brothers have been consistent at the No. 1 and 2 positions all year for Guntersville.

“John and Paul have been great all year long and led us very well in each match,” Landers said. “But Reagan, Brett and Jac played very well in the state meet. You can’t win a state championship if your No. 3, 4 and 5 don’t play well. Those guys definitely played a great round and were a big reason we came home with the trophy.”

This is the second time Guntersville has hoisted the state championship trophy in golf. The first time was in 2013 in Class 4A. Landers said missing last season due to the pandemic added some extra incentive to finish this season strong.

“This is a really good group of guys and I really will miss this team being together,” he said. “Last season when everything got shut down, I told them to start preparing themselves mentally and physically for this season. They committed and all had the same goal of playing to their highest potential.”

Paul Bruce and Jac Conway are the two seniors on this year’s squad. Neither will be easy to replace. Conway has been a steady contributor for the team and Paul has not only been the best player on the team all year, but arguably the best player in Class 5A all year. Paul will continue his golf career after high school at UAB.

“This was my ultimate goal for a very long time,” Paul said of winning state. “Honestly, it hasn’t really sank in yet. I have enjoyed playing with this group of guys so much this year. I feel like we connected really well and got better all season long.”

Paul feels like the preparation on the days leading up to the state meet had the biggest effect on the team.

“We got pretty familiar with the course on Friday, Saturday and Sunday,” he said. “I think doing that and using the experience that John, Reagan and I have in state meets really helped. This was my fourth state meet to play in and the second for John and Reagan.”

He added, “I feel like we played great as team. Reagan, Jac and Brett had to play well for us to win it all and they did. I’m just really proud to be a part of this group.”

Landers concluded, “I just can’t describe how proud I am of this team. These guys were determined and focused and represented Guntersville very well. It feels great to be bringing the blue map back to Guntersville.”