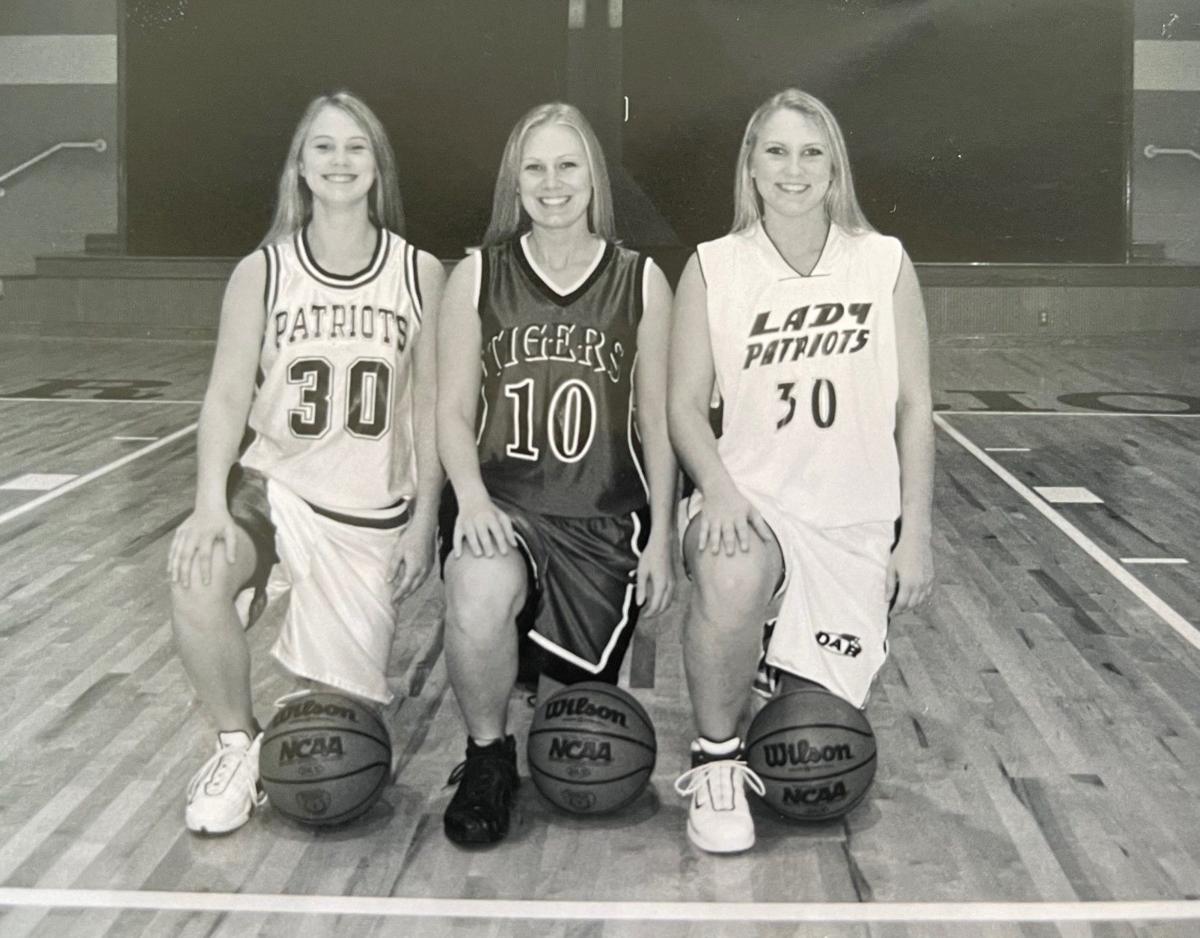 Bridget Largen (center, in her West Alabama uniform) is shown with her sisters Autumn (left) and Brooke (right). All were key starters for DAR in an incredibly successful run. Bridget is being inducted into the Marshall County Sports Hall of Fame. 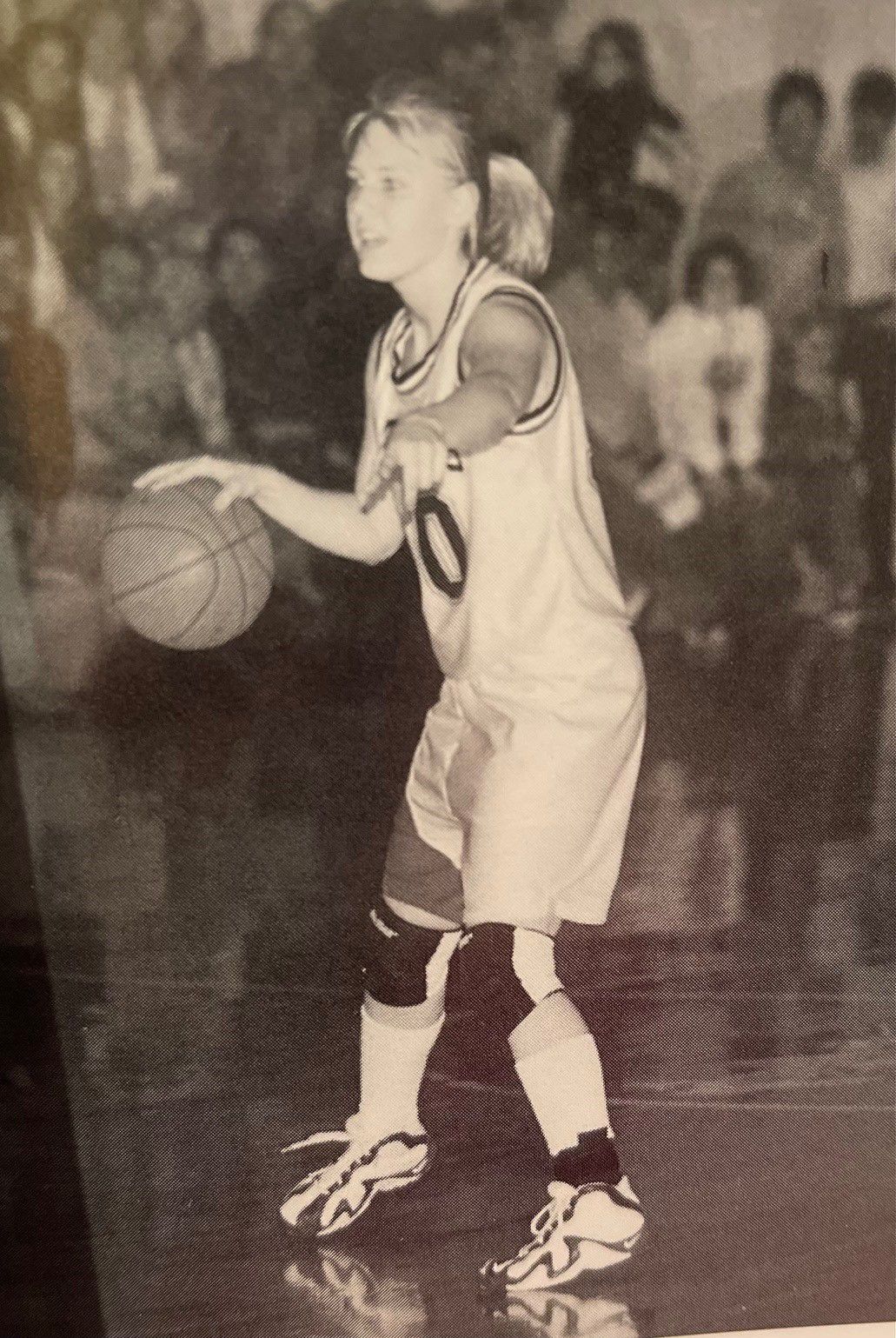 Bridget is shown in action. 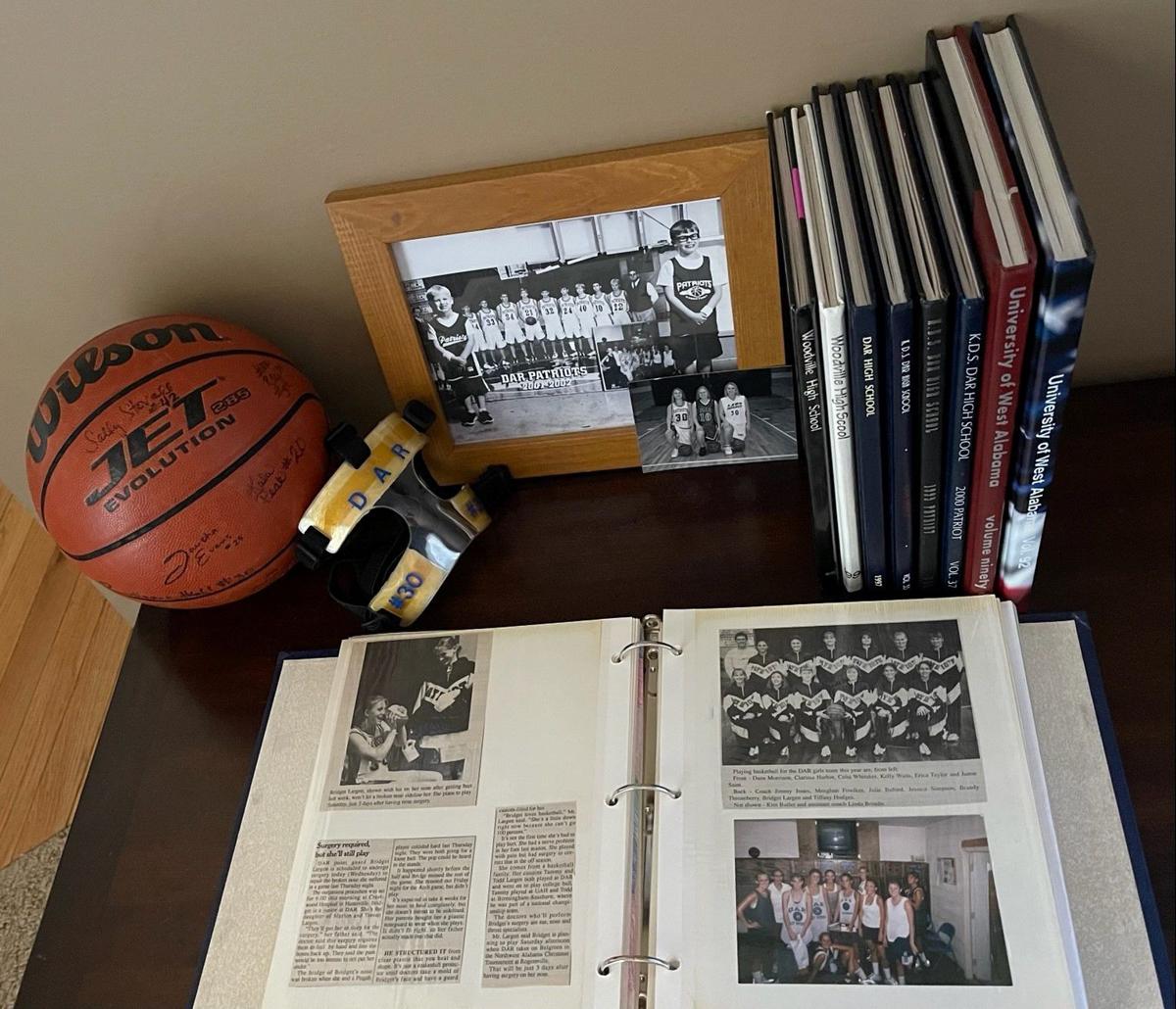 Bridget still has all her memorabilia from her playing career. That's the story of her broken nose in the scrapbook, with the noseguard her father fashioned for her afterwards just above it. 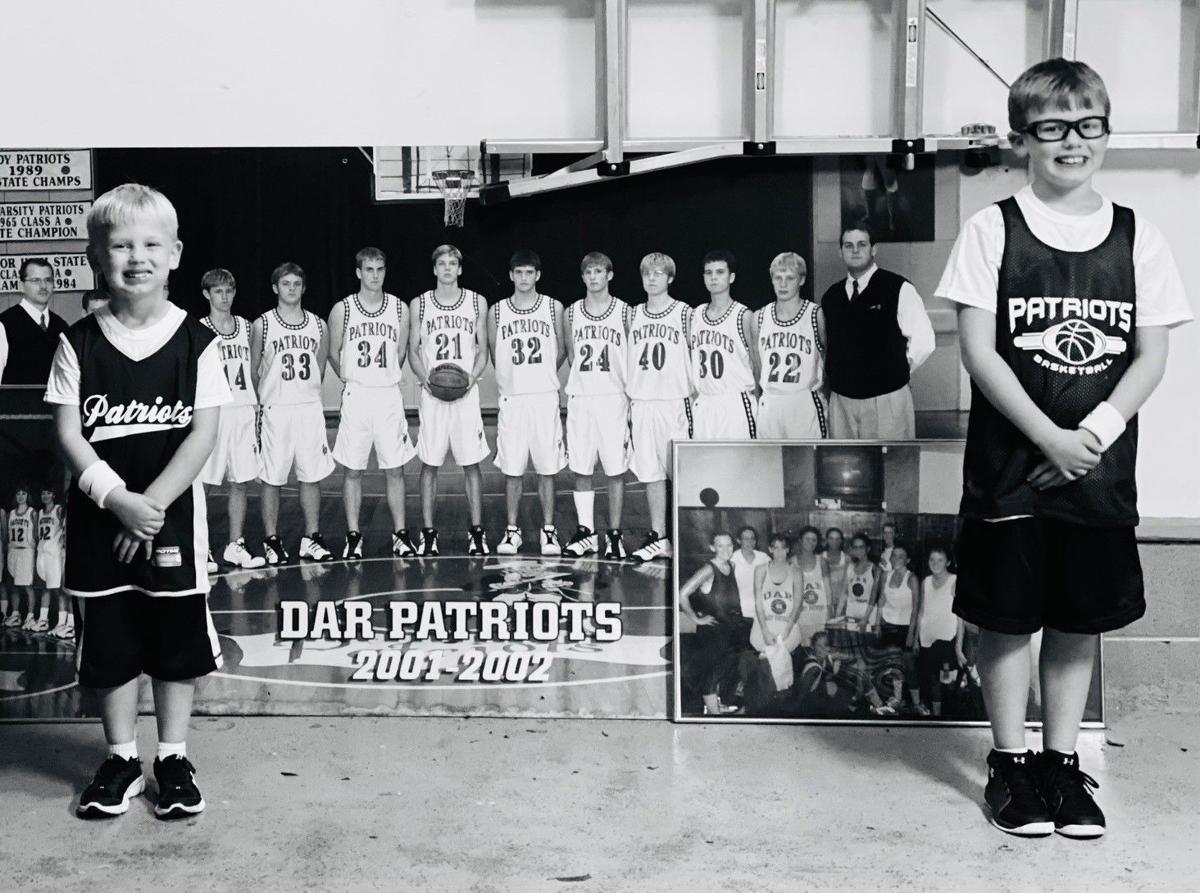 Bridget's sons, likely future Patriots themselves, are shown with some of her memorabilia. The boys are Sawyer and Dallas.

Bridget Largen (center, in her West Alabama uniform) is shown with her sisters Autumn (left) and Brooke (right). All were key starters for DAR in an incredibly successful run. Bridget is being inducted into the Marshall County Sports Hall of Fame.

Bridget is shown in action.

Bridget still has all her memorabilia from her playing career. That's the story of her broken nose in the scrapbook, with the noseguard her father fashioned for her afterwards just above it.

Bridget's sons, likely future Patriots themselves, are shown with some of her memorabilia. The boys are Sawyer and Dallas.

Bridget Largen Moorefield is among the eight people who will be inducted into the Marshall County Sports Hall of Fame in 2022. It is a deserving honor no doubt.

Bridget was the first of the 3 Largen sisters who all proved to be standout basketball players for DAR. Autumn and Brooke would follow her. Bridget graduated in 2000 and then played two years at the University of West Alabama.

As much as anything, gritty toughness and a sense of confidence marked Bridget’s career. Her former coach, Jimmy Jones, shared a couple of stories that demonstrate it and Bridget confirmed that the stories were true.

Bridget broke her nose not once but twice during her 4-year career with the Lady Patriots. The second time, DAR was at Guntersville and – as Coach Jones said – “Guntersville was pretty good that year.” With point guard Bridget on the bench, the team watched as a 10 or 12 point lead evaporated to just 3 or 4 points.

The trainers couldn’t get the bleeding stopped and they’d stuffed big wads of gauze in Bridget’s nose. The ends of the gauze were hanging out. She was a sight.

“Guntersville cut it to 3 or 4 and Bridget came to me and said, ‘Send me in, Coach. I’m ready,’” Coach Jones said.

He told her she was hurt and she needed to sit back down.

“She said, ‘No, I’m serious. Send me in. Guntersville is not beating us tonight,’” Coach Jones said.

He sent her in and Guntersville did not beat them that night.

“I was really careful not to get any blood on my jersey,” Bridget recalled. “The refs wouldn’t let you play if you had blood on your jersey. I also remember Julie Buford laughing at me because of the way that gauze in my nose looked.”

Both times she had the broken nose, she played afterwards with a nose guard. It wasn’t something you could find at an average medical supply house.

“My daddy made it,” Bridget said.

Her parents are Merlon and Tenien Largen. Merlon was as eat up with DAR basketball as anyone who ever lived. Merlon and Ben coached the younger Grant girls for years, prepping them for their high school careers. Ben still coaches younger boys at Grant.

You could say Bridget was born to play basketball.

“I was a tomboy from the get-go,” she said. “I didn’t play with Barbie dolls. The shows I watched as a little girl were McGyver, Karate Kid and Rambo. Daddy taught us to be tough.”

The broken nose was not the first time she played hurt. As a freshman, she had a neuroma – a bubble on a nerve – in her foot. She played the entire season with it and had surgery to fix it in the summer.

“You just dealt with pain,” Bridget said. “You had to play.”

During Bridget’s time at DAR, the Lady Patriots had a running rivalry with Pisgah. It was serious, as one of the teams would often end up in the state tournament.

It came about that DAR was playing Pisgah in the area tournament. “I was worried,” Coach Jones said. “I guess you could tell it.”

Bridget could see the concern on his face.

In the hall at school that day, she walked up to the coach, gave him an elbow said “Don’t worry about this, coach. We’ve got this.”

Bridget admits today she didn’t really know they were going to win that night.

“I knew we were going to play hard,” she said. “But I could see he was stressed and I just wanted to help.”

Bridget and the Patriots went to the Final 4 state tournament her senior year. After high school, she played at West Alabama two seasons.

“The coach called me and thanked me for having her in such great shape,” Coach Jones said. “She got down to West Alabama and some of the freshmen were just gassed. She was running with the upper classmen.”

“Coach Jones had been involved in track before he coached basketball,” Bridget explained. “He told us a female athlete only had to sit around 4 or 5 days to be out of shape and that always stuck with me.”

Her career ended two years too soon. She developed a blood disorder where her platelet level was too low. It caused her to be fatigued and she would bruise easily at the slightest bump. She and her doctors decided it was time for her to call it quits.

She came home and finished her degree at Athens State and worked as a program analyst on Redstone Arsenal for 16 years before becoming a full-time stay-at-home mom in 2018.

She and her husband Lucas Moorefield have two sons, Dallas, 9, and Sawyer, 5. The boys know bits and pieces about their mother’s storied athletic career. They’ve learned a little more as she has gotten out some scrapbooks and memorabilia as she gets ready for her Hall of Fame induction in June.

The boys are showing some interest in basketball and they could end up playing rec ball for Ben Sivley, starting the circle all over again.

Bridget was ecstatic when Miranda Keller McCoy was inducted in the 2020/21 Hall of Fame class.

“Miranda was a senior when I was a freshman and she took me in like a little sister,” Bridget said. “My husband mentioned when Miranda was inducted that it could be me one day. I shook my head no, no and said there were far too many better players.”

When Jimmy Bradshaw, the Grant Councilman who is also part of the Hall of Fame Board, called to tell Bridget she’d been inducted, she thought he was playing a prank.

“He likes to play jokes and cut up at church,” she said. “He said, ‘No, I’m serious,’ and I started crying. To this day, it’s really hard for me to believe.”

We asked Bridget – and Coach Jones too – the really unanswerable question. Which of the Largen sisters, as good as they all were, was the best player.

“It could be any one of us,” Bridget said. “It’s kind of hard to compare. I played point. Brooke played post. Autumn played a little bit of both.”

Bridget still shoots a little some with the boys. Her husband is a deacon at the church and the family sometimes plays a little in the church gym. They also have a goal at home.

“I loved it with all of my heart and it was sad when it ended,” Bridget said of her basketball career. “But I bit my lip and took it. I knew the good Lord had a plan for me.”