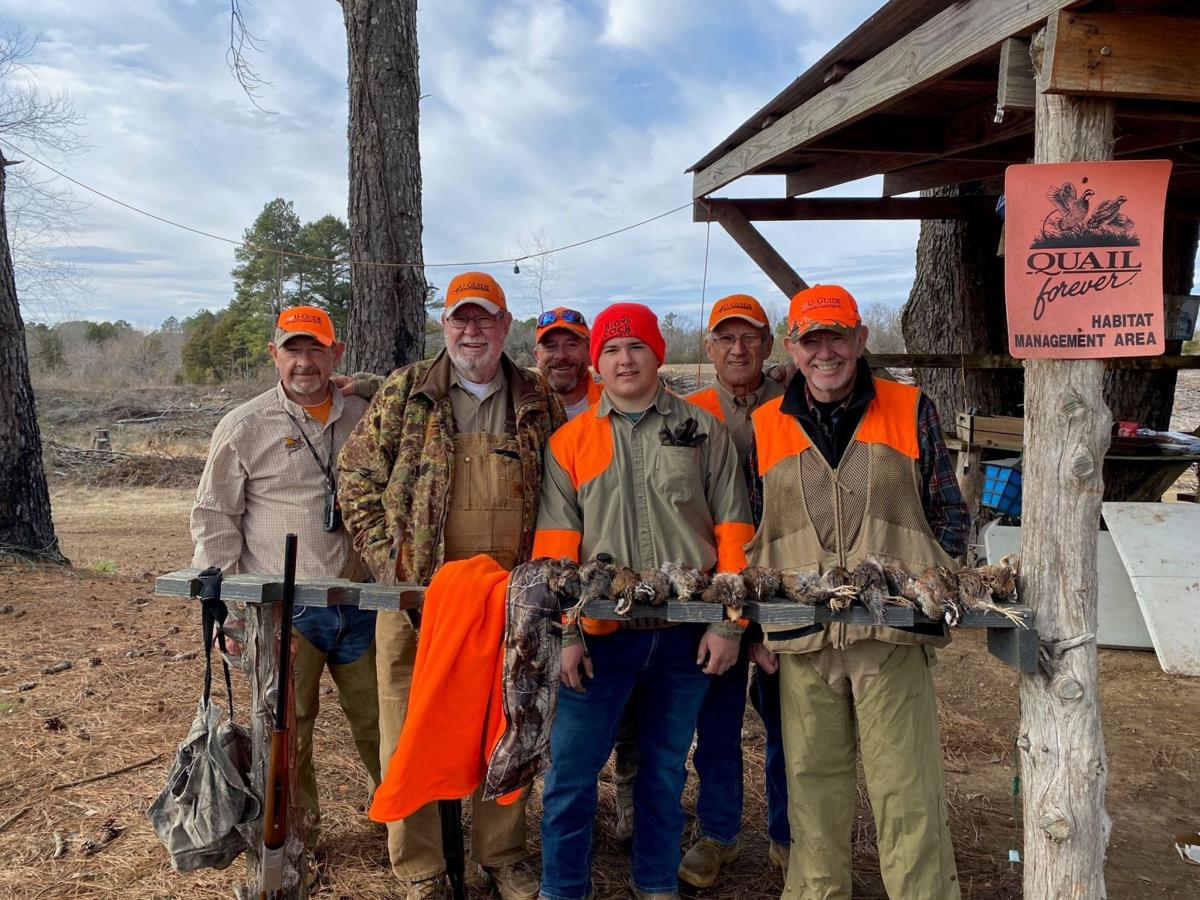 The Sparks family is shown with a pile of quail taken on Mitch Sparks' farm in northern Mississippi. From left are, front, Mitch Sparks, Joe Sparks, Will Sparks and Pete Sparks. The men in back you might call "honorary Sparkses." They are Donnie and Bill Mayfield. 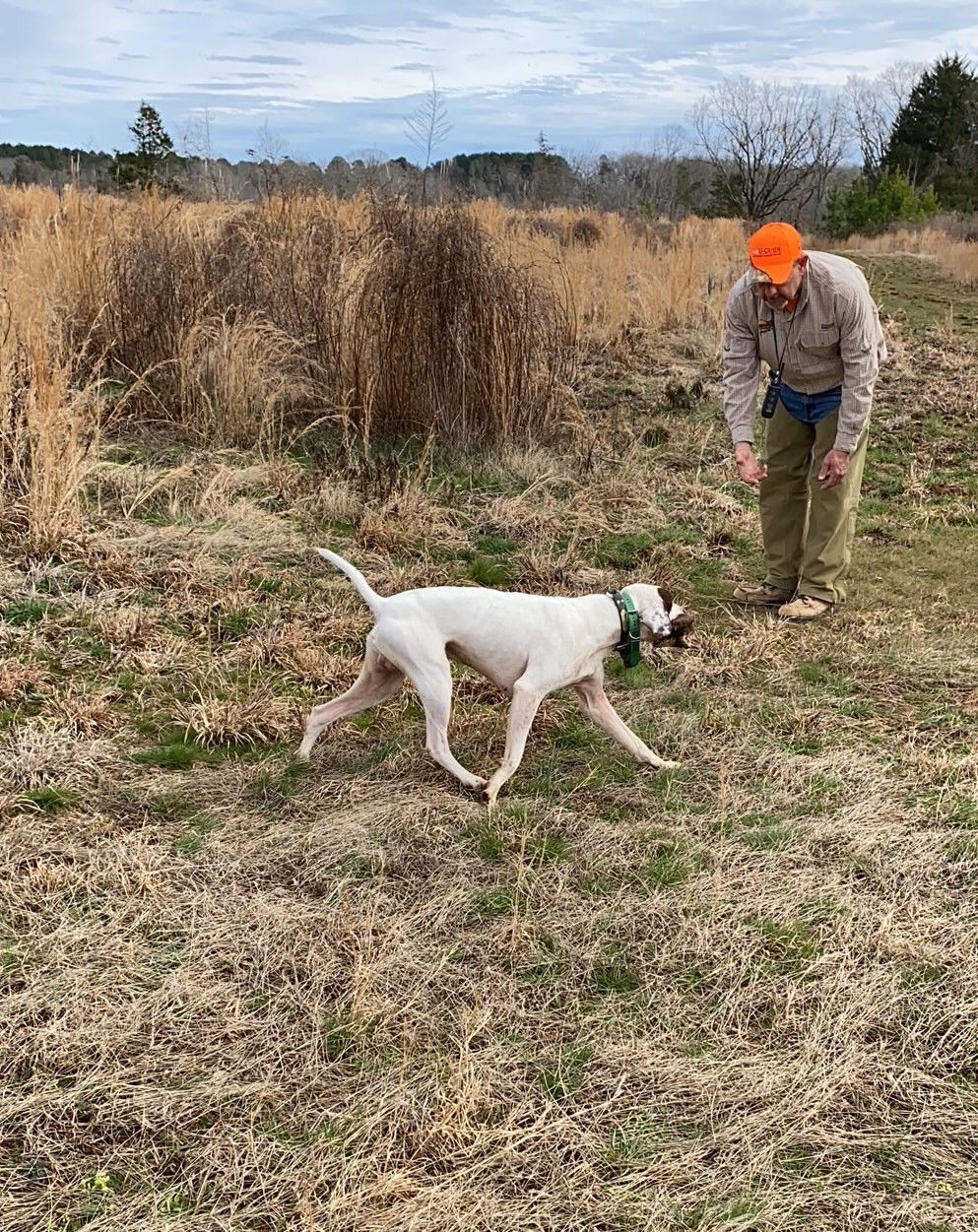 Mitch Sparks prepares to take a bird from his big pointer. 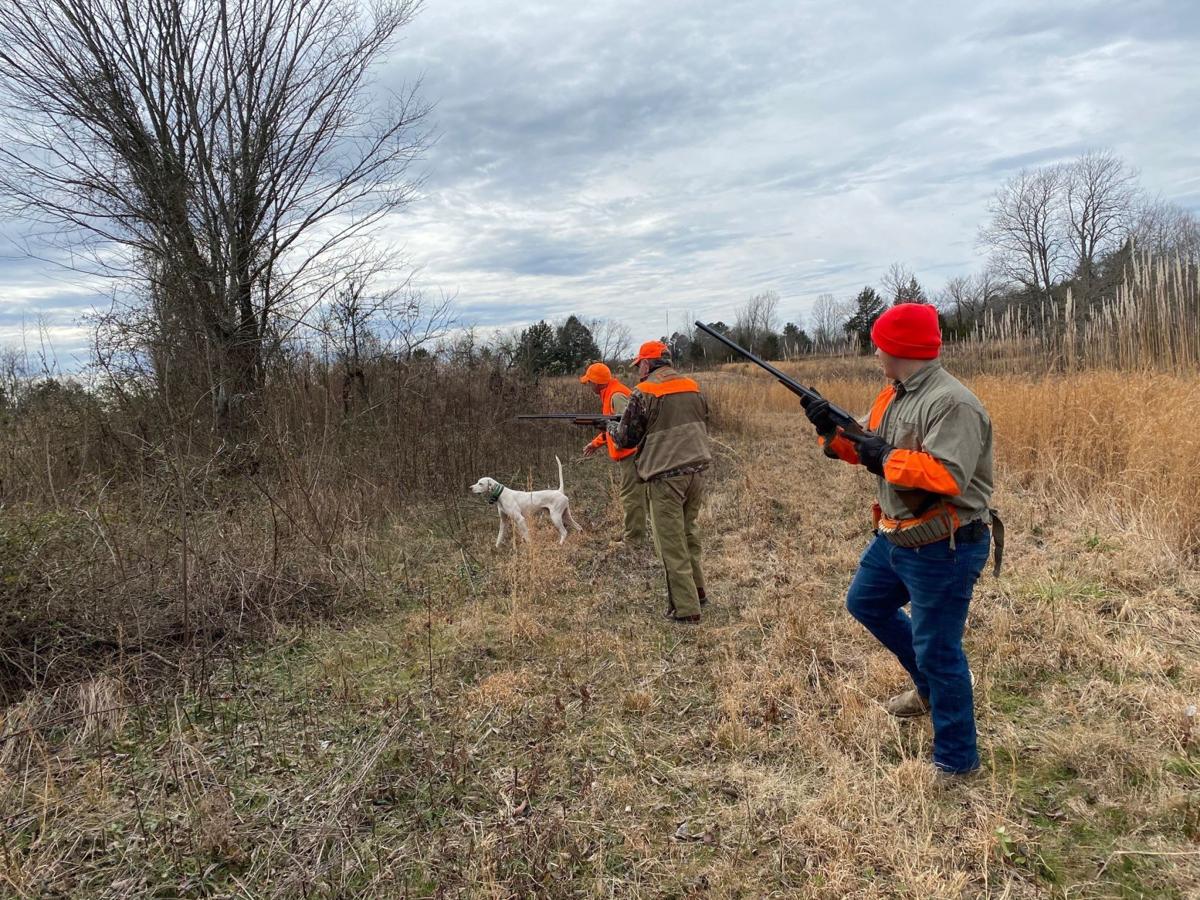 Will Sparks, Pete Sparks and Mitch Sparks get ready for a covey rise behind Mitch's pointer, Bear.

The Sparks family is shown with a pile of quail taken on Mitch Sparks' farm in northern Mississippi. From left are, front, Mitch Sparks, Joe Sparks, Will Sparks and Pete Sparks. The men in back you might call "honorary Sparkses." They are Donnie and Bill Mayfield.

Mitch Sparks prepares to take a bird from his big pointer.

Will Sparks, Pete Sparks and Mitch Sparks get ready for a covey rise behind Mitch's pointer, Bear.

Native bobwhite quail populations, once widespread across the South, are all but a memory these days. But a small band of brothers who love the sport keep it alive by releasing pen-raised quail for put-and-take hunting.

I’d been on some of these hunts in the past, but it had been a very long time. When Dr. Pete Sparks asked if I’d like to accompany him on a family quail hunt, I jumped at the opportunity.

I knew we’d have a good time, but it turned out to be way more fun that I expected even though “rusty” doesn’t begin to describe my wingshooting skills.

Pete comes from a bird-hunting family. His brother Joe loves it, as does his nephew Mitch and great nephew Will. And Joe and Mitch’s best friends, another father-son duo Bill and Donnie Mayfield, might as well be family.

Joe and Mitch live in the Memphis, Tennesee, area. A number of years ago, Mitch bought a farm in Ashland, Mississippi, strictly as a place for outdoor recreation. It’s a little piece of paradise if you’re a bird hunter.

Mitch keeps the place in brush and broom sedge, with lanes mowed through it. It’s classic bird habitat.

They have a dove field to hunt in September and a pond for fishing in the spring. The guys and their friends get busy with duck hunting at their club in Arkansas after dove season. The first week of November every year, they travel to Kansas to hunt quail. Then in the first week of December, they go to South Dakota to hunt pheasants. They’re hunting birds of some kind just about every weekend fall and winter.

When duck season winds up in January, they turn their attention back to the Mississippi farm and quail, with a rabbit hunt occasionally interspersed.

These guys are close-knit. They hunt together a lot.

I noticed nearly every one of them had a pistol on a hip when I got out of the truck and I knew immediately that I was going to like them.

They’d just met me, but they treated me like a long-lost cousin. And just like groups of guys do to one another everywhere, they rag each other pretty hard.

Our hunt started with Mitch and Donnie riding out in a Polaris Ranger to “plant” the birds. One bird got away from them and sailed right back towards the sheds where we’d gathered up. It perched on a limb of a pine tree. Pete grabbed his shotgun and meant to dispatch that one before it got away. But the end cap of his Browning wasn’t tightened all the way down and the gun wouldn’t go off.

Joe’s grandson, 15-year-old Will, proceeded to pull his Glock 34 longslide and dispatch the quail with 9mm. I quickly dubbed the feat “the shot of the day.” It was impressive. Quail are not large birds and this one was some distance away.

Will, a starter on the offensive and defensive line of his high school football team even though is is only a sophomore, would continue to impress with his shooting skills all day. The kid didn’t miss.

Our hunt soon started hunting behind Mitch and Donnie’s awesome dogs, a pointer named Bear (the class of the dogs), a Brittany named Tyson and Donnie’s small Brittany named Aubie. (Donnie has the unfortunate distinction of being an Auburn man in a group full of Alabama men.) Mitch was the chief guide and bird dog handler and it was clear he’d handled those duties many times.

Don’t feel too sorry for the birds. Even though they were pen-raised, they were strong fliers, among the best the men said they’d seen in a long time.

Over the course of the day, 50 birds were put out. I’d asked Pete on the ride over how many he thought we’d kill.

These birds acted right. Some of them would even run on the ground like wild quail to evade the dogs. It wasn’t exactly shooting fish in a barrel.

We hunted 25 birds in the first round, enjoyed a lunch of grilled bratwurst, then hunted 25 more.

At the end of the day, there was pecan pie. A toddy or two might have been consumed.

I’ve been out of the bird hunting world awhile as I’ve hunted mainly deer and turkey the last several years. Those affairs are kind of solitary, even when you’re hunting with someone else. Bird hunting with these guys is like a party centered around hunting. It made me want to do more of it. I came home and started researching briar chaps and shotguns on the Internet.

It also struck me that anyone with a little land and the patience to raise and train a dog could do this on their own place, invite a few friends and have a ball.

At the end of the day, as we were gathering up to tell stories and eat pie, something bumped me on the shoulder. I turned to look and came face-to-face with Aubie. Donnie had picked up the dog and was whispering in its ear to lick me on the face. It made me feel like one of their regular crew.

The jesting among the members of this happy band can be a little course, as you might imagine.

“Will, do you tell your buddies about all the stuff that goes on hunting with these guys?” I asked.