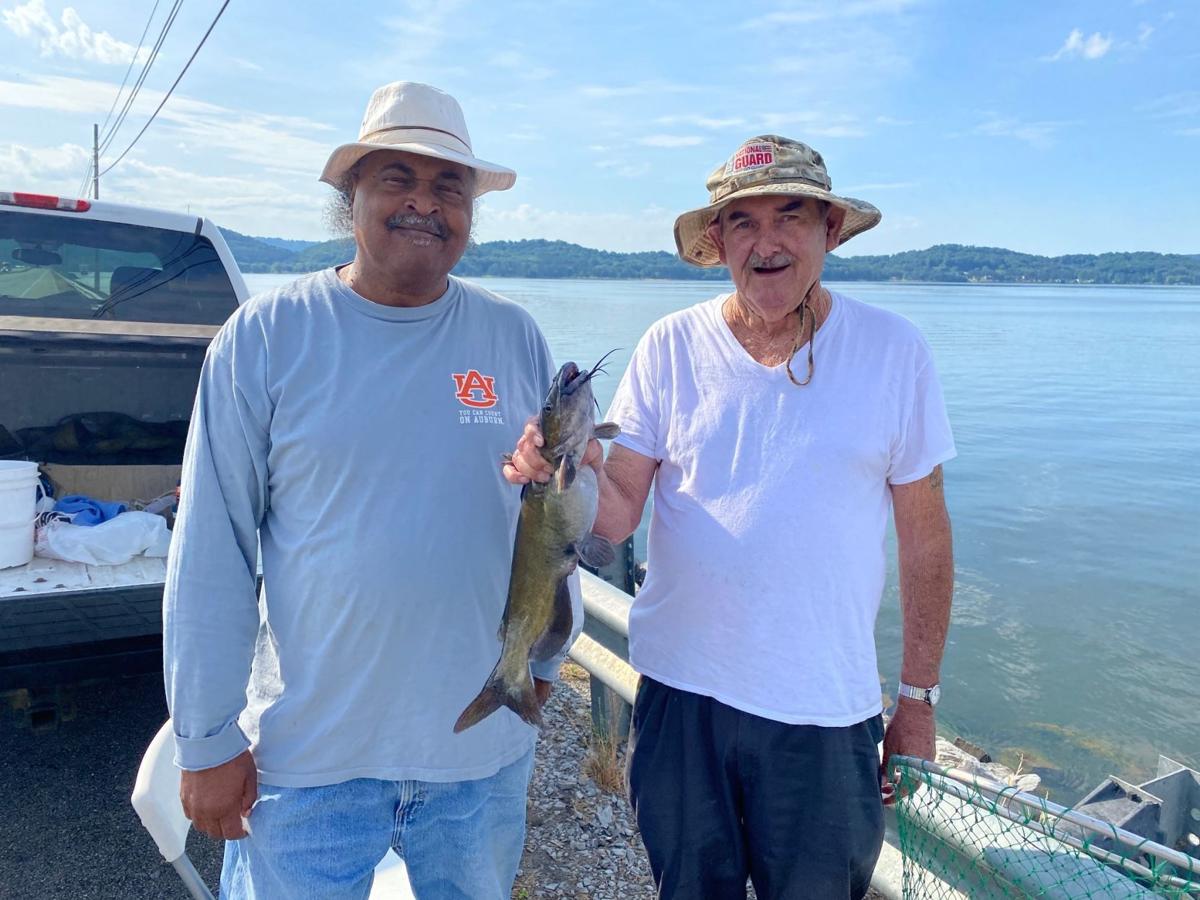 Samuel Herron (left) and Ronnie Waldon show off a catfish caught from the guardrail on the Warrenton Causeway. The friends fish 3 or 4 times a week in that area. 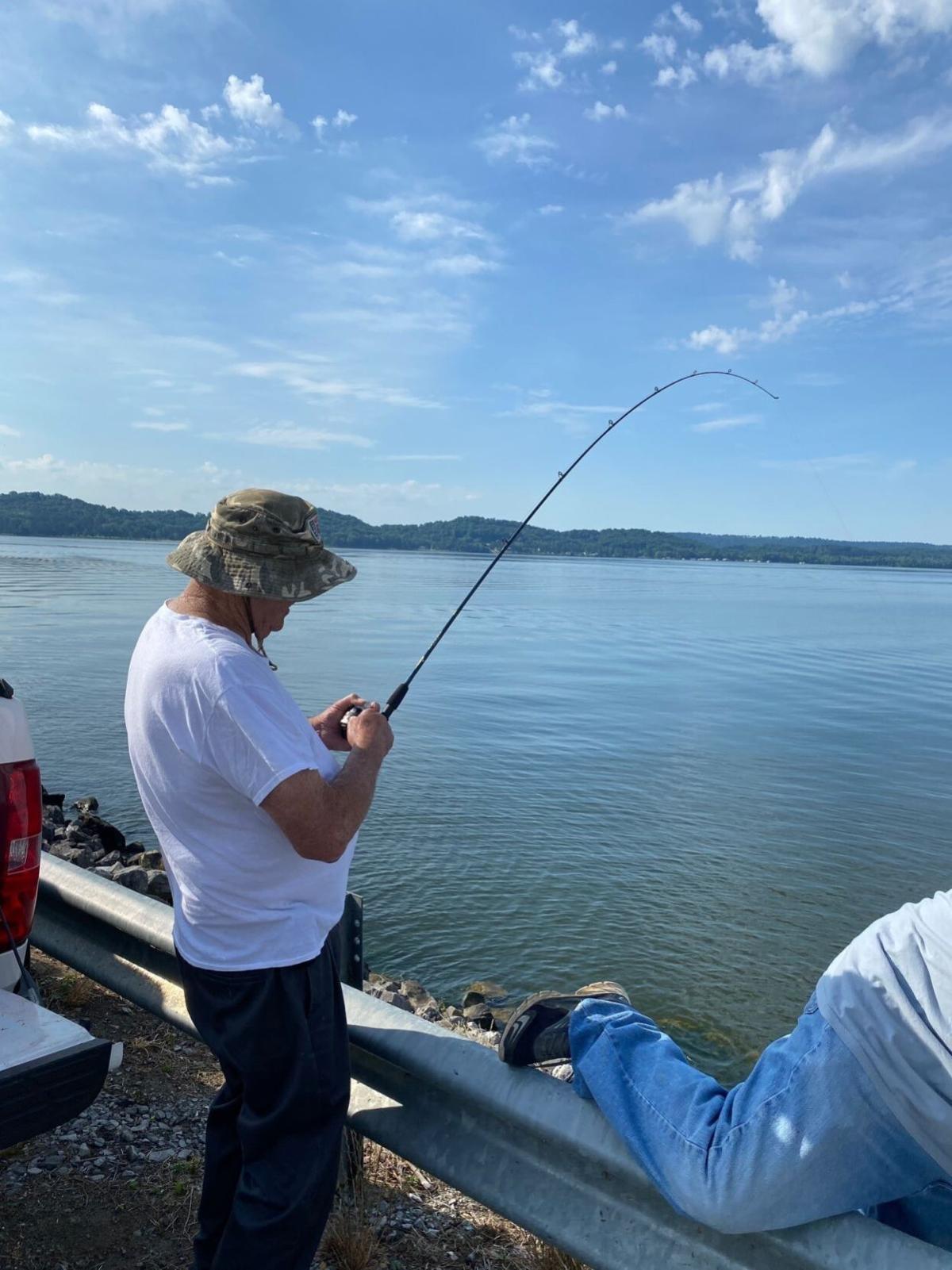 Ronnie fights a fish as Samuel heads over the rail to net it. 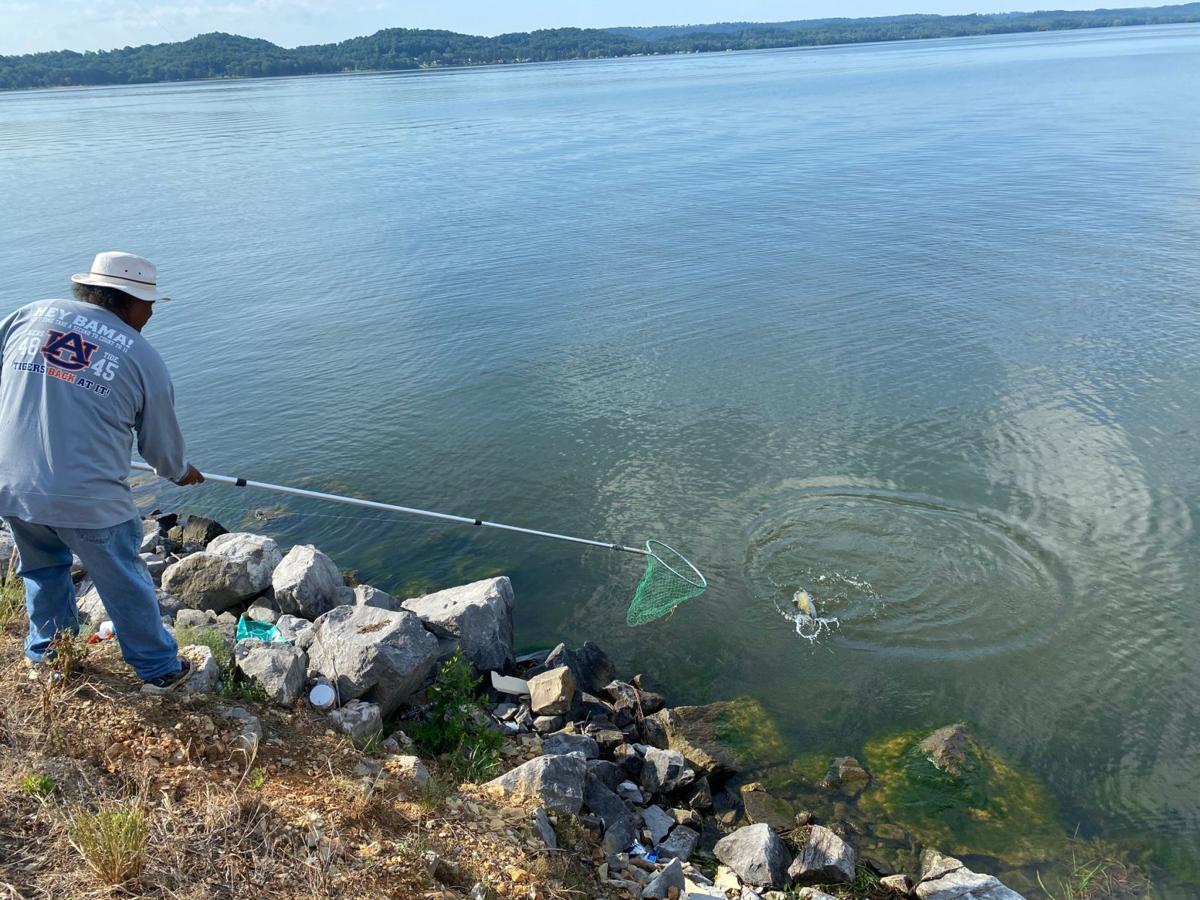 A painter's extension pole has been added to their dip net so they don't have to scramble down the rocks to land a fish. 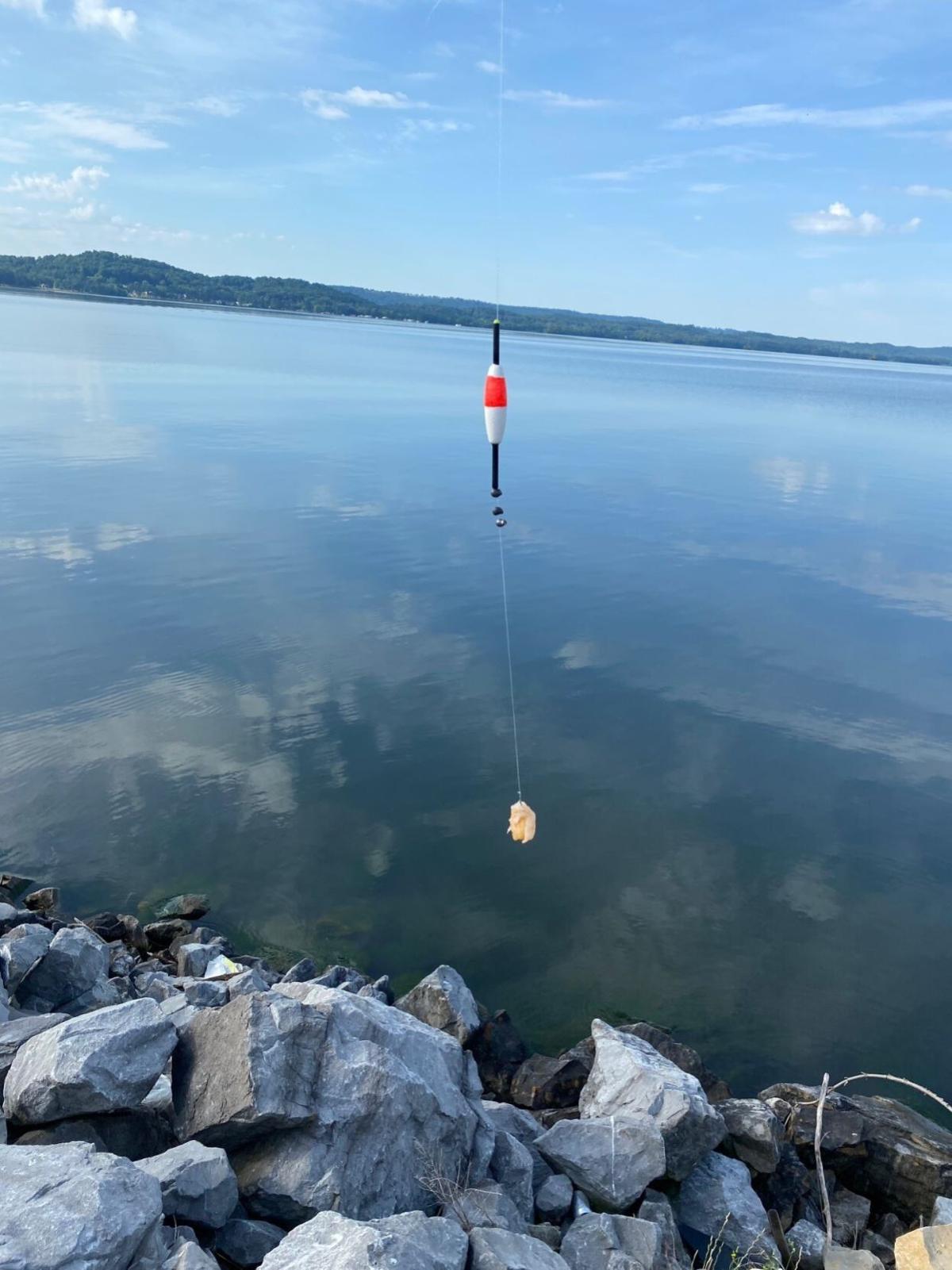 The slip float is almost a forgotten rig, but that's how Samuel likes to fish. 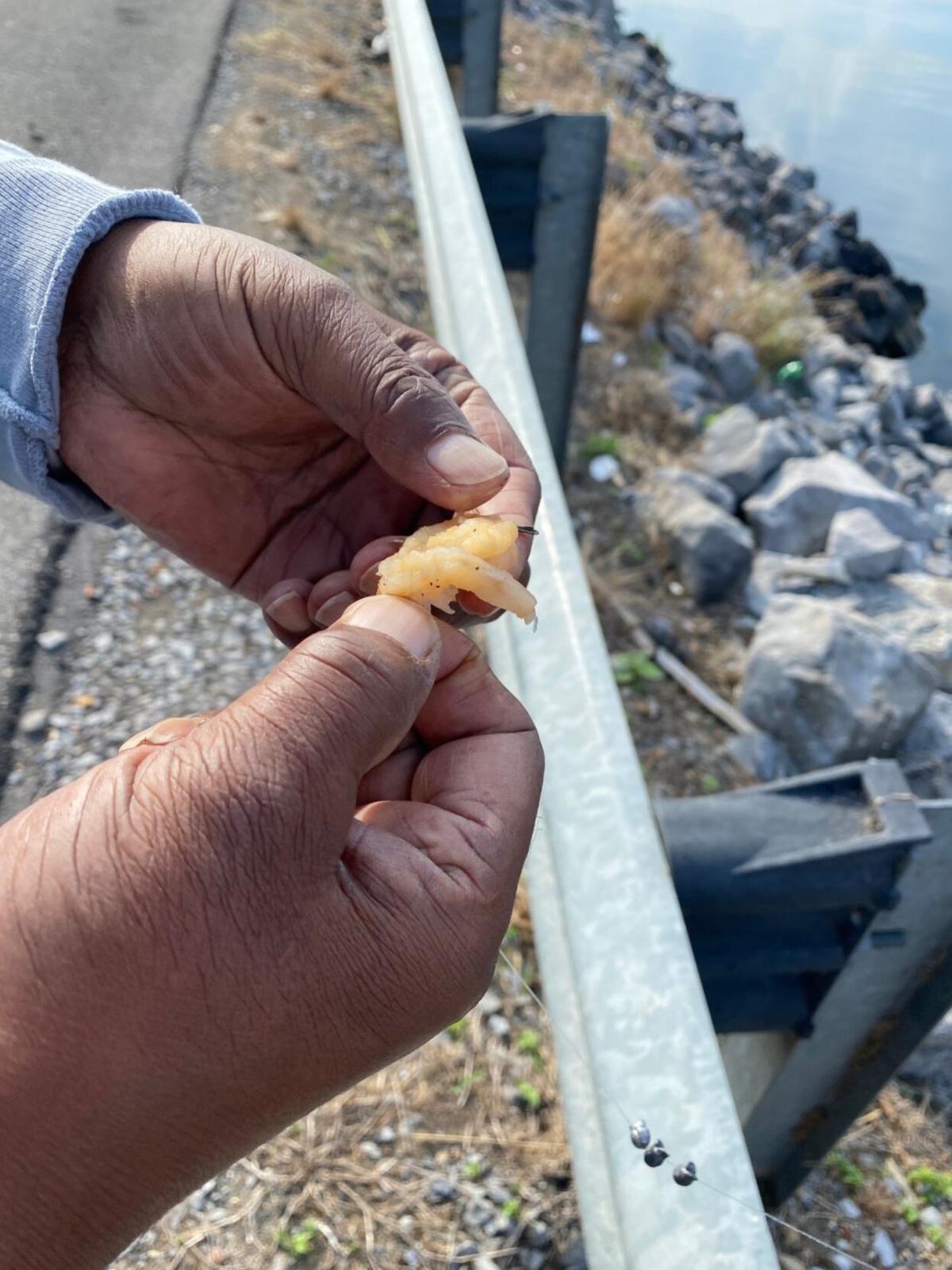 Samuel prefers to fish with shrimp. You might bite one of his shrimp too. He seasons them with garlic, onion powder, paprika and more. "Catfish love garlic," Samuel said.

Samuel Herron (left) and Ronnie Waldon show off a catfish caught from the guardrail on the Warrenton Causeway. The friends fish 3 or 4 times a week in that area.

Ronnie fights a fish as Samuel heads over the rail to net it.

A painter's extension pole has been added to their dip net so they don't have to scramble down the rocks to land a fish.

The slip float is almost a forgotten rig, but that's how Samuel likes to fish.

Samuel prefers to fish with shrimp. You might bite one of his shrimp too. He seasons them with garlic, onion powder, paprika and more. "Catfish love garlic," Samuel said.

If you drive across the Warrenton Causeway much, you’ve seen them – fishermen set up right on the roadside fishing from the guardrail.

It can be pretty good fishing, they say, but not as good as some other places they once had access to. Samuel Herron and Ronnie Waldon of Boaz are two fishermen who fish there. It’s a specialized kind of fishing, but it’s pretty laid back too.

Ronnie was fishing with chicken livers with a light weight that kept his bait on the bottom. Samuel likes to fish with a slip float.

“Not many guys today know about a slip float anymore,” he said. “The beauty of it is that you can fish it in 10 feet of water or 100 feet of water. The secret is the small knot above your float.”

That knot determines the depth the bait goes below the float. You can buy commercial “bobber stops” but Samuel said it is really an unnecessary piece of equipment.

“You can tie a knot with a little piece of monofilament that does the same thing,” he said.

The men differ a bit in their bait choices too. Ronnie was fishing with chicken livers the morning we visited. Samuel was using shrimp. But they weren’t just any old shrimp.

“I like to go to the store and get the shrimp,” he said. “Then I get them home and add garlic seasoning. Catfish love garlic. I’ll add garlic, onion, paprika, maybe one or two other seasonings.”

Both men caught catfish the day we were there, so both baits work.

Samuel was using a medium size rod, not what you really think of when you think of a big, stout catfish rod.

The big monster size catfish aren’t they ones they’re after. They like 2 to 6 pounders, eating size cats. Ronnie keeps them and eats them or he gives them to others who might need a mess of fish.

“I guess I’ve been catfishing for 50 years,” Samuel said. “I used to come here when I lived in Gadsden, but I met my wife and now we live in Boaz.”

The men like to fish 3 or 4 times a week. They don’t fish if it’s real windy or the weather is otherwise bad.

“We don’t come down here on holidays,” Samuel said. “We don’t want to be around a bunch of drunks.”

May might the best month of all to fish for catfish along the riprap. It’s the spawning season.

“You can see the females up making a place to spawn,” Samuel said. “Sometimes they will have scars on their heads from banging into the rocks.”

The men enjoy fishing for crappie and bluegill too, but it’s clear catfish are their favorite pursuit.

One parks his car in front, the other in back. In between is almost like a temporary little fishing camp with their gear and a couple of chairs.

Ronnie was fishing two rods, one near his chair he could get his hands on quickly. The other was upright with a bungee cord holding it to the bumper of his truck. That bungee cord might be a critical piece of equipment.

“We were down fishing below Guntersville High School with some other guys the other day,” Samuel said. “This one guy had several rods set out against the rail. One tip started bouncing. Then the rod took off across the rail and hit the water. You could see it going across the top of the water for a little ways.”

While we were standing there talking, the line on Ronnie’s rod went slack.

“He’s getting a bite,” Samuel said.

The catfish came in with the bait and took it. Ronnie unfastened the bungee card while the line was slack. Then it tightened up again. Ronnie had the rod in his hands as it tightened.

“The fish has got it,” Samuel said.

With a sweeping hookset, Ronnie jacked the fish and stuck it.

At this point, the niftiest and most specialized part of the duo’s gear came into play. Ronnie has affixed a painter’s extendable pole to his dip net. Rather than have to clamber down onto the dangerous riprap, the net will reach from the guardrail to the water.

Ronnie went over the rail to get a little closer to the water, deployed the long-handled dip net and scooped his friend’s fish. It took way longer for you to read this paragraph than it did for that to actually happen. It was that quick.

“Ronnie likes to get at least 4 if he’s going to clean them and that’s 3 this morning,” Samuel said. They also had a big bluegill in their bucket as “bycatch” and Ronnie had caught a large turtle of all things that was released.

While the men enjoy fishing the guardrail, it’s not their favorite fishing spot.

“This spot is kind of dangerous with all the traffic,” Samuel said. “We really liked fishing at the harbor, where the new building is being built. We fished all up and down that point for years. We caught hundreds of fish.”

“We would have caught 150 or 200 already this year if we could still fish that,” Ronnie added.