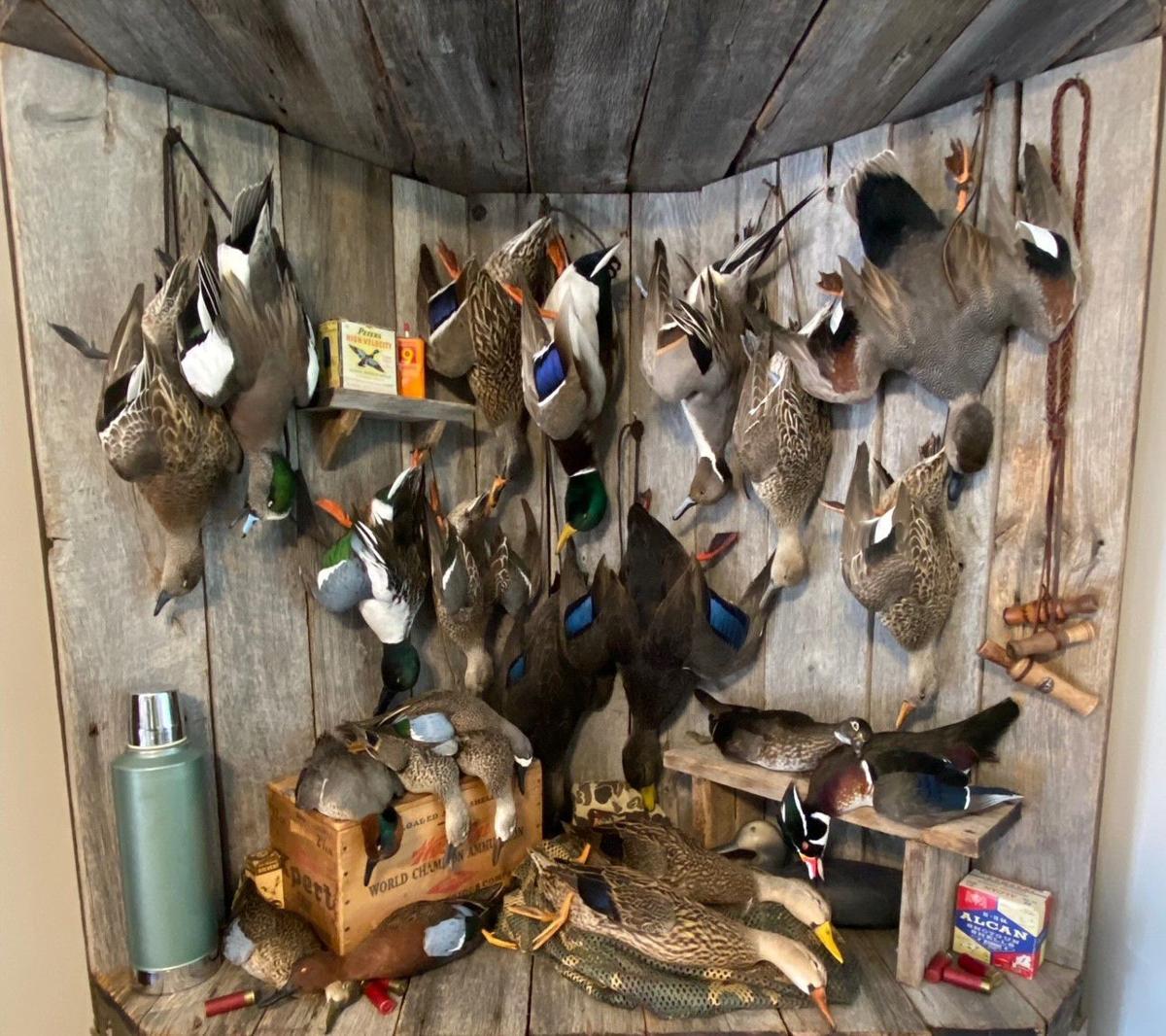 Matt's dabblers are all in a "dead game" mount in a corner cabinet in his home. He built the cabinet himself and it includes some important family mementos, his father's thermos and granddad's cap for instance. 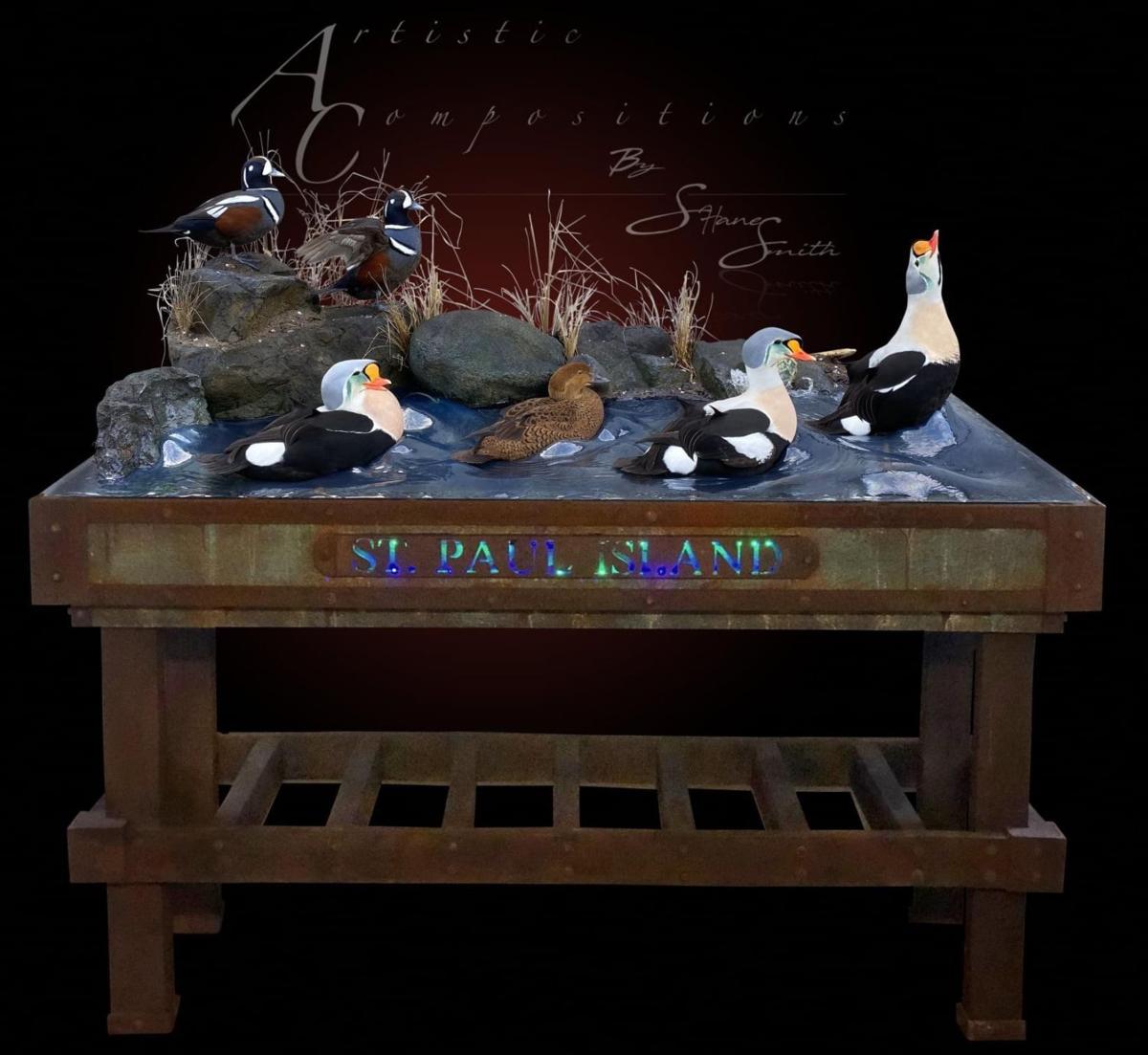 This is a display of Matt's eider from Alaska. 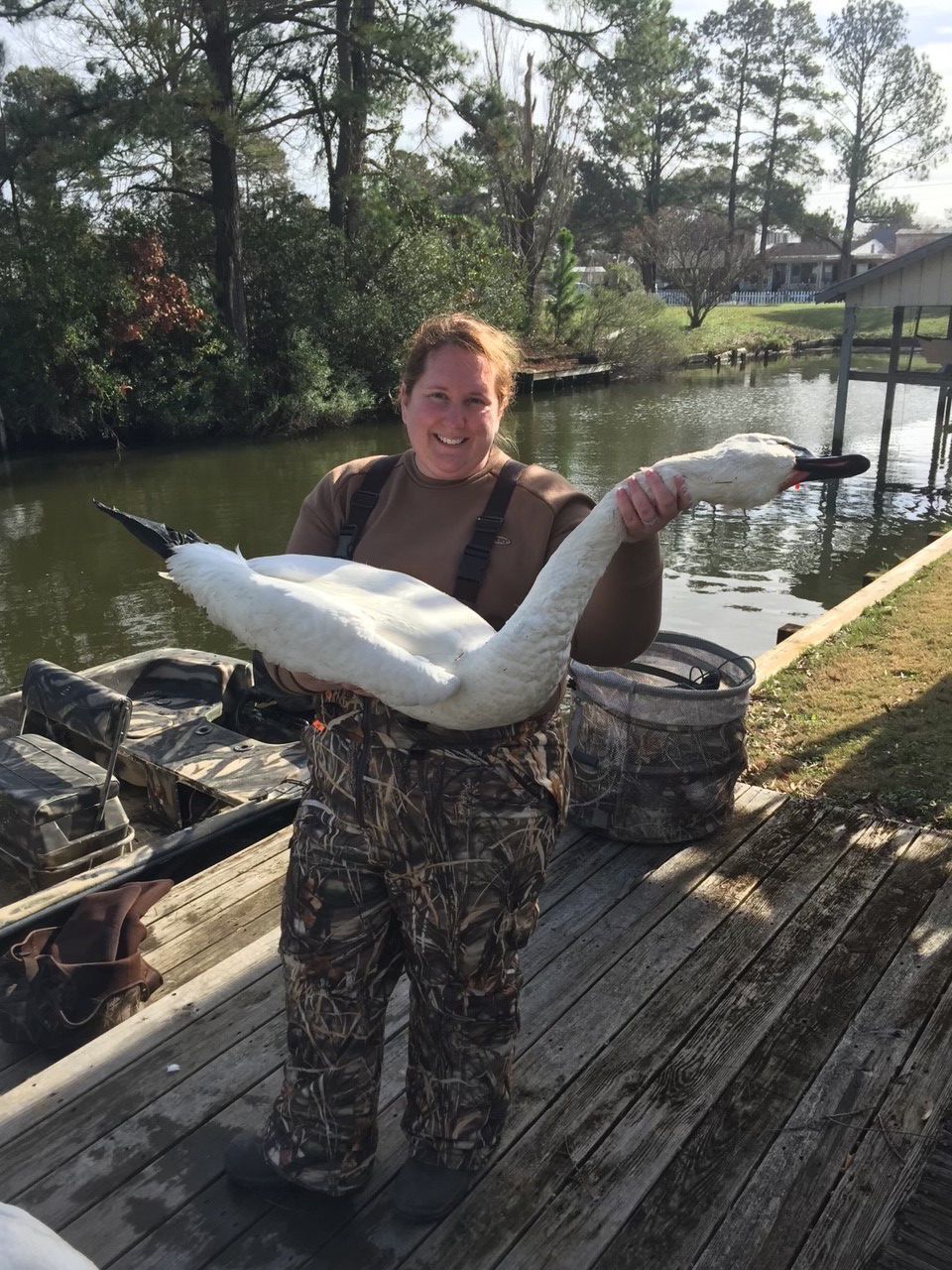 Rachel Masters hunts with her husband sometimes and she got this giant tundra swan in North Carolina. 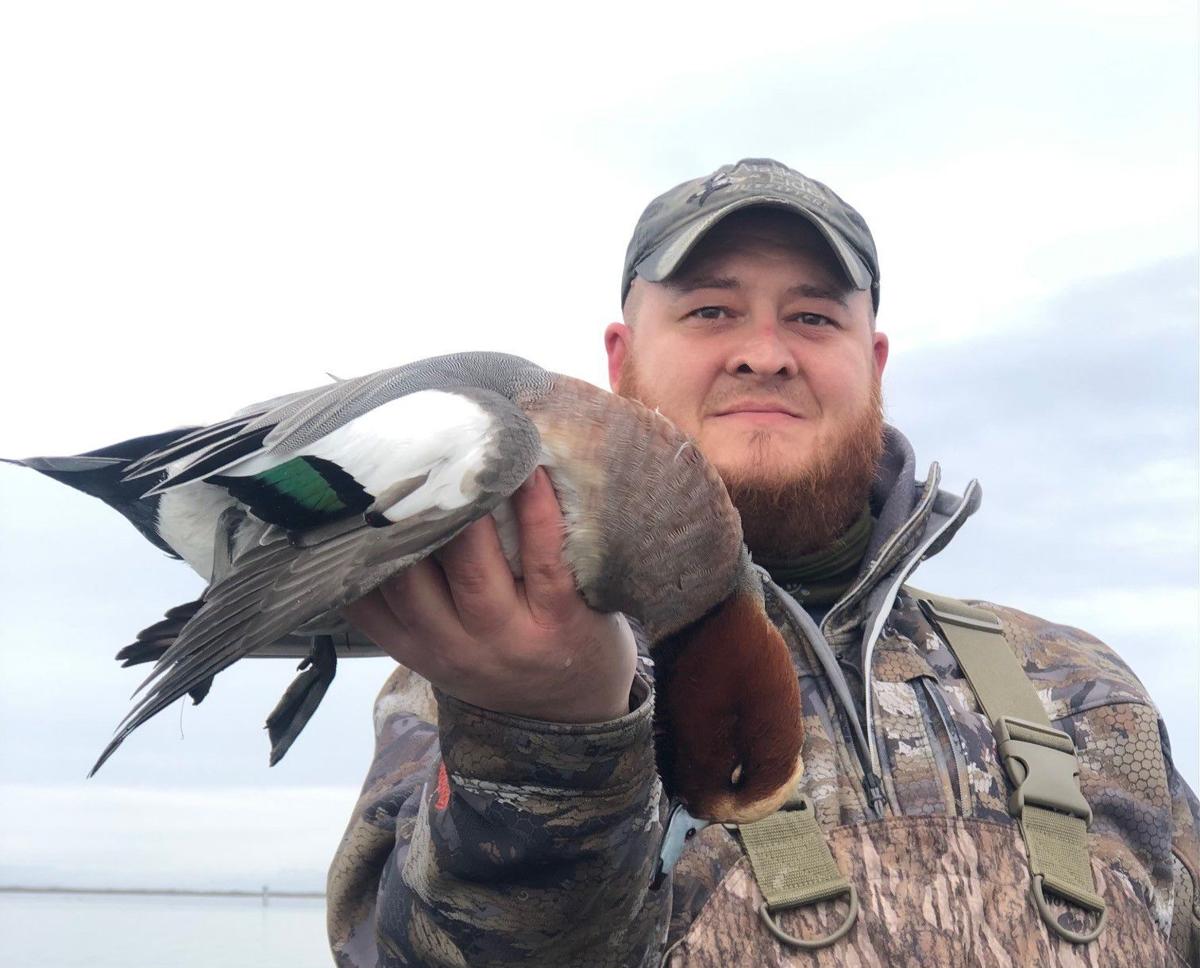 A Eurasian widgeon was one of Matt's prizes this year. 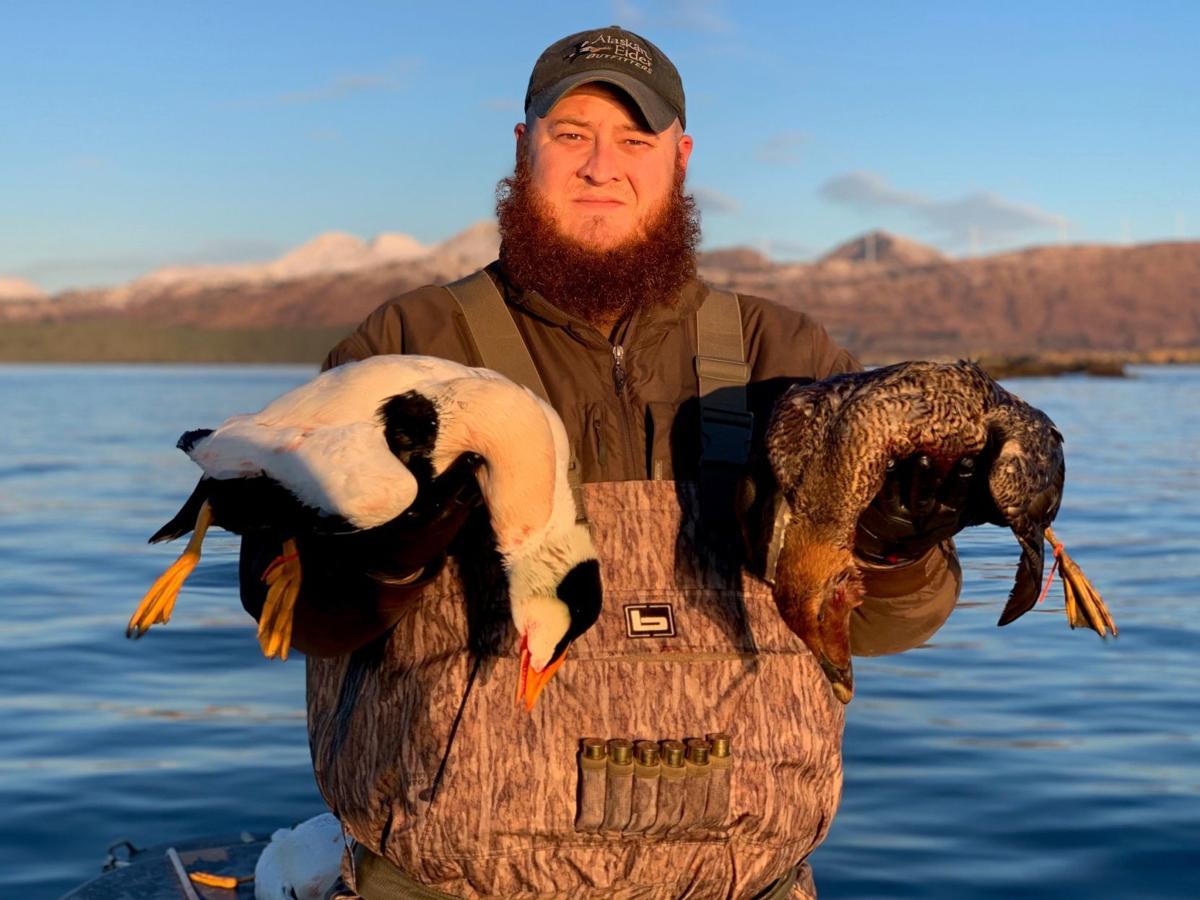 Matt is shown with some of his sea ducks taken in Alaska.

Matt's dabblers are all in a "dead game" mount in a corner cabinet in his home. He built the cabinet himself and it includes some important family mementos, his father's thermos and granddad's cap for instance.

This is a display of Matt's eider from Alaska.

Rachel Masters hunts with her husband sometimes and she got this giant tundra swan in North Carolina.

A Eurasian widgeon was one of Matt's prizes this year.

Matt is shown with some of his sea ducks taken in Alaska.

There are 41 species of waterfowl in North America.

Matt Masters of Guntersville has killed 46.

How is that possible, you might ask? There are also a number of subspecies and now he’s started on those. A list of what he has taken accompanies this story, along with birds he’d still like to take.

Many of his birds have been mounted and are in elaborate displays in his home on Georgia Mountain. Matt also builds furniture and he has custom built cabinets, coffee tables and more than hold his prizes. They’re museum quality displays.

Matt got his start in the hunting world as a deer hunter, but his family lost its place to hunt and he didn’t hunt for a couple of years. He worked at Bunch Pharmacy during high school and while in college at Snead. Pharmacist Buddy Bunch’s son Adam is a serious waterfowler and Matt went duck hunting on the lake with Adam a few times and enjoyed it.

He kept on hunting locally, but soon broadened his horizons. He works in R&D with Wayne Farms’ further processing unit. He started saving his vacation time every year to take a waterfowl-hunting trip out-of-state.

“It has gotten to where we make vacations out of these trips,” Matt said.

For instance, he’s already planning a trip next year to hunt “Mexican mallards,” a mallard subspecies, in Arizona.

“We will hunt a couple of days and we will sightsee a few days,” Matt said.

Rachel said she enjoys seeing Matt do something he enjoys so much.

Shane Smith, the Jackson County taxidermist, is a good friend of Matt’s and has helped him set up many of his hunts.

“I took him a goldeneye in 2009,” Matt said. That started the quest for Matt. He saw some of the birds other people had brought to Shane from out of state. Matt then began his own planning with the help of Shane.

He began making a list of birds he’d like to take and places he’d like to hunt. The goal was to take a hen and a drake of most of the species of waterfowl across the continent.

He has been to St. Paul Island, an island in the Bering Sea in Alaska, to hunt sea ducks twice, taking king eider and oldsquaw.

There was quite an epic 7-day trip to hunt Massachusetts, Long Island and Delaware. Scoters, eiders and oldsquaw were on the menu that trip.

“They were very rare for a long time,” Matt said. “But some came over from Russia and now there’s an established population in North America.

Matt has incredible vision to be able to see and identify ducks and that was particularly important in the hunt for the Eurasian widgeon.

“You’re picking out a special bird among a bunch of regular widgeon,” he said. “It’s not easy.”

The hunt for the cinnamon teal involved padding a kayak around a huge salt lake and flushing and shooting the birds. He got 8 of them.

Because of the distance and expense, Alaska requires at least 2 or 3 years of planning and saving, Matt said. It’s two days of travel just to get there.

“You go from here to Anchorage,” he said. “Then it’s a small plane to St. Paul, Island. Every ounce is carefully weighed so the plane is not overloaded.”

He said it’s critical to keep an eye on the weather in Alaska. On one of his recent hunts there, he got his 8 sea ducks – the most a non-resident is allowed to take in Alaska – pretty quickly. A storm was coming in and he made the decision to fly back to the mainland early, even though he had 2 days left on his trip.

“If I had not done that, it would have been 10 days before I could have gotten off the island,” he said.

Matt has learned all about traveling with guns and with dead birds.

“The gun in a case is just another piece of luggage,” he said. “You will have to open it up for TSA to inspect it.”

To bring his trophy ducks home, he freezes them and puts them in a cooler in his carry-on luggage.

“I get stopped and asked about it in the airport every single time,” he said. The dead ducks show up on the X-ray as it makes its way through the boarding process.

He has taken sandhill cranes in Tennessee and tundra swans on Currituck Sound, North Carolina.

“Rachel got the biggest swan on that trip,” Matt said. “She did it with a 20-gauge.”

He’s killed all kinds of geese in Arkansas, although he still needs a greater blue. He and Rachel have hunted the spring conservation season up there where you can hunt with an unplugged gun and electronic calls.

He has taken the Florida mottled and coastal mottled duck in Florida.

He is excited about the Mexican mallard hunt coming up.

“One thing I’ve come to really enjoy is desert hunting,” he said.

He has made a ton of friends across the country during this quest as you might imagine. Many of them have him to their places to hunt with them at various times. He’s got a buddy in Texas he likes to hunt with at least every couple years.

He has hunted the Rio Grande River in Texas, the border with Mexico.

He didn’t see anyone try to cross illegally but there was a goat herder on the Mexican side.

“Border Patrol arrived pretty quickly to make sure he was just a goat herder,” Matt said. The Border Patrol agents ended up telling Matt where they'd seen ducks in their patrols.

There’s never been a hunt that was a “bust.” But there have been some that went down to the wire.

“There have been several times he didn’t get his birds until the last day of a hunt,” Rachel said.

It took him a few trips to the East Coast to get the greater black ducks he sought.

He and Rachel always like taking in the local cuisine on their trips.

Rachel loved the crab cakes in Maryland, saying there was nothing like them.

They also love visiting classic diners in their travels.

The Smyrna Diner in Delaware was a favorite with some of the best food they’ve eaten on a trip.

On St. Paul Island, the locals are very self-sufficient. Matt and Rachel enjoyed halibut pie and reindeer sausage there.

“Halibut has become one of my favorite dishes and I’ve made halibut pie for our friends,” Matt said. “We love it.”

Matt has done most of his duck and geese killing on these trips with a single gun – a 3.5-inch 12-gauge Benelli Nova. And this one has quite a story.

“They’re not expensive guns,” Matt said. “I bought this one when I was in college at Auburn.”

And the gun once spent some extended time on the bottom of the Flint River in Madison County.

“I went hunting with Adam Bunch up the Flint River when it flooded when I was in college,” Matt said. A tree limb snagged the sling on his gun, pulled it out of the boat and into the murky depths. It was January and cold.

“I dove in after it,” Matt said. “I was a college student and without that gun, my season was over. I didn’t have the money to replace it.”

The water was much, much deeper than he thought.

When he came up, he marked the spot by taking off his soaked long johns and tying them around a tree. He later returned to the spot with a grappling hook, a large magnet and his friend Jake Atkinson.

“There were some guys set up there hunting,” Matt said. “I told them I was sorry, but my gun was somewhere under my boat.”

Jake caught the sling with the grappling hook on his second throw. Today, his gun rides to the hunting spot in a floating gun case.

One gun, 46 species and 17 states later and the quest shows no signs of slowing down for Matt. He has bought a Super Black Eagle autoloader, but he still takes the old Nova on his travels and makes sure to bag at least one bird with it before he gets out the automatic.

“There are still some subspecies and some odd birds I’d like to get,” he said.

So the hunts will roll on.