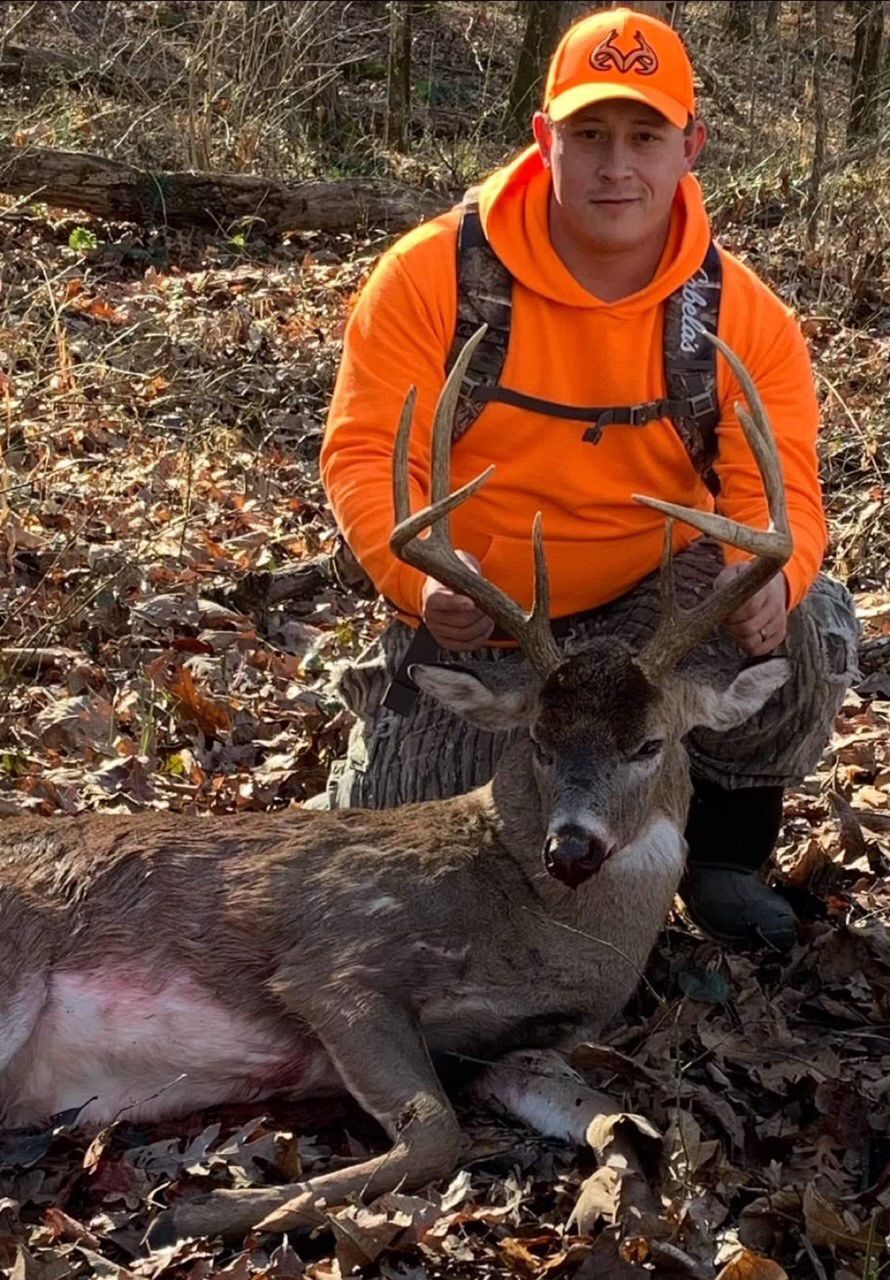 Tyler Black hunts Jackson County, where the rut starts a little earlier than Marshall, and he got this beautiful buck there. 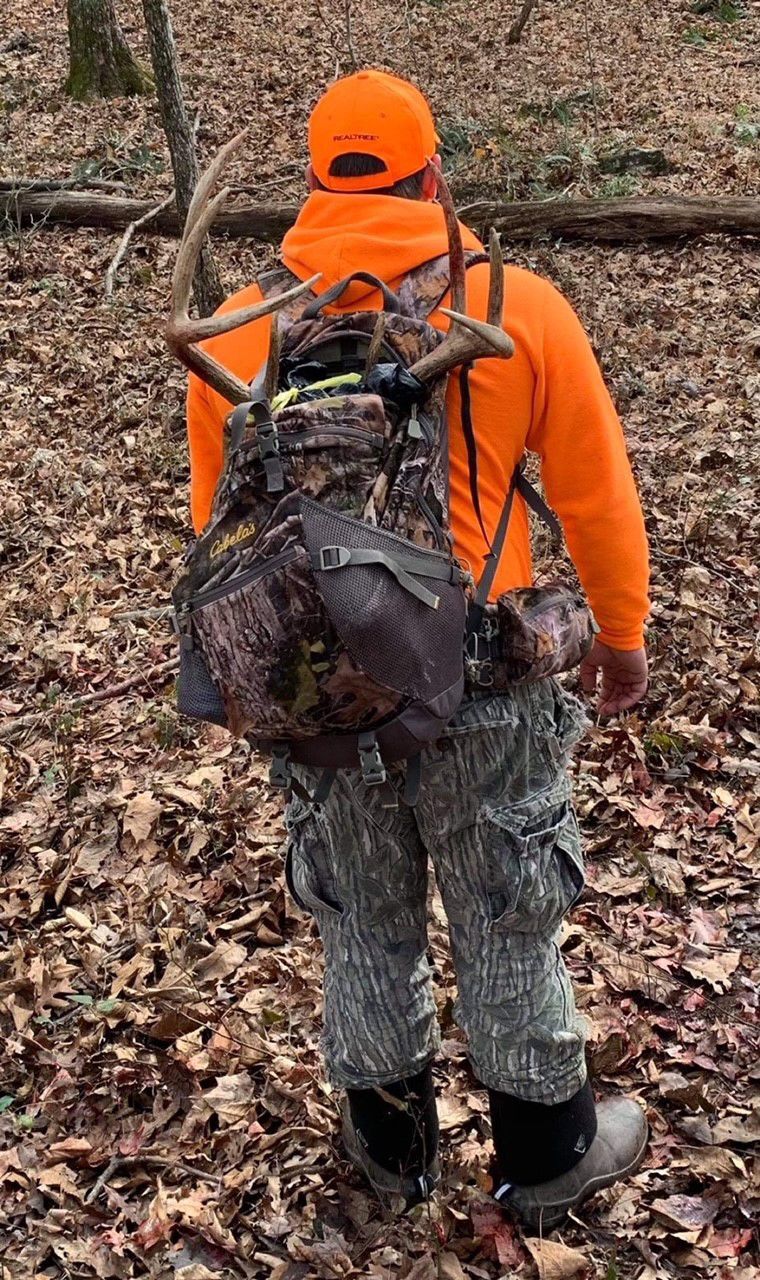 Tyler Black packed 2-1/2 miles into rugged territory to take his buck. You don't just drag one out in that situation. You cut it up where it falls and pack it out.

Tyler Black hunts Jackson County, where the rut starts a little earlier than Marshall, and he got this beautiful buck there.

Tyler Black packed 2-1/2 miles into rugged territory to take his buck. You don't just drag one out in that situation. You cut it up where it falls and pack it out.

From now until the end of January should be the best deer hunting of the season for much of Marshall County.

For the avid deer hunter, the season is long, with archery season opening October 15, gun season opening Nov. 21 and all of it running from then through Feb. 10.

The rut or whitetail breeding season runs the last 2 to 3 weeks of January over much of the county. While it’s no guarantee of success, normally reclusive bucks are on their feet just a bit more and deer in general are more active. It means hunters are more apt to see deer, especially rack bucks. It is arguably the best part of deer season.

My longtime friend Bert Phillips – a big buck master – gave me a few tips last year, namely to re-arrange my schedule and hunt every morning and evening I could during the last 2 weeks of January, even if it was only an hour or half-hour in the morning and afternoon. It was a terrific tip. I followed it and had my best January ever last year.

I’ve often said if you could only hunt 2 weeks of the long season, you could do much worse than to pick the last 2 weeks of January.

With all this in mind, it seemed like a good idea to ask several deer slayers from around the county their tips on hunting the rut. We asked each of them to give us 3 tips for rut hunting.

Here’s what they said:

Ross St. John of Georgia Mountain is a big buck hunter as well as an avid waterfowler. He offered these tips:

1. Hunt where the does are.

3. Spend as many hours as possible in the stand.

Bart Muse, the superintendent at Gunters Landing Golf Course, was in the paper for killing a big bull elk out west earlier this year. But he is a superb deer hunter as well. he offered these tips:

1. Hunt the back side of the full moons, here I think it’s the next full moon.

2. If weather aligns up good with the new moon, it’s also good time to be in the woods for rut!

3. Hunt the cold fronts moving in, and high pressure!

Mark, a realtor, is Bart's buddy and an accomplished local deer hunter. His advice mirrored Bart's:

1. Hunt the back side of the full moon;

Clay of Clay Irrigation makes a midwestern tour every November (those deer rut in November) but also has good luck hunting his own place in Marshall County in January. He offered these nuggets:

1. Hunt the doe travel corridors heading back to bedding areas in the morning If in the mountains. I like the mid to upper elevation benches usually heading to the south facing slopes. I’ve taken 90 percent of my bucks in the morning

2. Don’t forget the wind. The noses of nature does have saved the lives of many mature rutting bucks.

3. Hunt late in the morning and be in the stand early in the afternoon if at all possible. I archery hunt all season long and depend on those cruising bucks - particularly from 8:30 to 10:30 a.m. - to get that “up close” shot opportunity.

I have only been in a tree 4 times in Alabama all season but I’m planning on dedicating several hours over the next few weeks. Good luck to all my fellow outdoorsman. Enjoy what God created and get a young person out there with you.

Bert is having a heck of a season and has already taken a mature buck. His tips are:

2. Hunt as many hours in the stand as you can, even midday.

3. Believe in yourself (listen to your gut feelings)!!!!

Andy is a forester and an avid bowhunter.

“Bert is relentless,” Andy said. “I think that’s a tip. Be relentless!”

Kirkpatrick, who lives at Point of Pines, manages a deer hunting property in Madison County. He offered this:

2. Stay close to the doe herds.

My own brother Mitch Campbell hunts a lot in January and offered a somewhat off-beat tip. He hunts almost exclusively off the ground.

“The most revolutionary thing I’ve done in the last 10 years is cover my face,” he said. A shiny face can give you away quickly to the sharp eye of a deer. I started wearing a face covering myself 3 years ago myself and can't imagine hunting without it.

“Let your does do what they are going to do this time of year,” Mitch also said. “They are your bait. Watch their body language closely.”

A good friend serves as something of an outdoor mentor to me. He has killed two bucks over 155 inches in Alabama and 4 in 4 seasons scoring between 146 and 155. He didn't want to be named but he offered these tips.

“You are hunting does...because the bucks are hunting does. Be in a high doe traffic area; but one you can have time for a shot opportunity once the does bust ahead of the oncoming buck,” he said.

“Be particularly alert for the doe that all the other does don’t like. They don’t like her cause she’s in heat. Pay attention if a lone doe shows up that’s nervous, looking behind her.

“Pay attention,” he continued. “When does' heads go up, focus on that spot. If it’s tight shooting lane, it’s not a bad idea to have gun shouldered if they are really focused on something. When it happens, it happens fast.”

The only thing I would add that hasn’t been mentioned already is to carry some deer noise makers with you, namely a grunt call and a "can" call that emulates a doe bleat.

The last buck I got last year, I heard grunting in the woods. The can requires you to turn it over 3 or 4 times and each turn produces a bleat. I used the can and within 15 or 20 minutes, last year's buck was 50 yards in front of me. I really couldn’t believe it, but you want to have a way to make deer noise this time of year.

Danny Jordan, the avid deer hunter and taxidermist from Claysville, perhaps summed up rut hunting the best: “Expect anything!” he said.

Seasons of the Deer

For probably 15 years, I wrote the two-part “Deer Outlook” for Alabama Game & Fish magazine. The first part told about places in the state with the most deer; the second part about where and when the better bucks were taken.

I pored over the books “Alabama Whitetail Records” and interviewed scads of state biologists and successful hunters.

The thing I noted – and my own anecdotal evidence backed it up – is that there are 4 peak times for deer hunting in a season. Big buck hunting also coincides with those times.

Bow season (Oct. 15 to roughly Nov. 20). The deer haven’t been messed with since the previous February and you will see good numbers of deer, albeit most will be does and fawns. My bowhunting mentor, Andy Beasley, often takes a nice buck during this time frame too.

Opening week of gun season (the Saturday before Thanksgiving through the holiday weekend). Again, the deer haven’t been messed with much. It’s a really good time to see deer and maybe take a nice buck.

Christmas week (the weekend before Christmas through New Year’s). I don’t know what it is about this time frame, but it is just a really good time to hunt.

The rut (the last 3 weeks of January). This is the peak movement time of the year for deer in general and more nice bucks are taken at this time than any other.