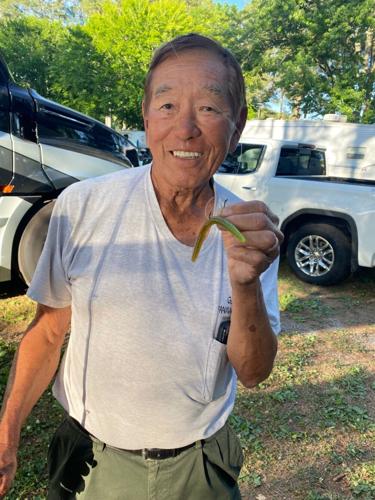 Gary Yamamoto is shown with his signature bait that he invented and popularized, the Senko. At age 79, he is still fishing tournaments. 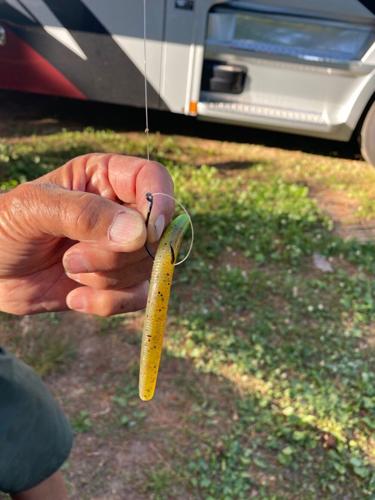 Gary Yamamoto likes to make a homemade weed guard for his whacky-rigged Senko with a piece of 25-pound monofilament stuck in the knot. 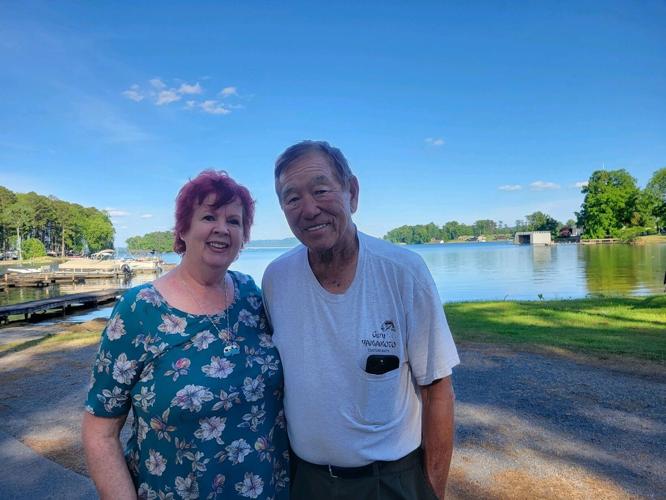 Cindy Yates, an unofficial ambassador for Guntersville, made friends with Gary Yamamoto while he was here.

Gary Yamamoto is shown with his signature bait that he invented and popularized, the Senko. At age 79, he is still fishing tournaments.

Gary Yamamoto likes to make a homemade weed guard for his whacky-rigged Senko with a piece of 25-pound monofilament stuck in the knot.

Cindy Yates, an unofficial ambassador for Guntersville, made friends with Gary Yamamoto while he was here.

It’s not often you get to meet a person who literally changed a sport, but it happened for me the other day.

My pal Cindy Yates had met and befriended Gary Yamamoto during the MFL Pro Tour bass tournament held here a week or two back. Gary was staying in his motorhome at Riverview Campground. She insisted I come out to meet him and I’m glad she did.

Gary invented the Senko, a soft plastic bait that is just a fish catching machine. It’s one of those baits that you really can’t fish wrong. You can Texas rig it, Carolina rig it, whacky rig it, drop shot it, you name it. It was truly a revolutionary bass bait.

“We knew we were onto something when someone trying it out came back after fishing for bedding fish and told me you didn’t have to get it close to the bed, fish were coming out 5 feet to get it,” Gary said.

The Senko has been imitated by many other companies, but Gary said none are quite like the original.

“We still handpour our baits,” he said. “A lot of the other companies are mixing their plastic in 55-gallon drums.”

The Senko had immense success – and continues to have success – in the fishing market. So it’s an understatement to say Gary has done well in business. But he still showed us a few tricks on rigging it that can save money.

While lots of anglers employ spinning gear for their Senkos, Gary fishes his on a medium baitcaster. He uses 20-pound braid and a florocarbon leader. Braid lasts practically forever, so all you have to replace is the leader.

“And I can’t afford line,” Gary said with a straight face.

He showed us another trick too. Sometimes, your Senko needs a little weight. A common practice is to put a nail weight in one end of a whacky-rigged Senko.

“Tungsten nail weights are very expensive,” Gary said. He uses soldering wire – the kind without flux – and simply trims a little piece of that and shoves it in the end of his Senko.

The other trick he shared was to insert a piece of 25-pound monofilament in the knot when tying on your hook for your Senko. It makes a cheap, easy weedguard for the hook, something that’s a definite plus on Guntersville.

Gary is 79 years old and still travels the country fishing tournaments. He’s been to Guntersville many times, but he re-acquainted himself with the lower end – the Guntersville end – during the tournament.

He said a lot of guys were using Senkos during the tournament and that it is very humbling to get beat by guys using your bait.

Gary caught some fish around docks on Senkos, but said he messed up. He caught one or two nice ones in between the docks. One of the patterns during the MLF Pro Series was fishing bream beds. Big bass often prowl the bream beds in May for easy pickings.

“I should have fished the bream beds,” he said.

“That will just about cover my expenses for coming,” he said. He went out fun fishing the day after he was eliminated from the tournament and caught a 6-pounder.

“I would have made the cut if I had caught that fish during the tournament,” he said.

In addition to meeting new friends Cindy Yates and Skip Dietz, Gary reacquainted himself with Kotaro Kiriyama, a bass pro from Japan who now lives in Guntersville.

“Gary was someone to look up to when I was growing up,” Kotaro said. “It’s great to see him again.”

Kotaro himself likes to give back to the Japanese anglers, many of whom would love to fish in the United States. He holds a tournament every year and brings the winners to the U.S. to fish. It is enormously popular.

When Gary isn’t fishing, he has a 750-acre ranch in Texas where he raises about 600 head of cattle. 300 or so are processed each year for wagyu beef.

There are 8 bass ponds on his property.