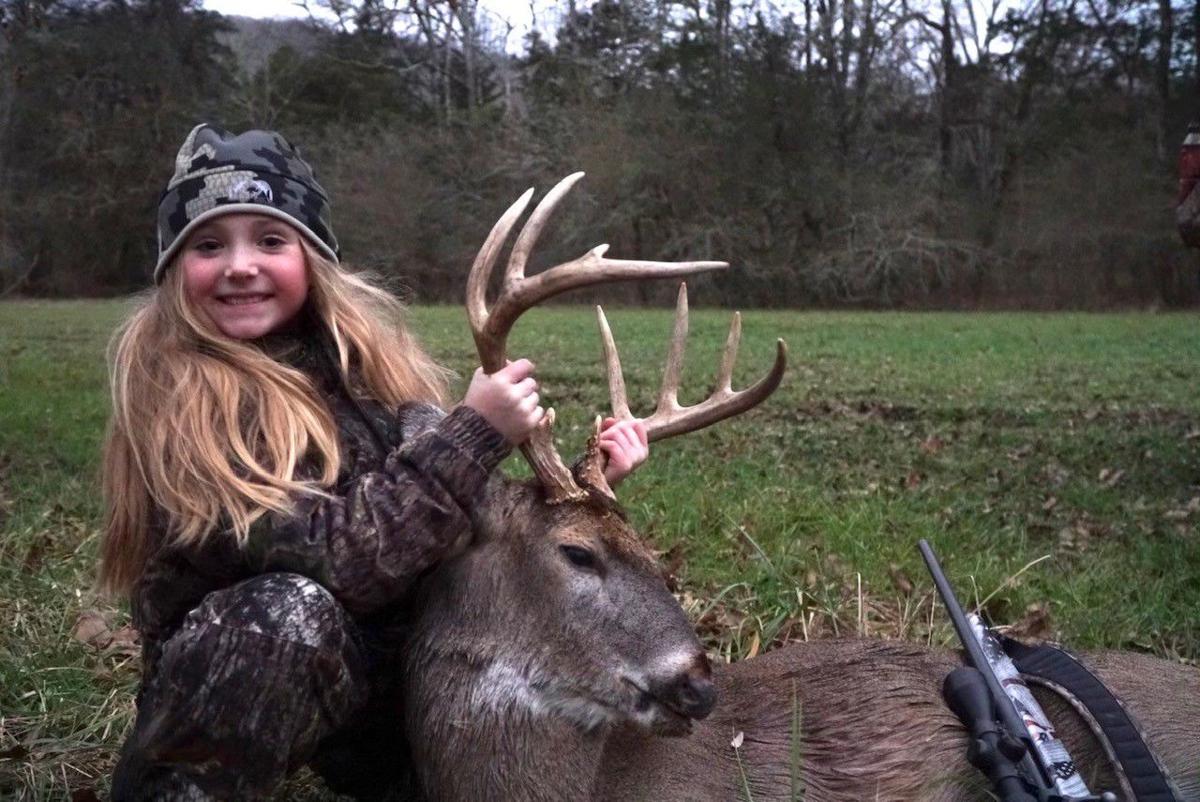 She passed up does and small bucks throughout the season and it paid off for Ella Clay. She got this mature 10-point near the end of the season. 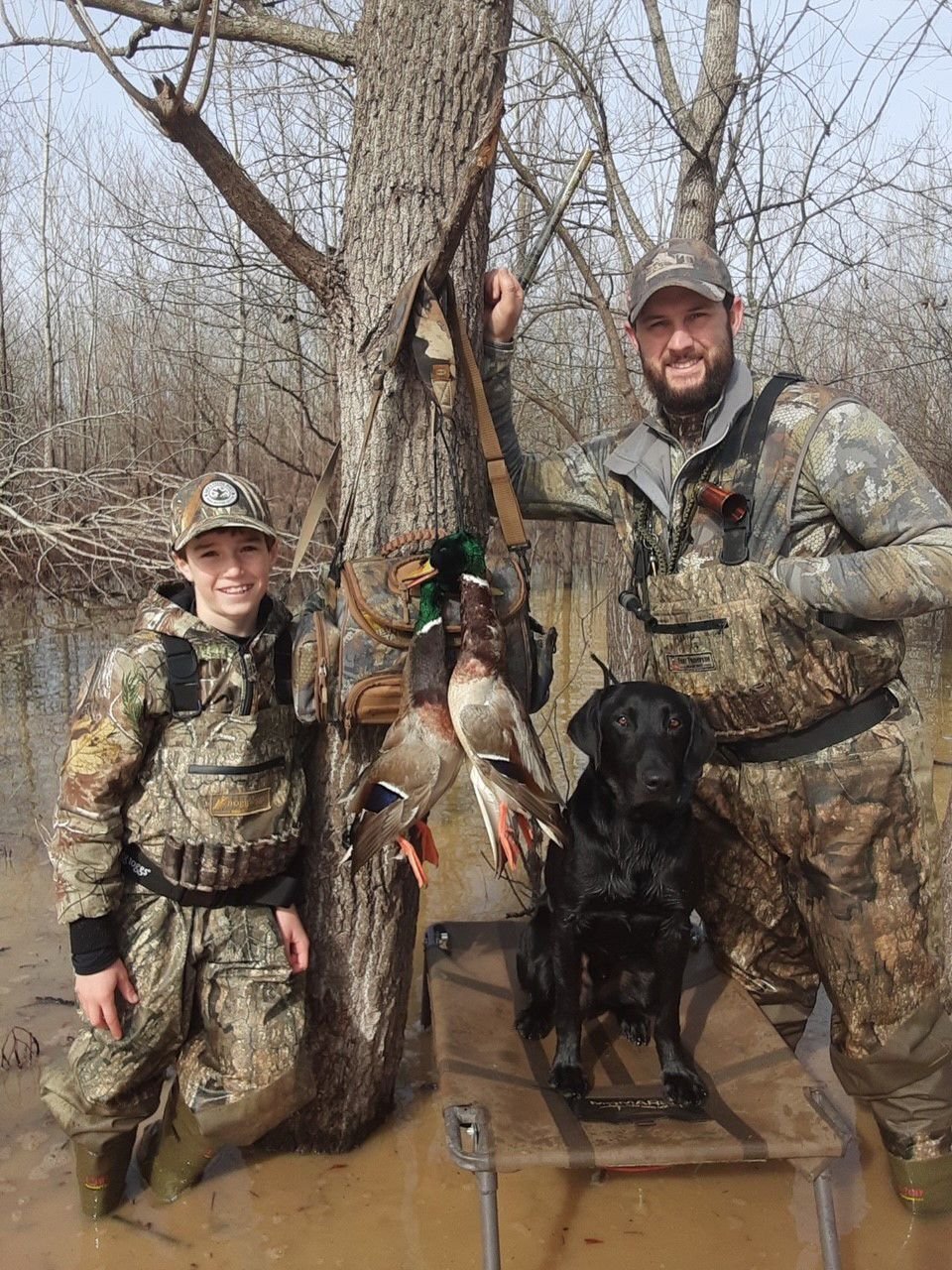 Dee Tully got some nice greenhead mallards on the youth hunt in Arkansas. He was hunting with Ben Bradley, son of Guntersville Church of Christ minister Phillip Bradley.

She passed up does and small bucks throughout the season and it paid off for Ella Clay. She got this mature 10-point near the end of the season.

Dee Tully got some nice greenhead mallards on the youth hunt in Arkansas. He was hunting with Ben Bradley, son of Guntersville Church of Christ minister Phillip Bradley.

You don’t necessarily have to be an “old salt” to be a success in the woods and on the water. Just ask Ella Clay and Dee Tully.

Ella, 9, the daughter of Chris Clay, hunted all season. She passed does and small bucks and her patience was rewarded handsomely at the very end of the season when she bagged a mature 10-point buck.

Dee, 10, is the son of Jeff and Susan Tully. He’s almost like a grandson to Philip and Kim Bradley. Kim started keeping him when he was just 5 months old and he’s grown up practically a member of the family.

He enjoys hunting with Bro. Philip, the minister at the Guntersville Church of Christ. He’s taken deer and hogs with him before. On the first weekend of February, he and Bro. Philip traveled to Arkansas for the youth duck hunt and Dee bagged mallards in the Raft Creek bottom adjacent to the White River.

These are their stories:

Ella and Chris had hunted together a good bit over the course of the season. She passed up a bunch of does on the youth weekend.

“She passed up some smaller bucks on into the season,” Chris said.

Ella actually started hunting last year. But she was really ready to go this year. She had more confidence, Chris said.

Near the end of the season, Chris and Ella got in a box stand in an oak tree. But Chris realized pretty quickly they had a problem.

“We’d been there 15 or 20 minutes and I realized the rail was too tall for Ella,” he said. “She would just about have to stand up and bend over to be able to get a shot. It would be very hard to get a good steady shot.”

His son Jack was in a different stand. Chris sent Jack a text message, told him what was going on and asked if they could change stands.

The other blind was perfect. The seat was the right height and Ella could get a good steady shot.

The buck was only about 60 yards out in the middle of the food plot. But he turned and came even closer to the waiting Clays.

“He turned broadside at 45 yards and Ella made a good shot,” Chris said. “She got it done. I was proud of her and Jack was even prouder.”

It was about the 30th “first deer” taken on Chris’ farm.

Now Jack wants to get Ella on a turkey. The season starts March 20, with a special youth season next weekend.

As mentioned, Dee Tully is practically like a member of the Bradley family. Back in the fall, Philip’s son Ben told Dee that Arkansas has a special youth season the week after the regular season goes out and he suggested Dee should come out.

“Deer season was still in,” Philip said, “but we had been tentatively planning this and we opted to go to Arkansas.”

He said the Arkansas rules also allow military veterans to hunt that weekend, making the hunt even more special.

“There was a lot of activity and a lot of birds stirring that morning,” Philip said.

Dee had practiced on the skeet range prior to the hunt with a 20-gauge, but he ended up hunting with Ben’s Benelli 12-gauge.

“It was a good thing too,” Philip said. “It’s late season. These birds came in high. They don’t work as well as they do earlier in the season.”

Dee ended up getting 2 pretty greenhead mallards. He’s having one of them mounted.

“We took him deer hunting last year and he killed a big old deer,” Philip said. “This year we went hog hunting and he shot a couple of hogs. Whenever he gets onto something, it means a taxidermy bill for his parents. I told them they couldn’t blame us for getting him hooked on ducks. That was Paul Moultrie. Paul took him to his grandfather’s pond and he killed some beautiful wood ducks. He’s having one of those mounted.”

Philip has duck hunted some over the years, but not avidly. But Ben loves it. Ben lives in Searcy, Arkansas, and hunts nearby. And he field trials a Lab named Wallace who was on hand to fetch Dee’s ducks.

The dog is named after William Wallace, the hero of the movie “Braveheart.”

“His Uncle Buddy calls it ‘the enchanted life of Dee,’” Philip said.