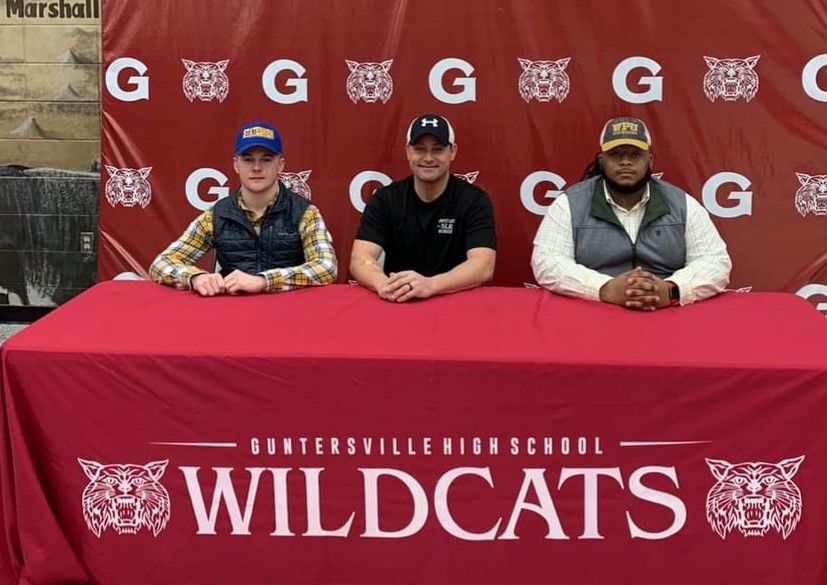 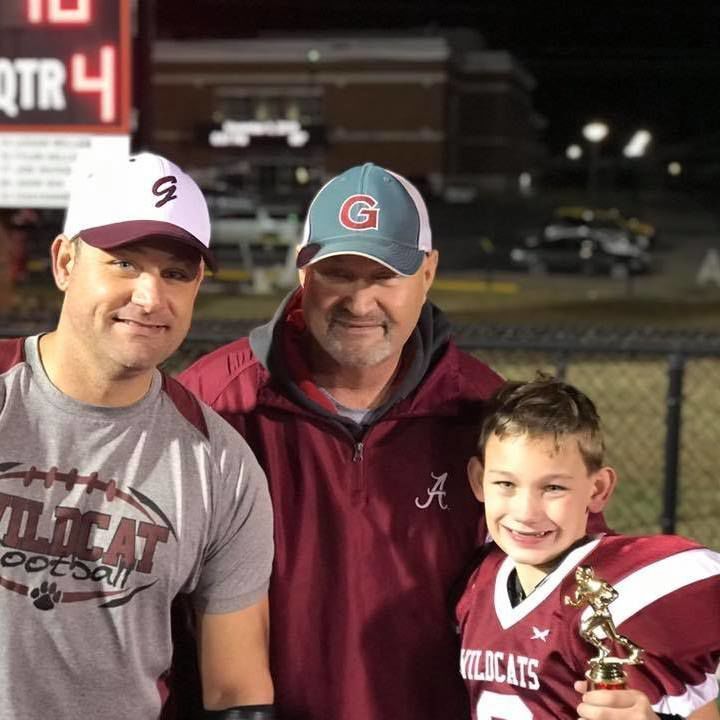 Scott Smith is shown with his dad, Jerry, and son, Street, after one of Street's peewee football games (that Scott coached) from a few years ago.

Scott Smith is shown with his dad, Jerry, and son, Street, after one of Street's peewee football games (that Scott coached) from a few years ago.

He’s been involved in sports in some capacity since he was eight-years-old, but Scott Smith of Guntersville never thought his passion would one day translate into helping students find athletic opportunities through his business, Street Light Recruiting.

A teacher’s aide and football coach at Chambers Academy in LaFayette, Alabama, at the time, Scott, a single father with sole custody of his son, Street, knew he needed something different out of his career. He didn’t have the time necessary to devote to the recruiting side of coaching.

“I was helping do videos and recruiting for some of our players during that time,” he said. “I was mailing out DVDs and I felt like I was working all week to send them to maybe 30 schools. And what if I sent them to the wrong schools? There were 810 programs in the country and I thought there was no way to get these videos to all of them.”

One of the players he was working with during that 2008 season was his younger brother, Ryan, a senior in high school at the time.

“I didn’t have time to do recruiting at all,” he recalled. “I knew I couldn’t keep coaching and doing what I was doing with Street, so I tried something one day with my brother. And what I tried that day is 90% of what I still do now.”

Scott began building what amounted to a comprehensive database of phone numbers and email addresses for every college coach in every school. Instead of the painfully slow process of mailing DVDs, he began curating and emailing highlight reels of his athletes to coaches around the country.

“A video of an athlete to a college coach is basically like a resume for a job interview, so it’s important,” he explained. “They want to know if you have the tools necessary for what they’re looking for.”

For over a year, Scott had been mailing DVDs of his brother to select schools, only hearing back from one. The same afternoon he began emailing film, 15 coaches contacted Ryan during the school day.

Through Street Light Recruiting, Scott has helped around 1,800 kids from 47 states, as well as Canada, find athletic scholarships to colleges and universities throughout the U.S. With an ever-expanding database -- he currently has cell phone numbers for over 6,000 college coaches across the country -- he’s grown his company through word-of-mouth alone, something of which he is very proud.

“It all started with that first graduating class of 2009,” he said. “And it just worked out well because I couldn’t have kept going to school and coaching at that time. So, God just blessed me with the ability to be at home and still help kids get opportunities.”

While he owns his own business, he’s a self-described “football guy who learned business,” not the other way around. His passion for his young clients stems from a dynamic background in athletics and his own experiences with sports, both good and bad.

A high school quarterback on the football field and a pitcher on the baseball mound, Scott grew up playing sports in his small hometown of LaFayette. He had several college scholarship offers, but ultimately went to pitch at Chattahoochee Valley Community College in Phenix City, Alabama. The transition was difficult for him, though, and in hindsight, he realized he was too close to home: Scott flunked out after only the first semester there.

“I went to a small private high school, with only 30 people in my graduating class,” he said. “In baseball, I threw 90 miles per hour; people talked to me like I was Nolan Ryan. I get to college and get in our first bullpen and the 15 other pitchers there are throwing 90, too. I realized then how big a world it really is.”

Scott made the move to Snead State Community College the following spring, where history repeated itself. Homesick and defeated, he returned to Chambers County. He sat out for a year, taking the opportunity to heal an injured elbow. When he was ready to return to baseball, he made the decision to play at Stillman College in Tuscaloosa, an Historically Black College and University (HBCU).

Further from home and without the usual distractions, Scott played better than ever. He made Division II All-American his first year there and held the sixth lowest ERA in the country. The following year, he hurt his shoulder, which brought his baseball career to a close. Trying to finish his degree in history, he paid for one semester of school on his own, the only time in college he ever made all As, before it became too much with helping to coach the high school football team at Chambers Academy and gaining custody of his son.

“I was only taking part-time classes online and I had about a year a half left to finish my degree,” Scott said. “And I just knew there was no way I could finish. I know there are probably a lot of people who could have done it, but not me. I was 30 minutes from my family and I was doing everything myself; I did all the bottles in the middle of the night, diapers and everything. It was an interesting experience.”

Scott considers becoming a single father to his son, Street, the best thing that ever happened to him.

“Seeing him grow up has been the pleasure of my life,” he said. “People always say that he looks like me and acts like me. I always tell people that if he is like me, I want him to be a much better version. I want him to be better at everything. He’s a much better student than I ever was. I try to tell him about my mistakes.”

And it was Street who not only inspired his father’s business, but is also the company’s namesake. Street is now a thirteen-year-old student athlete at Guntersville Middle School, playing baseball and football as a quarterback, just like Dad. He’s also on the track team. While Scott doesn’t care where he goes to college or what he goes for, he would like his son to get there on a full ride.

“The way I feel about it is, a full scholarship is telling you as a parent that they’re going to take care of your kid,” he said. “They have money invested, it’s not just babble. So to me, if he gets a full scholarship, I’m all for it no matter where or at what level.”

He feels the same way about his clients. Scott’s job isn’t so much about getting kids into their dream schools, but more about getting them as many opportunities as he can and letting their families decide the best fit from there.

Early on in his career, he helped twin athletes from Valley High School find football scholarships. One twin was all talent and quite possibly the best athlete Scott has come across thus far. He easily received offers from many Division I schools, but narrowed it down to Auburn, Alabama and Cal. When he asked Scott what he should do, Scott answered without hesitation and told him to go to California. The football player instead chose Auburn, where he got distracted with his friends from home and quickly flunked out. He moved on to Troy University, where the same thing happened, this time ending both his football and his academic career.

His twin brother, on the other hand, was not nearly as talented and ended up at a junior college in California, where he used his Pell Grant to pay for school because he was not on scholarship. He worked hard, made All-American and was subsequently signed to Arizona State University on a full scholarship, where he earned his college degree.

Scott has seen over twenty of his clients make it to the professional level over the years, but he claims that his favorite stories are of the lesser-known athletes he’s worked with.

In his spare time, Scott has enjoyed being involved in his son’s sports, although this year marks the first time that he hasn’t coached on any level since Street now plays for the school. In the future, he would like to be able to apply his experience at the school level in some capacity, should the need arise.

Scott knows the influence a coach can have on a young man, recognizing his own high school coach as, aside from his father, the single most influential person in his life. He credits Ken Fordham with making him a “more mentally tough individual.”

“I don’t need to be paid; I would love to do it just to see the kids get proper instruction,” he said. “I miss coaching, but other than coaching, I honestly can’t think of anything else I would rather be doing than helping kids get opportunities.”

His plate nearly always full, he admits he couldn’t do it without the constant support he receives from his wife, Jill, and his parents.

“I couldn’t do what I do without Jill,” he said. “The support she gives me is amazing. And my parents have always helped me. I wouldn’t have anything without them.”

His coach growing up and a constant fixture at all of Street’s sporting events, Scott’s father, Jerry, passed away unexpectedly from COVID on November 24, 2020.

“I remember talking to my Dad on a Saturday night, watching the Clemson game,” Scott recalled. “He sounded as vibrant as I had ever heard him. A week and a half later, he was on a ventilator. And then he was gone. He was my best friend. I miss talking to him.”

Usually #11 in all of his sports, which was his dad and uncle’s number, Street chose to wear his grandfather’s #24 this baseball season in honor of his Papi.

It’s certainly been a tough season for the Smiths, but Scott remains more determined than ever to continue to help as many student athletes as possible with Street Light Recruiting.